Museo Reina Sofia – together with the Museo del Prado and Thyssen-Bornemisza constitute the “Golden Triangle of the Arts” Madrid.

Museo Reina Sofia in Madrid (full name Museo Nacional Centro de Arte Reina Sofia) is the second most visited museum in the country. It is of interest to those who are indifferent to the paintings and sculptures of the 20th century.

The hit of the museum is Guernica by Pablo Picasso, and a nice bonus is the paintings of Salvador Dali and the famous Spanish Suprematists.

History of the Queen Sofia Museum

The museum building used to be a major hospital, and since 1986 it has hosted the city’s famous exhibitions of contemporary sculpture. In 1992, the Museum of Art was officially opened in Spain.

Initially, it was decided that the museum’s collection would consist of works by Spanish artists and sculptors of the 20th century.

The museum building is an unusual blend of the eighteenth century and the latest in architecture. The result is an amazing eclecticism of styles, combining different building materials and playing with the space and layout. The foundation of the museum, the hospital building and the annex by the modern architect, Jean Nouvel, look very harmonious.

It’s nice that among the museum’s exhibits, there are separate halls dedicated to Soviet avant-gardism. You can see works by Lyubov Popova and Alexander Rodchenko. Picasso’s famous painting “Guernica” is the most famous exhibit. In one room with the painting are its future sketches, you can trace how the artist created his masterpiece.

There is a free library in the museum building, where you can freely thumb through your favorite art books. And on the third floor there is a beautiful observation deck with a panoramic view of the city.

The ticket price is 8 euros, with an audio guide it is 12 euros. There are days of free admission, but it is better to check on the official website of the museum, they change from time to time.

The Reina Sofia Center for the Arts is one of the most visited museums in the world, located in Madrid. In less than 40 years it has managed to transform itself from a mere art center into a world-renowned museum, housing the most famous paintings and sculptures of the 20th century. 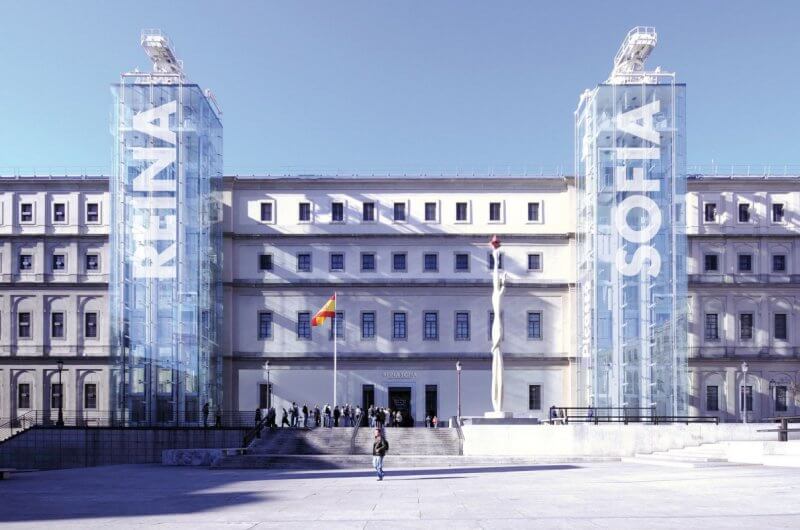 The Centro de Arte Sofia is Madrid’s national museum and includes a library, pinacotheca and gallery. Along with the Prado and the Thyssen-Bornemisza Museum, it is part of the Golden Triangle of Spain’s main city.

Sofia Center is located in the center of Madrid, and each year it is visited by more than 3.6 million people. Interestingly, the museum is included in the list of the twenty most visited art galleries in the world.

Unofficial name of the museum – “Sofido”, because, as in Paris, the Center Pompidou, here is a rich collection of paintings and sculptures of the 20th century (a total of about 20 thousand exhibits). The library contains over 40 thousand volumes. 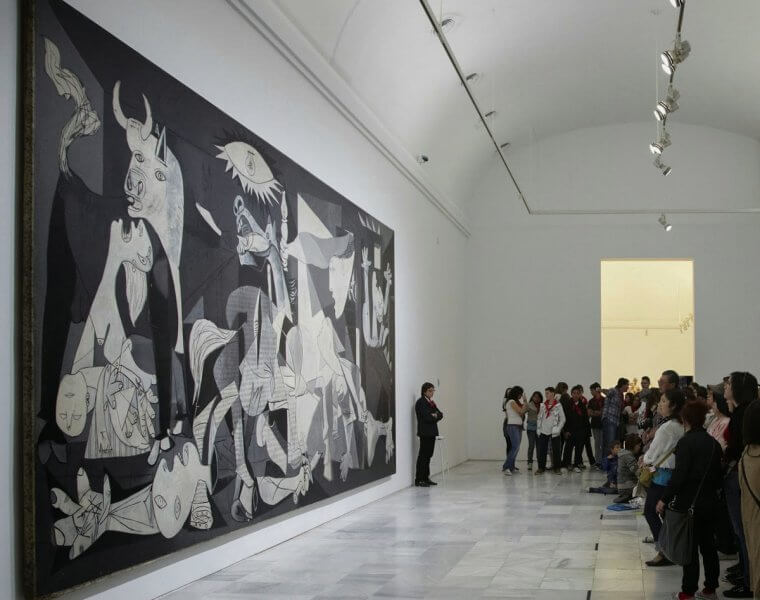 Interestingly, the museum in Madrid often holds lectures for students, and arrange master classes in drawing. Also in the halls of the center you can meet scholars of art.

Sofia Museum of Art was founded in 1986 as an exhibition gallery with priority given to sculptural compositions. It was officially inaugurated only 6 years later by the Royal couple in 1992.

In 1988 the center was given the status of a national museum, and it was decided that the gallery would display only paintings created by the best artists of the 20th century. It is important that the masters must either be from Spain or have lived in the country for a sufficient amount of time.

At the moment, the Queen’s Museum consists of three parts:

The total area of the halls is about 12,000 square kilometers. It is surpassed only by the French Maria Pompidou Center in Paris, with an area of more than 40,000 sq. km. 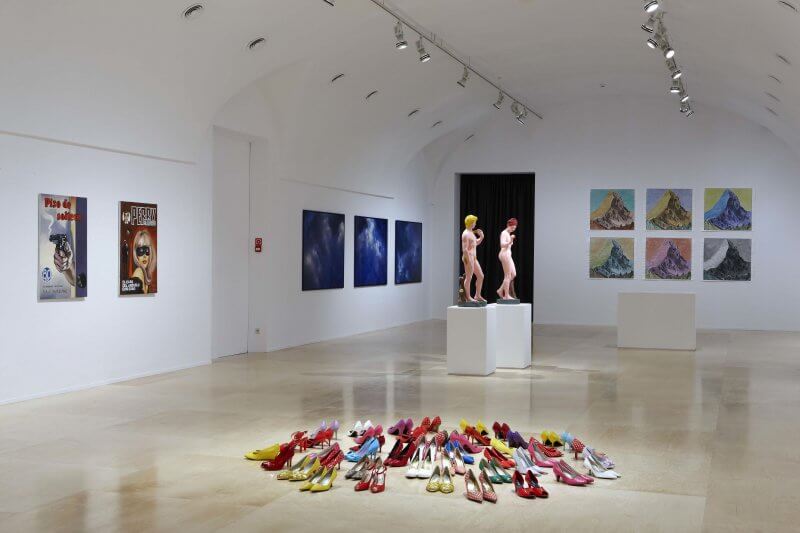 During the year the Museo Reina Sofia in Madrid hosts more than 30 temporary exhibitions, and since it is impossible to describe them all, let us examine the permanent exhibition of the center. It is conventionally divided into three parts:

This is the most depressing and utopian part of the museum, which presents the most complicated (emotionally) and hardest works of art for an ordinary viewer. “The “face” of this part of the exhibition is the painting “Guernica. It was painted by Pablo Picasso in 1937 and is dedicated to the bombing of Guernica during the Spanish Civil War.

Most of the paintings in this part of the museum are in darker shades, which creates that oppressive feeling that the authors of the works wanted.

Postwar paintings and sculptures are much more “light” and bright. In this part of the exhibition you can see a number of works of art belonging to Salvador Dali and Joan Miró. 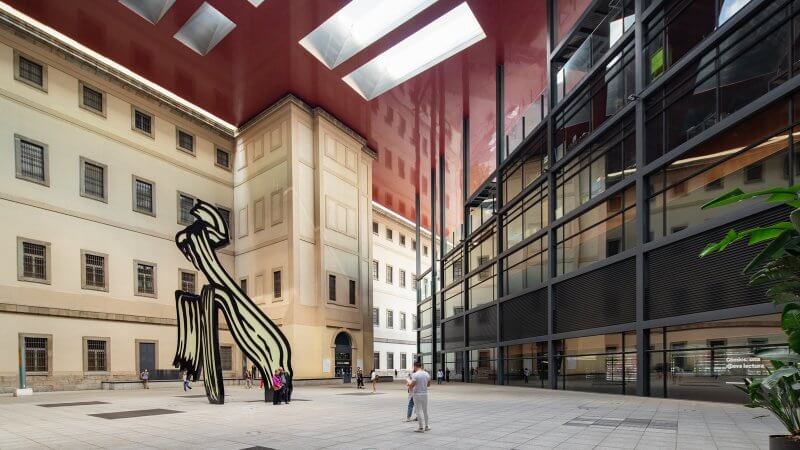 Traces of the recent Spanish wars can still be seen in their paintings, but they are much more succulent and joyful paintings that many visitors enjoy.

The third part of the center with such an unusual name contains paintings by famous surrealists (Togores, Miró, Magritte), avant-gardists (Blanchard, Gargallo), futurists and postmodernists. Among the works of the best Spanish masters one can also find paintings by Soviet artists – A. Rodchenko and L. Popova.

It is the most mysterious and difficult to understand part of the Museum of Queen Sofia – not all visitors can unravel the meaning, which was laid in the paintings.

As for the temporary exhibitions, they are as interesting and varied as the permanent exhibition. Right now the art museum is home to the exhibitions “Women in Pop Art,” “Feminism,” and “Through the Lens of a Camera.” 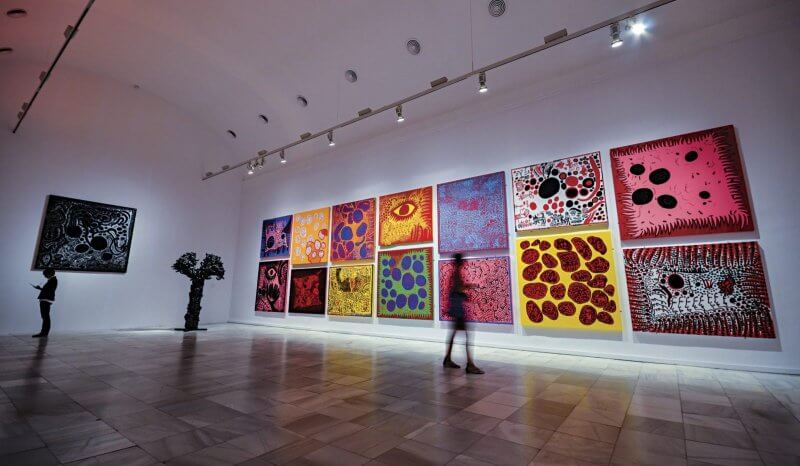 Photos from most of the past exhibitions can be found on the official website under “Exhibitions.”

The prices in the article are for November 2019. 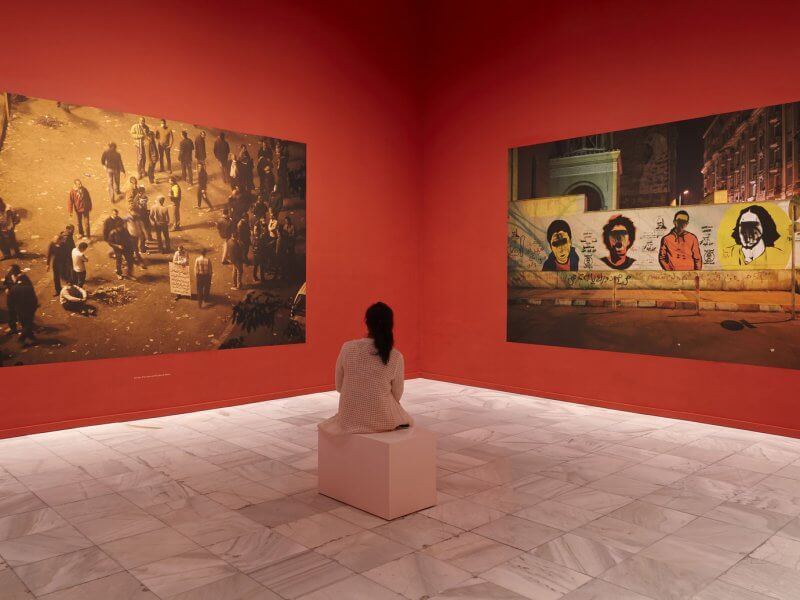 The Queen Sofia Center is the most famous modern art museum in Madrid.

History of the painting “Guernica”:

Updated: 12 Jan, 2020 The Barajas Airport, which receives International flights, is located in the city of…

Updated: 16 Nov, 2019 The City of Arts and Sciences, Valencia is a very unusual…