Museum of Alchemists and Magicians 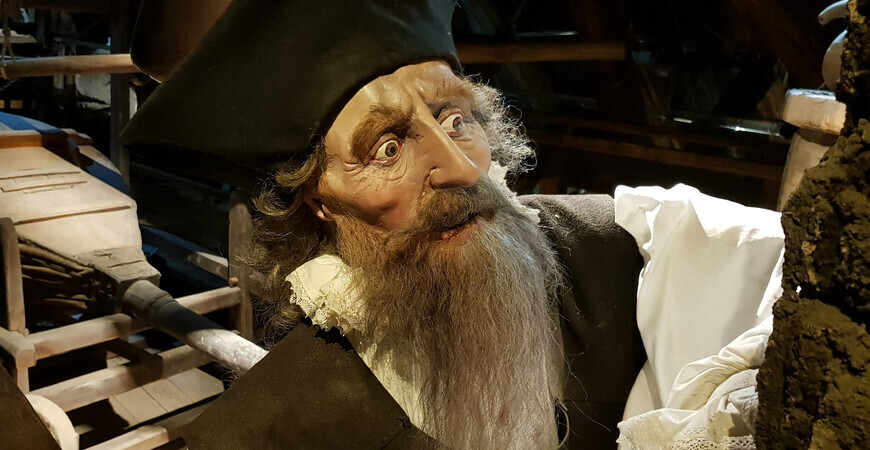 In the capital of the Czech Republic in Prague at the intersection of narrow streets is a mysterious and mystical Museum of Alchemists and Magicians. Quite atmospheric, gloomy and dusty little museum takes us back to the times of Medieval Europe. This is a time not only of knights and the Inquisition, but also of alchemists, whose goal was to obtain gold in unlimited quantities, the elixir of immortality and even the creation of man artificially.

The building where the museum is located was not chosen by chance. It is of historical value. During the Renaissance, this house actually housed an alchemist. His name was Edward Kelly, also known as Edward Talbot. Kelly was a controversial figure of the time. He proclaimed himself a medium, worked on magical research, and claimed to possess the secret of turning base metals into gold. He had patronage from Emperor Rudolph II himself. After his death, Kelly’s name became surrounded by many legends.

The house also has the very unusual name of “At the Donkey’s Cradle.” One legend says that Kelly was very angry when he heard the news that the emperor no longer believed him. At the time, Anna Grdlová, a famous gossip girl, had a terminally ill child and came to ask for help from Kelly, the famous “wizard” of the time. Being in a rage, he conjured up a donkey’s head for the baby.

According to another version, Edward Kelly had his ears cut off, he hid it carefully, as in those days, such a punishment followed for fraud and similar crimes. One day, Anna Grdlova called him from the courtyard, and when the Master leaned out of the window, she saw that he had no ears. Kelly became enraged that his secret had been revealed, and conjured up a donkey’s head for the woman’s child.

But both versions of the legend have happy endings. On Christmas Day, Anna took the child and went to St. Thomas Church, where she prayed before the image of the Virgin until the lips on the image moved. Then the woman looked at the child and saw that it had taken its original form.

The entrance to the house is located at the intersection of Jánský vršek Street and Šporkova Street. Signs above the doors in special script can serve as a landmark, as well as the cow standing at the entrance inside the arch. Once inside we will see two entrances. One leads to the Kellyxir alchemical bar and the other to the laboratory. In the courtyard you can find the ticket office where tickets are purchased. The size of the exhibition complex is quite small. The museum consists of three parts.

On the first floor you can feel like an apprentice and plunge into the magical world by learning about alchemy and alchemists from leading experts, including professors of Charles University, the main university of the Czech Republic. The museum is interesting because it has various interactive exhibits. You can rotate the planets in a model of the solar system, and you can see a device for detecting gold sand particles on your hands.

One of the mysterious places you can visit on the first floor is the room of the house of Faust, the German scientist and witch doctor. A very frightening scene awaits you, in which the scientist is carried away to the underworld by unclean forces. You can also learn the legends of the alchemists and see the sights of Prague.

The next exhibit area, Kelly’s laboratory, is located in the tower. It is quite difficult to get to it, as you have to climb a narrow spiral staircase of 60 steps. It is believed that this staircase was designed by Edward Kelly himself, comparing it to the spiral of life. The laboratory is divided into two spaces. The first room serves as a library, where large dusty books are kept, and as a part-time warehouse. Also waiting here are wax figures of Kelly himself, his friend John Dee, with whom they did their magical work, Emperor Rudolph II, and, quite unexpectedly, William Shakespeare.

In the second room, which is the laboratory itself, you can see a large number of all sorts of alchemical and magical paraphernalia: ovens, near which you can try to blow fur, a human skeleton, stuffed animals for experiments, a chest with dragon eggs, and the creation of a homunculus and more. The exhibit with Edward Kelly after the explosion, the result of a failed experiment, is very naturalistic in the lab. Such activity is quite tiring, so the scientist sometimes rested – his cozy corner can also be seen on display.

The third space is the Kellyxir Tavern. Successfully made interior of the institution takes us to medieval times, enveloping us with the atmosphere of mysticism. In the bar you can try alchemical drinks and refreshments for the road. The prices in the institution won’t please you very much, and you shouldn’t expect much extravagance from the food.

Admission fee for adults is 220 CZK. There are special tickets: 160 CZK for students, 90 CZK for children and pensioners. Families with two children can get a ticket for 490 CZK – each additional child increases the price by 40 CZK.

There are also various discounts, for example for a group of 15 persons or more a discount of 20%. Learn more on the website of the museum. And for a deeper dive into the world of alchemy, you can order the tour for 500 CZK in a foreign language. But among the languages offered may not be in Russian. Do not despair, in the museum are given brochures in your native language with a story about the exposition.

There is an interesting proposal – a double ticket, which can be used to go to the Museum of Prague legends and ghosts. For adults this variant costs 310 CZK. For students 220. For children and pensioners is also available a discount ticket for 130 CZK. Family ticket – 700 CZK with 60 CZK increase for each additional child.

The museum is located at Jánský vršek Street 8 in the western part of the historical district of Prague – Malá Strana, or “Prague Lesser Town”. In 10 minutes walk from the museum there is a famous fortress of Prague Castle.

The nearest subway station “Malostranská” is located a little over a kilometer to the north-east.

Museum of Alchemists and Magicians

Prague was firmly entrenched as the capital of alchemy and magic. It is not known why representatives of these “professions” came here – some were more scientists like Goethe’s Faust, some were charlatans and swindlers – but the fact remains that there were many of them in the city. 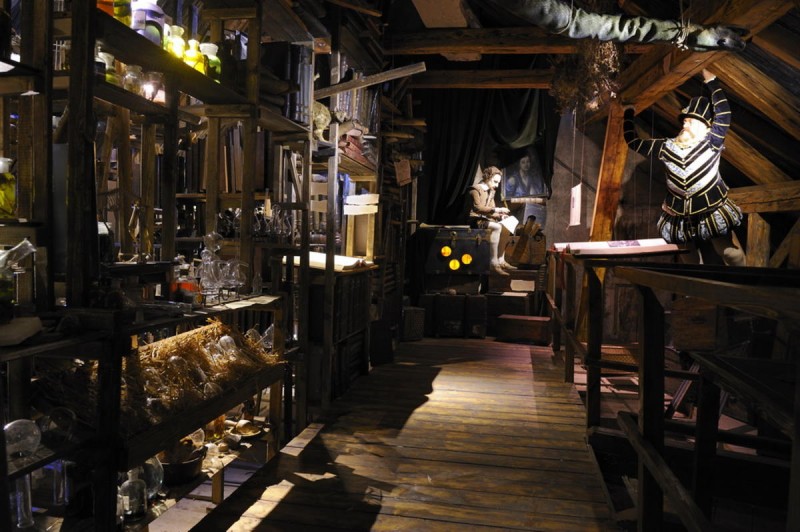 Where else but in Prague should a very interesting museum have sprung up. It is located in the former laboratory of Edward Kelly, the Scottish alchemist. 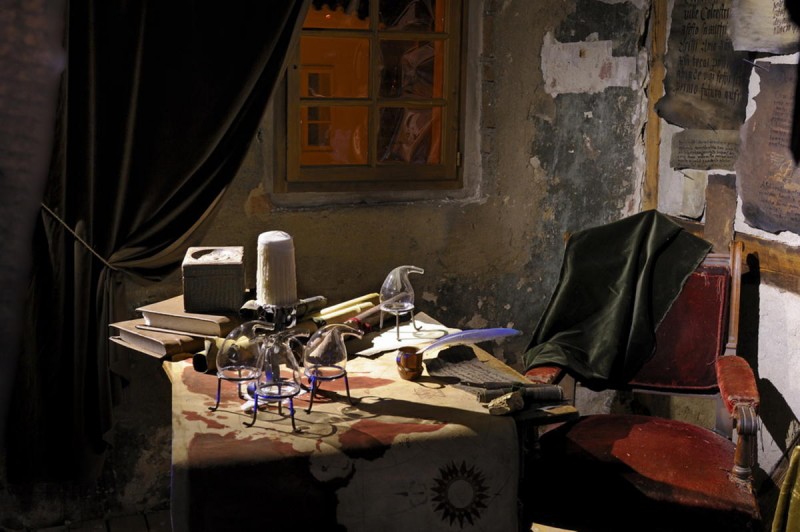 The history of Edward Kelly and his laboratory

The difficult life of the “scientist” is now reminded by the name of the house “At the Donkey’s Cradle”. The funny name has to do with the legend: Kelly’s ears were cut off – the way they punished cheaters and swindlers in the Middle Ages. A townswoman saw it and told everyone. On returning home, the poor woman found a donkey in the cradle instead of her child. Regular prayers to the Virgin Mary helped: the child was restored to its former appearance, and the name was firmly attached to the house. 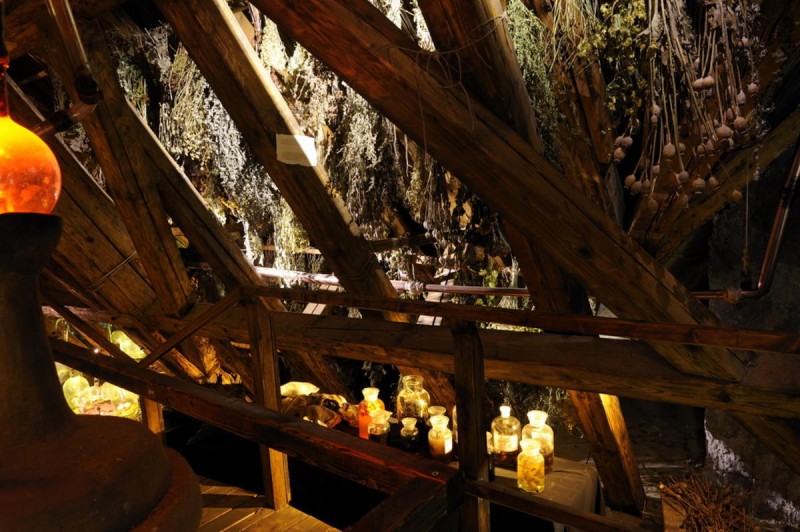 Edward Kelly appeared in town in 1584 with his assistant and immediately sought an audience with the then Emperor Rudolph II. He claimed to be a renowned alchemist, magician and sorcerer, and his main skill was turning all metals into gold with ease, summoning spirits and communicating with them. His history is told today by the museum. 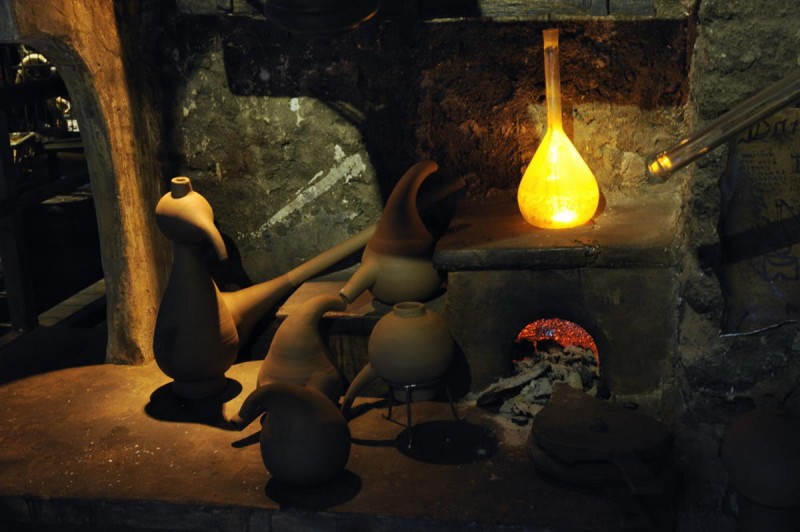 This museum is interactive. That means that it does not exhibit authentic items (although, of course, there are some), but rather reconstructions, and the purpose of the exhibit is not to show, but to give an idea of the activities of alchemists and magicians. Many of the exhibits can be touched and you can make something yourself. 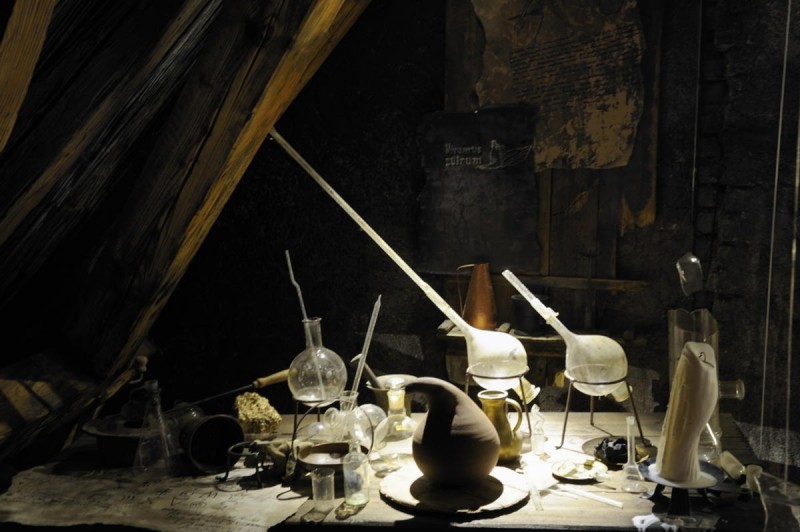 There are two complete and self-contained exhibitions. The first tells the history of alchemy, the second, interactive, is an alchemist’s study, his laboratory and the holy of holies. 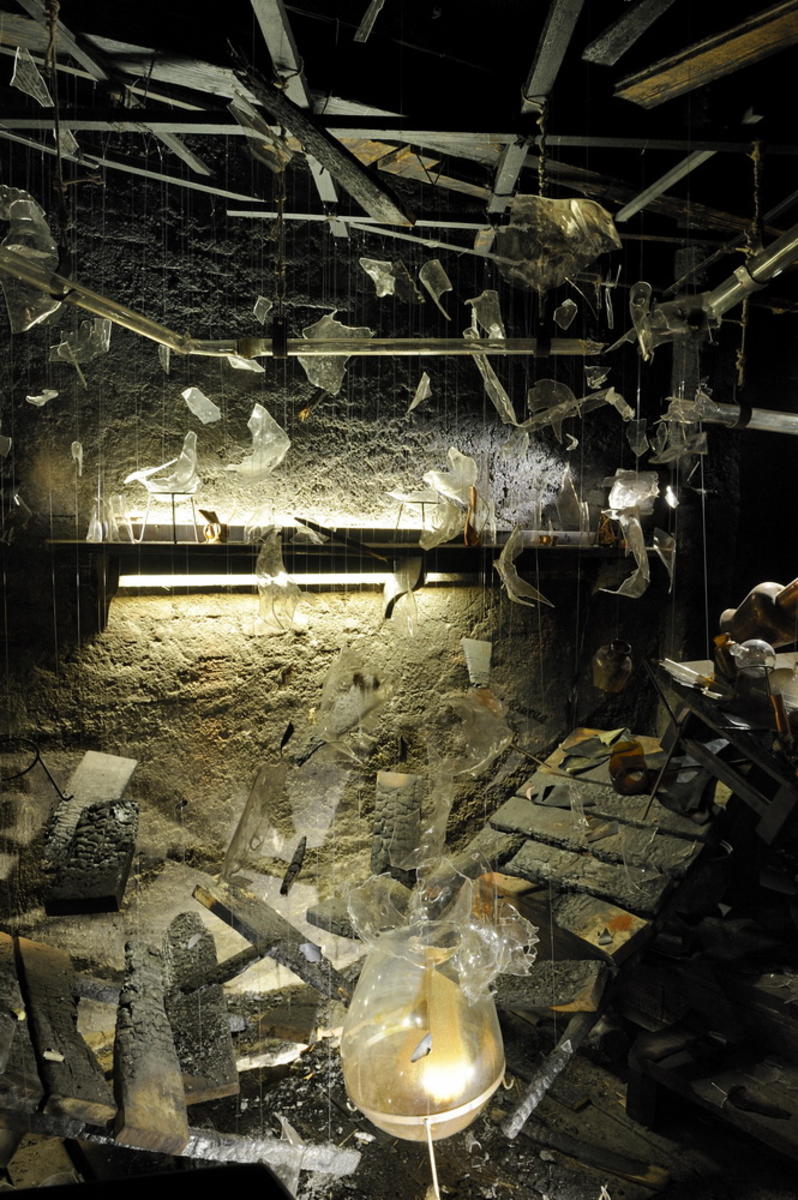 After opening a heavy door, guests enter a world of magic and sorcery. In one place, piled high with scrolls of magical knowledge, dilapidated with time, in the other, glass flasks of all shapes and sizes rest. Potions and magic elixirs were prepared in them. Sometimes alchemists did make great discoveries, like Berthold Schwartz, who invented gunpowder and probably used the same kind of chemical utensils. 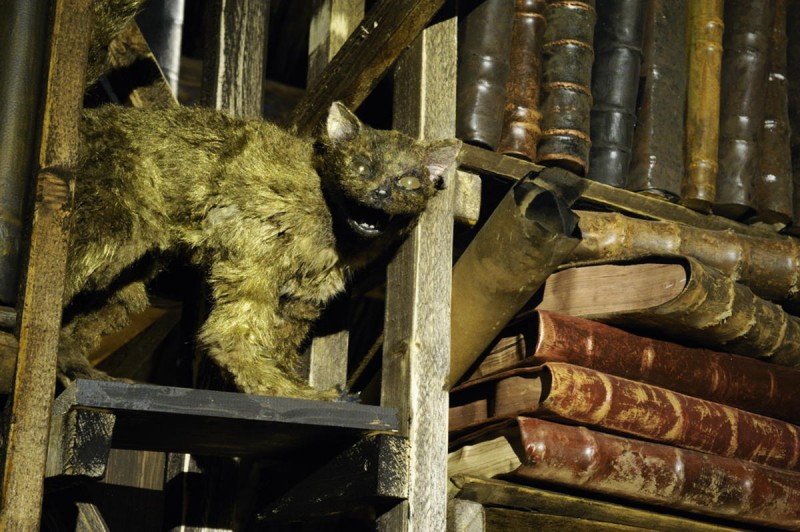 A small human skeleton in a glass flask recalls the creation of an artificial man, the Golem, the hero of Czech myths and legends. 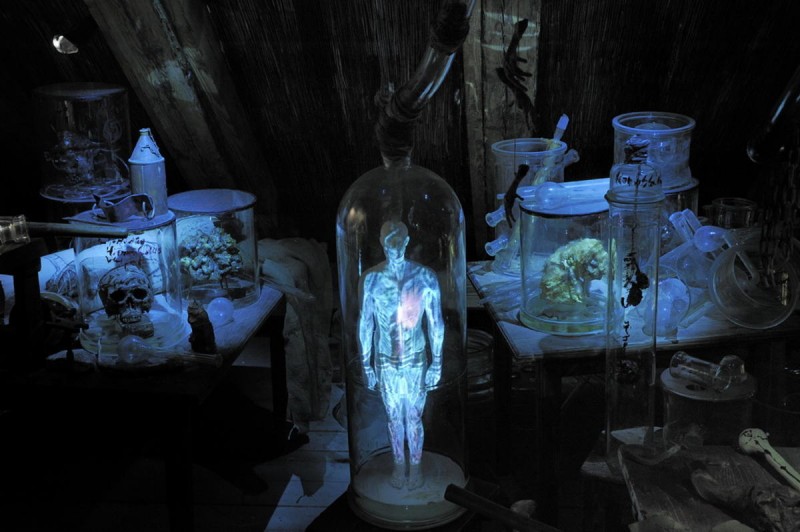 In the corner, you will find the magician’s oven, which you can blow with specially adapted bellows and try making herbal potions. The alchemist himself, watching over the process, will help create the mysterious atmosphere. Of course, it is an artificial wax figure, but the effect of the presence is stunning. 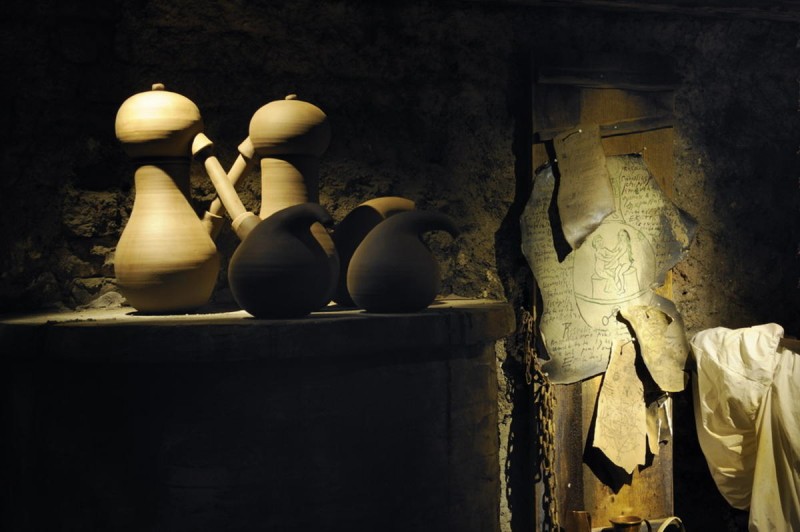 Climbing the spiral staircase, which the owner of the laboratory himself, Edward Kelly, called the spiral of life, visitors find themselves in a real alchemical laboratory. The wax figures represent Emperor Rudolph II, Kelly’s patron and persecutor, his assistant, the alchemist himself, and William Shakespeare. It is hard to say why the playwright is in this company, probably because Shakespeare is an enigmatic figure. Kelly has just finished an experiment to extract the philosopher’s stone needed to turn the metal into gold and is stunned by the results: there has been an explosion. Both Kelly and Rudolph didn’t understand what had happened after all. Perhaps it was after this experience that the alchemist fell into disfavor. 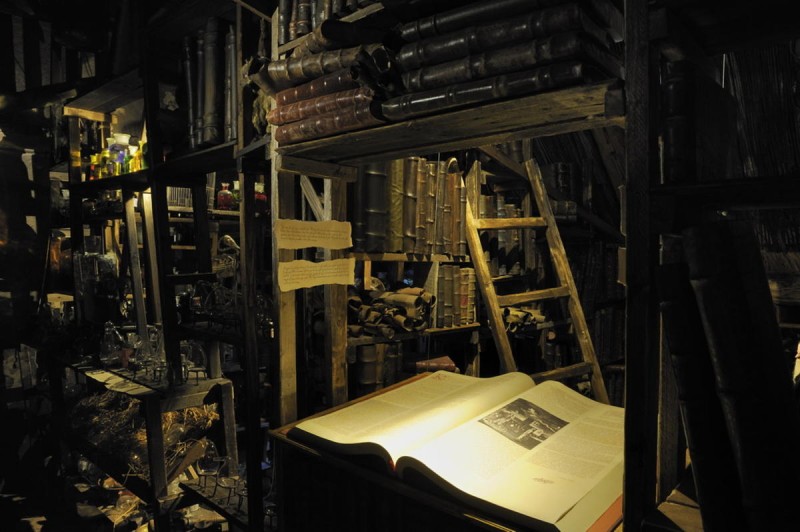 There is also a room with wax figures depicting magicians at work: one is lowered to the floor to follow the mysterious writings and signs, the other looks in horror at the hole in the ceiling, from which human feet can be seen: the curious one has been dragged away by the devil. 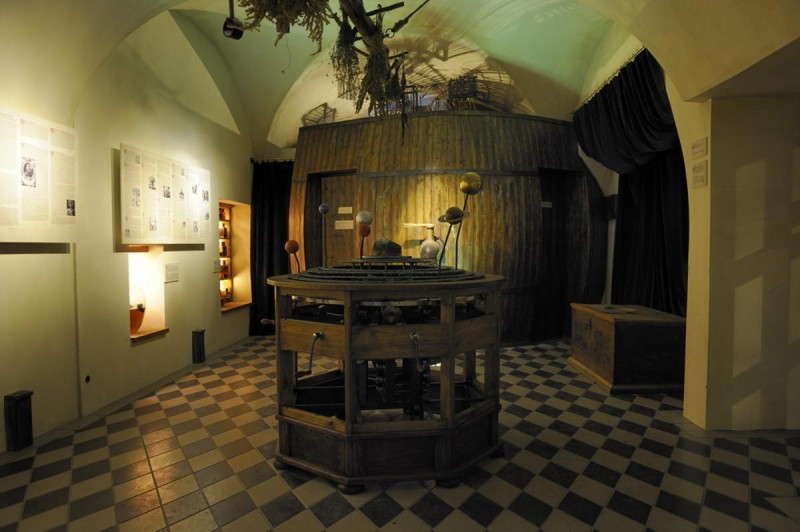 Looking closely at the walls, modern participants in alchemical experiments can see many glass pipes and tubes that literally entangle everything around them. This exhibit reflects a true scientific discovery of the pseudo-scientists: they learned how to use the method of distillation. 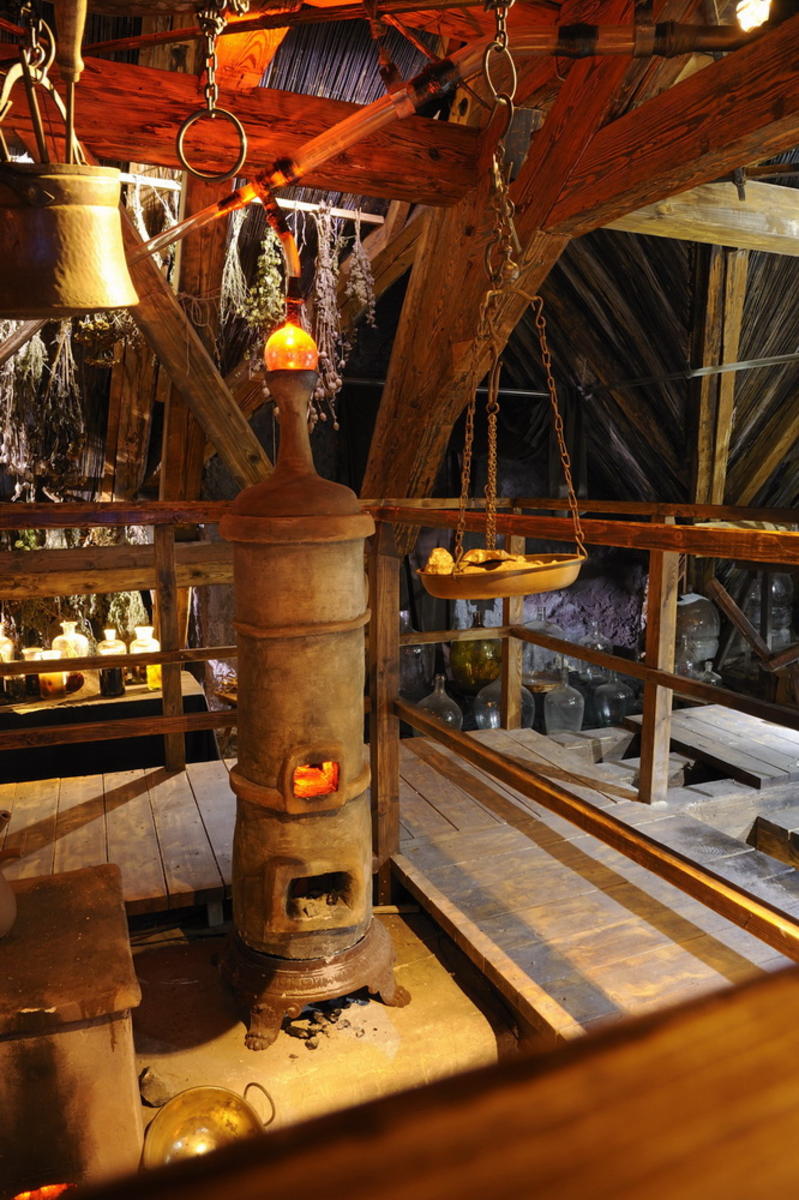 In the museum, these pipes and tubes have quite a practical purpose: they lead to a wonderful restaurant called “Kellixir,” where everyone can taste potions and decoctions. 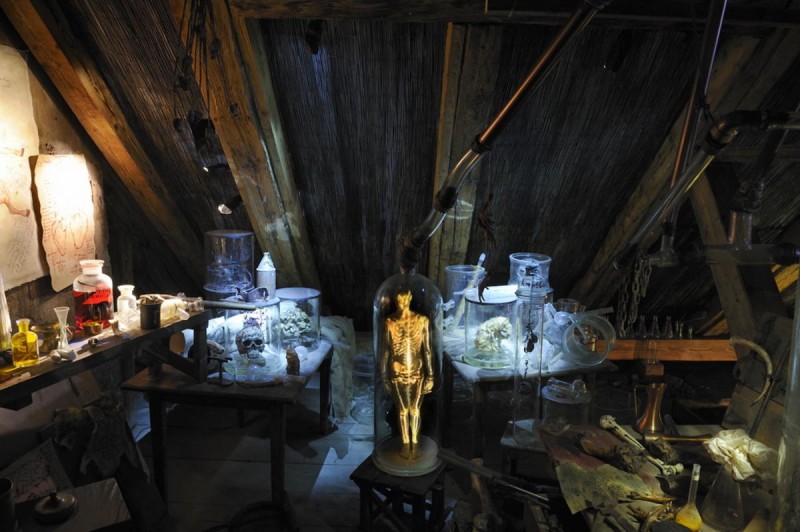 There are all kinds of museums in the world. Most often they are serious, making you stand in admiration before the geniuses of culture, science and art. The Museum of Alchemists and Magicians is a museum with a smile, a museum of the childhood of science.