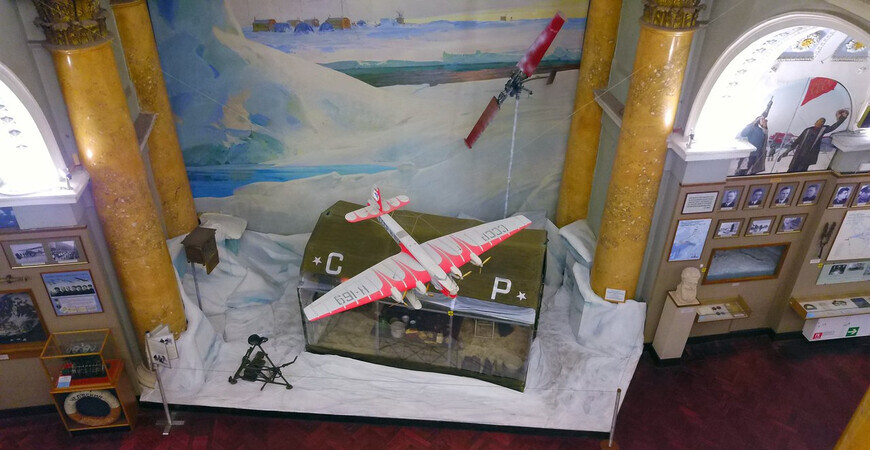 The Arctic and Antarctic Museum in St. Petersburg keeps unique exhibits about the history of exploration of this harsh territory and scientific discoveries made.

The first exposition of the museum was assembled in 1930, although scientists started talking about the need of such an exhibition in the 20s. At that time there was no separate building for the exhibits, they were kept in the basement of the Arctic Institute, where they were extracted only during the next exhibition.

Panorama of the museum building:

In 1933, for the permanent exposition and the creation of the Arctic Museum the institute received the building of St. Nicholas Common Faith Church. Within a few years the church premises were rebuilt as a museum, scientists prepared thematic exhibitions for it and in 1938 the Arctic museum opened for visitors. In the 1950s – the period of active exploration of Antarctica – the collection was enriched with new exhibits, and therefore the institution was renamed the Museum of Arctic and Antarctic.

Today the museum introduces visitors to the major historical milestones in the development of the polar zones. Here are collections, presenting household items of the Pomors, various archaeological monuments, instruments, archival documents, maps, samples of polar explorers’ equipment and much more. The exposition is of interest to both adults and children, especially kids of school age.

Mode of the Arctic and Antarctic Museum in St. Petersburg

The museum operates according to a seasonal schedule – from January and in summer (from January 1 to August 31) when thousands of tourists visit the northern capital, the following schedule is established:

The rest of the time – September 1 to December 31 – the museum is open according to the following schedule:

Watch for changes in working hours on the official website of the Arctic and Antarctic Museum.

To visit the museum you need to buy an entrance ticket. Benefits are available (you need to show the appropriate documents).

Employees of the museum have developed a wide range of programs – overview, thematic, children’s, family excursions. Their duration varies from 30 to 90 minutes, and the cost – from 700 to 1700 rubles. To make an appointment for a tour to the Museum of Arctic and Antarctic call +7 (812) 571-25-49. Look for the preview of the programs on the official website of the museum.

You can also visit the Museum free of charge by the guest’s card of St.Petersburg or with the documents, confirming the privileged status. The third Thursday of each month – free admission for children, students and members of large families.

Today, guests of the Arctic and Antarctic Museum in St. Petersburg can see three exhibitions:

In addition to permanent exhibitions, guests of the Museum of the Arctic and Antarctic in St. Petersburg can visit the current exhibitions devoted to the polar theme.

Often in the halls are exhibited paintings, photographic documents, collections of household items and clothes of the inhabitants of northern territories, samples of equipment and equipment of researchers, etc.

Museum of the Arctic and Antarctic is located in the historic center of St. Petersburg at 24a Marata Street. Nearby are the museums of famous writers – the museum of Fyodor Dostoevsky and Lev Gumilev’s apartment.

Literally 300 meters from the museum there are two metro stations – Vladimirskaya (red line) and Dostoevskaya (orange). It is worth noting that the red line runs through almost all of the city’s railway stations, which greatly simplifies the way for tourists.

Near the museum there is a streetcar stop “Street Marata”, which runs routes number 16, 25, 49.

In this case, you do not need to worry about parking. You can call a car via Yandex.Taxi, Uber, Taxovichkof, Concorde, Veset, Gett and Maxim. 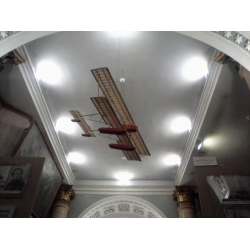 I knew about the Museum of the Arctic and Antarctic for a long time, but somehow it so happened that I never got to it, although I often go to St. Petersburg. I decided that this year I had to go for sure! The museum is open since.

The key to Antarctica saw?

In the heart of St. Petersburg is a very interesting museum. Museum of the Arctic and Antarctic. The museum building is unremarkable. Well that’s the name and beckoned to visit it. At the entrance you are greeted by a sculpture, and stands with information. It is very nice.

Stunning exhibit, everything is accessible and understandable.

In this review, I will tell you about one in my opinion cozy and interesting museum. This is the Museum of “Arctic and Antarctic”, which is located on the corner of Marata Street and Kuznechny Lane in St. Petersburg. The museum is located in a small building.

A bit like this and just a “highlight” of the city

I always thought that the Arctic is the endless snow, cold, snowdrifts, cold, but visiting once in a museum dedicated to this subject you realize how different and wonderful is the history of exploration of the Pole and the people who just live by this place.

Unknown places often attract, you want to be there, to see all the beauty with your own eyes, breathe the aromas of a new place, because it always smells different. But there are some places you’ll never find yourself in for sure: they evoke.

One of our favorite museums in St. Petersburg.

In downtown St. Petersburg is one of the most interesting museums, in my opinion. The Russian State Museum of the Arctic and Antarctic. It is located at the intersection of Marata Street and Kuznechny Lane in the building of the former Nikolskaya Church. In the 30s.

Museum, “imbued” with the spirit of research and great discoveries.

An interesting exposition, it is possible to go with small children, the convenient location, low entrance fee.

Hello! Today I want to tell you about the amazing St. Petersburg Museum of the Arctic and Antarctic. The museum is located near Vladimirskaya metro station. The museum is beautiful from outside because it is located in the building of the former St. Nicholas Orthodox Church. And inside there are many interesting and unusual expositions.)

One of my favorite museums in the city.

My first acquaintance with this museum happened during the first night of museums! And it was love at first sight))) Very cozy and warm despite the fact that the theme of the museum is frost. After the first visit a year has passed and.

Once again I went with my girlfriend to this museum. It was opened in the thirties, the time of intensive polar explorations. From them in the museum there is still Comrade Chkalov’s plane, big and hanging from the ceiling, as well as the tent.

A great keeper museum of Arctic and Antarctic history.

Having been in St. Petersburg on a business trip I did not see much due to lack of free time. But I did manage to visit one museum. I went there at the request of children. They had read about this museum on the Internet. Russian.

Somehow all did not get into this museum, visiting many others. But last year I was passing by and decided to go. The entrance fee is symbolic – about 200 rubles. The museum is located in the building of the former church.

Some kind of double impression, but it’s personal.

This museum is a five minute walk from where I lived in my childhood. I haven’t been in it for more than forty years, as a child we used to run to it for warmth during walks when we were still at home.

The museum is clearly overcrowded. There is not enough space in the lobby, and the expositions could have been made even more interesting if there was room to expand.

Today we visited the Museum of the Arctic and Antarctic for the first time. Our impression is the best. There is a lot of material for everyone who is even a little bit interested in our planet and the history of its exploration. Diaramas of tundra, bird’s bazaar, North Pole-1 station. A lot of interesting materials on.

READ
Museum of art of stone-cutting and jewelry art.

For the first time I visited the museum and there was no time to take photos!

In summer with my family we had a little trip to St. Petersburg. And this was my first visit to the Russian State Museum of the Arctic and Antarctic. I am not close to this topic of exploration and geographical discoveries, but the museum was recommended to me by friends.

Recently I was on a business trip to St. Petersburg. Not to waste time, and to expand my horizons, I decided to go to the Museum of Arctic and Antarctic. To tell you the truth, before visiting the museum I knew nothing about it.

I went to the Arctic and the Antarctic, and I didn’t freeze!

I didn’t expect anything special from this museum – the topic of polar expeditions doesn’t really touch my imagination. But as this museum is quite big and famous, it was necessary to visit it at least once. In fact.

Good day, dear visitors! I visited this nice museum during my winter vacation in St. Petersburg in February 2012. Like all Peter’s museums the Museum of the Arctic and Antarctic is original in its own way.

The museum is worth a visit.

Interesting museum, starting from the architecture of the building – the former church, to the exposition of the museum itself. Informative tour, a lot of exhibits. Totally Soviet museum, no modern gimmicks, but a must for a one-time visit! The only downside is the staff. The caretaker on the second.

I did not regret the money I spent.

I went with my wife to Saint Petersburg in October of this year. The first museum we visited was the Arctic and Antarctic Museum. Good museum, and many impressions. This is two floors of exhibits. On the first floor are stuffed animals of the north.

We were unpleasant and unreasonable behavior of the museum, I will explain why. The museum participated in the action “Day of Museum” on 18th of May and was in the official list of accessible free museums for visiting on this day, but we got the opportunity to see it on the first floor.