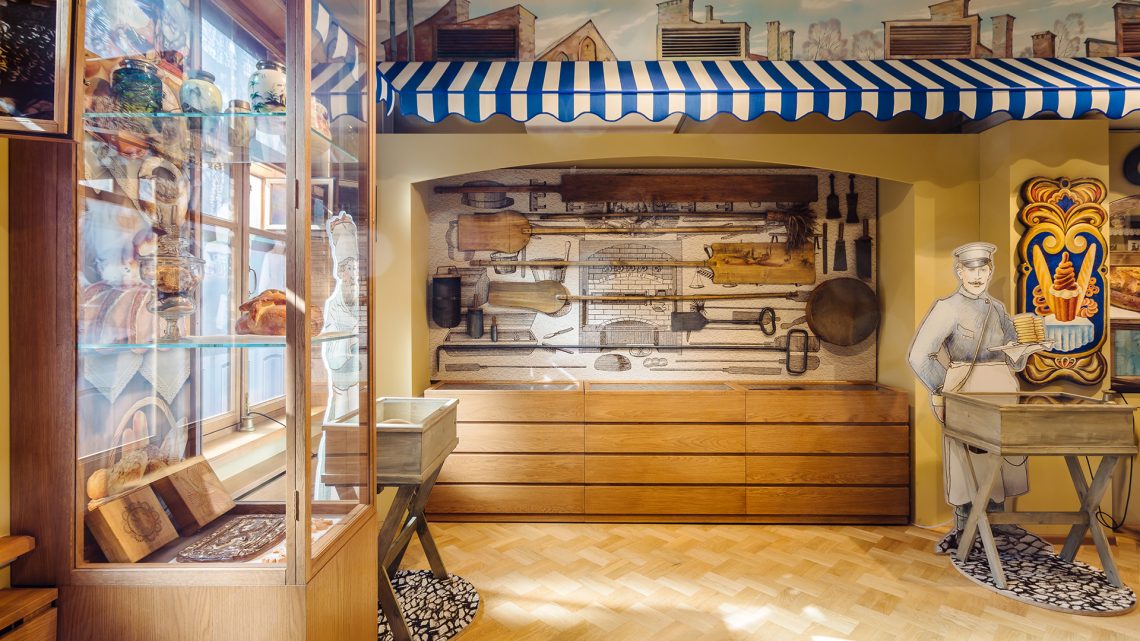 The only in Russia and thirteenth in the world St. Petersburg Museum of Bread was created in 1988 as a branch museum. In 1993 he received the status of the state. The name of the museum reflects its essence. The interest in the bread – the ingenious invention of mankind – is not accidental. In the age of technological development bread remains a symbol of the harmonious relationship between man and nature. The history of bread is inseparable from the history of mankind. This is evidenced by numerous archaeological finds and written sources. In honor of the bread composed hymns, songs, performed rituals, organized festivals in conjunction with the sowing and harvesting.

Bread and salt was used for welcoming a newborn baby, a bride and groom, and dear and respected guests. All these folk customs contain human wisdom, respect for the bread, which has been passed down from generation to generation and inculcated in children from their earliest days. Bread as a cultural phenomenon, allows interesting and unusual perspective to show the life of society, its way of life. The museum exhibition gives us an opportunity to see the life and habits of our ancestors through “our daily bread”. Along with the exhibits, characterizing the high culture of baking in antiquity, it shows the history of baking in St. Petersburg.

The museum exhibition covers the period from the formation of agricultural crops to the present time. The unique exhibits in the museum shows the history of production and consumption of bread in ancient Russia and the history of the baking industry and bread trade in St. Petersburg.

Mode of operation of the Museum of Bread in 2022

The cost of a standard ticket to visit the museum – 200 rubles.

For pupils, students and pensioners is a preferential ticket – 120 rubles. For preschool children 3-7 years old the price of the ticket is 10 rubles.

Museum attendees may visit the museum for free:

Interactive lessons and thematic excursions are held in the Museum of Bread by appointment.

The following guided tours are available:

Details about each excursion can be found on the official website of the museum.

The cost of the tour is 250 rubles per person.

Sections of the exhibition 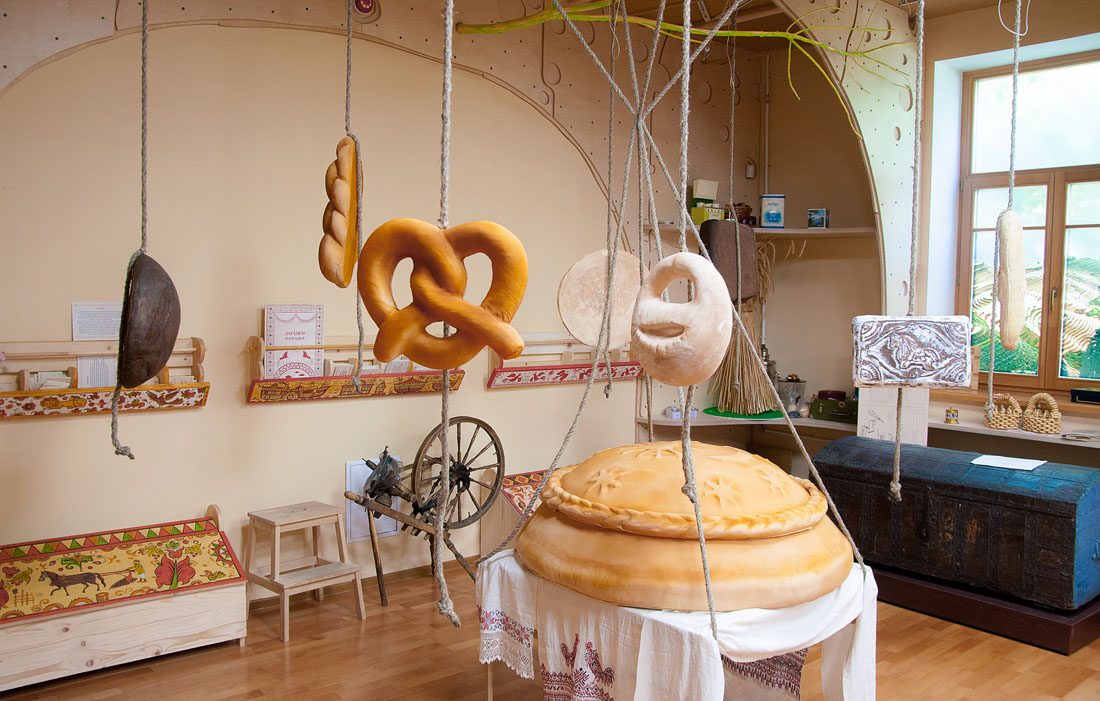 History of the origin and formation of bakery – a brief excursus in archeology and ethnography. The history of bread in Russia before Peter the Great.

In this section you can see the most striking types of baking in Russia: kalach long, pie, kovrizhka. A large amount of bread was baked in monasteries, as evidenced by miniatures and texts of annals and hagiographies of saints. Private baking is described and regulated in the Domostroy.

History of bakery and bread trade in St. Petersburg

In the 18th century, with the founding of St. Petersburg and the creation of the regular army, the need for bread increased greatly. Industrial baking began to develop in Russia. With the introduction of shop legislation, the existence of individual bakeries was streamlined. The first shop bakers in St. Petersburg were Germans. On the streets it was more and more possible to meet picturesque peddlers peddlers.

READ
Museum of Marzipan in Szentendre

Chalk shop, typical for the workers and the outskirts of the capital.

In St. Petersburg there were up to 3,000 petty shops with small bakeries, which sold not only bread, but other goods as well. In such shops were allowed to bake only rye bread. One such shop served 3 or 4 houses.

For a long time in Russia was formed bright and distinctive custom of tea drinking. Samovars of different shapes and sizes that appeared in XVIII century, gradually took an important place in residential interiors, tea-houses and taverns. A kind of business card of confectionery producers and traders of “colonial” goods were spectacular packaging boxes that also served as a great advertisement for the goods. Decorated by sketches of famous artists, many of them were works of graphic art.

A variety of recipes, both traditional Russian and European, naturally entered the life of St. Petersburg, and served as the basis for the publication of numerous cookbooks and dictionaries. Restaurants and confectioneries opened in St. Petersburg competed in the art of cooking, which were offered to visitors in originally and colorfully decorated menus.

The Dining Room and Cuisine of a St. Petersburg Family in the Late 19th and Early 20th Centuries

The dynamically evolving culture of the city led to changes in the whole way of life of its inhabitants. Along with the traditional clay and wooden kitchen utensils, metal crockery and forms for baking cakes, gingerbread, kovrizeks and other products for which Russian cuisine had long been famous became commonplace. Any family or calendar holiday was always accompanied by a feast, so the table setting was of great importance. The festive table was covered with a snow-white tablecloth, fine dishes and drinks were served in the best tableware. There was an inexpressible charm in family tea parties when all the family gathered around the cozy whistling samovar and interspersed tea drinking a leisurely conversation.

READ
Tulsky Gingerbread Museum in Tula, How to get there and the exposition

Bread of crisis periods in the development of society

There were frequent crop failures in Russia. They were mainly the cause of famine. People’s unrest broke out, often leading to disastrous consequences. The government at different times tried to save people from the consequences of crop failures. granaries were opened and monasteries distributed bread free of charge. In the 19th century charitable societies were created. The government printed lists of surrogate bread substitutes. Food crisis of 1916 provoked unrest in the capital of the Russian Empire and was one of the causes of the revolution. Severe famine in the Volga region resulted in many victims.

The most tragic page in the history of our city is the siege. Bread production becomes the main problem. There was a search for surrogates that would be applicable throughout the industry. The total amount of various impurities in some days reached 40-50%. At the most difficult time the daily rate of bread for a child and a dependant was 125 grams. In addition to bread, everything that could be cooked and eaten was used as food. Water shortages made life even more difficult. Despite all the difficulties in the city, laboratories were developing soy products, vitamin supplements for food. Personnel training for bakeries is underway.

Industrial baking began to develop at the end of the 19th century. Mechanized bakeries appeared to meet the rapidly growing demand for bread. After the Revolution and the Civil War, the industry was restored. In the late 1920s, a number of giant bakeries were built in Leningrad, equipped with the latest technology. Before the war the industry became industrialized. After the war the industry was gradually restored. In the 1950s, everywhere there is a change of equipment. Currently there are 24 bakeries in the city.

Information for the People with Disabilities

At this time the museum is equipped with ramps and elevators. The exposition of the first and second floors is accessible.

There is a bell in front of the entrance to the museum from 2 Mikhailova St., which alerts staff to the appearance of a visitor from a disabled group. The entrance and lobby are equipped with ramps.

There is a specially equipped toilet on the first floor of the building.

There is an elevator to get up to the second floor.

Please call us in advance to make your museum visit comfortable and enjoyable.

For visitors with visual impairments there are adapted tours with the use of models, moulages and tactile material.

Braille texts, sound materials (records of folk songs, peddlers’ voices, a dubbed picture “Burlaki on the Volga”), a tactile map of water systems are available for independent study at the exhibition.

A guide dog is allowed at the exposition (if you have the appropriate documents).

The exposition is partially accessible to visitors with hearing impairments (except for sound materials). A sign language interpreter or a voice amplifier may be used for guided tours.

Parking lot for transport of people with limited mobility in front of the museum at 2 Mikhailova St.

TRAFFIC SCHEME TO THE MUSEUM

Public transportation to get to the museum:

Leaflet for visitors with disabilities on how to obtain services and assistance from the staff at the facility: CP6 SBU “St. Petersburg Museum of Bread

We suggest you to get acquainted with the information about the procedure of access to the building of our organization for disabled people and other people with low mobility, about peculiarities of providing services to them and about additional assistance on the part of the organization staff.

Our organization has the following equipment to provide access to the facility and services for people with limited mobility:

Necessary additional help is provided by employees of the organization. To summon an employee use the intercom on the facade of the museum building, at the museum entrance or by phone (812) 294-50-90. You can use the following services in this building:

Services that can be provided remotely, (at http://muzei-xleb.ru/):

On the issues of accessibility of the building and premises of the organization, services provided, as well as if you have comments and suggestions on these issues, you can contact the responsible employee of the organization – Svetlana Kutova Kutova O. V., tel.: (812) 294-50-90.