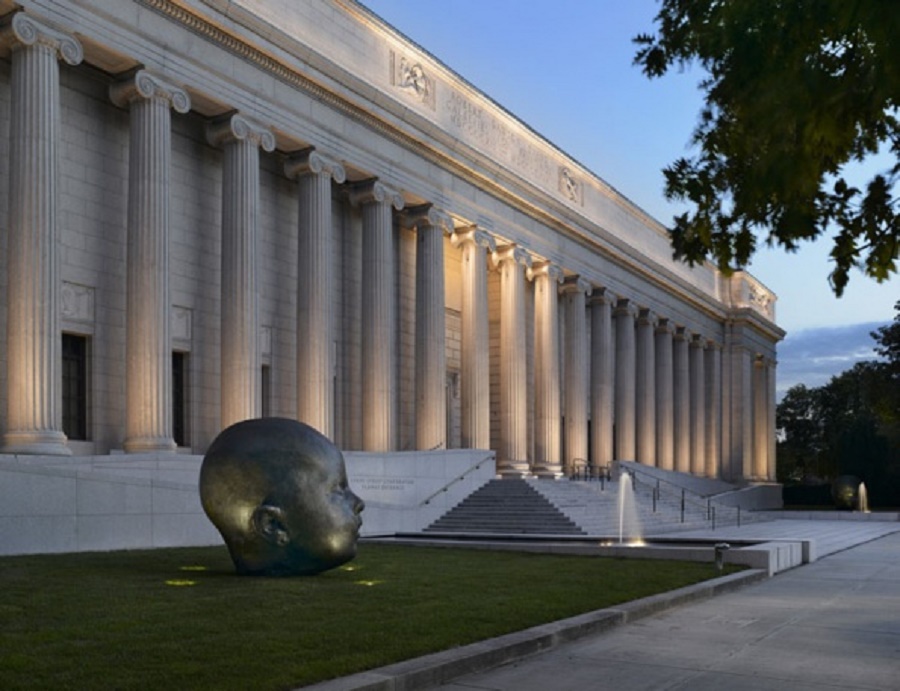 One of the oldest cities in the United States – Boston, founded in 1630, has the status of an intellectual (more than a hundred universities and colleges), technological and political city. Boston is also famous for its cultural traditions, the city has several museums, of which the Museum of Fine Arts should be highlighted in the first place. The interesting thing about this museum is that it is the property of all residents of the city. Most of the exhibits in the museum were collected from all over the world and brought to Boston by numerous scientists and businessmen who were no strangers to the public interest.

History of the Museum

The history of the Museum of Fine Arts began long before it officially opened. First the Boston Athenaeum building was built in the city, and the city library opened in this neo-Gothic building in 1807. But beginning in 1826, various art exhibitions began to be held in the building, and the library was given the unspoken status of a museum of the city of Boston. This went on for many years until a certain enterprising group of Bostonians proposed the creation of a separate city center that would be used for art direction. And the Athenaeum’s expanded functions were to be reduced to that of a research library. This idea received the approval of the Massachusetts legislature, and on February 4, 1870, a corporation called the Museum of Fine Arts was founded with the goal of creating such an art center.

The very first building of the museum was built on a plot of land located at the southern end of Copley Square. Notably, the square was named after the 18th century Boston artist, Singleton Copley. The building, designed by architect John Sturgis, took a full twenty years to construct, but in 1876 the west wing of the museum was completed and received its first visitors on the 100th anniversary of the signing of the Declaration of Independence. The official opening of the main building of the Museum of Fine Arts took place on March 18, 1890. 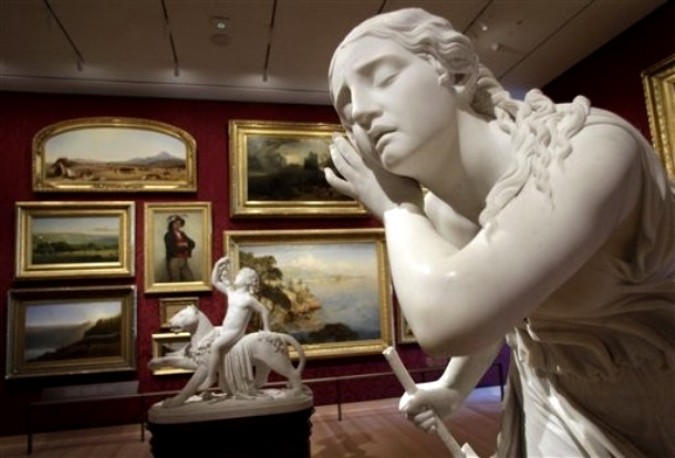 But, it turned out that during the years of building the museum, the number of museum exhibits increased significantly and continued to steadily accumulate. So as early as 1907, new work began on the museum’s premises, located on Huntington Avenue, less than a mile from the old museum building (the Copley Plaza Hotel now rises on that site). The new building, a huge Neoclassical structure, opened to the public in 1909, but it took another six years of construction to complete and was not finished until 1925. The building was designed by architect Guy Lowell, who was well known in Boston because he was born and raised in the city and designed a number of impressive buildings. The artist John Sargent was also involved in the design of the museum building. 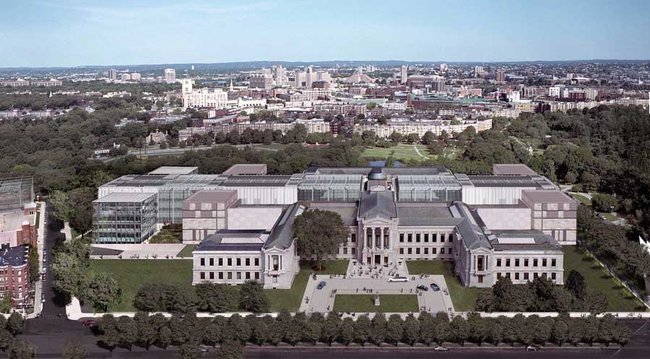 The Museum of Fine Arts in Boston

In the following years of the museum’s existence there were several more additions, the most interesting of which is the western wing, which appeared in 1981. The decision to build it was made in the late 1970s, when the number of exhibits was approaching the half-million mark. The west wing is quite an impressive building, it was given to the museum by architect I. M. Ray, known throughout the world as the author of quite original and controversial projects. For example, he is the author of a new entrance to the Louvre building, which surprises visitors with its graceful pyramid of glass. The west wing of the Musée des Beaux-Arts also looks very modern and in stark contrast to the old buildings. What they do have in common, however, is that both the old and the new are made of granite from the same quarry. The new millennium also brought with it another new addition, built in 2000 specifically for American art. 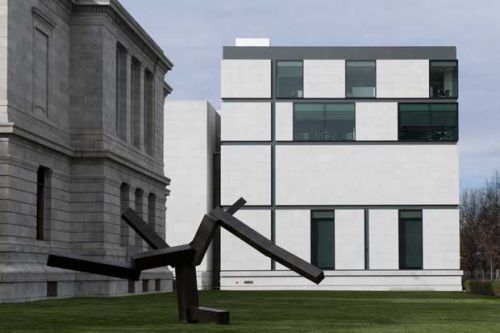 Today the Museum of Fine Arts is a huge multidisciplinary complex. The museum fund has more than a million exhibits of fine and applied arts. Among American museums it is second only to New York’s Metropolitan Museum of Art. A few of the indicators allow the Boston Museum of Fine Arts to be considered the best among the rest of the world. 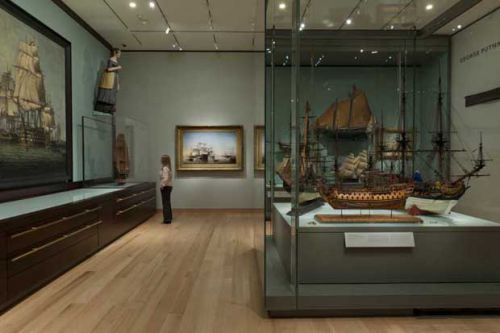 The museum prides itself on having the most extensive collection of Claude Monet paintings outside of Paris. The museum also has a rich collection of art from the ancient East, especially the Egyptian collection. The collection representing Japanese ceramics assembled by Edouard Morse is unrivaled outside Japan. The museum’s collection contains one of the world’s finest collections of American realist and impressionist artists: Winlow Homer, John Copley, and John Sargent. The French Impressionists are represented by paintings by Manet, Renoir, Cézanne, Gauguin and Van Gogh. In addition to its magnificent exhibitions, the Museum of Fine Arts in Boston is a center for the study of the cultural and artistic history of various peoples of the West and the East. This aspect makes it even more popular with visitors and natives alike.

The museum has a café, gift store and parking for visitors with private cars.

Founded in 1630, Boston has long been an intellectual, cultural and technological center among North American cities. Among the museums located in the city, there is one that is an unforgettable experience. We’re talking about the Boston Museum of Fine Arts, the second largest collection of attractions in the United States, second only to the Metropolitan Museum of Art in New York.

History of the Museum of Fine Arts in Boston.

This repository of masterpieces of world art owes its birth to the construction of the Ateneum, built in the then fashionable Neo-Gothic style. In 1807, a public library was opened there. Its popularity grew greatly after the first art exhibition was held in the halls of the Ateneum in 1826. The local elite liked it so much that it became a regular event, and the library gained the unofficial title of a museum of Boston’s history. One day an unknown enterprising person came up with a wonderful idea, supported by a group of like-minded people, to build a separate building in the city that could be used not only for the beloved exhibitions, but also for other art events. Word with deed, and in early 1870 the company, which was named the Museum of Fine Arts, began its construction. Remarkably, the square on which it was built was named after Singleton Copley. He was an artist and a native of Boston. The architect of the first museum building was John Sturgis.

The first visitors entered the open doors of the Museum of Fine Arts in Boston in 1909, although some construction and finishing work was still underway. They weren’t fully completed until 1925. Despite this, thousands of tourists poured in to admire the exhibits presented, collected and donated not only by businessmen and scientists, but also by concerned people. Over the years several additions have been made to the building, including a modern-looking west wing.

Today, the Boston Museum of Fine Arts is the most diverse collection of rarities from different periods and in different styles. At the moment there are more than 1000000 unique objects in its exhibits and storerooms. At the beginning of the 21st century, in order to house the works of American masters of the fine arts, another enormous annex was added to the main building. As of 2011, more than 1.2 million people have visited the Museum of Fine Arts in Boston.

The collection of the Museum of Fine Arts Boston.

According to many visitors, the exhibitions in the halls of the Boston Museum of Fine Arts are striking in both temporal and spatial breadth. This allows the museum to remain on the list of the world’s best collections. It is impossible to fully explore everything in it in a single day. Exhibits are presented from all over the world, from ancient Egyptian finds to the masterpieces of the 21st century.

The beginning of the collection of canvases was a painting “Elijah in the desert”, which belonged to the brush of Washington Alston. Interestingly enough, all the first exhibits in the museum were painted exclusively by American artists.

The collection of antiquities in the Boston Museum is not much inferior to the famous Cairo Museum. Precious artifacts from ancient Rome and Nubia, ancient Greece and Cyprus, Egypt and the Near East and Asia Minor date back to the seventh millennium B.C. You can see with your own eyes the works of ancient masters represented by paintings, sculptures, masterpieces of jewelry art. And the collection of 8000 coins will make any numismatist stand still in mute delight. The museum’s collection of 8,000 coins will make any numismatist stand in awe.

European art in the Museum of Fine Arts in Boston is represented by works of Italian, Dutch, French, Spanish and English artists of the 17th-20th centuries. You can see the paintings of Durer, Rembrandt, Degas, Renoir, Claude Monet, Van Gogh and other masters of painting. It is separately worth mentioning the collection of Claude Monet’s works, the number of paintings is second only to the collection of Paris. In addition to paintings, the collection of the Museum in Boston includes sculptures, fragments of frescoes, ceramics and pieces of furniture. An important place in the European collection is occupied by sets of English silverware and fine porcelain.

Among the great number of items in the American collection, the centerpiece are paintings by seventeenth- and nineteenth-century artists: D.S. Sargent, Gilbert Stuart, and John Singleton Copley. The highlight of the exhibition are the creations of indigenous peoples of North and South America: ceramics, household items, clothing and ancient jewelry.

Countries of Oceania, Africa and Asia are represented in the Boston Museum by more than 2,250 pieces. Some of them are over 6,000 years old. Ancient Japanese paintings, sculptures, objects of decorative-applied arts and a great number of magnificent postcards occupy the central place in the collection.

For connoisseurs of “live music” it is interesting to visit the exposition of musical instruments, where apart from unique ones, which pleased the ears of people of ancient civilizations, samples of more modern instruments are represented. A lot of etchings, drawings, photographs and engravings depicting scenes from everyday life and life of musicians. The oldest ones are dated the second half of the XV century.

Fashion lovers won’t want to miss a chance to visit the Boston Museum of Fine Arts section featuring textile and clothing collections, delightful embroidery, costumes and shoes, accessories and books on the history of fashion. Separately, unique quilts and magnificent carpets are on display. On display are creations of great designers of the 20th and 21st centuries from Europe and Asia.

In addition to permanent exhibitions, museum staff periodically prepares temporary exhibitions, where you can get acquainted with the works of Rembrandt and Vermeer or other famous painters. There are thematic lectures, film screenings and various concerts.

The Boston Museum of Fine Arts has everything arranged for the convenience of visitors. After touring the museum halls, you can relax in a cozy cafe or visit the store opened at the museum. Children develop creative skills and give them special cards for coloring and drawing. The museum is open all week long.