Museum of marzipan in Szentendre

In Hungary marzipan, among other sweets, is particularly loved by the locals. Marzipan is a delicacy, made from ground almonds and sugar syrup (or powdered sugar). In this country there are several museums, devoted to this confectionery. Such institutions can be found, for example, in such Hungarian cities as Budapest, Szentendre, Pecs, Eger, Keszthely.

Especially impressive is the collection of exhibits, which can be seen in the Museum of Marzipan in Szentendre. This institution was founded in 1994 by Karoj Szabo, the famous Hungarian culinary expert. His importance to residents in Hungary is reflected in the respectful nicknames given to this man: the King of Marzipan and Uncle Szabo.

Caroi Szabo was born and mastered the art of confectionery in Transylvania. Subsequently, in order to improve his financial situation, he moved with other members of his family first to Austria and then to Lebanon. Here Caroi Szabó learned the art of marzipan making, spending seven years in Beirut. After he had earned his start-up capital, he returned to Austria and opened a pastry shop there, which for a time was a source of income for him and his family. Further development of the establishment was helped by an idea that came to Sabo’s mind one day. At that time, a famous cartoon was on TV, and the owner of the confectionery decided to make the characters of this work from the marzipan mass. So, the cartoon character was molded to his full height and took his place in the confectionery. This ensured the institution’s great popularity among the locals.

Szabó took out a patent to make other cartoon characters, which began to appear there one by one. The confectionery became more and more successful, and a guesthouse and a separate hall that became a marzipan museum were built next to it. However, the pastry chef had an unhappy personal life when his wife died in 1985. Since then thoughts of moving to Hungary began to come to him: relations with the local people, who were jealous of the successful confectioner, were difficult. This led Szabó to decide to move his business to Budapest, to the island of Csepel, the home of his second wife. This happened in 1990. For several years the cook lived in two countries, Austria and Hungary, but eventually moved to Budapest in 1994. That’s when his famous museum was opened. Subsequently, on his eightieth birthday, Szabó transferred the management of the museum to other hands.

The museum catches the eye with specific historical figures created out of marzipan mass: King Matyas with his wife Beatrix of Aragon, King Franz Joseph of Austria-Hungary and his wife Elisabeth, King of the Kingdom of Hungary Saint István the First. A tribute to the history of the state is also embodied in some other exhibits: the building of the Hungarian Parliament, the Holy Crown of Hungary, and a map of the Austro-Hungarian kingdom. Interestingly, this map records a specific historical period: the collapse of the unified Austro-Hungarian Empire, which resulted in the emergence of new states in Europe. On this map, as if in reproach, is the Empress Maria Theresa, who belonged to the Habsburg dynasty, made of the same material. She is portrayed with her many children.

Visitors to this museum might also be interested in the room devoted to Austria as a country linked to Hungary by a common history. Here a portrait of the great composer Wolfgang Amadeus Mozart attracts the eye, next to which can be seen his antique violin. Other elements of the exposition also remind us of Austria. You can see the famous Viennese lace; the Austrian coat of arms, made in the form of unusual embroidery on a chair; a tablecloth with an original floral pattern on a small table.

Other exhibits made in the form of confectionery also impress the imagination in this museum. So, here you can find a full-length figure of Michael Jackson. A huge white wedding cake with elegant flowers looks very colorful. Visitors can plunge into the world of childhood a variety of fairy tale and cartoon characters: Thumbelina, three little pigs from the literary work of the same name, Foxy Wook, Mickey Mouse.

In addition to observing the exhibits at the Museum of Marzipan in Szentendre, you can also visit the workshop. Here you can see with your own eyes how the confectioners create products and compositions of marzipan mass. In addition, this museum has a confectionery shop where you can buy the sweets you like. 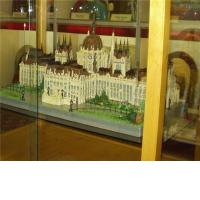 Amazing exhibits; a chance to watch a pastry chef at work. Store with a wide variety. Low cost to visit.

Greetings to all. In the Hungarian town of Szentendre there is an unusual museum – the Museum of marzipan. To visit it is interesting and informative. I will begin with the fact that not everyone in our tour group knew what marzipan is. And this is a delicacy.

Very little space inside, some of the rooms can fit a maximum of 2 or 3 people; you can see everything in 15 minutes

A visit to the Museum of Marzipan in the glorious Hungarian city of Szentendre was included in the price of the excursion “The Danube River. On which I went with the company “1000 roads” , it’s part of the program. This is part of the program, so whether you are interested in marzipan or not -.

So many exhibits and all delicious!

The marzipan museum we had as an intermediate point of the tour in the small town of Szentendre. After walking down a narrow street, we found ourselves at a small house, and only signs indicated that this was the purpose of our trip. We entered in a chain, aisle by aisle.

I am not a museum person. For me, the best museum in a foreign country is the one in the open air. But even I liked the marzipan museum in the Budapest suburb of Szentendre. A visit to this museum was part of the program of the “Danube River Halfway” tour.

Good afternoon everyone. I want to share with you my impressions about my visit to the marzipan museum. When I entered it I was speechless. As though I was in a fairy tale. It is also close to me because of my education.

The happiness of a sweet tooth.

The Museum of Marzipan, located in the small and cozy town of Szentendre, was founded in 1994 by the Hungarian chef Karoj Szabo. It is one of the tourist attractions of Hungary. I was there thanks to the tour “Dreams as a Gift”. which I wrote a review. Let me remind you.

This is a sweet word marzipan!

When I hear the word “marzipan” I remember the curved bun from my childhood, filled with hazelnut and cream. How delicious it was, however, it was not marzipan at all, as it turned out later. And marzipan turned out to be a mixture of syrup.

The art of marzipan

Hungary is famous for its marzipan. The main ingredients of marzipan are chopped almonds and sugar syrup. No one will tell you the exact recipe, because they are kept secret since ancient times. In the country there are even.

Delicious and beautiful exhibits in a unique museum!

In a small tourist town Szentendre, which is spread in the central part of Hungary on the banks of the blue Danube, there is a museum of marzipan. From Budapest the town is relatively close, only 20 kilometers, so it is not difficult to get out. A copy.

You are unlikely to see it anywhere else!

It so happened that I’ve been to the Museum of Marzipan in Szentendre twice – the first time by myself, the second time I went with my mom. The first impression, to be honest, was disgusting. I went on May holidays, when the crowds, plus I was standing.

A wonderful museum for children and adults.

One of the most famous museum of marzipan is located in Hungary, 20 km. from Budapest, in Szentendre. The town itself is small, mostly single-storey, a lot of private houses, cobblestone streets with one-way traffic. One of them goes.

There is a small town in Hungary, Szentendre, where, according to our guides, you can find the most inexpensive and most authentic Hungarian souvenirs. Souvenirs are really enough, and the city itself breathes with antiquity.

It is cozy, quiet and charming.

Good day, dear users! Continuing sketches about the beautiful country of Hungary)) After a ride in Hajdúszoboszló, I went to explore other nearby villages! In particular I want to tell you about the marzipan museum in Szentendre! Szentendre is a city.

Very interesting. First time I’ve been to a museum of any food product)))

What to do when much of what you have planned has already been viewed and there is still time left before you leave for your home country? That’s right, look for adventures beyond what was planned! It was the second week of our stay in Budapest. The tour was not very rich with excursions.

I will never forget it!

As part of the sightseeing program in Budapest, we were invited to go to St. Andre and a couple of other nearby towns. After learning that there would be a visit to the marzipan museum, I was all the more agreeable. We went on a New Year’s holiday, people in.

beautiful, but not very interesting

The Museum of Marzipan, which is located in the Hungarian town of Szentendre, is a popular place among tourists. Of course, when we were in Hungary, we visited this museum, too. For most of our tour group, it caused admiration. И.

Then we ate it as a family.

It is a must-see! There are real sculptors there!

– a choice of marzipan for every taste – from colorful figures to simply slices on weight; – interesting town where the museum is located; – fascinating story of the guide.

– Overlapping several groups in one period – almost a crush formed, it is not possible to take normal photos, as everyone is pushing; – Marzipan gifts will cost a pretty penny.

I saw the review of my friend on the otzovik about Hungary, and I remembered that I liked very much the museum of marzipan. The ticket was not expensive, at least it was worth it, but the marzipan souvenirs, of course.