Museum of marzipan in Szentendre is the most famous museum among the Russian-speaking public. Hungarians apparently do not think so, on the official tourist website Sentendre, it is not even called a museum, it is a gallery, the very last in the list of galleries. Maybe the Hungarians believe that if the marzipan museum is already visited, there is no need to make it extra publicity? The Museum of Marzipan in Szentendre is the first of its kind, although it is no longer the only one. Everyone who comes to St. Andrew’s is sure to visit the marzipan museum. This is the most fun and of course the sweetest museum in the city, I remind you that there are 14 museums in Sentedra.

On March 7, 2022 Russian citizens may enter Hungary without restriction with a valid Schengen visa in spite of the Ukrainian crisis. It is no longer necessary to show a COVID 19 vaccination certificate or a PCR test. Read more about covid restrictions in Budapest

In the museum on the first floor there is a café where you can taste the famous Hungarian cakes, such as Esterhazy, named after the famous Hungarian aristocrat, or the Dobos cake, invented in the XIX century especially for long storage and very loved by Empress Sissy, and of course the numerous marzipan sweets and cakes. 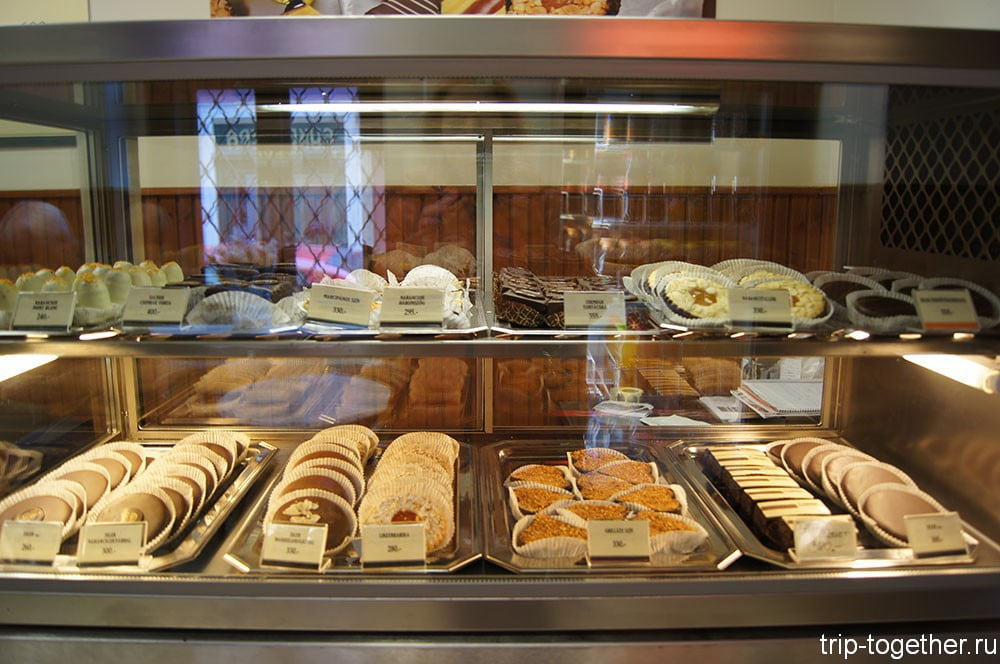 The pastries on the first floor of the patisserie

On the second floor there is a marzipan exposition, which I invite you to walk around, but first, a little about the history of marzipan and biography of the founder of the museum, so you can better understand how such an unusual museum was formed.

How to get from Budapest to Sentendre, you can read in a previous article. There you can also read about other sights and beauties of Szentendre. The Museum of Marzipan in Szentendre is located at Dumtsa Jenő utca 12-14, no more than a 10-minute walk from the train station.

From the history of marzipan

Just in case anyone does not know, marzipan is the almonds ground into flour, mixed with powdered sugar. Sometimes you need to add a little water to make a sweet, pliable mass. It is said that you can make marzipan from quality almonds without adding water, there is enough oil in almond nuts to bind the powdered sugar. At the entrance to the museum, you can peek at the process. Right before the eyes of the venerable public, marzipan figures are being molded. 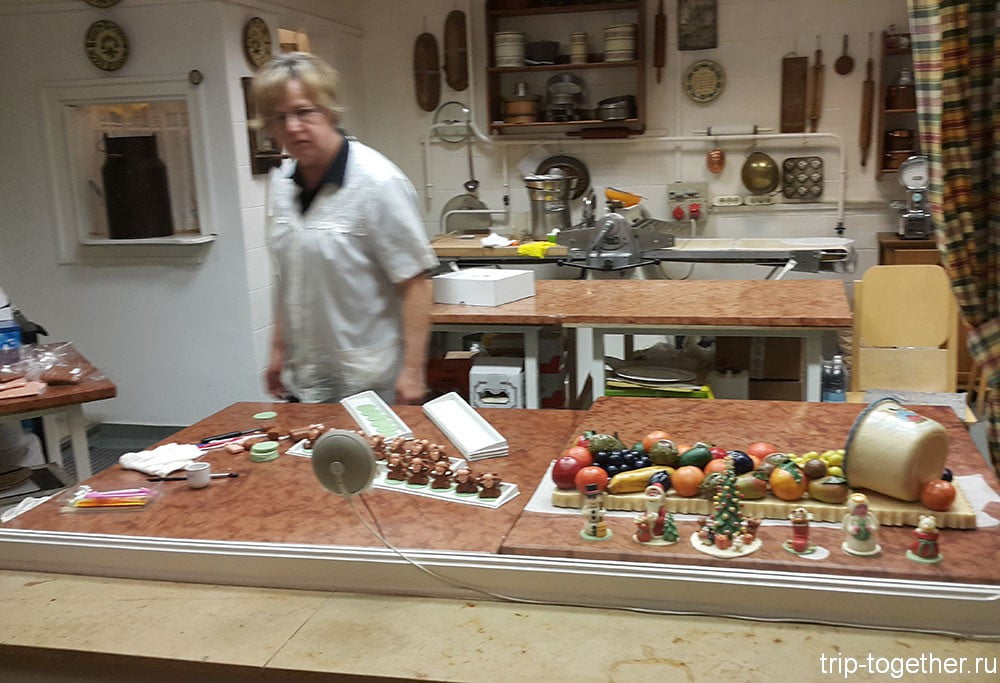 The first mention of marzipan dates back to the Middle Ages. Marzipan came from Persia in the XIII century. For the first time marzipan mass appeared in Venice, and the word “marzipan”, according to one version, came from the phrase “bread of St. Mark”. However, some researchers believe that the word “marzipan” came from the Arabic word “mautaban”, as the Arabs called the Byzantine coin with Jesus sitting on the throne.

The rich tradition of marzipan candy production survived in Lübeck, and existed in Königsberg, until it became Kaliningrad. Which once again testifies in favor of the maritime routes of distribution of the sweet delicacy. 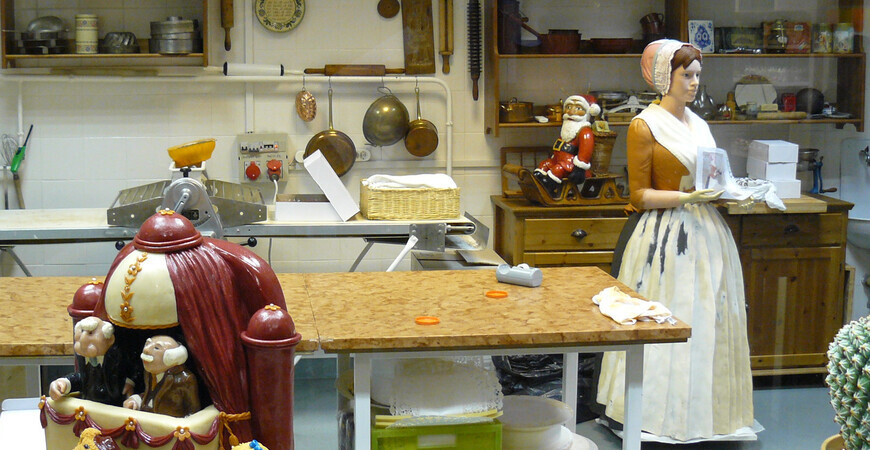 In the suburbs of Budapest town Szentendre there is a famous all-Hungarian museum of marzipan. There are several such museums in Europe, and some of them, in one way or another, are associated with the name of the “king of marzipan” – the Hungarian cook Karoly Szabo.

Marzipan became known around the XVI century, that’s when recipes for this delicacy first appeared in cookbooks. It has always been used to decorate Christmas holidays, but the new life was given to marzipan in the XX century. Karoi Szabo, who came from an old Transylvanian culinary family, studied for many years in Beirut. Then he moved to Puchberg, Austria, and opened a small pastry shop there. At first, the business didn’t pay off: he only succeeded when he realized that marzipan is not only tasty. It is also an excellent material for making beautiful and amusing figurines, because in terms of consistency it resembles plasticine the most. The fame came to him when he molded from marzipan and put in a showcase a huge figure of Mickey Mouse, the most popular cartoon character at that time.

The Szabo Museum and Samos factory

In the mid-nineties, after the death of his wife, Karoj Szabó moved to Hungary, opened his factory in Szentendre, and created two marzipan museums: one in Szentendre at the factory, and another in Budapest. Now he has retired from business, and the business is divided. The Szabo family still owns the museum and the production in Budapest, while the museum in Szentendre is based on the production of another confectionery house, Szamos, so the official name of the museum is Szamos Múzeum Cukrászda. It was founded by the Parisian restaurateur Mátyás Szamos. Under the same brand in Budapest also opened the Museum of Chocolate.

Museum in Szentendre occupies two floors: the first floor contains the manufactory itself and a large store, while the second floor is occupied by the exhibition. The manufactory itself is designed like a museum exhibit: through the glass you can observe the process of production of marzipan figures, which immediately go to the store next to it. In the store one can buy not only ready-made marzipan figures of different kinds and just marzipan mass, from which one can mold anything, but also chocolate figures: in recent years Szamos confectionary has specialized in this very specialization.

The colorful and festive exposition consists of figures and paintings made of marzipan and covered with multicolored glaze. Visitors are welcomed by a huge snow-white marzipan wedding cake. It took 970 eggs and 25 liters of cream to make. Here you can see:

In addition, there are many figures of fairy tale characters and whole marzipan scenes from classic fairy tales. Some of them are crude, but there are real masterpieces: for example, a marzipan furniture set covered with “lace doilies” made of glaze, or an entire showcase of perfectly indistinguishable from real blooming cacti. Russian tourists are invariably delighted by the bust of M. Gorbachev, which has been standing here since its founding. It is partly reminiscent of a wax museum: the entire history of Austria-Hungary is represented in amusingly sweet exhibits. Many of them were personally created by Karoly Szabo himself.

The museum is quite crowded, so if you’re coming alone rather than with a tour, it’s better to come here in the morning: in the afternoon during the tourist season tour groups come here one by one, and in the store there are long lines. Keep in mind, though, that Szamos confectionery products are also available in Budapest. Likewise, many of the figures have been copied for Samos’ outlets in the Hungarian capital: for example, the marzipan parliament can be seen in one of their pastry shops at the Grand Hotel Royal.

The museum is open every day from 9 to 19, except Saturdays and Sundays, when it opens at 10 am.

Typically, a visit to the museum as part of various guided tours of the Budapest region, which offer numerous agencies and tour operators. Through them, you can also order a tour with a master class on making marzipan figurines. The cost of tours depends on the specific operator, directly through the site they are not offered.

If you are staying in Szentendre, the easiest way to get there is on foot: the town is small and all the attractions are nearby. The marzipan museum is located in a pedestrian zone near other popular museums and stores. As a rule, there is a need to travel by public transport for those coming from Budapest.