The Musikinstrumenten-Museum (MIM) Berlin (official name: State Institute for Music Research Prussian Cultural Heritage ) contains about 3,500 instruments, one of the largest and most representative collections of musical instruments in Germany. Since 1984, it has been located at Tiergartenstraße 1 in central Berlin, near Potsdamer Platz, in the Tiergarten district . In 2019, the Museum of Musical Instruments was visited by 53 thousand people.

The museum began in January 1888 as the “Collection of Antique Musical Instruments” by Philipp Spitta and Josef Joachim at the Royal Academic University of Music in Berlin. The city of Berlin acquired the first 240 antique musical instruments from the instrument collection of the Leipzig music publisher Paul de Wit . Among these were a harpsichord with two handles from the workshop of Gottfried Silbermann, a pair of timpani from a Saxon church, and a Rauschpfeife.

The rest came from the Museum of Applied Art. In addition to the collection itself, the museum also had an educational and entertaining function; among other things, music students should be able to listen to old music as appropriately as possible. This teaching assignment led to the first institute becoming a municipal inn on February 14, 1893. There was no celebration at this opening, and “none of the ministerial officials were present.” Originally the MIA was located on the second floor of Berlin’s old building academy .

At the end of World War II, many of the exhibits were lost.

Since 1936, the museum has belonged to the State Institute for Musical Research (formerly: State Institute for German Musical Research) and therefore, since 1962, it is part of the Prussian Cultural Heritage Foundation . Since 1984, the museum has been located in a building designed by Edgar Wischnewski and opened on February 14, 1893, at Kemperplatz, next to the Berlin Philharmonic at the Kulturforum Berlin . About 800 exhibits are on permanent display here and, if they can be used, are regularly shown.

The Museum of Musical Instruments (MIM) and the State Institute for Musical Research (SIM) form a unit in Berlin. Its building was constructed in 1979-1984 by Edgar Wisniewski according to the design of the architect Hans Scharun, who died in 1972, next to the Berlin Philharmonic . The details of the facades and the layout of the building on the site symbolically demonstrate the unity of performance and research. The playing of historical musical instruments takes place in a large hall suitable for display, around which a gallery runs. The museum is one of the few places where the cinema organ can be demonstrated. This instrument, known as the “Mighty Wurlitzer”, became the property of the museum in 1982 as a “free transfer of title to the Federal Republic of Germany. Previously it had been in the concert hall of the villa of Werner Ferdinand von Siemens (Correns estate), grandson of the founder of Siemens, in Berlin-Lanquitz. The instrument is played every Thursday after the guided tour of the museum at 18:00 and every Saturday at 12:00. Learning Instrument (organology) as a discipline of musicology can be experienced in many demonstrations. The museum has its own Curt Sachs Hall, which is used for regular chamber concerts. 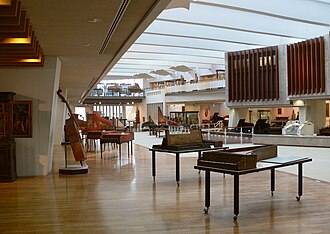 The Berlin Musical Instrument Museum collects and displays musical instruments of European art music from the 16th to the 21st century. Some 800 of the more than 3,000 instruments are on display, including a collection of wind instruments from St. Wenzel-Zu Naumburg from the first half of the 17th century. Tours convey the sound and technical characteristics of historical musical instruments. The CIM History Department is developing a “history of music theory,” which is being published as a series of books on behalf of the institute.

There are in the collection.

The text is available under a Creative Commons Attribution / Share Alike license ; Information about the authorship and license status of integrated media files (such as images or videos) can usually be called up by clicking on them. Content may be subject to additional terms and conditions. By using this site, you agree to the terms of use and privacy policy. Wikipedia® is a registered trademark of the Wikimedia Foundation Inc.

The Museum of Musical Instruments is located in the heart of Berlin on Potsdamer Platz, and very close to the famous Berlin Philharmonic building, which is world famous as a famous concert hall. This was the idea behind the unification of Berlin’s musical center. The museum displays a wide variety of musical instruments.

One of the most precious instruments in the world is the harpsichord of Yolande de Polignac, a favorite of Marie Antoinette. An important feature of the museum is not just that it has a unique collection of instruments, but that there is a great deal of history behind them.

The harpsichord was the favorite instrument of the French nobility. The Marquise de Polignac bought this instrument for Versailles. She may have played it herself in the presence of Queen Marie Antoinette. The French Revolution not only wiped out the crowned heads, but also many of their musical instruments. By some miracle, this harpsichord escaped the flames and was long considered lost.

The flutes of the Berlin instrument museum belonged to Frederick the Great, the famous Prussian king. Frederick the Great was very fond of music and played the transverse flute. He received lessons from the court flutist Johann Kwanz. Incidentally, Quanz not only taught the king to play the instrument brilliantly, but in addition, Quanz improved the instrument itself. As for Frederick, he became famous after his victories and was a great general and always found time to play the flute.

The flutes kept in the museum are true jewels. They are kept in luxurious cases decorated with leather and gold. These flutes are of the most complex technical construction. They are made up of several assembled parts, and the height of the instrument’s sound, depends on how it is assembled. The museum has a flute carved from walrus tusk, ivory, and there is even a flute that could be used as a cane.

Frederick the Great’s grandmother, Queen Sophia – Charlotte – was very intellectual and had a great love of music. She received a very original harpsichord as a gift from her cousin. It was a marching harpsichord that was brought back from Paris. There is evidence that Frederick the Great took this instrument on military campaigns, for even on his campaigns he played the flute and another musician accompanied him on the harpsichord.

The museum has a unique collection of instruments for travelers . People of all eras have sought to surround themselves with music. Of course, nowadays we are accompanied by all kinds of portable players, and other electronic sound carriers, but at that time inventors had no choice but to design more and more new instruments for those who could not do without music when traveling or walking.

When one speaks of antique instruments, the first thing one thinks of are Italian violins . The Berlin Instrument Museum has beautiful instruments from St. Petersburg and Venice. 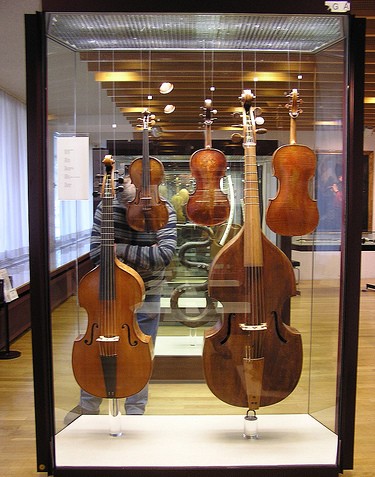 Wolfgang Amadeus Mozart composed for clarinets that are on display in the museum. This clarinet he designed together with his friend Anton Stadler. This clarinet has an extra hole at the bottom and is called a basset horn or bass clarinet.

Anton Stadler was one of the first clarinetists to perform as a soloist. It was a rarity then, the clarinet was still very imperfect. Stadler’s acquaintance with Mozart was fateful for music. Mozart dedicated several of his works for clarinet to the musician. Since that time, the clarinet has changed greatly, and its capabilities have become richer. The bass clarinet is quite unusual for its time. The only instrument of its kind that was created especially for a Mozart concert is in the Berlin Museum.

The building and interior of the museum resemble a ship. A ship traveling through the pages of history. On the decks sit the passengers, musicians from different eras, while we, the traveling companions and onlookers, can admire the perfect beauty of the instruments as well as hear their voices and the details of their making.

The Berlin Instrument Museum has special relics, such as the cabinet grand piano, which was made in Vienna in 1810 by the master piano-maker Josef Brodmann, who mentored Ignatz Bezendorfer, the famous maker of the fine grand pianos on which Liszt played. And the instrument that stands in the museum was bought from Brodmann in 1819 in Vienna by the great composer and pianist Carl Maria von Weber. This Weber piano was long kept by his sons, and then it was in the royal library. When the instrument museum was opened in 1880, the King of Prussia donated the grand piano to the museum. The museum sometimes hosts concerts by pianists, and the museum staff is happy that it still sounds so beautiful.

READ
Indira Gandhi Museum in Delhi, How to get there and exposition

The Berlin Musical Instrument Museum is called the “living museum” because it often hosts concerts. because it often hosts classical music concerts. And those who are interested in more than just classical music can hear the sound of an instrument with the interesting name “Wurlitzer organ”. This instrument can replace an entire orchestra, and even imitates noises, like a real synthesizer. It was invented in the 1920s to accompany silent films and theatrical productions, and for almost 100 years now it has been delighting listeners and giving musicians the chance to express themselves creatively.