In the museum under the distinctive name “Forbidden Zone” you can see unique exhibits created by the hands of prisoners.

This institution is probably one of the most interesting museums of Uglich. “The Forbidden Zone” was opened in this city in the summer of 2004. Since then, the museum has gained popularity among both locals and visitors to the city.

The museum catches the eye a model of a prison cell – with bunks, a bench, a washstand, a vessel for defecation, a table and utensils and other items on it. This is the small hall of the museum. Here you can see wax figures of prisoners dressed in striped robes. Interesting fact: the figures of prisoners were made from real prototypes. This museum room recreates prison realities. You can first look into the room through a peephole in the door with locks and bolts, seeing the cell as the warden sees it during his inspection. You are then given the opportunity to find yourself inside. After the guide has told you about it, you can dress up in a prison robe and take a picture of yourself in the cell. It should be noted that photography and videotaping in this museum are allowed for an additional fee.

However, it is worth visiting primarily because of the museum’s collection of objects that were made by prisoners. Impressive is the wide range of objects behind the display cabinets, which are grouped according to technique and purpose. Here you can see, for example, weapons (both cold and firearms) seized during the search, in the production of which various improvised means were used – including pipes, plastic bodies of lighters, aluminum spoons.

Various technical gadgets exhibited here are capable of surprising the skill of their makers: a tattooing device (a mechanical razor was used in its creation), electric boilers, tees, even a real radio receiver. You can also see a moonshine machine. But, to be fair, it is worth noting that it was not made in a prison cell, but in a settlement.

Some exhibits of the museum are also noteworthy because they give visitors a better understanding of the everyday life in the prison and its peculiarities. Here you can see, for example, what is known as a “brosse”, a twisted plastic bottle used to hold alcohol and thrown over the fence for inmates. Another item of prison life, also seen here, is the chifir tank, a pot used to make chifir, a very strong drink made from highly concentrated brewed tea, popular in the prison environment.

Another characteristic attribute of prison conditions are the letters that prisoners exchange with their loved ones who are on the outside. Such exhibits are presented here with an appropriate signature from criminal jargon – “malawyav”. You can also see what kind of certificates are issued to prisoners after their release.

The objects designed to diversify the prisoners’ leisure time look interesting: rosary beads made of different materials, checkers, chess and backgammon. The guitar is made of papier-mâché, the soundboard is made of a board, the strings are of corded string, and screws are used as pins. It is interesting that when you play this instrument, you can hear the pitiful sounds, resembling crying. Also of interest is a set of cards, in the making of which images of various political figures published in newspapers were used.

A rather wide range of exhibits is represented by a series of art objects created by prisoners. Among them you can see, for example, souvenirs made from a variety of materials: a mixture of bread crumbs with salt and ashes, wood, wire, fabric, etc. Fans of paintings will certainly be interested in this museum, which reflect different themes and genres: you can see as portraits as well as, for example, landscapes. For example, one of the portraits with the caption “Dear daughter Natasha” depicts the daughter of a prisoner. Curiously, the portrait is done on a prison sheet. The technique used to create this picture is interesting: it was painted in ink, and after the drawing was completed, the fabric was soaked in salt water – thus the image was “fixed”. The picture can also be depicted on a certain surface by using different materials: oil, wire, ballpoint pens, metal shavings, stone chips.

Particularly popular in prison art, as you can see, are religious themes. Here you can see the icons, which are characterized by a very clear drawing, as well as a significant number of small elements. One of the icons here is framed in a copper frame inlaid with broken glass. One prisoner in the northern penal colony burned an image of the Sistine Madonna on a large piece of plywood with a red-hot nail. Another convict managed to carve a miniature model of a temple with an iconostasis out of wood. Curiously, he did this with self-made chisels and cutters. Here you can also see the face of Nicholas the Wonderworker, which the author depicted using two ballpoint pens, as well as various other things that reflect the religious theme.

In addition to the unique entourage of this institution is the fact that the guide introduces visitors to the exhibition, while dressed in a guard’s uniform. Curiously, it is possible to order a tour in an ordinary language as well as in slang, which should further contribute to the immersion into the atmosphere of this place. An interesting addition to the exposition is also a museum shop, where you can buy specific items as a memento of your visit to this place, such as an encyclopedia of prison tattoos, a dictionary of slang. In addition, here you can buy mugs, plates and other souvenirs of commonplace character. 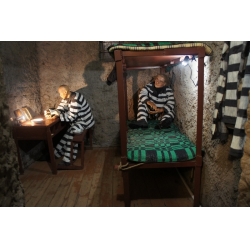 The town of Uglich is a small place, only 30 thousand inhabitants, and at the same time there are more than 20 museums in it! And interesting themes – I would visit all of them with pleasure. And the “Museum of Prison Art” would be in.

“The sun rises and sets, and it’s dark in my PRISON. “

No matter how much the supporters and opponents of this unusual museum in Uglich break their spears, you have to admit: there is always a full house here. One wonders why people come here? To tickle the nerves or to show the children (for educational purposes): “Here.

The Uglich Museum of Prison Art – awakened all kinds of feelings in me!

Hello, my dear friends. Today I want to tell you about a rather interesting museum in the city of Uglich, which we visited during our first cruise in July of this year. Of course, we have visited it many times before.

A museum for the amateur.

Prison and art: two things incompatible? Enthusiasts from the town of Uglich in the Yaroslavl region thought they were compatible, and opened a museum of prison art called The Forbidden Zone. The only museum of its kind in Russia, by the way. Located.

On the road and in prison, friendship is always born and a person’s abilities are more vividly manifested

Museum of prison art – I would call it a museum of folk art Samodelkin. The museum, of course, I can’t say it’s clever and informative. It just tells and shows that when a person has a lot of free time, he has.

What lies behind the heavy metal door

It’s the kind of museum I’ve never seen before. It stands out for its uncommonness and vivid theme. Very small, a group of 15 people could barely fit in. The bottom line is simple: the museum recreates the camera as it was.

The museum showcases the products that prisoners make from improvised means. The ingenuity of some things is amazing. The museum itself is quite small, divided into two parts. The first is an exhibition of the products themselves, as there is a guide, which is enough.

From prison and from hell.

During a trip to Uglich, which I recently wrote about, we visited several local museums. I would like to tell you more about one of them – the museum of prison art. The museum is located on Olga Bergoltz Street, 1.

It is interesting and unusual.

I stayed in the museum 2 times and was attracted by the unusual name and the theme. The museum itself is very small, just 2 rooms, the first checkout counter and souvenir store (handicrafts of prisoners), the second “cell” itself as in a real prison.

Another world where time is infinite

The Museum of Prison Art in the city of Uglich is a small room of two rooms. In one room are the works of prisoners. What is amazing is the flight of fancy and endless craftsmanship. And it is quite unusual craftsmanship and unconventional imagination) For example, a large.

Quite an interesting museum

The Museum of Prison Art in Uglich is quite a curious museum, though very small. It appeared here, most likely because the life of the city was historically associated with the prisoners of the camps, which participated here in the construction of Uglich.

The Museum of Prison Art is located on O. Bergoltz Street, practically next door to the Museum of Russian Vodka, which looks somehow symbolic. Steal-drink-jail, as they say in “Gentlemen of Fortune. The entrance ticket costs 70 rubles, plus 50 rubles.

I don’t know why, but for some reason I find museums of this kind more interesting than, say, the Matryoshka doll museum. And this time, planning a trip to the glorious city of Uglich, I planned a visit to this institution as an obligatory point. In principle Uglich city.

We heard about the museum on the internet and decided to take a look. In general we very much like to travel to cities and countries. And this museum left its mark and memories.

Hello to all the readers of Otzovik. In our small but wonderful city of Uglich, there are some amazing museums. For example, “the Museum of myths and superstitions”, and “Museum of prison art, and I want to tell you about it. I was in it.