What to see: museum exposition, process of making figurines from wood Where: the village Yantarny, Kaliningrad region How to get there: from Kaliningrad bus station to Yantarny buses go very often; from Svetlogorsk – also quite a lot of buses, but you should see the schedule beforehand (buses are “from below”) ; from Zelenogradsk – very few buses. You should go to the stop “Amber castle”.

In 2002 the woodcarver Mikhail Semenov created a museum of Russian superstitions. Among the exhibits of the museum are statuettes of ancient spirits, characters of fairy tales and folk beliefs.

A sign with the following text hangs at the entrance of the museum: “About belief in omens Question. If a black cat runs across my path, there’s bound to be trouble. Why? Answer. Because we believe in it. Although our Russia celebrated the millennium of Baptism, the spirit of superstition, paganism still remains. And people believe: a hiccup – someone remembers me; a sneeze – the truth to tell; in the ear ringing – the news will be; itchy nose – to drink; palm – to money; a cat ran across the road – bad luck; a spider descended – to the news; a spoon fell from the table – a woman will come, and a knife – a man. And a lot of other omens. We give a special magical meaning to each natural manifestation. According to our faith it will be!”

The museum, aka the workshop. The creator of the museum himself says that he does not believe in omens and is interested in them only for practical purposes.

Mikhail’s profession has nothing to do with woodcarving, and he began carving only in his fourth decade.

The museum exposition takes up one small room

And this is a creation of the wife and daughter of the creator of the museum of Russian superstitions.

Zherdyay (in the center of the photo) The most useless spirit with a destiny devoid of any sense. Long, skinny, staggers through the streets at night, warms his hands in a chimney, peeks in windows, frightening people in vain Mushrooms grew on the wall – to wealth. Find them and don’t pick them – they won’t grow again.

Woodsmen (two small figures on a branch) Grandfather and grandmother of the woodsman. Small, hedgehog-like, nimble forest spirits. They stay awake from the end of summer to mid-autumn. All this time they have fun, they lead round dances, amuse the woodsman, rustle with leaves, rummage, and have a long, long sleep. There is a wizard in every forest. He is a full master there. If he walks through the forest, he is as tall as the tallest trees, but at the same time, going out for fun and walks on the outskirts, he goes below the grass, hiding behind any berry bush. Mistletoe is able to laugh, hoot, whistle, and cry in a human way, and it becomes voiceless, then only when met by living people.

Mistletoe’s nest is a devil’s nest, you should be careful with this plant. In the nest of the blackbird, one can find a stone that brings good fortune; in the nest of an eagle – a firebrand, or eagle stone, which protects its owner from fire, disease, and spoilage. For hens to be fertile and to lay only in their own backyard, Christmas straw is placed in the nest of the hen.

The shishiga (bottom of the photo) is small, hunchbacked, groggy, with hooked hands. It sleeps during the day, but at night it grabs stray passersby and drags them into the water. Its domain is shallow reservoirs with creeks covered with reeds.

Boroviks Little old men, mushroom masters. Look quietly under milkcocks or boletuses, if you don’t make any noise, they might show up.

Keys Don’t put keys anywhere, don’t knock them, don’t throw them on a table, otherwise a quarrel at home will come out

One-eyed Dicho rushes blindly at anyone, poor or rich, not caring. Sometimes it will bypass a wicked, sinful man, and will pile on the good and hard-working man and will sit on his neck, legs hanging down.

Cattle’s Death A creature who brings doom to the peasant herd. Appears on Agothea as an ugly, malicious old woman with rake hands. It is possible to escape from her only by beating her with aspen logs or by performing the ancient ritual of ploughing the village; the Cow Death does not walk across the ploughing line.

The Basilisk hatches from an egg, which once every hundred years is allowed to be laid by a rooster and which a young maiden carries under her armpit for six weeks. Some basilisks have a rooster’s head and a dragon’s body, and the sight of a dragon makes people die.

Evil spirits, tiny creatures without eyes, tongue and ears, which does not prevent them from bringing all sorts of trouble to the owners of the house

Yard Spirits run the yard and the barn. Picky and capricious, but the elders knew how to please and amuse Dvorovogo. Otherwise he will get angry – you will be in a lot of trouble! After all, he loves and cherishes only raven and gray horses, and white, for example, the smell can not stand. So he has to let in the horse of a bad color into the yard no other way than through the coat, spread out in the gate sheep-sheep-sided up.

Vosturukha Good house spirit. Lives behind the stove and watches out for thieves. Nothing bad can happen in the house where Vosturukha lives, nothing is lost from this house – neither property, nor beauty, nor purity of the young girls living in it.

Bottle On the table should be an odd number of bottles, the empty ones should be removed immediately, so that the “Full Cup” is not empty in the household. See bottles in a dream – to drink.

In the old days, it was impossible to wish good luck to the hunter, because the wish could hear the evil spirits. Therefore usually wished the opposite, saying for example: “Neither feather nor fluff!” (i.e. not to bring any prey).

Until 2008, the museum was located on the Curonian Spit near the Museum of Nature, but because of the disagreement with the owners of the premises, Mikhail Semenov moved to another place. Nowadays the museum is situated in the village of Yantarny, in the museum complex Yantarny castle.

The Museum of superstitions on the Curonian Spit

The Museum of Russian superstitions was opened in 2002. All its exhibits are created by an amateur artist Michael Semenov and his wife Irina. From the path of the museum complex shows us the way.

The museum is located in a forest cabin, the owners live here.

At the door the motto of the owner.

On the first floor of the museum you can see the familiar witch.

But not everyone knows the Basilisk.

The Basilisk hatches from an egg, which once in a lifetime is laid by a rooster. The Basilisk has a rooster’s head and the body of a dragon, its gaze makes people die.

Another creature is the Woolly Man.

It is a furry night demon, crushing a sleeping person. More often he crushes jokingly, but if he gets angry, he can strangle.

Next to the other witch is the Swapmaker.

The demons love to stir up the resurrected and the abandoned.

On the shelves are arranged more than 80 characters of Russian superstitions. 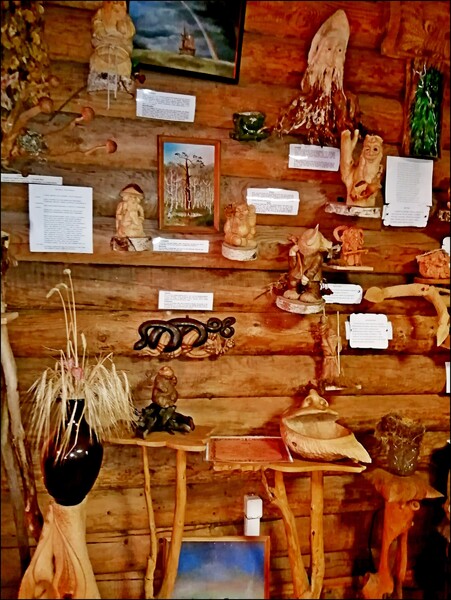 The pottery is made by Irina Semenova.

READ
Museum of the History of Cognac in Moscow, description and tasting 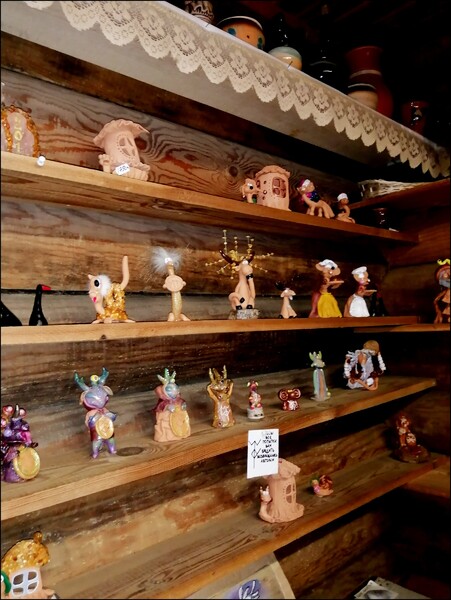 On the second floor there is an exposition with a different theme, it is called “Fellow countrymen”. These are unusual people, you could say weirdos, left in the memory of people because they were “not like everyone else”.

From the age of 16 after the battle with the crusaders, he waved the axe in clashes with the knights, and then went to Novgorod to seek his share.

“Plague Doctor” Conrad Hübner was killed by marauders. After one o’clock in the morning he went around the plague patients in a long robe, a black hat, with a bunch of garlic and a mask in the shape of a raven’s beak, into which was stuffed a corpse soaked in vinegar.

Father Fray the monk urged asceticism and abstinence among the townsfolk, and died of gluttony himself.

nicknamed Badger because he liked to snooze every chance he got. He saved his own life by the fact that when robbers attacked the warehouse, he was sound asleep.

Catwoman Paulina Furst is remembered for picking up all the cats in the area, sometimes even those that had owners.

It’s very interesting to get to know the “countrymen,” and there are more than 40 figurines in this collection.

On the first floor you can see the workshop and buy a souvenir.

The museum works from 10 to 17 on the territory of the Museum Complex in the National Park “Curonian Spit”. You should pay 100 rubles in cash to get in.