In metropolitan Delhi, the most interesting things are the temples of different religions, the Red Fort and the city parks. There is the Lotus Temple, central to the Bahai religion, and the National Museum, which has the largest collection of artifacts in India. More Delhi attractions can be seen in the thematic section.

Do not take the most popular Indian resort state Goa only as a place for a beach vacation. If you want you can make a very diverse tour program by visiting Indian attractions: temples, churches and mosques, museums, historical districts. For example, the Basilica of Jesus in Old Goa, the elegant architectural ensemble of Largo da Igreja in Panaji, the main temple of Goa – Sri Mangeshi. From the resorts it is not far to the beautiful Dudhsagar waterfall, the second largest in India. The best place to walk and buy souvenirs is 18th of June Street in Panaji.

Mumbai, the capital of the Indian film industry, where Bollywood pavilions are located

The huge triumphal arch – the Gates of India, the Fountain of Flora in the ancient Roman style attracts the attention of tourists. The planetarium of the Nehru Science and Cultural Center, located in a notable modern building, can be visited on tours

The largest exhibit in the city is at the Prince of Wales Museum. The best place to relax with kids is the huge water park and Esselworld amusement park.

India’s most recognizable architectural landmarks in Jaipur, the “Pink City,” are located in the old quarter, where most of the stone houses have a distinctive pink or terracotta hue. The city is home to the grand Maharaja Palace, the Albert Hall Museum, originally conceived as the city’s assembly hall, and the huge Jantar Mantar Observatory. In the suburbs of Jaipur stands the legendary Amber Fort, now home to a museum and observation deck.

The Calcutta (Kolkata) is famous for its Kali Temple, the Alipore Zoo, India’s largest zoo, the ancient Indian Museum with ancient fossils and meteorites among other exhibits, the Victoria Memorial, and St. Paul’s Cathedral.

About the place International Toilet Museum

The International Toilet Museum is a collection of utilitarian exhibits from ancient times to the present. In the exhibition visitors will see not only pots and toilets of different shapes, colors and sizes, but also related accessories, among which, for example, bidet covers on the toilet bowl and other modern sanitary equipment.The exhibition of the museum collection in Delhi is viewed from different perspectives. The first is historical. The oldest item, which is already more than two and a half millennia old, that is, the object performed its function already in that era, at a time when ancient Rome was not yet quite ancient, but only emerging young state. Each period: the Middle Ages, the Renaissance, the New Age, carries its own way of life, presented for the observation of visitors. To make it easier to feel in the shoes of the contemporaries of the exhibited items, some of the rooms are filled with a specific atmosphere with the help of chemicals. The collection can be viewed from an aesthetic perspective. There are gilded and painted exhibits, latrines decorated with carvings and fine embossing, stylish and sterile white toilets, urinals, and bidets. Some items are true works of art that can be admired for hours. If only you can distract yourself from their direct purpose. Admirers of celebrities will be surprised by the Louis XII special throne in the museum, as well as Queen Victoria’s toilet and the stool of Elizabeth I. The true pride of the International Toilet Museum is a replica of the unique throne of Louis XIV, which has a hole for the satisfaction of natural needs. In addition to the latrines of monarchs, the exhibition includes a number of accessories that belonged to people of lower rank. Progressive tourists will be able to see at the International Toilet Museum in Delhi that man is very inventive. Displayed side by side an ordinary pot and a toilet bowl equipped with bidet function clearly demonstrate the far-reaching idea that has made the natural process useful and more desirable.Meaning At the Sulabh Museum one can spend time in a rather informal atmosphere, which only amuses the public. It was Dr. Bindeshwar Pathak who initiated the organization of such an unconventional exposition. He was also the founder of the volunteer environmental organization, whose activities were aimed at addressing issues of waste disposal, as well as finding alternative energy options. Opened the International Toilet Museum in Delhi on the grounds of the organization’s main headquarters. The collection of the museum does not only have an entertaining mission, but even more its purpose is to draw public attention to the grave sanitary situation in the world. This is especially true in small towns, which have almost no sewage treatment system. This leads to the most dangerous epidemiological situations. 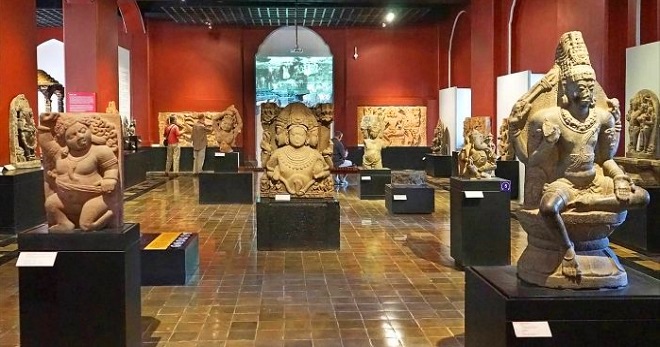 India’s history and culture are extremely diverse, but many of its museums, of which there are more than 800, still suffer from a lack of technical equipment, the result of decades of neglect. In recent years the situation has started to improve. Wealthy Indians are investing in better design and creating interactive exhibits, attracting tourists to learn about the history of the country.

15 most interesting museums in India

We offer you a list of the most visited institutions in the country: