Since its foundation in 1818, the National Museum in Prague has a rich collection of exhibits. Several million items are housed in the main building and other exhibition spaces. The main building, inaugurated on May 18, 1891, adorns Wenceslas Square. 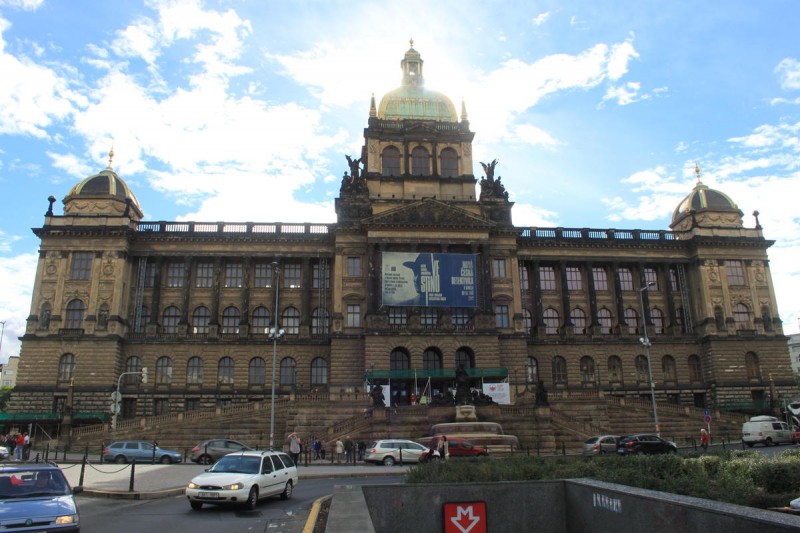 This imposing monumental neo-Renaissance building is more than 70 meters high and its facade is about 100 meters long. It is decorated with four domes on the corners and one beautiful dome in the center. Underneath it is the Pantheon, a collection of statues and busts of famous figures of Czech science and culture.

The main facade attracts attention with a group of sculptures. In the middle sits the patroness of science and art Bohemia, as the kingdom was called in the 12th century. Next to her a young girl representing the Vltava River and an old man the Laba (Elbe) River. All three are an allegorical representation of Bohemia, Moravia and Silesia. In front of the building is another landmark of Prague – the monument to St. Wenceslas, whose name the square bears.

Every visitor is amazed by the lobby decorated with sculptures by the famous Czech artist Ludwig Schwanthaler. The central hall, where the Pantheon is located, is accessed by a grand staircase. Paintings by famous Czech artists depicting sixteen castles of Bohemia are hanging on the walls.

Collections of the Main Building

The prehistory and protohistory department keeps a collection of items that were in people’s possessions over a thousand years ago. The most valuable and interesting things in it are the exhibits of Roman and ancient Greek art. 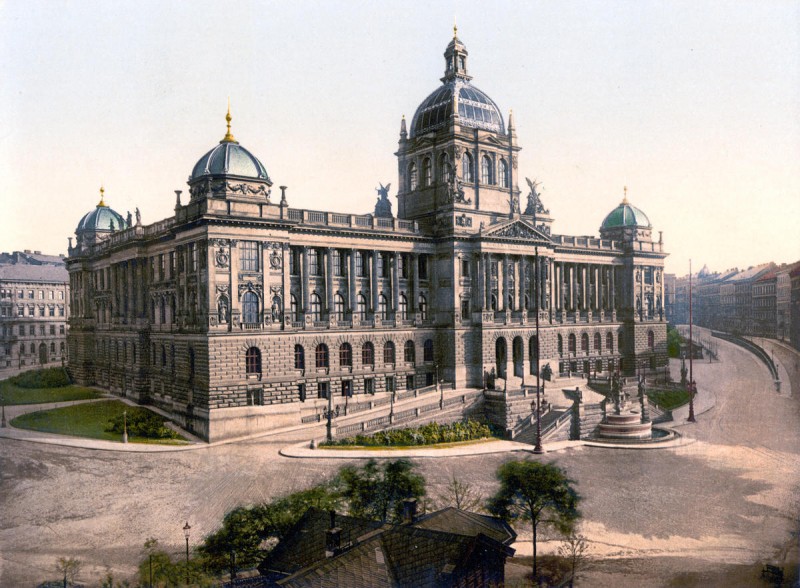 The department of archeology is an extension of the prehistory department and allows to trace the development of Bohemia itself. Part of the collection is devoted to the Jan Hus movement and the Hussite wars in the 15th century. The collection is supplemented by items referring to other important dates in Czech history. The collected artifacts from different epochs have not only a historical but also a high artistic value. These are the famous Bohemian crystal and glass from the 18th and 19th centuries, glass tiles from the Renaissance, a silver diadem from the 12th century and precious things from various times.

The ethnography department contains materials and exhibits about the history not only of Bohemia but also of other Slavic nations from the end of the 17th century to the present. The numismatics department is one of the oldest in the museum. A part of the collection consists of official coins circulating in Bohemia in the past and at present. Another part is represented by a set of foreign coins, especially valuable among which are coins of classical antiquity. All in all, there are about half a million pieces in the department.

The Department of Theater was opened in 1930. The basis of its collection were the archival materials of two theaters – the National Theater and the Vinohrady Theater. Today, exhibits on the history of Czech theater since the middle of the 19th century are on display here. The visitors can see the sets and puppets of the famous marionette theater, musical instruments and theatrical costumes design by famous Czech artists. 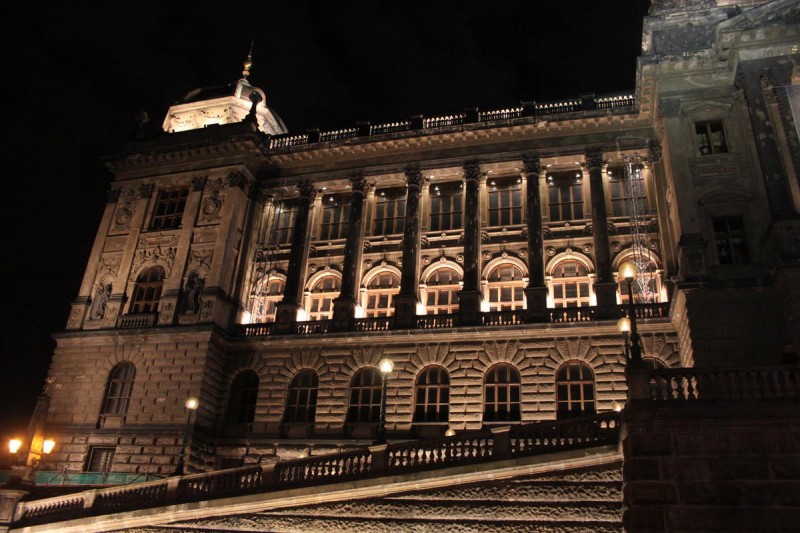 The National Museum has long gone beyond the Main Building on Wenceslas Square. It has independent museums and separate exhibitions in various buildings in Prague and even in other cities. These are the Museum of African, Asian and American Culture in Prague. The Napierstka Museum, the Museum of Music, the Museum of famous Czech composers, the Museum of Books and many others. The permanent exhibitions – the antiquities, the history of the palace and the treasure of St. Eligius are located in the Lobkowicz Palace, the collection of stone sculptures – in the Lapidarium.

Since July 2011 the main building has been closed for renovations. Upon completion, several neighboring buildings are planned to be annexed to it and form a single museum complex. There will be not only exhibitions, but also lecture halls, a children’s corner, a café and a relaxation zone, while an observation platform with a view of historical Prague will be set up under the dome. It is scheduled to open in 2018.

The National Museum, Prague is one of the oldest and most visited attractions of the Czech capital. It is a truly unique place, striking not only the number of artifacts collected in it, but also its appearance. Shall we take a closer look? 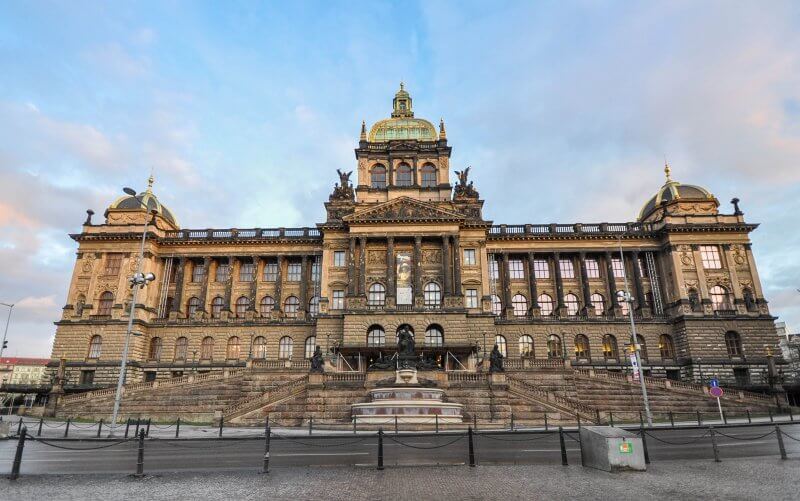 The Národní muzeum, founded in 1818, is considered one of the largest state panopticums in Prague. It has a multi-million dollar collection of paintings, ethnography, architecture, music, archaeology, and more. For years, most of these objects remained inaccessible to the public. Now almost everyone can see them. 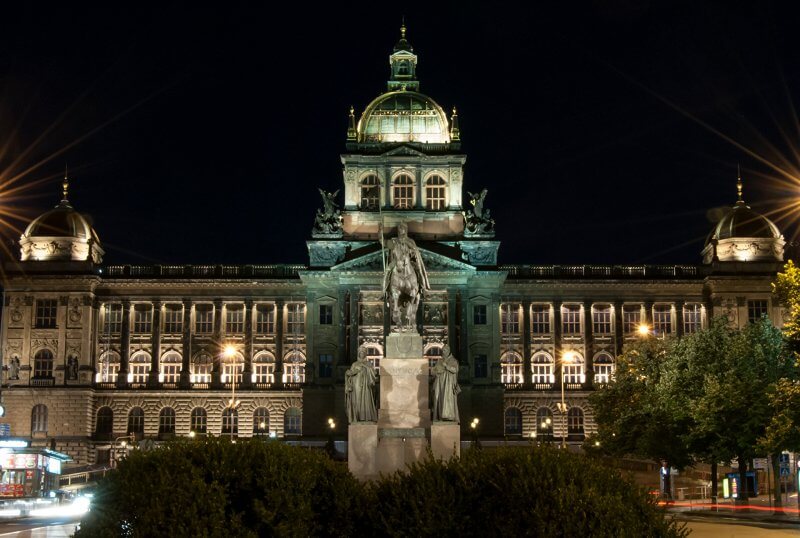 As is clear from the name, the main part of the museum exhibits is devoted to history, culture and traditions of the Czech people. However, in addition, there is a huge number of informational materials related to natural and exact sciences – botany, numismatics, hydrobiology, paleontology, zoology, etc. Besides, the Národní muzeum has an educational function, demonstrating the close cultural and historical ties of the Czech Republic with the other countries of Europe.

The National Museum in Prague, often called the repository of Czech culture, owes its creation to scholars, travelers and private collectors whose donations formed the bulk of the collections. The most famous among them was Count Caspar Sternberg, a world-renowned paleontologist, who was, in fact, the main organizer of the preparatory work. With the approval of the Viennese government, Sternberg founded the Society for the Patriotic Museum, which took possession of all the exhibits collected by that time. In 1934 the institution passed to the Czech Lands Administration, and in 1949 it was nationalized.

READ
Vatican Museums, what to see and entrance prices 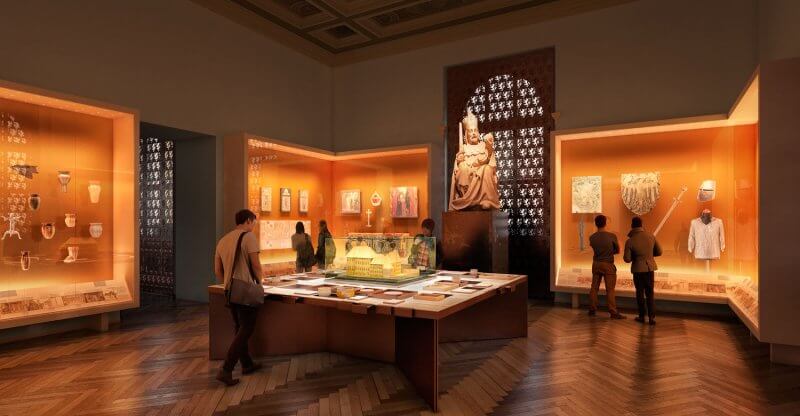 At first, the exhibits were kept in the Sternberg Castle in Hradčany, but in 1846 part of the items were moved to Nostic. It was not until 1989 that the entire collection found a permanent home – it was in the building on Wenceslas Square, which is still in use today.

Architecture and interior of the main building

The historic building of the National Museum of Prague on Wenceslas Square, designed by the talented architect Josef Schulz, is a neo-Renaissance palace. It is one of those rare occasions when the outer picture fully corresponds to the inner content. It is true that the panopticon’s architecture is striking in its grandeur and beauty.

The main façade of the Národní muzeum is decorated by an allegorical sculptural group testifying to the unity of the Czech lands. In the middle of the composition is Bohemia, the goddess of science and art, and on either side of her is an old man, immortalized by the Elbe River, and a young girl, associated with the Vltava River. Under the high dome of the National Museum, you can see the gilded names of 72 lights of Czech culture. 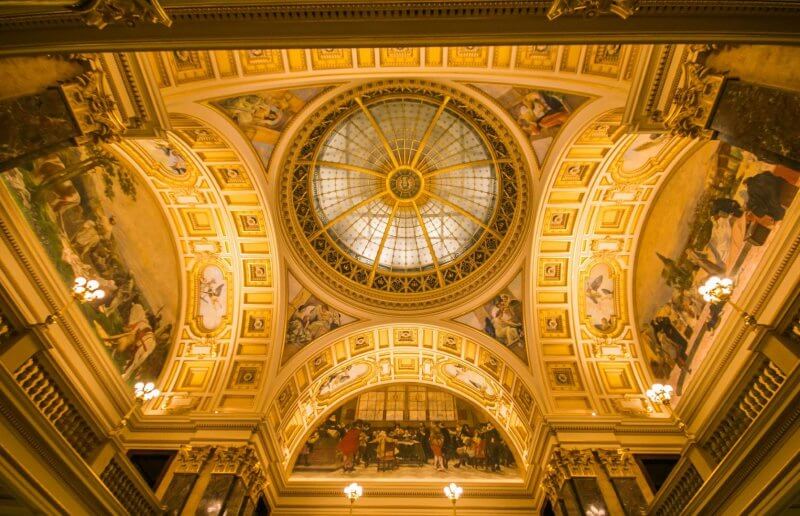 The walls of the spacious hall are decorated with pictures of historical castles standing on a beautiful scenery. Sculptural portraits of the main political, cultural and public figures of the Czech Republic are also on display. It is rumored that Bohuslav Dvořák himself took part in the decoration of the panopticon. The monument of St. Wenceslas, erected in front of the main entrance in 1912, completes the picture.

Although the National Museum in Prague has survived two wars, it has not been rebuilt since 1891.

During the renovations, the old building was combined with a new underpass. Thanks to the right approach, the administration of the institution managed not only to preserve the original appearance of an important architectural monument, but also to increase the original space by as much as 30%. The opening of the renovated historic building occurred on October 28, 2018. – on the 100th anniversary of Czechoslovak independence.

READ
Museum of Arctic and Antarctic in Saint-Petersburg

As before the restoration, there are several permanent exhibitions devoted to paleontology, geology, anthropology and history. And in the old building is a unique library, whose collections include 1.3 rare books and 8 thousand priceless ancient manuscripts.

Please note! After the restoration, the museum is gradually filled with exhibits. As of May 2019 not all expositions are on display in full.

The National Museum of the Czech Republic has long gone beyond the historical building on Wenceslas Square. It now includes several facilities scattered throughout Prague. Consider each of them: 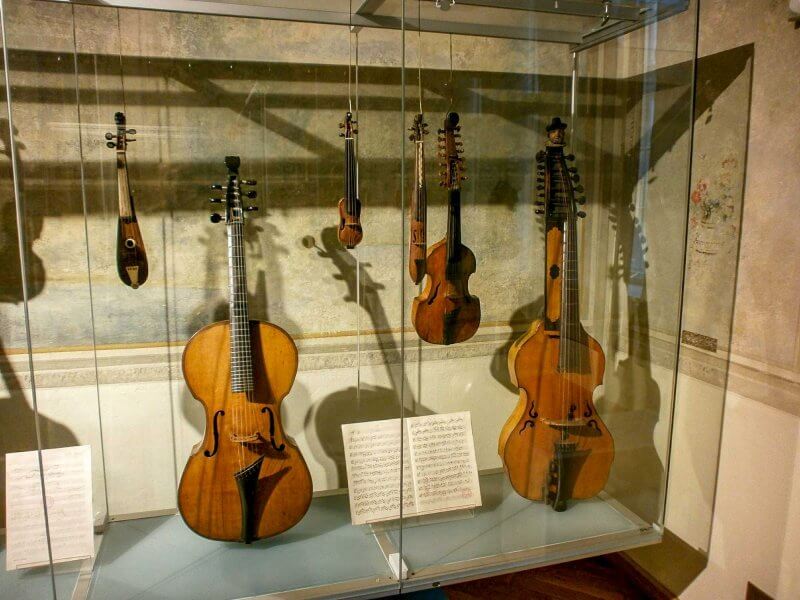 When visiting the Národní muzeum in Prague, you will certainly need information regarding the work of its departments. For your convenience we have presented it in the form of a table.