In the suburb of Ecton, near Canberra is the National Museum of Australia. Its collection includes objects that tell stories of the long history and culture of the indigenous peoples of the continent and the nearby Torres Strait Islands. Most of the treasures date from 1788 to the Olympic Games held in Sydney in 2000. The National Museum of Australia is reputed to hold one of the most valuable and largest collections of drawings on tree bark made by Aboriginal people. There are also ancient Australian tools, the heart of the Far Lap horse that won the prestigious tournament and the structure that would later go on to produce Australia’s first car.

The idea came to fruition

In the early twentieth century, the Australian government began to think about creating a museum, but to translate the idea into reality prevented two bloody world wars, devastation, the global financial crisis. In 1980, when the country was enjoying an unprecedented boom in many industries, the parliament passed a resolution to create a museum and form its collection. So on March 11, 2001 the National Museum of Australia was opened. This event was timed to coincide with the 100-year anniversary of the Australian Federation.

The National Museum of Australia today

Today, the National Museum of Australia is located in the buildings, made in the postmodern style, their area is 6,600 square meters. The museum ensemble is made up of separate buildings that link together to form a semi-circle around the ‘Garden of Australian Dreams’. This whimsical name belongs to a composition of sculptures depicting a map on the water, adorned with trees and grasses. In its center is the most populated part of the continent with road signs, plaques telling the names of Aboriginal tribes, borders, in which certain linguistic dialects are spread.

The facade of the museum building is painted in unusually bright colors: orange, crimson, bronze, gold, black and silver, which makes it noticeable and stands out from the many uniform buildings in the city. Another feature is the phrases written on the walls of the building (Braille was used), which can be read even by blind people. After the inscriptions appeared, the public of the city erupted in outrage and indignation, as some of them were openly provocative: “Excuse us for the genocide,” “God knows,” and so on. The museum leadership found a way out of this situation by covering the phrases with silver signs.

In front of the entrance to the museum you can see an unusual orange sculpture called “Uluru Line”. It is in the shape of a loop stretching over the Ecton Peninsula. Deep meaning lies in the “Uluru Line”, because the loop symbolizes the intertwined destinies of many millions of Australians.

In 2006, the National Museum was officially recognized as the most important attraction in Australia.

The National Museum of Australia expects visitors every day (except December 25) from 09-00 to 17-00 hours. There is no charge for permanent exhibitions, but there are often rotating exhibitions for which you must buy a ticket (cost about A$50). It is strictly forbidden to take photos or videos of the exhibits or the inside of the museum, and you will be fined if you do.

The National Museum of Australia is accessible by city bus. There is a bus line, no 7, on weekdays and no 934 on weekends. If you are part of a tour group, a special bus will take you there. You can also use a bicycle. City roads are equipped with paths for cyclists, and there is a bicycle parking lot next to the museum. There is always a cab at your disposal. Or if you like walking, you can take a leisurely stroll along the city’s quiet streets.

READ
Detailed information about the Museo del Prado in Madrid

Visiting museums is one of the highlights of any visit to another country. Many museums, contrary to popular belief, turn out to be really interesting, and leave a lasting impression. Australia is no exception, and offers visitors a host of interesting and informative walks across the largest of the continent. 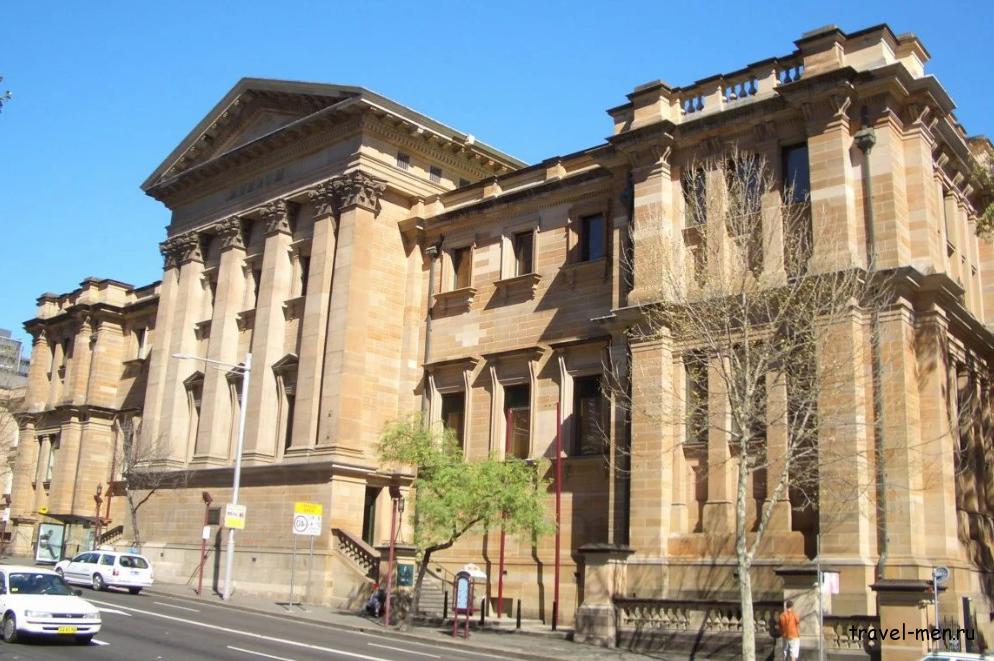 Australia’s oldest museum, the Australian Museum, is a good place to start. The museum is located in Sydney, on a street called College Street. The museum began its work back in 1827, which means it is now over 190 years old.

The scientists working in the museum specialize in the study of anthropology and natural history. Also, lovers of zoology, paleontology and even numismatics will find much of interest here. The exhibition is represented by almost 18 million items.

The museum today is still involved in scientific activities and organizes various public programs. You can visit the Australian Museum any day of the year from 9:30 to 17:00. The only exception to this is Christmas Day. 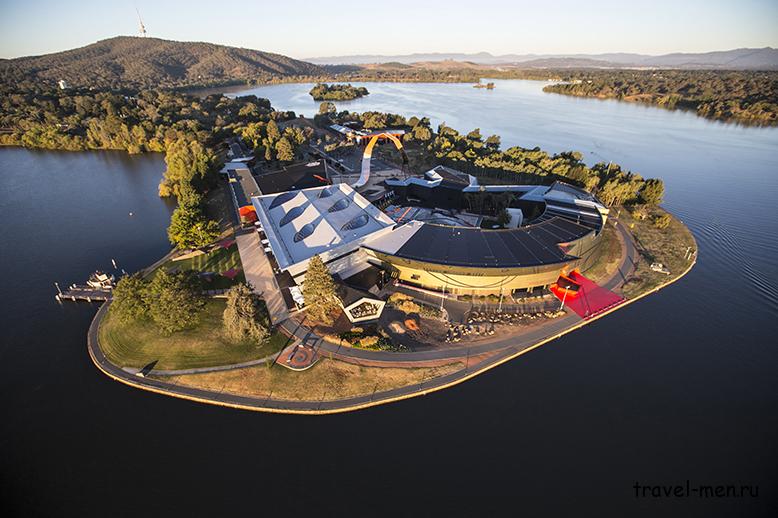 In addition, the museum pays much attention to the interaction between man and nature and the factors that have influenced the social history of the country. 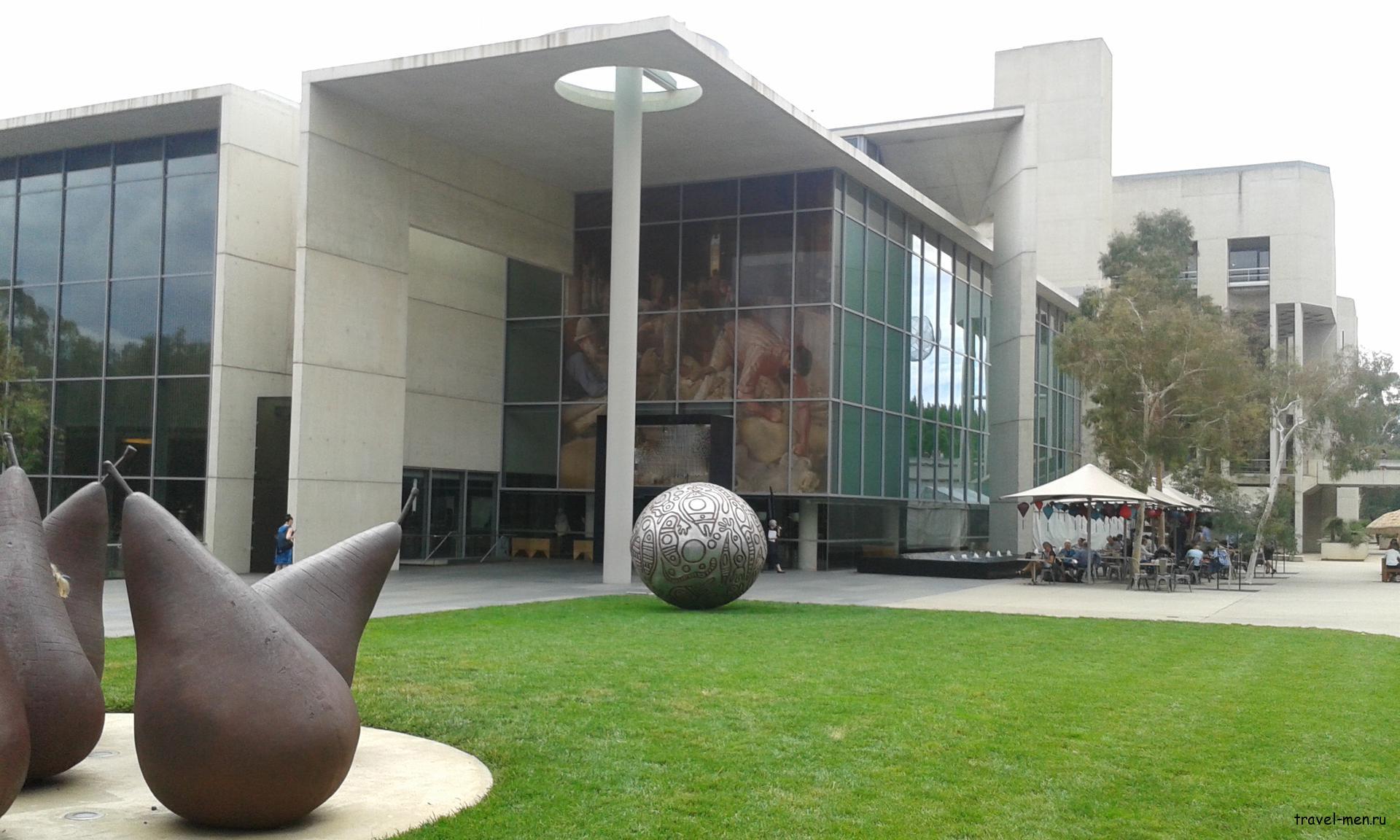 Art lovers won’t want to miss the Canberra’s largest art gallery, which was founded in 1967.

The museum has a huge collection of all kinds of art on display. See Aboriginal art and how art developed as a result of European settlement.

For the painting enthusiast, you’ll also be pleased to see a display of paintings by some of Australia’s leading artists. In addition, the museum offers displays on Asian and European art. There are also paintings by famous artists, including Paul Cézanne, Claude Monet, Andy Warhol and others.

In the museum you can admire not only paintings, but also numerous photographs, sculptures, prints, products made of ceramics, textiles and wood.

The largest art gallery in the country is the National Gallery of Victoria. The gallery is located in Melbourne and is not only the largest but also the oldest, it opened back in 1861.

In this museum you can see the paintings of world famous artists. There are paintings by Claude Monet, Pablo Picasso, Peter Paul Rubens, Paolo Veronese, Rembrandt, and others.

There are also artworks from Ancient Egypt, Ancient Greece and Europe.

In 1986 a painting by the world famous artist Pablo Picasso was stolen from the museum. As the thieves stated, it was done to protest the lack of art funding in the country. Fortunately, the work of art was safely returned to the museum after only a week after the crime. The painting, The Weeping Woman, was in a storage locker at a railroad depot. 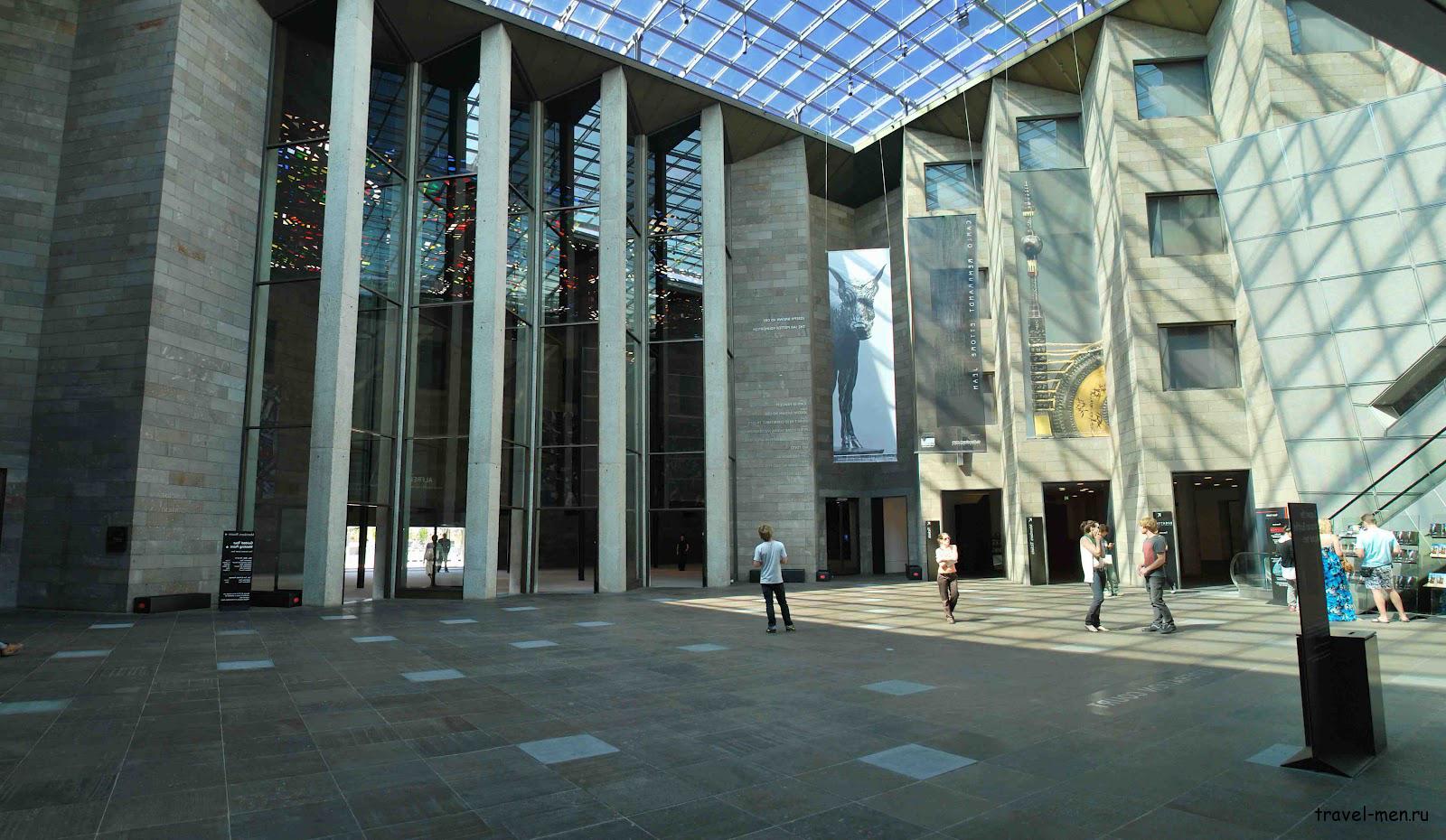 The Melbourne Museum is located in Melbourne, in Carleton Gardens Park, near the Royal Exhibition Centre. The museum consists of seven main galleries, another three-level gallery, and a separate children’s gallery.

Also in the museum you can find several theaters, Discovery Center and an IMAX movie theater. Obviously, the Melbourne Museum is considered one of the largest in the entire Southern Hemisphere.

Located in Melbourne, this museum was founded by Rabbi Lubofsky in 1982. The goal of the founder was to preserve and further develop Jewish culture.

Australian Museum of Fossils and Minerals 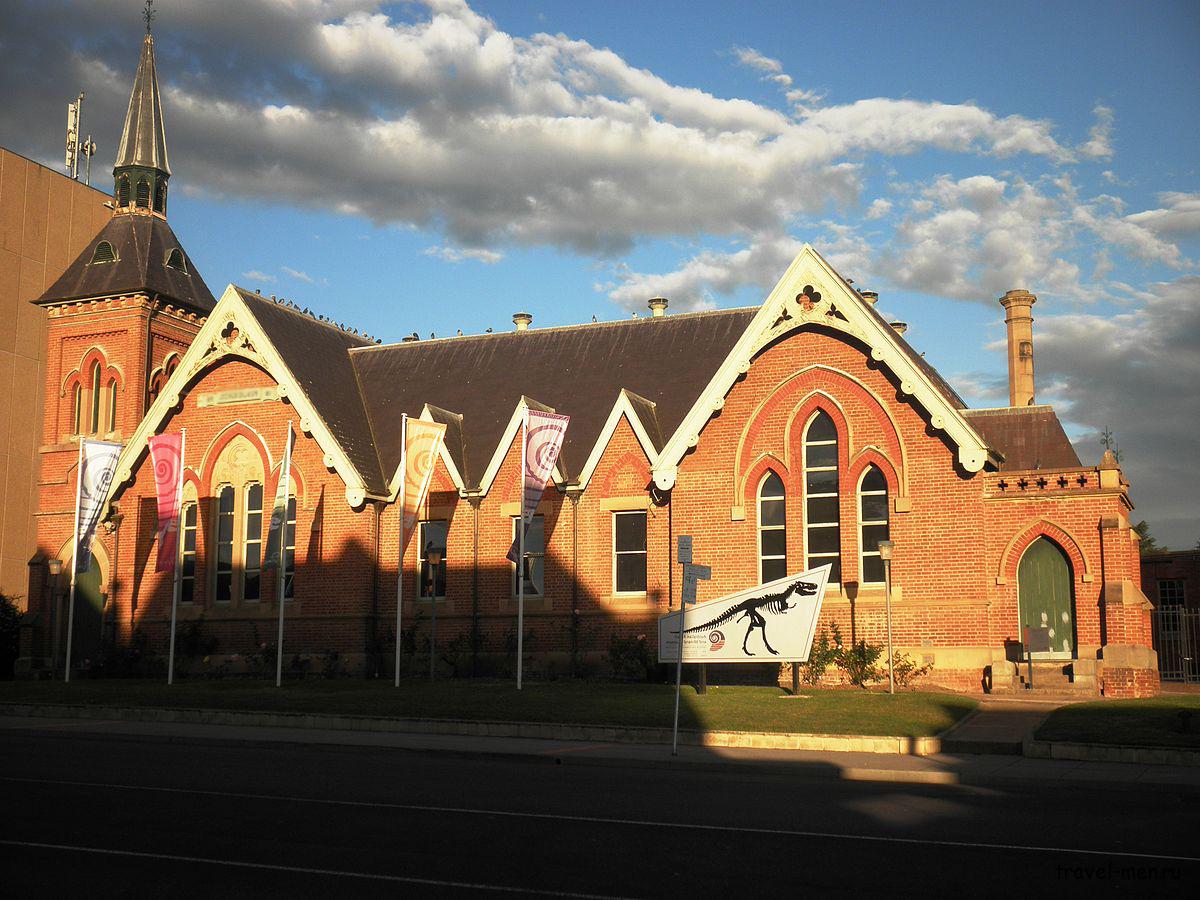 The Australian Museum of Fossils and Minerals is one of the youngest museums as it only opened in 2004. The exhibitions and displays of the museum will undoubtedly be of interest to all lovers of natural sciences.

Here you can see the skeleton of the world-famous Tyrannosaurus Rex, which is a kind of a trademark of the museum. This is the only complete skeleton of Tyrannosaurus in Australia, it is 4 meters high and more than 10 meters long.

You can also see a lot of dinosaur eggs and a huge collection of fossils. The museum also has an impressive display of minerals. 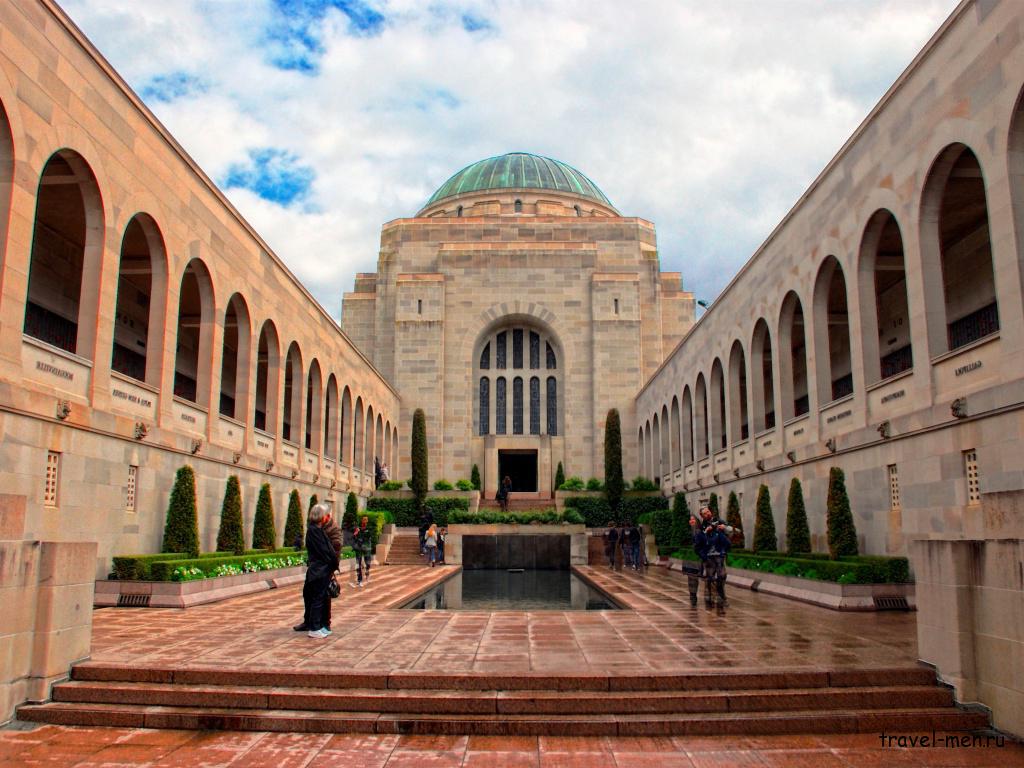 Australian War Memorial in Canberra. The memorial is dedicated to servicemen who died and participated in the wars fought by the Commonwealth of Australia.

Also adjacent to the War Memorial is ANZAC Boulevard, along which are monuments commemorating various military events. At the north end of the boulevard is the Memorial itself, at the center of which is the Hall of Remembrance, which is an octagonal chapel in which you can see the tomb of the Unknown Australian Soldier. In addition, the Memorial building houses exhibits on World War I and World War II, the Sculpture Garden, the Aviation Hall and the Hall of Valor. The museum is visited daily by people, including friends and relatives of those who died. Memorial plaques are studded with red poppies, which traditionally symbolize grief.

Large military equipment can be viewed in the museum. This exhibit includes rare German planes, a Japanese submarine, and various bombers and fighters.

The memorial is open to the public any day of the year from 10 a.m. to 5 p.m. The only day off is Christmas Day.

In the museum you can see many different aircraft that the Australian Air Force used. There are both the oldest models that were in service with the Air Force decades ago, as well as the most modern aircraft. 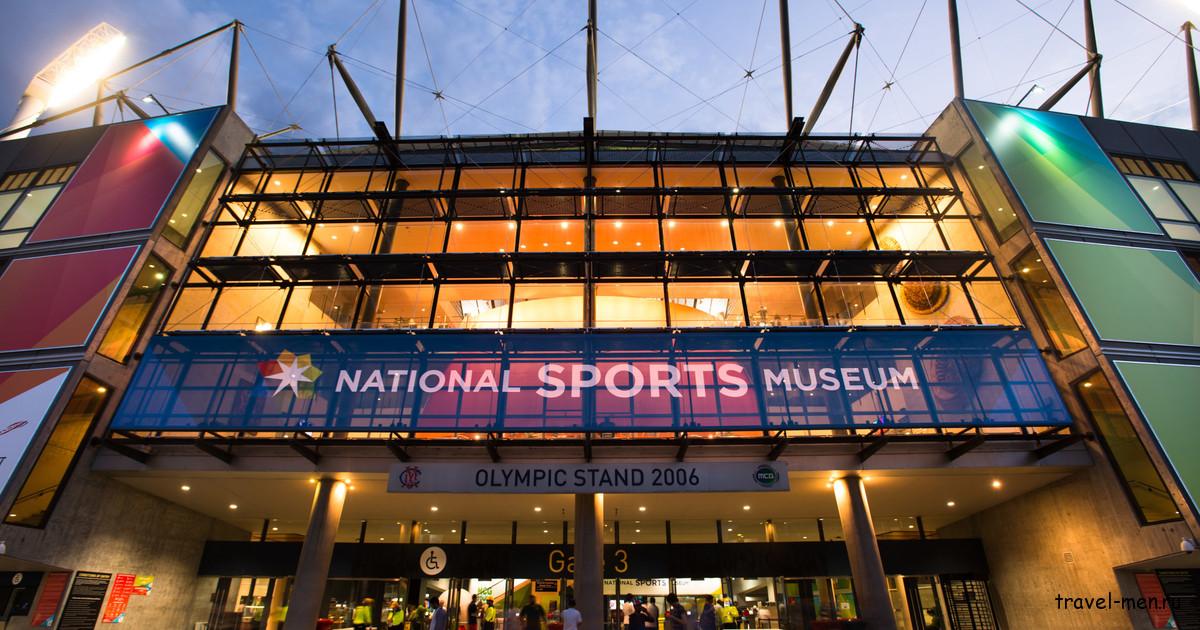 This is one of the largest museums in the world, with an exhibition devoted to the history of sports. The museum was only built in 2008 and is located under the bleachers of a huge cricket stadium. It was here that the Summer Olympics took place in 1956.

The museum has halls devoted to various sports: cricket, Australian soccer, tennis, rugby, basketball and so on. Since 2010, the National Sports Museum includes the Australian Racing Museum.

The museum also features an exhibition on the history of the Melbourne Cricket Club and the Australian Sports Hall of Fame.