Newgrange is a megalithic structure in Ireland, a tomb and complex of Bru-na-Boin, a UNESCO cultural heritage site.

Megaliths are structures made of huge slabs of stone. They are some of the most impressive man-made sights on the planet.

The oldest of these structures is located 40 km from the Irish capital, Dublin.

Giant New Grange dolmen is a part of the mound complex Bru-na-Boin. The age of the structure is estimated at about 5000 years.

New Grange is much older than not only the world-famous megalith at Stonehenge, but also the famous Egyptian pyramids.

This mound in Ireland is about 14 meters high and about 85 meters in diameter.

The weight of some of the plates is up to 40 tons.

A 19-meter corridor leads to a burial chamber, at the base of which stone slabs are mounted vertically.

The internal structure resembles Stonehenge, the main difference – the stone ring of New Grange is covered with an embankment of gravel and earth from above.

Inside the burial chamber is a large ritual bowl.

Many of the slabs are decorated with carvings. Concentric circles, images of cups and zigzag lines are often repeated in the ornamentation. The main element of the pattern is triple spirals, probably symbolizing the cycle of life – death – rebirth.

A stepped vault rises above the burial chamber. The monoliths forming it are selected in such a way that the heaviest stones are located at the bottom. Towards the top their weight gradually decreases.

The megaliths form a hexagonal hollow dome tapered to the top, which is about 6 meters high.

The entrance to the tomb is surrounded by stones 1.5-2 meters high. A circle of 97 giant stone slabs surrounds the mound around the perimeter.

It is hard to imagine how the ancient builders were able to make such precise calculations and perform such a colossal job.

Like the other mounds in the Boyne Valley, New Grange was discovered by accident. For centuries, people had not paid much attention to the rather large hill that rose above the bend of the Boyne River.

In 1699, workers attempted to take rubble for road construction from a nearby hill, which turned out to be a cultic megalith upon further examination. At the time, the find did not arouse much interest.

The first purposeful excavations were not begun until 1962. Professor Michael O’Kelley led the research.

The expedition succeeded in discovering one of New Grange’s most striking features: an unusual light effect, observable only a few days a year.

As it turned out, a small rectangular hole was left over the entrance to the tomb. Through this window in the winter solstice (mid-December), the dawn rays of the sun penetrate into the burial chamber, highlighting the carvings on the walls. This impressive spectacle lasts about a quarter of an hour.

Although the restored New Grange is open to visitors these days, only a lucky few have seen this luminous extravaganza.

Through a special lottery of tens of thousands of applicants, 50 winners are chosen each year to receive the right to see this mystical spectacle.

Newgrange dates back to 2500 BC. It is located 40 km. north of Dublin. It is a national monument of Ireland.

Newgrange is a fairy mound in Ireland.

Newgrange is a megalithic religious structure in Ireland, part of the Bru-na-Boin complex. Newgrange dates from 3200 B.C. It is the oldest religious stone structure of its kind in the world, older than Stonehenge and the pyramids of Giza. Newgrange is located fifty kilometers northwest of the Irish capital, Dublin, in County Meath. 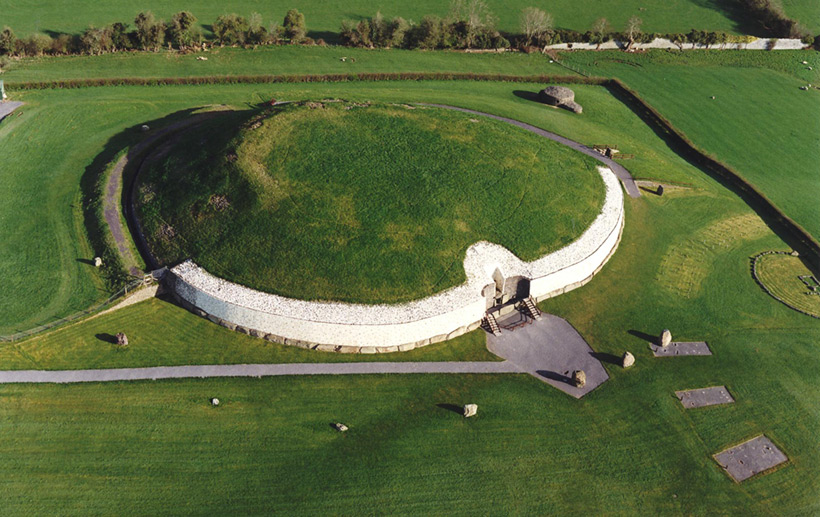 At first glance Newgrange may appear to be no more than an ordinary mound of thirteen and a half meters high and eighty-five meters in diameter. But a closer look reveals that the peat covering the surface of the mound conceals the huge boulders at the base of the structure. There is a monolith near the mound that is decorated with intricate markings carved in stone, but it is only when you get inside that you can appreciate its astonishing scale. 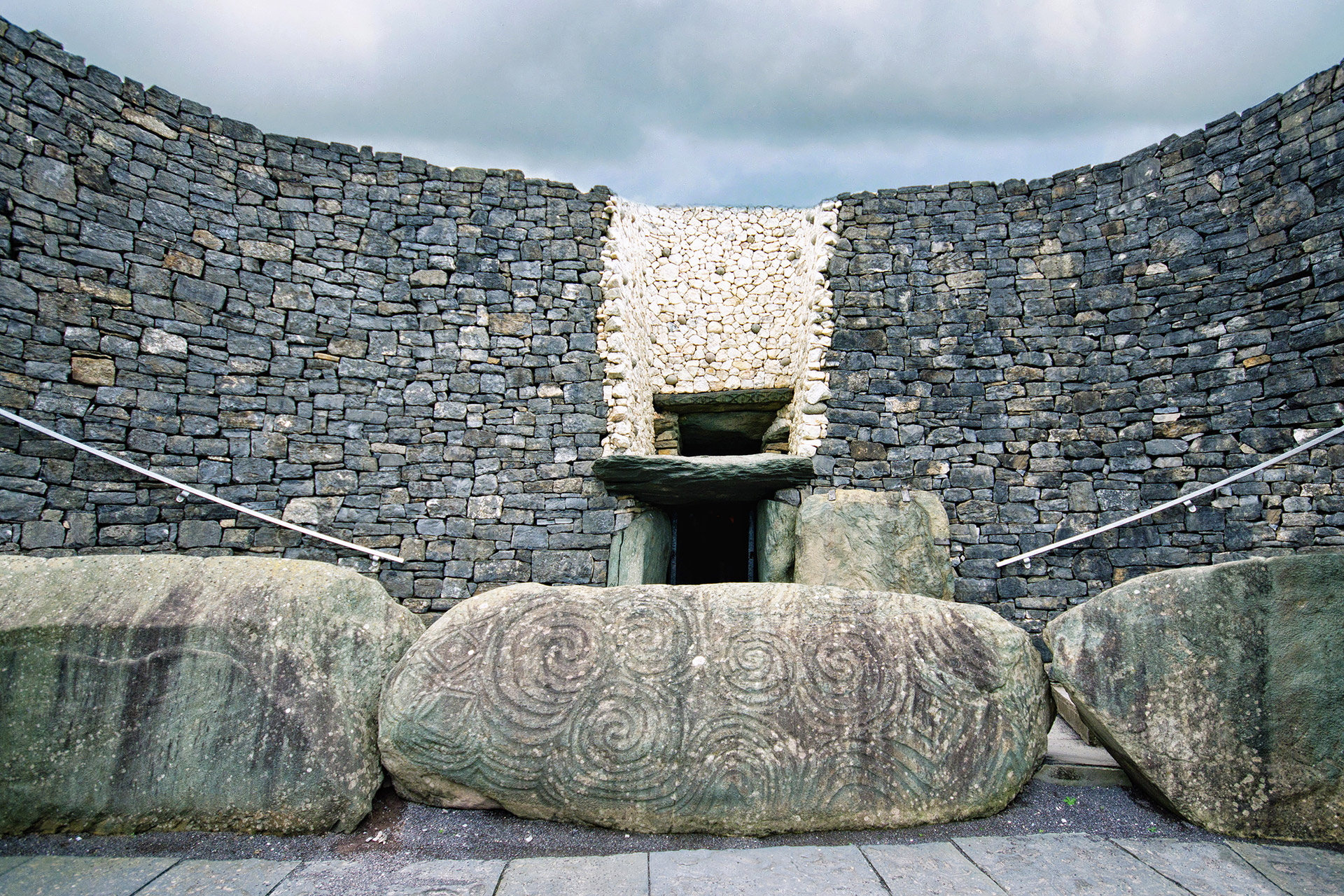 The 19 meter long corridor leads to the burial chamber, which is based on vertically placed stone monoliths weighing from 20 to 40 tons. The structure of the burial chamber resembles Stonehenge, only here the stone ring is covered with an embankment of earth and rubble. Inside the burial chamber a large ritual bowl has been preserved and niches carved in stone have been driven into the walls.

There is a stepped vault above the funeral chamber. The monoliths that form it are arranged in such a way that the heaviest stones are at the bottom and their weight is reduced at the top. The dome is hollow and tapers towards the top in a hexagonal shaft six meters high. 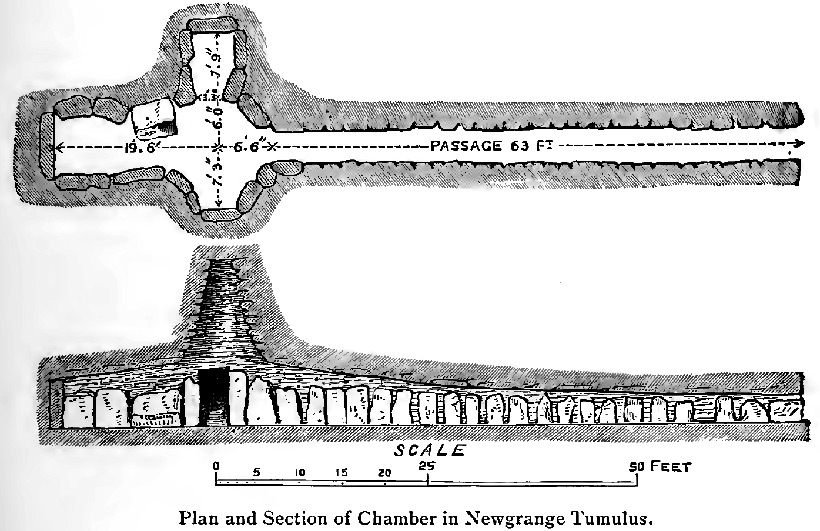 The entrance to Newgrange Tomb was marked by a circle of stones between 1.5 and 2.5 m high. A further circle of 97 upright standing stones encircled the tomb itself. All these stones, as well as the walls of the corridor and the burial chamber, are covered with an ornament consisting of zigzag lines, triangles, concentric circles, but most frequently a triple spiral. This symbol was widespread in Neolithic art and, as researchers suggest, was associated with the cycle of death and rebirth (in particular, similar symbols are carved on carved stone spheres – characteristic artifacts of the same era). Most of the images of the spiral are located at the entrance to the tomb, as if marking the boundary between the world of the dead and the world of the living. The tunnel is oriented to the south-east, exactly where the sun rises on the winter solstice. 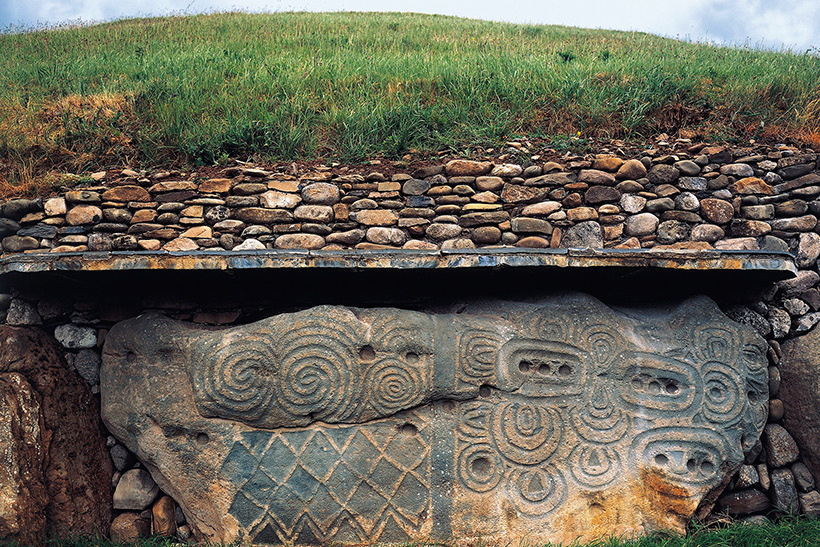 Newgrange is best known for a phenomenon that occurs every year for several days (December 19-23). The entrance to Newgrange’s corridor tomb is a doorway consisting of two upright standing stones and a horizontal lintel. Above it is an opening called the “roof box” or “light box” 20 cm wide. 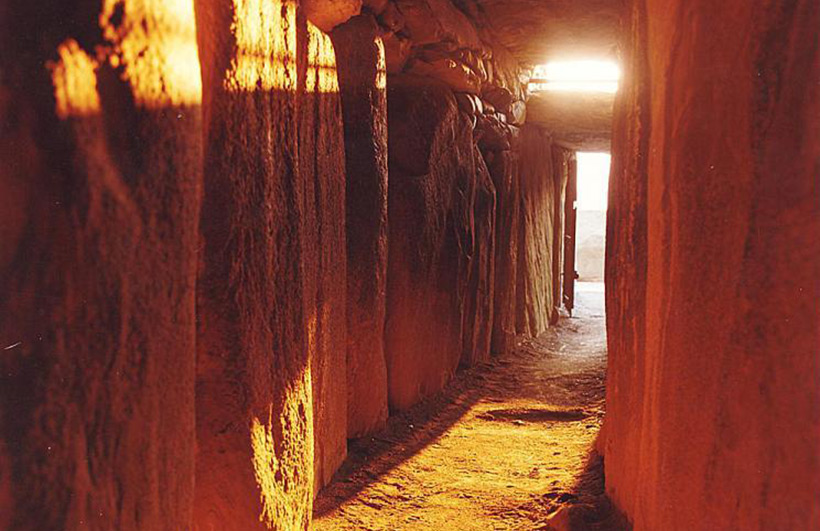 Every year at 9 am (on the winter solstice, the shortest day of the year) the sun begins to move along the Buan River valley. It passes over the hill, which the locals call the Red Mountain (the name probably comes from the color of the rising sun on that day). The sun’s rays, entering the “light box”, penetrate inside, descend down the corridor and illuminate the central chamber on the opposite side of the tomb for about 17 minutes (14 to 21 minutes). 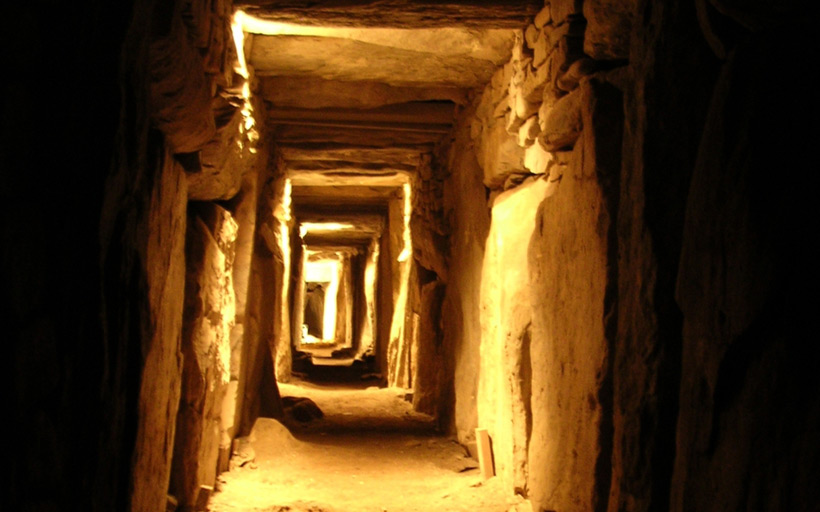 The question of Newgrange’s purpose remains open. Only a few archaeological finds have been uncovered during the excavation of the chambers, but they provide very little information, since for centuries it had been accessible to all (from 1699 until 1962, when O’Kelly discovered the monument). Two burials and at least three cremated bodies were found. All were at the bottom of a large stone basin that apparently held the bones of the dead. Given that much of the material had been moved several times during previous investigations and the fact that all of the human bones collected represented only fragments of bodies, it is extremely difficult today to identify individual burials. More than five people must have been buried in the chamber. 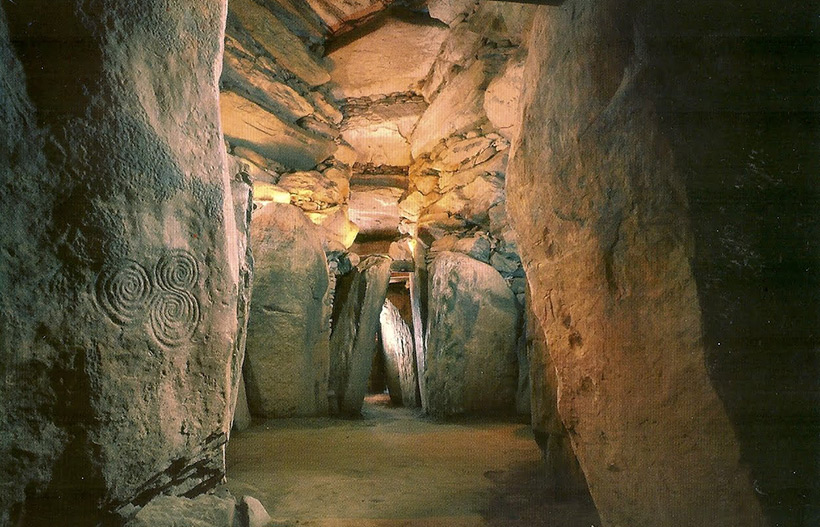 The archaeological finds inside the monument are not particularly impressive: several gold objects, in particular two gold torquesses (a mane ornament worn around the neck, woven from several strands), a gold chain and two rings, as well as a huge phallus-like stone, several pendants and beads, a bone chisel and some bone bolts. Very few pottery was found at Newgrange, which is typical of burials in corridor tombs: it seems that they were intended only for a special kind of activity and a limited number of people.

It must be said that not all researchers consider Newgrange to be a burial ground. An African by birth, Chris O’Callesgen in his book “Newgrange – Temple of Life” (2004) refutes the version that Newgrange was a corridor tomb, because there is no tangible evidence that Newgrange housed human burials. 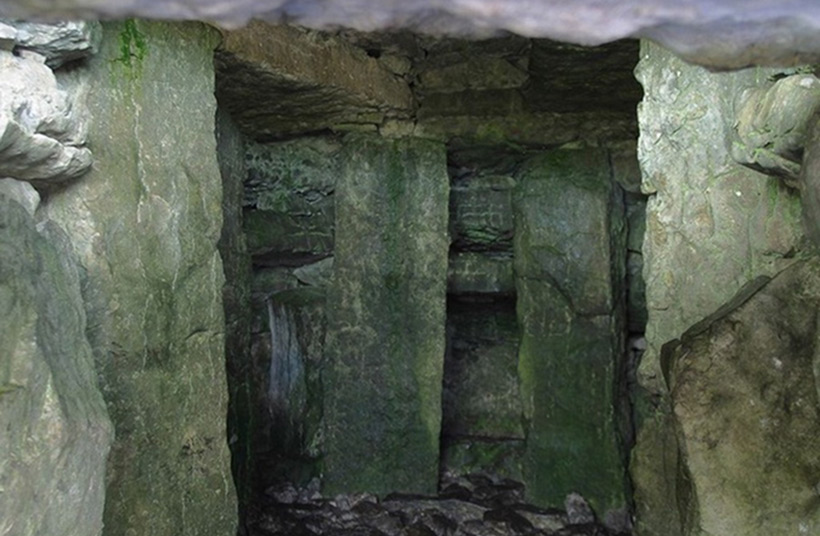 He believes that the bone fragments found during the excavation may have been brought there by animals after Newgrange ceased to function. According to O’Calleghen’s theory, the monument was built to celebrate the union of the sun god and Mother Earth, symbols of life force. The “light box,” or sun window, allowed the sun god to penetrate the corridor of the mound (representing Mother Earth) and reach the chamber (symbolizing the womb) located in the depths.

This theory is supported in part by the design of the monument, associated with the astonishing effect on the winter solstice, and by the phallus-shaped column and chalk balls found in the chamber, which may have symbolized the male genitals. Be that as it may, Newgrange’s role is not limited to one function. As already mentioned, the few human remains found in the mound do not allow all the chambers to be considered as Neolithic burials, since some of the bones may have been removed from the site by carrion-eating animals or people searching for the remains. 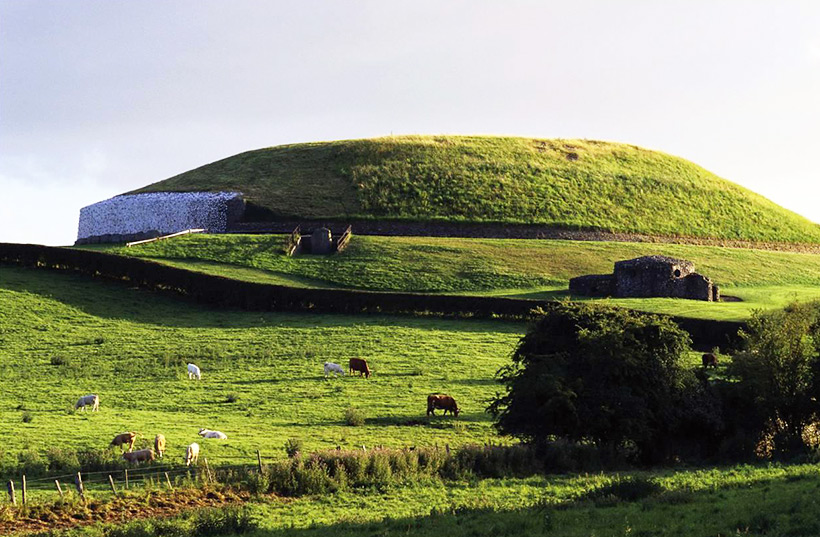 Archaeological evidence suggests that when Newgrange ceased to be a tomb and observatory, sacrifices were indeed made there. All sorts of Roman objects have been found at the site, particularly gold coins, pendants (pendants) and brooches, sometimes minted.

Since the Romans never invaded Irish lands, many of these gifts must have been brought by Romans or Britons of Roman origin, or perhaps by pilgrims who considered this monument, already 3,000 years old at the time, sacred.

Newgrange entered Celtic mythology as the “mound of fairies. The locals believed that every year on the night of November 1, considered by the Celts to be a night “without time”, when one year ends and gives way to another, the fairies come out. 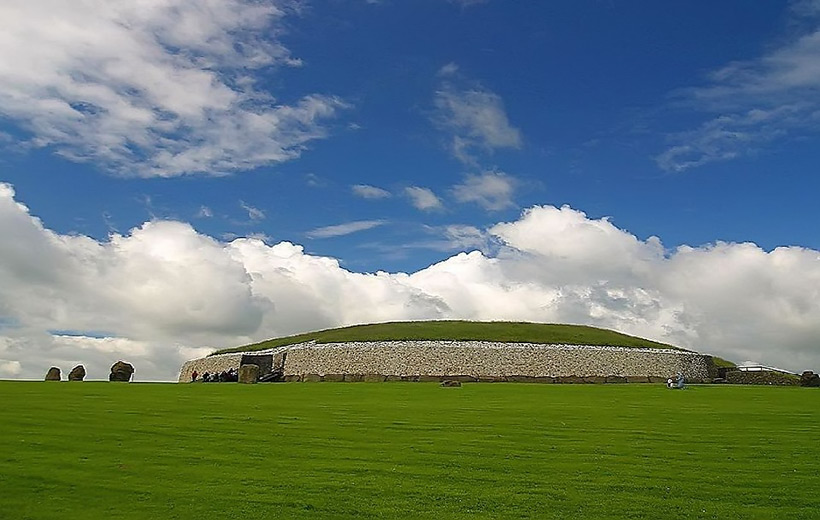 In 1993, UNESCO officially designated the archaeological site of Bru-na-Boin as an international historic site. The World Heritage List describes Newgrange as the largest and most important of the megalithic structures in Europe. Over 200,000 people visit this unique archaeological site annually.

Today Newgrange has been restored and is open to visitors. But only a lucky few – the winners of a special lottery – get to watch the enchanting spectacle of sunlight penetrating the inner room at dawn on the winter solstice. In 2005, for example, 50 people (10 visitors a day) out of 27,000 applicants were chosen.