The Republic of the Niger (fr. Republique du Niger) is a state in West Africa.

The country is dominated by lowlands with an altitude of 300-500 m above sea level. In the north-west, there is the massif of Ayr, a system of plateaux of different heights. The highest point, Mount Bagesan, reaches 1,900 m. The eastern part of the Ayre steeply falls to the vast sandy desert Tenere, an area of about 400 thousand km². The northern part of the country is occupied by high rocky plateaus. In the south of the country there is a plateau, composed of loams, dense lateritic sands, in some places sandstones.

A special natural area of the country forms the valley of the Niger River, which has the most favorable conditions for life, because there is water.

In general, Niger is one of the hottest countries in the world. During the whole year, the midday heat is at least +30 °, the minimum temperature is +8 °.

In Niger grow baobabs, palms (dum and others), and among the grasses the beard grass and elephant grass predominate. In the far southwest, large trees with lush green crowns appear: bombex (cotton tree), mangoes with bright orange fruits, papayas, and palm trees. Bamboos grow along rivers.

The official language is French. Other languages include Hausa and other local dialects.

The literacy rate is about 28%.

Administratively is divided into the capital district of Niamey and 7 departments, which in turn are divided into 33 districts.

Advantages : huge reserves of uranium. In the late 90s, oil and gas deposits were discovered.

When the modern Sahara Desert was a relatively humid climate, the inhabitants of Niger were different from those of today. In the 8th-6th millennium BC, Niger had a Kiffian culture whose members were tall and had a massive build. In the 5th-3rd millennium B.C. it was replaced by the Teneric culture which was graceful in build and belonged to the Mediterranean subrace of the Caucasoid race. The Tenorian culture disappeared without a trace after the drying up of the Sahara; probably, its surviving carriers migrated.

From the 7th century, the valley of the Niger River was part of the principality of Songai. By the end of the 15th century, this principality had consolidated to the status of a kingdom. However, in 1591, the Sultan of Morocco’s army conquered the Sangai Kingdom. Then, in the 18th century, the territory of Niger passed under the rule of the Tuaregs, nomadic tribes, who had inhabited the north of modern Niger since the 7th century.

Europeans arrived in Niger at the beginning of the 19th century.

At the end of the 19th century France began to develop Niger. In 1899 a military expedition was sent from the Niger River to Lake Chad. In 1904 the French established the “military territory of Niger,” as part of the colony of Upper Senegal-Niger, which was in turn part of French West Africa. In 1905-06, Muslim preachers and local sultans tried to offer armed resistance to the French.

Since the 1920s, French colonizers actively cultivated various crops on the territory of Niger, intensively developed infrastructure (primarily the road network), and recruited locals to work in industrial enterprises in other, coastal colonies in French West Africa.

READ
The country of Afghanistan

In 1946, Niger received the status of an overseas territory within the French Union. An elected General Council, the local body of self-government, was established. Most of the seats were held by local tribal chiefs.

Niger: map and information about the state 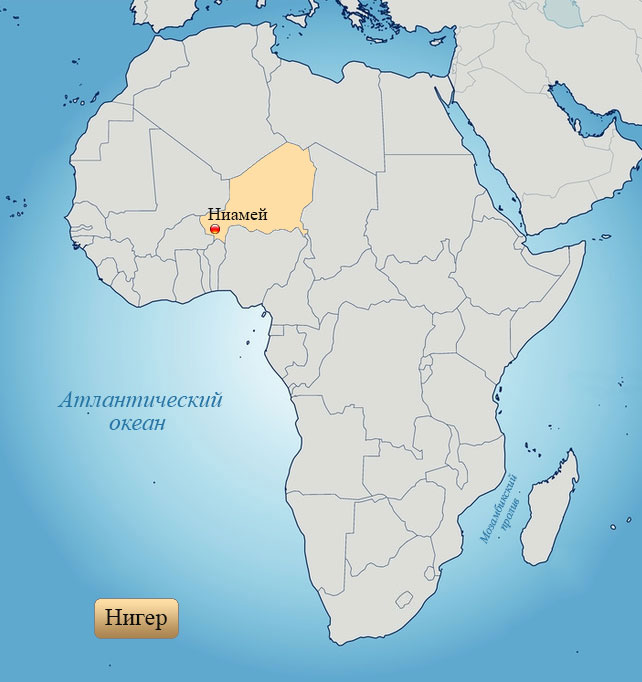 Niger on a map of Africa (all images are clickable)

Niger is a state in West Africa. It borders on Algeria, Libya, Chad, Nigeria, Benin, and Burkina Faso; it is landlocked. Most of its territory is plains, while its northern areas are occupied by high rocky plateaux of the Sahara Desert. Niger is the largest country in the region, with an area of about 1.3 million km².

Its climate is tropical. Rainfall is almost non-existent throughout most of the country, with small amounts falling only in the south-westernmost regions, but even here the annual rainfall is less than 100 mm, and only in the border regions with Benin and Burkina Faso, where the climate changes to subequatorial, does it fall to 800 mm of rainfall per year. The climate of Niger is characterized by sharp diurnal temperature fluctuations: the average temperature during the day is +30-40 °С, and at night, especially in the desert, frosts are possible.

The flora of Niger is represented by vegetation of the semi-desert type. Date palms are common in the oases.

Among the animals found in the Saharan sands, the only animals that can be found are the jerboas, sand foxes and antelope. Giraffes, elephants, antelopes and warthogs are found in the southern areas. 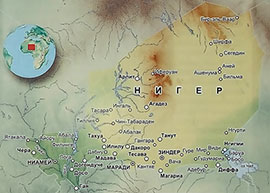 But the state system of Niger is a presidential republic. The legislative body is parliament. Territorially the country is divided into 8 departments and the capital district. The local currency is the CFA franc. The capital is the city of Niamey.

Population is about 18 million people. Most of them are representatives of various peoples of linguistic groups of the Nigger-Congo and Songai, as well as the Tuareg Berber tribes living in the northern part of the country. French is the official language, while Songhai, Bantu and other languages are used in everyday communication. Up to 80% of believers are Muslims, while the rest retain their adherence to ancient traditional beliefs.

At present the country regularly experiences uprisings of Tuareg tribes and armed conflicts between government troops and residents of the northern areas. Therefore, although there are no restrictions on movement, it may not be safe to visit these areas.

The city of Zinder is known for its unusual architecture, there are many monuments of Muslim culture, such as mosques. Not bad, in comparison with other cities, infrastructure is developed. In the oldest quarter of Birni are square houses with geometric designs and paintings on the walls. There is a quarter Zengu, inhabited mainly by the Hausa tribe, and the New Town, which is the economic center of Zinder.