The construction of the Nijo Castle began in 1603 as a residence in Kyoto for Tokugawa Ieyasu, the first Shogun (as they called the ruler of Japan) of the Edo period. Twenty-three years later his grandson Iemitsu completed the construction work. The palace complex was greatly expanded. A five-story fortress was added to it. The castle has two lines of defense with water moats and walls.

After the fall of the Tokugawa shogunate in 1867, Nijo Castle was used as an imperial palace for a while. A little later it was donated to the city and opened to tourists as a historical monument.

Its palatial buildings are probably the best examples of castle palace architecture of the feudal era in Japan. Since 1994, Nijo has been on the UNESCO World Heritage List.

The main areas of Nijo Castle

The entire palace complex is commonly divided into 3 sections: Honmaru (as the main defensive circle was called), Ninomaru (this is the second defensive circle) and the gardens that surround them.

Through an imposing and beautiful gate from the east you can enter the territory of Nijo Castle. 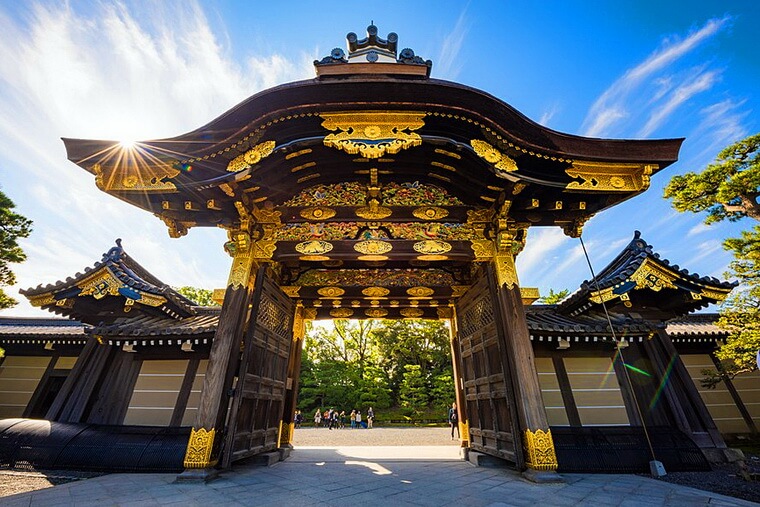 Audioguides, by the way, can be rented right outside the gate.

Going further into the castle, you will get to the Karamon Gate. It is made in the Chinese style and is the main entrance to Ninomaru (the second circle of defense). Here is the main attraction of the castle, Ninomaru Palace. It served as the residence of the Shogun during his trips to Kyoto. 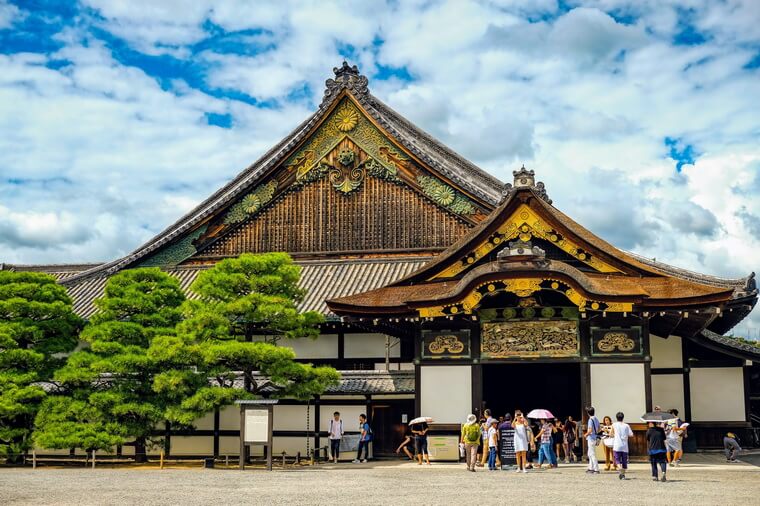 It must be said that the palace has been preserved almost in its original form. It consists of several separate buildings. It is noteworthy that they are connected with each other by passages with so-called “nightingale floors. This interesting name comes from the fact that the floors there creak when stepped on. This is done as a security measure against intruders. The floors of the palace rooms are covered with tatami, have elegantly decorated ceilings and beautiful sliding doors (fusuma).

A tour route takes you through several halls and auditoriums.

Only visitors with the highest rank could enter the main hall, where the Shogun sat surrounded by bodyguards hidden in closets. Visitors of lower rank were only allowed into the adjoining rooms and were not allowed even to look at the shogun. The inner rooms of the castle consisted of offices and living quarters. The living rooms were for the Shogun and his attendants only.

Note that to view the interior of Ninomaru Palace, you would have to pay a separate fee. Around the palace stretches the Ninomaru Garden. It is a classic Japanese garden with original landscaping, a pond, decorative stones, and majestic pine trees. 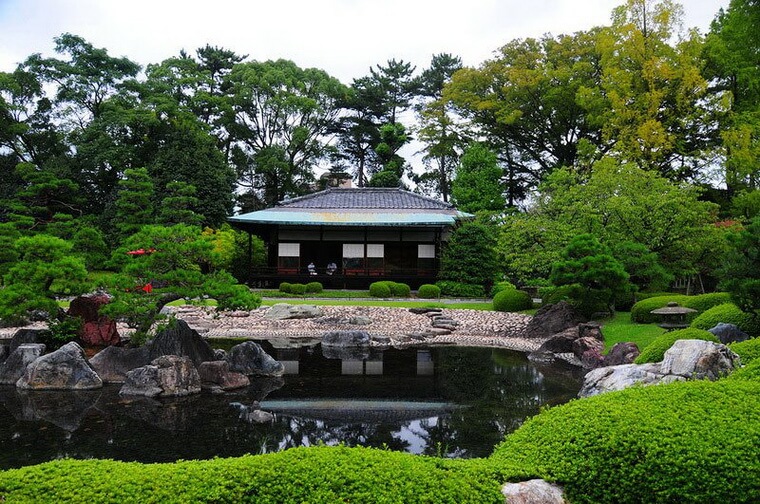 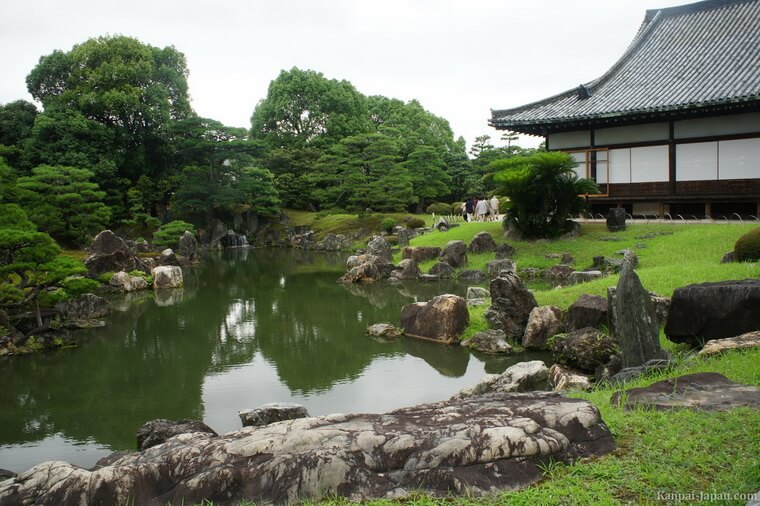 This is the main defense circle. It was the site for a second complex of buildings and a five-story fortress tower. However, both the tower and Honmaru Palace were destroyed by fire in the 18th century. They were never rebuilt.

After the fall of the shoguns’ power, the residence of the emperor was moved to Honmaru from Katsura. And to this day it remains here.

And while you can visit Ninomaru Palace, Honmaru Palace is closed to tourists. Although there are occasional special open-air events. Visitors can stroll through the gardens and climb the stone foundations of the former fortress, which offer an excellent view of the historic complex. 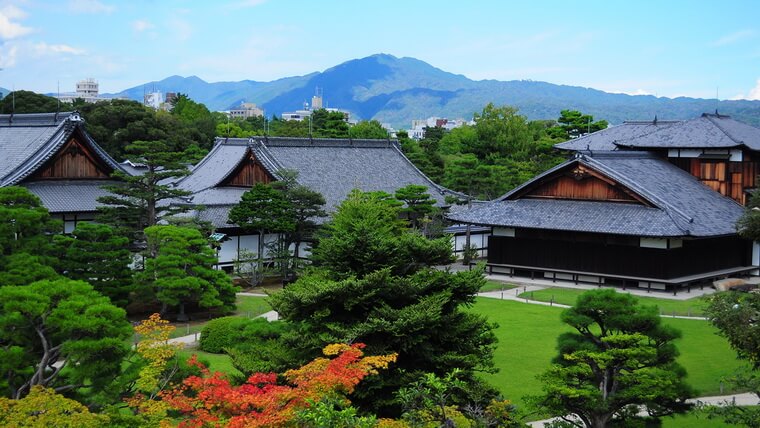 The Gardens of Nijo Castle

Honmaru and Ninomaru are surrounded by green gardens with well-kept trees and walking paths. Cherry trees (or Sakura trees, as they are called in Japan) of numerous varieties are planted in the castle gardens. This includes more than 400 trees of later varieties. Because of this abundance of varieties, cherry blossoms here usually run from March to late April.

If you want to see another floral attraction in Japan, go to the famous Kawachi Fuji Gardens on Kyushu Island.

In addition, there is an orchard with plums. It blooms in early March. Another garden worth mentioning is the Seiryuen Garden. It’s half Japanese and half Western-style garden. It was founded in 1965 for cultural events such as tea ceremonies. You’ll see maples, ginkgo trees, and many other trees in many areas here. They have vibrant colors, and in the midst of fall are sure to amaze you with a riot of color. In autumn, the gardens of Nijo Castle offer a variety of colors.

Nijo Castle is a short walk from Nijo-mae Station along the Tozai subway line.

From Kyoto Station, take the Karasuma subway line to Karasuma-Oike Station. Then you need the Tozai line to Nijo-mae station. The whole trip takes about 15 minutes and costs 260 yen. Alternatively, you can get to the castle from Kyoto Station by city bus No 9, 50 or 101 (15-20 minutes, 230 yen one way) or from Shijo-Kawaramachi by city bus No 12 (15 minutes, 230 yen one way).

For more information, visit the official website of Nijo Castle. 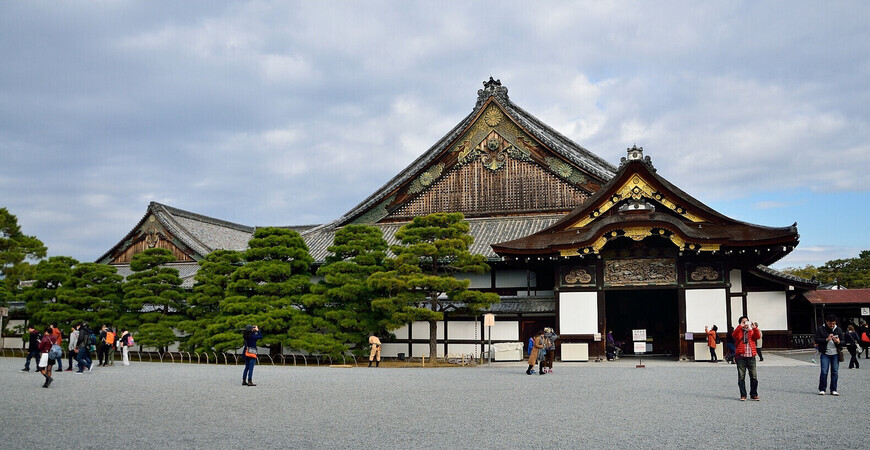 Nijo Castle is a plain castle complex located in the Nakage district, Kyoto, Japan. It is a former residence of the rulers of Japan – the Tokugawa Shogun family. The castle consists of the ruins of Honmaru Palace, Ninomaru Palace, several gardens, and various auxiliary buildings. Around the overall center are two massive rings of fortifications, each consisting of a wide moat with water and a high wall.

The total area of the buildings exceeds 8,000 square meters and the entire complex covers more than 275,000 square meters. It is one of the seventeen historic monuments of ancient Kyoto that have been included in the UNESCO World Cultural Heritage list. It is also part of the National Treasures of Japan.

The castle was laid in 1601 by order of the first Shogun of the Tokugawa clan, Ieyasu Tokugawa, Prince Minamoto. Construction work was completed in 1626, during the reign of the third Tokugawa dynasty Shogun, Iemitsu. At the same time some parts of another Japanese castle, Fushimi, were moved to its territory. In 1750, a lightning strike caused the main tower of the castle to burn to the ground. The fires that occurred in 1788 and 1791 almost completely destroyed some of the ancient palaces and castle buildings, built mainly of wood.

For many years the castle was the Kyoto residence of the Tokugawa shoguns. After the end of the Tokugawa shogunate’s reign, which lasted until 1868, the castle was given to the imperial family and received its new name, Nijo Palace. In 1884 the castle complex acquired the status of an imperial villa. The last Emperor of Japan, Shōwa, decided to donate it to the city of Kyoto in 1939. A year after this event, the palace complex was turned into a public museum and opened to the public.

The area of Ninomaru Palace exceeds 3,300 square meters. It consists of five interconnected separate buildings and is built almost entirely of tupac or hinoki cypress. The decoration of the palace consists of large quantities of gold leaf and elaborate wood carvings, it was designed to impress visitors with the power and wealth of the Shoguns. The sliding doors, ceilings, and walls of each of the 33 luxurious rooms are decorated with exquisite decorative paintings by famous artists of the Kanu school. To preserve the unique paintings, it is forbidden to take pictures or open windows in the palace.

The floors of the palace are covered with over 800 tatami. The entire interior is a prime example of the classic Japanese style. The rooms have three walls each, connecting in a single space to the corridor. The palace also has three large halls, one of which was intended for official meetings of the emperor with the Japanese feudal nobility. It was on the grounds of Ninomaru that the Meiji Emperor took power from the last Shogun of the family, Yoshinobu Tokugawa, which occurred in 1867.

One of the most striking features of Ninomaru Palace are the “nightingale floors” (uguisubari) in the corridors, which emit a characteristic creak that resembles the chirping of birds. This design of the floors prevented unwanted guests from entering the palace. The rooms were also equipped with virtually invisible paper walls behind which the rulers’ guards hid. The design of the walls and secret doors allowed the rulers to quickly leave the palace in case of danger.

The area of the palace is about 1600 square meters. The complex consists of four parts: living quarters, reception rooms, entertainment rooms, hallways, and the kitchen area. The different areas are connected with each other by corridors and courtyards. The architectural style corresponds to the late Edo period. The palace features paintings by several famous masters such as Kanu Eigaku. Honmaru Palace was originally similar to Ninomaru Palace. However, the original structures were replaced between 1893 and 1894, by moving parts of the former Katsura Palace within the Kyoto Imperial Building. The changes took place after the Imperial Court moved to Tokyo.

There are several beautiful gardens, groves of cherry trees and Japanese plum trees on the castle grounds. The Ninomaru Garden was designed by landscape architect Kobori Enshu. It is located between the two main rings of fortifications, next to the palace of the same name. There is a large pond with three islands and many picturesquely arranged stones and topiaries in the garden.

The Seiryu-en Garden was laid out in 1965, located at the northern end of the complex. Official receptions for visitors to Kyoto and cultural events for citizens, including tea ceremonies, are held here. The eastern part is a western-style garden covered with lawn, while the western part is a Japanese chisen-kaiyu (walking pond) with two tea houses. The seiryu-en garden is decorated with more than 1,000 carefully laid out stones.

It was built to preserve and display the original mural and other paintings of Ninomaru Palace. Its construction began in 2003, in honor of the 400th anniversary of Nijo Castle, and was completed in October 2005 when the gallery opened to the public. The gallery’s exhibits are marked by the Japanese government as important cultural assets of the country.

The paintings are located on movable panels that are removed from storage and displayed in the gallery’s glass showcases as part of quarterly exhibitions. During the exhibitions, they are arranged in the same order they were originally in the rooms of the palace. In the hallway of the gallery are samples of decorative interior decoration of the castle and some artifacts from the castle complex discovered during excavations.

Admission tickets can also be purchased at the castle gate, at the Main Information Center. Or at the Painting Gallery, but here they only sell tickets to the gallery itself. Those who have purchased an e-ticket can enter the Nijo Castle directly, using a QR code.

Take city buses 9, 12, 50, 101, and 111 to the “Nijojo-mae” stop near the castle complex. Day passes for the Kyoto subway or other public transportation in Kyoto allow you to buy an entrance ticket to Nijo Castle for ¥100 less than the regular price and the discount is valid on the day of the trip.

In Kyoto you can use mobile apps from Uber or JapanTaxi. But it is cheaper and easier to catch a cab on the street. To do this, just raise your hand up and a free car will soon stop. You can safely pay by the meter, in Japan cab drivers generally do not cheat customers.