Nikolo-Naberezhnaya Church is an ancient Orthodox church, located on a high terrace of the left bank of the Oka, in the ancient town of Murom. The church was consecrated in honor of Nicholas the Wonderworker – the savior of drowning, the patron saint of fishermen, sailors and all travelers, and by the ancient Russian tradition was built near the water. Residents of the city call it the Temple of Nikola the Wet. In spring, the Oka floods and fills the entire wide floodplain, the water comes up to the temple itself, so the people of Murom say, “Nikola’s feet are wet.”

Save on your trip!

Nikolo-Naberezhnaya Church was erected in the early 18th century and was an active church until the 1930s, when an active antireligious campaign began in the country. In the middle of the last century the poultry farm was organized in the church, and then the old buildings were given to the Murom museum. Museum workers wanted to arrange inside a permanent exhibition, telling about the river Oka, as well as an exhibition of carved wooden sculptures. However, for a long time the church was empty.

In 1991, it was returned to the faithful. Gradually the Nicholo-Naberezhnaya church was restored, consecrated and the relics of an Orthodox saint – Iuliana Lazarevskaya (1530-1604) were transferred here, which became the main sanctuary of the temple. Interestingly, it was in this church that the baptism of the inventor of television, Nikolai Kozmich Zvorykin (1889-1982), took place.

A picturesque panorama of the river valley and a beautiful view of the right bank of the Oka opens from the church. Below, next to the church beats Nicholas spring, the water from which Murom people believe to be healing. It tastes strongly of iron.

There is a swimming pool and a neat wooden chapel near the spring, which is consecrated in honor of the revered icon of the Mother of God “Life-bearing Spring”. Pilgrims and tourists go down the metal stairs from the temple to the spring and chapel.

READ
Stavka of Gull, a frame church in Norway

History of the Nicolo-Naberezhnaya Church

Before the famous campaign to Kazan Kingdom, Tsar Ivan IV the Terrible stayed in Murom and lived at the sovereign’s court. According to legend, it was at the will of the tsar that the first wooden Nicolo-Naberezhnaya church appeared near the palace. It had two side-altars consecrated in honor of Saints Cosmas and Damian and Theodore Stratilat.

Gradually Merezhskaya Sloboda grew up around the temple, where fishermen who supplied fish for the tsar’s table lived. Since the church on the bank of the Oka was considered “sovereign’s”, the ruling tsars of Russia showered it with various graces. Thanks to the decree of Mikhail Fedorovich, the church got rich fishing and bortniki land on the Oka.

The fate of the first temple is not exactly known. Maybe it burned down in a fire, or maybe it just got dilapidated with time. In 1700 in Murom started building a new stone Nicolo-Naberezhnaya church. The construction was initiated by a Moscow priest Dmitry Khristoforov, who wanted to preserve the memory of his father, Archpriest Khristoforov, who had served in the old Murom church.

At the beginning of the 18th century Russia was involved in a difficult Northern War. It took so much money to equip the army that Peter the Great forbade stone construction throughout the country. An exception was made only for St. Petersburg, so the construction of a stone church in Murom was an out-of-the-ordinary event.

In 1714, in the still unfinished church put a new carved wooden iconostasis with images painted by a well-known Murom iconographer Alexander Ivanovich Kazantsev. A year later, the iconostasis was gilded, and two years later the new church was consecrated with the participation of the Metropolitan of Ryazan, His Eminence Stefan.

At the beginning of the XIX century attached to the church a refectory with a chapel, consecrated in honor of the Descent of the Holy Spirit, and in the middle of the XIX century in the church there was another chapel, dedicated to the patron saint of animals, the martyr Blasius of Sebastia. Curiously, it was built with money of the Murom merchants Suzdaltsev-Ushakovs, who made their fortune in the cattle trade.

READ
Church of the Sign in Dubrovitsy, photo and description

Before it was closed, an icon of St. Nicholas, painted in the XIV century, was kept in the Nicholo-Naberezhnaya Church. Today, you can see this ancient image in the Murom City Museum.

The parish of Nicholo-Naberezhnaya Church never had enough money for large-scale reconstruction, so the Murom temple has been preserved to this day almost in pristine condition. In its architecture one can see clear features of Moscow baroque. The church is distinguished by simple clear lines, proportionality of all parts, and laconic decor.

The white and yellow facades and the sun-colored domes are beautifully visible from the Oka River and from the Oka City Garden. From the southeast of the temple stand a boundary post and a bowed cross in memory of the first defenders of the city and all the soldiers who died on the borders of ancient Russia.

The old carved iconostasis was in Nicholo-Naberezhnaya Church until the 1960s, but during the last restoration the church was placed a new iconostasis. Today the church interiors look very solemn, and the reliquary with the relics of Iuliana Lazarevskaya is especially beautifully decorated.

Nikolo-Naberezhnaya Church is located on the left bank of the Oka in Murom, on Plekhanova Street, 27, 4 km from the railway station. You can get to the temple by cab or walk from Moskovskaya street, from the side of the Murom bus station. 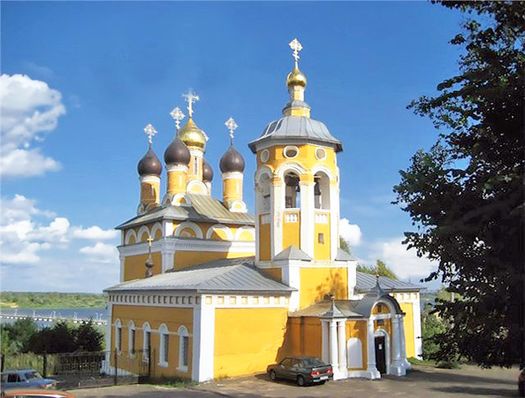 Nicholas and Naberezhnaya Church (or St. Nicholas Church) is an Orthodox church of Murom Diocese of the Russian Orthodox Church, located in the town of Murom, Vladimir region. The church is located on the high bank of the Oka River. At the bottom of the mountain beats St. Nicholas spring, which, according to legend, several times appeared to Nicholas the Wonderworker himself. Nearby in the ravine there is a chapel in honor of the icon of the Mother of God “Life-bearing spring”.

READ
The Church of Our Lady of Tikhvin in Suschev

The church was first mentioned in the sources of the second half of the XVI century: “In Murom in the suburb outside the city of the sovereign, Tsar and Grand Duke yard against Nikola the Wet…”. In the XVI century the church had two side-altars: martyr Theodore Stratilat and Saints Cosmas and Damian. Nearby stood a wooden church of Venerable Zosima and Savvatiy of Solovki. A reference to the Church of Nicolo-Naberezhnaya is also mentioned in the Census book of Murom of 1636/1837, where the church is called a “state structure”.

In 1700, construction of a stone St. Nicholas church began. It was erected by a Moscow priest Dmitry Khristoforov in memory of his father – the priest of St. Nicholas Church Archpriest Khristofor. In 1707, a blessed building charter was received, and in 1714, the iconostasis was placed in the newly built church. In 1717, for the Church of Nicola the Naberezhny, the famous icon painter from Murom, Alexander Kazantsev, painted images of the twelve Sibyls – prophetesses, who supposedly predicted the birth of Jesus Christ. In 1717 the temple was consecrated.

In 1803 a refectory with the side-chapel of the Descent of the Holy Spirit was added to the temple. In 1847, a new chapel was added in honor of St. Blaise, the patron saint of animals, since merchants Suzdaltsev-Ushakovs, who traded in cattle, were among the church founders.

In 1991, the church was transferred to the Vladimir-Suzdal Eparchy of the Russian Orthodox Church to resume its liturgical life. On July 9, 1993, the relics of St. Righteous Juliana of Lazarev were transferred into the church and became the main sacred thing of the temple.

Before the revolution, the church held an icon of the XIV century, which was considered miraculous in the city – an image of Nicholas the Wonderworker. Now it belongs to the Murom museum. 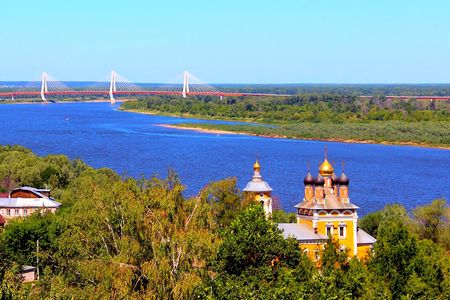 St. Nicholas Church is an example of a local interpretation of the “Moscow Baroque”. This trend is reflected first of all in the decoration of the church, while the type of five-domed building is quite traditional. Only the ending of the bell tower is unusual: not hipped, but domed and with round windows.

The church has never been rebuilt due to the poverty of the parish. The carved iconostasis of the church has been preserved in its original form until 1960s.

Feast days of the church [ edit ]

There is no information about the schedule of services. You can help to fill in the subsection.