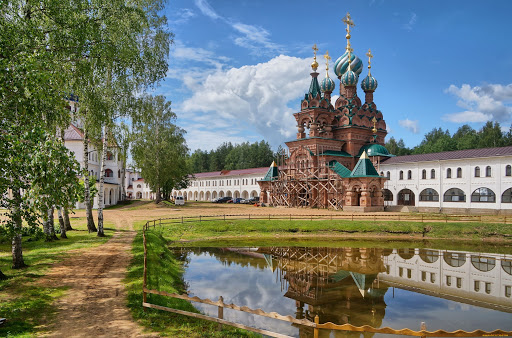 Nikolo-Solbinsky monastery – a female (before 1904 – male) monastery in Yaroslavl Diocese of the Russian Orthodox Church. Located on the River Solba in the village of Solba Nagorievski rural settlement Pereslavl district of Yaroslavl region, 95 km from Sergiev Posad. At the monastery operates a hotel.

The Nikolo-Solbinsky women’s monastery is situated on the bank of the winding, quiet Solba River, on the highway connecting Trinity-Sergius Lavra, Pereslavl-Zalessky and Uglich.

The time of foundation of the original men’s Nikolaev hermitage goes back to the XV century. It received its name from the main holy place of the monastery – the miracle-working icon of St. Nicolas that miraculously appeared in this place and was carefully preserved till the XX century as well as from the desert location.

It is known from ancient scribe books, that already by the mid-16th century the hermitage possessed large tracts of land, and in the monastery itself the wooden church in honour of St. Nicholas with a side-altar of St. Barbara had been functioning. Peaceful existence of not numerous brethren, however, able to provide themselves with all necessary needs, lasted till the beginning of 17th century, till the time of Troubles. During the interregnum, the monastery was completely devastated by Poles and robbers. For about 100 years, the Solbinsk monastery was in desolation, and all of its lands were given as a tribute.

In 1711, by the intercession of Varlaam, the Archimandrite of Danilov Monastery, with the permission of Peter I, the monastery began to be restored. By efforts of Archimandrite Varlaam the new, now stone, church in honour of the Dormition of the Mother of God with warm aisles of the Beheading of John the Baptist and the Shroud of the Most Holy Mother of God was built. But only by the mid 17th century, at the request of the brethren by a decree of the Most-Holy Synod, the hermitage, which was formerly given to the monastery for tribute, gained independence.

In 1840 the monastery was surrounded by a stone fence with 8 towers.

On the territory of the monastery there was a holy well in honour of St. Nicholas of great healing power, so that the brethren were allowed to take its holy water only on Twelve Great Feasts.

In the monastery was upheld a strict charter. In spite of the small number of inhabitants, two liturgies were served daily, there were handmade agricultural works in the fields, cattle yard and 2 mills.

History has not preserved the reasons for the decline of the monastery. By the beginning of XX century, the monastery was without a prior for a long time. Chronicles say that few brethren were not able to manage and maintain the monastery, so in 1903, was adopted by the Holy Synod radical measure to rename the Nikolo-Solbinsk Hermitage from male to female.

That same year some sisters arrived at the monastery with the newly appointed Abbess Makaria from the Pereslavl Nikolsk Monastery. Skillful housekeeping and hard work of the sisters led to a true flowering of the monastery. This is proved by the fast growth of the number of the nuns: 115 sisters by 1914.

First of all, the temple inside and outside was renewed (warm aisles were consecrated in honor of the Protection of the Mother of God and St. John the Baptist), new residential buildings, stables and all the necessary economic premises were built.

The sisters worked not only on the land, but also engaged in needlework – sewing, embroidery, reading spiritual books (the monastery had a small library).

The icon of St. Nicholas was still held in high esteem. Three copies were made of it that were hung around the neighbouring villages and fields. Frequent prayers were conducted in front of the original at the request of the devout local residents.

In a short time, the monastery became strong enough to provide charity: during World War I, the sisters sewed clothes and fur coats for the Russian army soldiers.

The history of the St. Nicholas-Solba convent was interrupted in November 1918 after it was abolished and an agricultural commune “New Life” was formed in its place. The nunnery existed for a short time. Abbess Makariya and some sisters were discovered and arrested. Their fate remains unknown.

Meanwhile, the monastery was converted to a parish, and then closed altogether. According to the State plan of struggle against relics of the past – religion, in 1937 hieromonk Paisii and priest Leonid Gilyarevsky, serving in the monastery, were arrested and shot. Members of the Commune in three years threw to the winds all the wealth of the monastery, dismantled many of the buildings.

During World War II it housed an orphanage and later a hospital for the mentally ill. The church of the Assumption was used as a canteen and clubhouse. In the left side-altar there was a furnace room. The interior space of the temple was completely distorted by partitions. All windows of the church and the building were covered with bars. In the 60’s the unique walls with towers were dismantled for road construction.

When in 1994 the ancient shrine was returned to the bosom of the Church, its revival seemed impossible. All buildings, communications were in need of major reconstruction.

Only in January 1999, with the blessing of His Eminence Vladyka Mikhey, three nuns arrived at the new location with the Abbess, Nun Yerotyda. With God’s help, under the patronage of St. Nicholas, and with the warm participation of good people, the rebirth of the monastery began.

At present the Uspensky church with side-altars in honour of St. Nicholas has been restored inside and outside (when the main church of the monastery in honour of St Nicholas was taken away, the side-altar of the Uspensky church was renamed to Nicholas), and the church of the Protection of the Mother of God, which was consecrated by the bishop Joseph of Uglich, vicar of the Yaroslavl Diocese, on the day of the Protection of the Most Holy Mother of God in 2001. At the same time a major renovation of the Sisterhood building was made.

The main focus of the sisters’ obedience is needlework, as well as maintaining order in the household – in the kitchen, in the vegetable garden, and in the cowshed. There are currently 15 nuns who live at the monastery.

Despite the fact that the monastery is located among the woods, on major holidays, gathers many guests and parishioners from nearby villages, which have nowhere to put during the meal. The question of building a new room came up sharply. And it was unexpectedly solved. With God’s help and with the help of benefactors, a refectory church in honor of Blessed Xenia of Petersburg was built over the sisterhood building.

Restoration work at the monastery has just begun. All other necessary constructions are waiting for their time and their benefactors. According to the master plan in the future it is planned to build bishop’s quarters, a medical center with a temple in honor of St. Barbara, as in the area there is no opportunity to provide medical care to the local population, pilgrims and sisters, so the monastery will be happy to accept as a nun specialists with medical education. Also, all those who would like to serve God through their profession – teachers, musicians, painters, icon painters, carvers, will be able to find their place in our monastery, realizing their God-given abilities and professional skills. 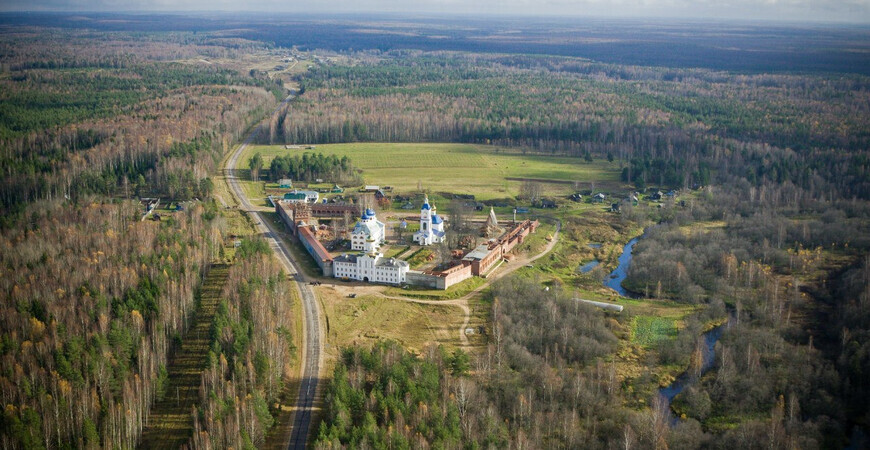 Nikolo-Solbinsky nunnery operates under the auspices of the Pereslavl Diocese of the Russian Orthodox Church. The monastery buildings are located along the valley of the river Solba in the village Solba of the same name, which is located on the territory of Nagoryevsky rural settlement of Pereslavl district of Yaroslavl region.

On the territory of Nikolo-Solba Nunnery annually takes place a unique festival called “Khleb da Solba” that popularizes the traditions of Russian hospitality.

During the festival there is a large concert program, which takes place on two platforms – the first one is located directly in the monastery courtyard, the second one – outside the territory of the monastery, on the banks of the river Solba. The festival program includes performances by a variety of creative groups in different genres and directions that celebrate traditional Russian history and culture, as well as family values and patriotism.

Also at Nikolo-Solbinsky festival there are many different master classes that help to learn more about traditional Russian crafts, professional activities of blacksmiths, potters, weavers, bakers, needlewomen, housewives, cooks of Russian cuisine, as well as other creative platforms with interactive activities, competitions, traditional games and fun, relay races and contests.

During the festival there are charity events that help children in different areas: social rehabilitation, help to orphans, children with hearing impairments and many others. You can also visit an exhibition of handicrafts, paintings and photographs.

The history of St. Nicholas-Solba Monastery goes back to the XIV-XV centuries. At that time the monastery was founded by a pupil of Sergius of Radonezh and was for men. It was situated in the area of Byltsina field, which is approximately in 3 kilometers from modern location of the monastery.

The name of the monastery was given in honor of its central shrine – the icon of St. Nicholas. Also in honor of this saint was built the very first temple of wood, which burned down back in the XV century.

In the XVII century, the Nikolo-Solba Monastery was destroyed by Poles. For almost a century after the devastation, its territory was in disrepair. Only in 1711, the monastery was built anew, but already in another place – on the bank of the river Solba. In the same year St. Nicholas temple was erected, which existed until 1804. Over time the church became dilapidated, so the icons and iconostasis were moved to a stone temple of the Assumption of the Mother of God. It was erected in 1731 and is the only temple in Nicholo-Solbinsk monastery that survived.

During the Soviet Union, the Nikolo-Solbinsky monastery was transformed into a commune, and sacks of grain, oats and rye were confiscated from its stores. In 1937, the last local priest and abbots were shot. At the monastery there was a hospital for the mentally ill. But it was also completely looted during the perestroika period.

Only in 1994, Nicholo-Solba Monastery was returned to the faithful. Permanent residents moved into the monastery in 1999. Initially they lived in a building of the XIX century. Later it was restored and rebuilt.

Side chapels of the church of the Assumption of Nicholo-Solba Monastery were consecrated in the period from 2001 to 2003. Here are kept relics of the Glinsky elders, as well as many other particles of relics of saints and martyrs. In the church you can also see an icon of Nicholas the Wonderworker.

There are several active churches on the territory of St. Nicholas-Solba Monastery, and others are being built and reconstructed.

The temples of Nicholo-Solbinsky monastery:

READ
Kykkos monastery on Cyprus, description and how to get there

How to get to the Nikolo-Solba Nunnery

Nikolo-Solbinsky monastery is located in the place Solba of Pereslavl district of Yaroslavl region.

From Yaroslavl the route goes through Pereslavl-Zalessky. You can get there by intercity bus from the bus station. Then in the town Pereslavl-Zalessky change by bus № 106 or 110 to the village of Nagorie, from which you go by bus also.

When traveling by your own car, follow the following routes: