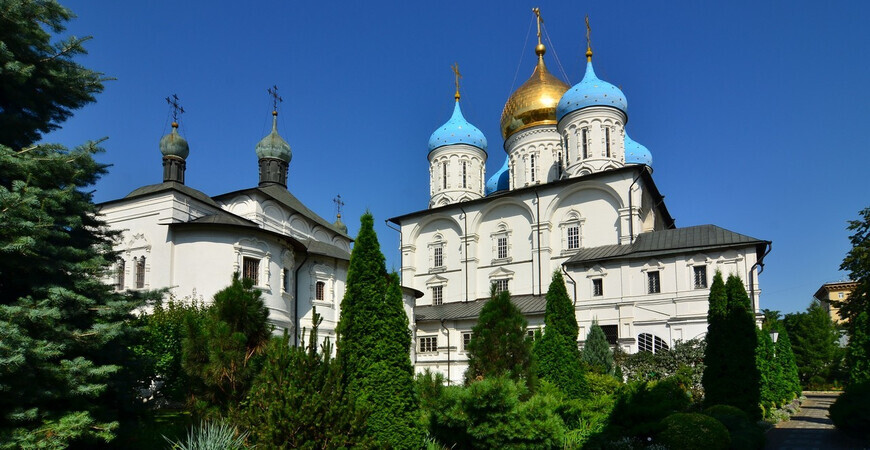 Novospassky stauropegial monastery is one of the largest functioning monasteries in Moscow. A huge number of parishioners, people in need of help, visitors interested in history, culture, Orthodoxy, as well as ordinary tourists visit the monastery every day.

A variety of Orthodox relics are carefully preserved in the monastery: parts of the robe of Jesus Christ, the remains of the vestments of the Mother of God, the family jewels of the Romanov royal family, and the treasures of their relatives and ancestors.

The architectural ensemble of the monastery is an example of traditional Moscow architecture of the XVII-XVIII centuries. There are five churches, a publishing house and a Sunday school in the monastery.

The schedule of services in the Novospassky monastery:

The courtyards of the Novospassky monastery:

There are several churches on the territory of the Novospassky stavropigial monastery.

The temples of the Novospassky Monastery:

Originally the main church and other buildings of Novospassky monastery were built of wood. But as early as in 1491 the first temple in stone was laid there, consecrated in honor of the Transfiguration, which functioned until 1497, after which it was completely demolished.

In 1645, on the territory of the future monastery began the construction of the Cathedral of the Transfiguration. It was built directly over the tombs of the Romanov family. The imposing cathedral was crowned by a five-domed dome. The temple was erected along the lines of the Assumption Cathedral, only a little smaller in size. Until now, you can see the frescoes of the XVII century. The cathedral was consecrated in 1649.

In 1650 on the north-west of the monastery was built St. Nicholas church. Next to it there is a bell tower built in 1759. On the second tier of the building is the church of St. Sergius of Radonezh.

The Church of the Intercession of the Holy Virgin was built in 1675. It was consecrated three times: in 1675 at the end of the construction, in 1813 after the end of the war with Napoleon, as well as in 1997. In the church there is a miracle-working icon of the Savior of Khlynovsky in Vyatka.

In 1795, the Church of the Icon of the Sign of the Mother of God was built. Znamensky temple is also the burial vault of Sheremetev family.

Novospassky stauropegial monastery is considered one of the oldest monasteries of the city. At the beginning of its existence it was located on the territory of the Danilov Monastery, and later – on the territory of the Kremlin. At the end of the XV century the monastery moved to the Krutitsky Hill, located on one of the banks of the Moscow River.

At present, there is a church in the name of St. Roman Sladkopevets, who was the patron saint of the family. Here you can also visit a small museum, which tells about the history of the monastery.

The interior of the Novospassky monastery on google panoramas

The appearance of the Novospassky Monastery has changed over the course of its existence. The first stone walls appeared here only in the 17th century. They also fulfilled an important strategic function – to protect Moscow from enemy attacks.

At the main entrance to the monastery there is a gate, on which there is a bell tower of the XVIII century, which is one of the highest in the city – 78 meters. The central temple of the monastery – the Cathedral of the Transfiguration – was built in the XVII century. Inside it, you can see ancient paintings, among which there is a unique picture of the family tree of the Romanov family. On the porch of the cathedral are depicted 10 ancient philosophers: Aristotle, Plato, Homer and others.

Not far from the cathedral is the Church of the Intercession of the Blessed Virgin, built in the XVII century. Nearby is the church of the icon of the Mother of God “The Sign” of the XVIII century, built in the style of classicism. Here is the burial vault of some famous Russian aristocrats: the Cherkasskys, the Sheremetevs, the Urusovs and others.

How to get to Novospassky Monastery

Novospassky Stauropegial Monastery is located in the Tagansky District of the Central Administrative District of Moscow.

The nearest Moscow metro station to the monastery is Proletarskaya. It is located on Tagansko-Krasnopresnenskaya line.

You can also use cab services in Moscow: Yandex. Cab, Uber, Gett, Maxim, cab Veset, Citimobile and many others. 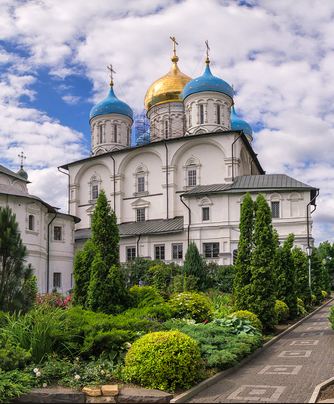 The Novospassky Monastery in Moscow is a stavropigial monastery of the Russian Orthodox Church, located on the bank of the Moscow River, behind Taganka, on the Krutitsky Hill. It is known for its close ties with the Romanov family. The architectural ensemble was formed in the XVII-XVIII centuries.

Founded in 1490 with the name of Spas Novy by Grand Duke Ivan III, who transferred the brotherhood of the Kremlin monastery of the Savior on Boru outside the city. The latter appeared about 1330 under Grand Prince Ivan Kalita. 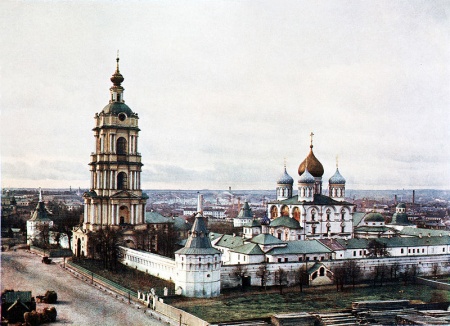 The first stone cathedral of the Transfiguration was built in 1494. The monastery began to enjoy the tsarist favor and acquire a modern look after the coming to power of the Romanov family, whose family burial vault had long been in the Novospassky Monastery. In 1646-1649, the future patriarch Nikon was the archimandrite of the Novospassky monastery.

Since 1935 the territory of the convent was under control of the economic department of NKVD. All monastery buildings were rebuilt for domestic use or as living quarters. Eviction began in 1960. In 1968 it was decided to organize “a museum of history and modern restoration practices in the USSR” on the basis of the monastery.

The restoration work dragged on for many years. It was planned to open the Museum of the History of Restoration in the cathedral. A large restoration center existed in the monastery from 1985 until the end of 1990 when it was decided to return it to the Moscow Patriarchate. 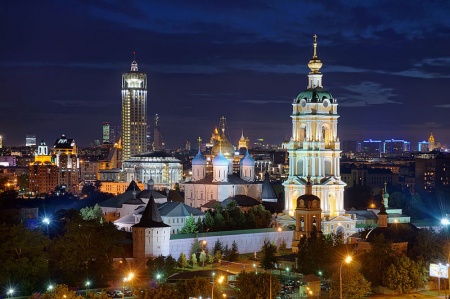 The revival of monastic life began in April 1991. In July of the same year the men’s choir of the Novospassky monastery was created.

In 1995, the ashes of Grand Duke Sergei Alexandrovich, who was killed 90 years before by the terrorist Ivan Kalyaev, were transferred here. A memorial cross was erected on the territory of the monastery, recreated according to a surviving design by Viktor Vasnetsov, an exact copy of the monument that existed in the Kremlin.

In February 2014, Patriarch Kyrill consecrated a 16-ton “Romanov” bell, which was cast to replace the historic bell destroyed in the 20th century.

On February 5, 2015, the relics of the Holy Great Martyr Demetrius of Thessaloniki, the imperishable right hand, were brought to the monastery from Greece. Bringing the reliquary with the relics of the saint is dedicated to the 70th anniversary of the victory over fascism: in Russia the memory of St. Demetrius of Thessaloniki from ancient times was associated with a military feat, patriotism and defense of the Fatherland. 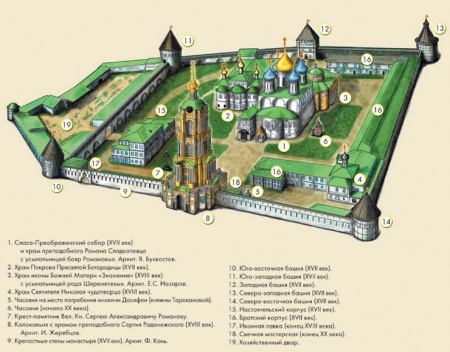 In the basement of the Transfiguration Cathedral are buried boyars Zakharyinyi-Koshkins, ancestors of the royal house of Romanovs, their relatives Princes Sitski, as well as Cherkassky, Yaroslavsky, Obolensky, Troekurov, Trubetskoy, Naryshkin and other representatives of the high nobility of pre-Peter time. The masterpiece of memorial sculpture was a monument on the grave of V. D. Novosiltsev, made on the project of V. I. Demut-Malinovsky.

The Church of Znamenskaya next to it was a family burial vault of Counts Sheremetevs, Princes Kurakins and Lobanov-Rostovskys. In 1742 in the basement of the previous church in the presence of Empress Elizabeth the Chancellor of State A.M. Cherkassky was buried.

Within the monastery walls in XVIII-XIX centuries a necropolis with a large number of aristocratic burials was formed. Here were buried painter F. A. Rokotov, mayor N. A. Alekseev, historian P. P. Beketov, actor I. A. Gagarin, Decembrist P. P. Titov.

Of historical interest was the tomb of Priest Peter Veniaminov, who did not give up the treasures of the monastery to the soldiers of Napoleon’s army and was killed by the French. On his tombstone was inscribed the epitaph: “Here modestly is buried the altar servant, a hero, who tasted death – for the faith, for the Tsar. There are also allegations that it was on the territory of the Novospassky monastery that the former Princess Tarakanov found her last resting place.

In the late 1920s, like other noble necropolises, the Novospassky monastery cemetery was destroyed. The most valuable monuments from an artistic point of view were transported to the Donskoi monastery; some of them were later scrapped. A small number of the surviving headstones are now on display in the monastery courtyard.

The museum of the Novospassky monastery was created to coincide with the 20th anniversary of the monastery rebirth. It was opened on August 19, 2011. The museum is located on the place of the burial vault.

December 10 is the celebration of the icon of the Mother of God “The Sign” – the patronal holiday of Znamensky temple. Repair and restoration works are being conducted in the church at present time. Services are not being held in the church.

On August 31, the Novospassky Monastery solemnly commemorates the icon of the Mother of God “All Tsatsaritsa”. Her venerated image since 1995 is in the Novospassky monastery, located in the gallery of the Savior Transfiguration Cathedral.

September 4 is the day of the memory of the martyr Makary (Gnevushev), Bishop of Orlov. In 1909-1914, he was the rector of the Novospassky monastery.

November 3 is the day of memory of the martyr Pavlin, archbishop of Mogilev. The martyr Pavlin (Kroshechkin) was tonsured a monk within the walls of the Novospassky monastery.

Employees of the excursion service make excursions on the following themes:

– Overview of the architectural ensemble of the monastery.

– Review of the architectural ensemble with a visit to the Transfiguration Cathedral and the Mausoleum of the Romanov boyars.

– Overview of the exposition of the Museum of the Novospassky monastery.

– Excursion along the ancient walls.

The sightseeing service of the Novospassky monastery is open daily from 10.00 to 16.00.

To order tours, sign up for a guided tour and for more information you can visit the Excursion Service at the entrance to the monastery, as well as by phone: 8(495)676-77-13 or by writing to us: nm.palomnik@gmail.com.