Rabbit Island of Okunoshima: Secrets, how to get there

Okunoshima Island (大久野島) in the Inner Sea of Japan is located near the city of Takehara (Hiroshima Prefecture). Its area of 0.7 square kilometers is also known to tourists as Rabbit Island (ウサギ島) because it is inhabited by many of these big-eared fauna. It has a temperate climate, and the mild, warm weather is due in no small part to the mountain slopes that keep the seasonal winds out.

Secrets of the Island

The appearance of wild rabbits here is connected with historical events, which refer to the Japanese-Chinese War (1894 – 1895). The three 26-strong fisherman family, who lived on the island at the time, saw Okunoshima turn into a military base. Ten fortifications were erected there to protect against the enemy. This forced the locals to leave the place they were living in.

During World War II, the island was no longer listed on world maps because of the secret military facilities built for the manufacture of toxic gases. Hence another name for Okunoshima, “Poison Island. While the last world war was going on, six kilotons of mustard and tear gas for chemical weapons were produced here. When Japan surrendered in that war on September 2, 1945, the buildings where chemical weapons were produced were destroyed on Okunoshima. Those involved in the production moved to other Japanese regions and left the island deserted.

Officially, it is claimed that there are no hazardous substances on the territory. However, it is believed that there are caches of chemical weapons in the area, and the ruins of the plant are just as dangerous. It is forbidden to enter them, but tourists try to get into the former laboratories.

How did the long-eared furballs appear on Okunosima

Rabbit Island is home to over 700 furry inhabitants. They feel like masters here and freely roam the territory. According to one version, they are the descendants of those big-eared fauna, on which experiments on the effectiveness of poison gas were conducted. It is believed that after the destruction of the traces of chemical weapons production, the remaining animals were released into the wild. But such a claim is rejected by Mr. Murakami, former head of the Poison Gas Museum, who testifies that the test rabbits died after the destruction of the factory storages.

According to the second version, 8 rabbits were brought to the deadened area in 1971 by Japanese students who arrived here on a field trip. Over the years on lifeless Okunosima, the animals produced more than one offspring. And now there is a plentiful population of them, which inevitably replenishes with new offspring. The animals on the Island of Rabbits live free and well, nothing threatens them, as there are no other animals here. Having become a tourist destination, Okunoshima attracts a large number of visitors. Apart from the secrets associated with dangerous production, travelers are attracted to the opportunity to interact with the eared animals, the desire to feed them and stroke the soft fur of the tame animals.

Rabbit Island attraction in the form of furry inhabitants rivals the symbol of Japan – the volcano Fujiyama . Each year, these animals receive up to 100 thousand visitors. The big-eared ones are not afraid of tourists, jump on their laps and happily devour the treats they bring. These are cabbage, carrots, or a special food sold for $1 at the island hotel Kyukamura Okunoshima Resort.

Rabbits especially need extra offerings in the winter when food is scarce. But as the warm season arrives, the rabbits regain their fatness and expose their round sides to the sun’s rays.

Other attractions on Okunosima are represented by:

The island has been home to the Okunoshima Poison Gas Museum since 1988. The exhibits demonstrate the deleterious effects of toxic chemicals on all life. The island area is now the World War II Park.

There is a low hill in the center of Okunosima. You climb it by one of several trails coming from different parts of the island. The walk ends with a view of the sea panoramas from above and a chat with the rabbits. They’re not as well-fed as their waterfront counterparts, so you should head up the hill with a supply of food for them.

How to get to Okunosima

The trip to Rabbit Island from Hiroshima is planned for the morning.

When you arrive at Tadanoumi on the way to the port it is worth stopping at the Combi (market is open 24 hours a day) to buy food for the fluffy animals.

Faster way to get to the island is to take a ferry directly from Takehara. A one-way trip will cost 310 yen.

Relatively recently Okunoshima appeared on the map of Japan again. Interest in the attraction is increasing among tourists. Although Rabbit Island is a considerable distance from the archipelago. There is a great desire to touch the nature of this mysterious and amazing place. 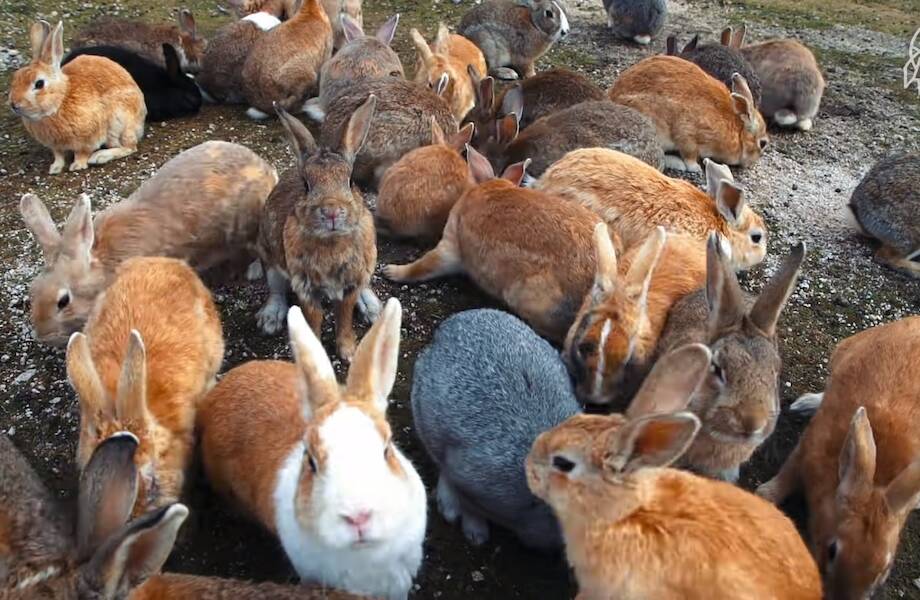 About 100 years ago, which is not that long ago by historical standards, the Japanese island of Okunoshima was wiped off the map as if it had never existed. But now thousands of tourists come there with one purpose: to get acquainted with the island’s only inhabitants – rabbits. What is the history of this mysterious island? 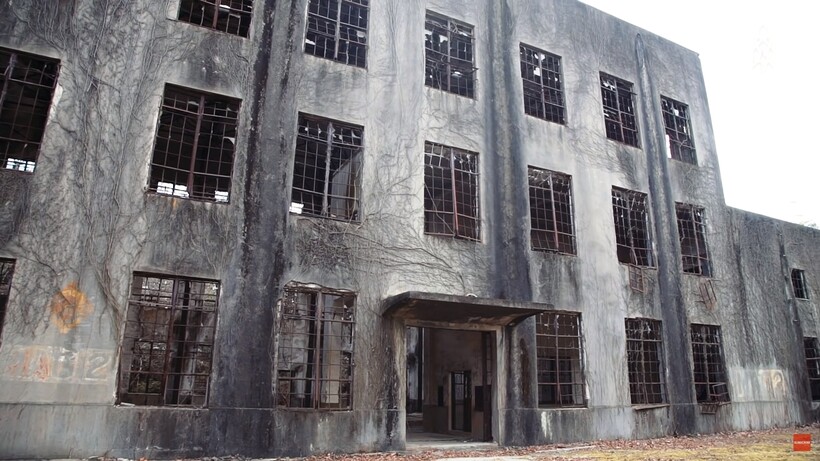 In 1910-1930, many developed countries thought of effective weapons. Toxic gas was one of them. It began to be produced and stockpiled in both European countries and America. The Japanese, who have always sought to defend their small country with dignity, decided to keep up and also built a large plant where they created kilotons of mustard and tear gas. A cold calculation for the plant was to choose the island of Okunoshima: it was far enough away from the big islands and in case of an emergency the main population of Japan would not be affected. 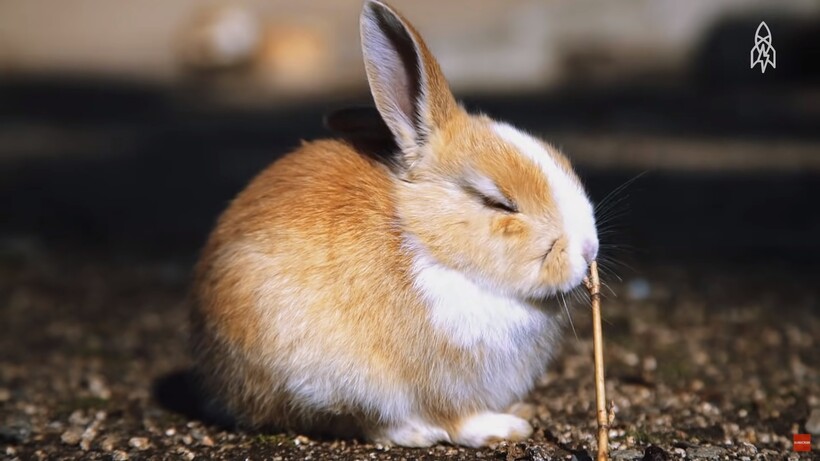 The plant operated for a full 16 years until the end of World War II, but then the Japanese decided to follow the Geneva Convention, adopted back in 1929, which prohibited the use of toxic and bacterial weapons. The plant became unnecessary, as did the workers, and so did the island. For a long time, Okunoshima was classified, and all documents and materials on its activities were destroyed. But in the 1970s, excursions for schoolchildren and Japanese citizens began to be organized there. They were told about the harm caused by hazardous gases and how destructive they are for the population of the Earth and the planet’s ecology. That’s when people started noticing a few rabbits living on the island. 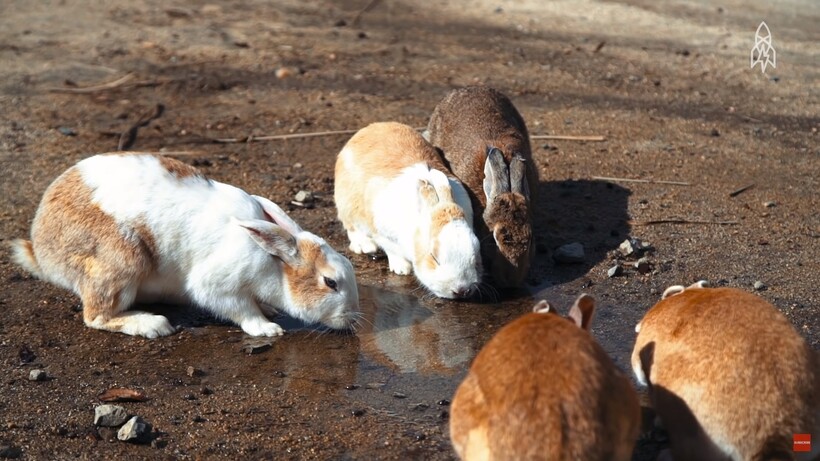 Every year the population of eared inhabitants of Okunosima grew exponentially, and by the mid-2000s it exceeded 300 animals. At the same time a video about the “island of rabbits” appeared on the Internet, and tourists poured there by the hundreds. The businessmen immediately predicted their profits and built not only a hotel for rabbit lovers on the little island, but also a museum about the old gas plant. Now there are more than 1,000 big-eared rabbits on the island, and the number of curious tourists a year is more than 200,000. But where did the rabbits come from, and why are there no other animals? 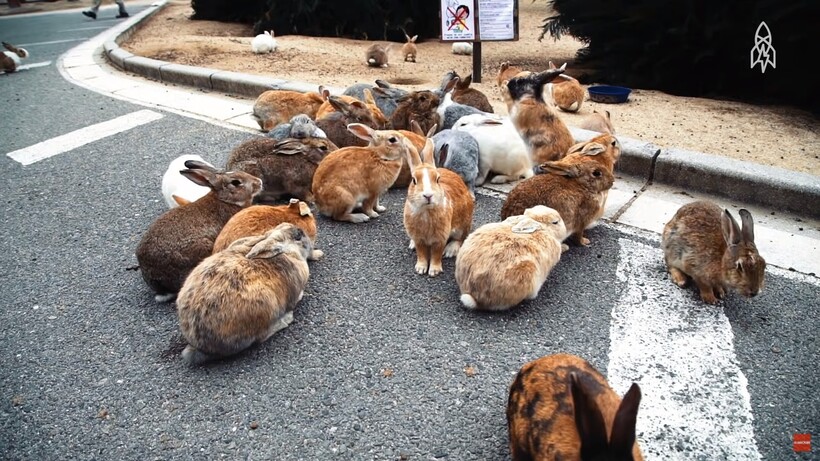 In fact, this is a mystery covered in darkness, and no one knows exactly how things were, because for a long time the secrets of Okunosima were kept not only by the state, but also by former factory workers, who were threatened with the status of traitors to the motherland for divulging the secret. However, there are several theories, and here is the most popular and credible one: when the plant was founded, local animals and birds fell from toxic emissions, which spread across the island. But the labs kept a few rabbits on which they conducted experiments and tests.

After the closure, however, the lab staff released the rabbits into the wild, and they began living their lives in a place free of humans and predatory animals. The years have taken their toll, and “rabbit country” emerged on the place of the dangerous island. By the way, the authorities of Japan appreciated the idea of nature and support it: it is strictly forbidden to bring any animals to Okunoshima, and it is also forbidden to take out or hunt rabbits. 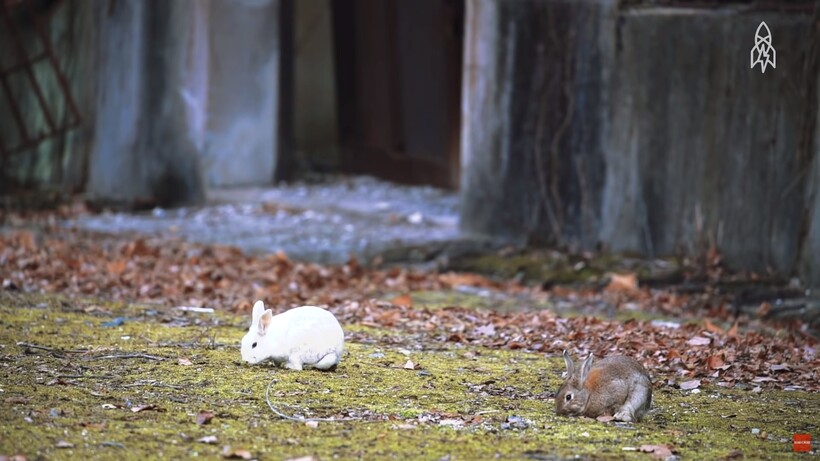 Bunnies, despite their wildness, are almost tame and are not afraid to come out to people, so the trip will please every lover of our little brothers. There remains one question that is silenced: are there still gaseous toxins on the island and are they dangerous to tourists? The Japanese delicately prefer not to answer this question, but if you think about it: the rabbits are alive. Would you risk going to this island? By the way, there are other such places in the world, for example, in Zao Kitsune Mura live only foxes.

Join our community on Telegram, we are already more than 1 million people