Musée d’Orsay in Paris is a huge collection of works of art and applied art, which is of cultural value to the whole world.

The Musée d’Orsay is a famous museum located on the left bank of the Seine. It is a treasure trove of art collections, scandalous sculptures, architectural models and unique pieces of furniture.

Today it is a must-see for visitors to the French capital who are interested in culture. It is one of the most unusual and entertaining museums in the world. Its popularity was brought by collections of works of such masters as Cézanne, Degas, Monet.

History of the Orsay Museum

A train station was built in 1900 and opened to coincide with the World’s Fair. It served the southwestern region of France until 1939. It was this building that later became the home of the museum.

When the station platforms became too small for the elongated trains, it was used to serve smaller trains. During World War II individual rooms were occupied by the postal services.

After that, the station served as home to the Renaud-Barrault theater company. Auction houses were located there and the Hotel Drouot was reopened until January 1, 1973.

The main hall of the museum is astonishing in its scale: its length is 140 meters, and height is 32 meters.

In 1977, the government decided to give the territory of the station lost its former glory under the museum. The reconstruction took about 10 years, and December 1, 1986 the opening ceremony was held with French President Francois Mitterrand.

Orsay Museum in Paris is a unique place, within the walls of which were collected collections from different parts of France and all over the world. On three floors there are more than 4 thousand pieces of art. Masterpieces of outstanding creators and paintings of almost unknown authors create a unique atmosphere.

The first level welcomes sculptures of the masters Henri Rousseau, Edouard Manet and others. One of the rooms is set aside for the works of Claude Monet. There are his famous works “Olympia”, “The Regatta at Arjatay”. Another part is devoted to Gustave Courbet, the founder of realism.

The second level delights with paintings of symbolism and naturalism and masterpieces of such sculptors as Rodin, Majol, Bourdelle. Here it is worth to pay attention to the thundering work of Auguste Rodin “Balzac” and the statue of a dancer by Degas.

The paintings of the Musée d’Orsay continue the works of Bonnard and Vuillard, hidden from view by the huge sculpture “White Bear” by Master Pompon. The collection ends with a number of Symbolist works, including Klimt and Munch.

The third floor is a paradise for lovers of art and beauty. Here one can fully enjoy the works: Claude Monet, Vincent van Gogh and others.

The pearl of the collection, which everyone wants to see without exception, is the “Starry Night over the Rhone” by Van Gogh. This painting attracts a large number of visitors.

On the site of the museum, even before the building of the station, there was an old palace with the same name. Subsequently, it was destroyed.

It is impossible to pass by Edouard Manet’s work, Breakfast on the Grass. We can only assume how shocked the representatives of the nineteenth-century beau monde were when they saw a naked lady in the company of dressed gentlemen.

On the first level of the terrace, running along the Seine, is a sculptural group “Mature Age”, the author of which the pupil and mistress of Auguste Rodin Camille Claudel. It was created at a time when Rodin left her for his former lover.

If you move around the city by metro, the nearest station is Solférino on the M12 line. For those visiting Paris for the first time, the main clue is Boulevard Saint-Germain, in the western area of which the site is located.

The cost of admission is 12 EUR. Admission is free for minors and disabled accompanied.

You can use the services of a guide and order a full guided tour. Usually the tour lasts about 2-2,5 hours. The average cost is 150-170 EUR.

By the way, to learn about current events and exhibitions, as well as to see the available collections, you can visit the official website of the Musée d’Orsay in Paris – www.musee-orsay.fr .

Works at the Musée d’Orsay

Gustave Courbet, The Artist’s Studio (L’Atelier du peintre): A Real Allegory of a Seven Year Phase in my Artistic and Moral Life, 1855

Eugène Boudin, Bathers on the Beach at Trouville, 1869

“The Origin of the World” (fr. l’Origine du monde, 1866) is a painting by the realist painter Gustave Courbet that was long perceived as an artistic provocation and was not exhibited for over 120 years. 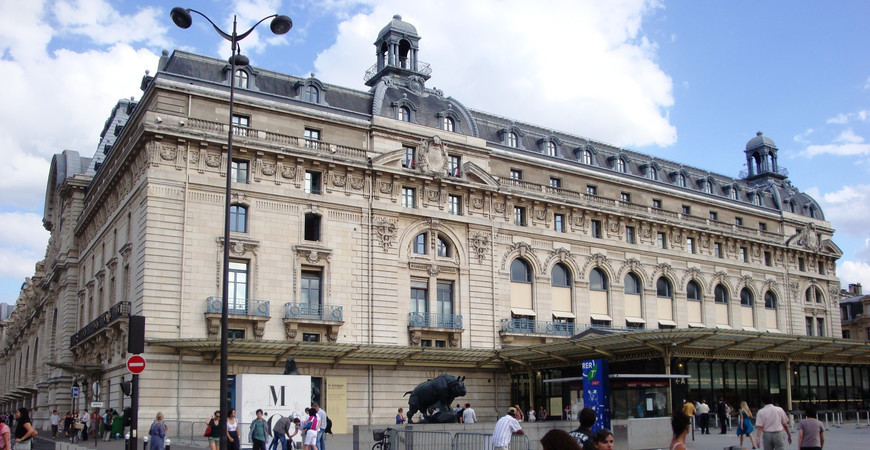 Musée d’Orsay (Orsay) is a museum of fine and applied arts in Paris on the left bank of the river Seine. Musée d’Orsay is one of the most popular and frequently visited museums of the French capital.

The museum has the world’s largest collection of European painting and sculpture from 1850 to 1910. The museum exhibition occupies five levels, on which all kinds of art are represented: painting, sculpture, architecture, cinema, photography and music.

In addition, the Musée d’Orsay regularly hosts various performances, concerts and festivals. Visitors are also given the opportunity to attend conferences and roundtables related to temporary exhibitions.

Tickets to the Musée d’Orsay

The price of tickets to the Musée d’Orsay varies depending on the type of art and time of visit. You can buy tickets to the museum of the capital of Paris directly at the box office before the visit or online on the official website. You can also buy combined tickets with which you can visit two museums in Paris, located next to each other. You will discover one of the best collections of Impressionist art in the Musée d’Orsay and see masterpieces by Matisse, Picasso and other famous artists in the Musée de l’Orangerie.

The museum is located by the St. Martin canal. Tourist cruise ferries also run here. You can take a cruise from the museum d’Orsay to the park La Villette.

The collection of the Musée d’Orsay: paintings, works of art, and sculptures

The collection of the Musée d’Orsay has more than four thousand grandiose works of art, and they are presented on three floors.

The first floor of the Musée d’Orsay is interesting not only for its exposition, but also for its interior. Along the center are two rows of sculptures that resemble a railroad, and on the two sides in the side halls are works of painting. Of the sculptures, there are works by Carpeau, Ugolino, and Cordier.

The paintings on the second floor are works by naturalists and symbolists. There are also examples of decorative art of the Art Nouveau period, and sculptures by Mayol, Rodin, Bourdelle.

Some of the most famous works on the top floor are as follows: “Breakfast on the Grass” by Manet, “Poppies” by Monet, “Absinthe” by Deguy, “Ball at the Moulin de la Galette” by Renoir, “Woman with Umbrella” by Monet, “Cradle” by Berthe Morisot, “Apples and Oranges” by Cézanne, “Rousseau’s The Snake Charmer, Seurat’s The Circus, Toulouse-Lautrec’s Portrait of Oscar Wilde, as well as works by Renoir, Sisley, Pissarro, Redon, Manet, Mondrian and others.

Infrastructure of the Musée d’Orsay

The Musée d’Orsay (Orsay) is so large that it even has its own developed infrastructure. The museum has a restaurant, two cafes, a bookstore, dressing rooms, a souvenir shop, toilets, canes for children and wheelchairs.

The restaurant at the museum was founded in 1900 and is located on the first floor of the museum. The restaurant has preserved all its splendor since its opening, that is, since 1900. In this setting, sampling traditional French cuisine will be even more enjoyable.

READ
What is Pinacoteca Brera in Milan?

At the entrance to the Musée d’Orsay there is a bookshop where you can also buy stationery, postcards and other supplies. There are also souvenir shops.

Campana is located on the 5th floor of the Musée d’Orsay. Here you can taste French cuisine and enjoy the view over Paris.

The hours of the cafe are:

Café L’Ours was named after the “White Bear” sculpture by François Pompon, which is located across the street. The cafe offers sweets and refreshments.

Tours of the Musée d’Orsay

The Musée d’Orsay is housed in a former train station and adjacent hotel. The station was built especially for the World’s Fair in Paris in 1900. The land in the center of Paris opposite the Louvre was allocated for the construction.

The station was built by the talented architect Victor Laloux and served Paris-Orleans flights. By 1939 trains stopped running from the station and in 1971 they decided to demolish the station building. But by happy coincidence the building was saved. And then it was decided to turn the station into a museum.

In 1978 it was given a status of a historical monument, and in 1980 it was started to be reconstructed. So in 1986 the museum was opened by Italian architect Gae Aulenti. Today the museum d’Orsay is one of the most visited attractions in Paris.