The old 19th-century arch bridge is near the Scottish village of Milton, next to the mansion of Overtone.

In the state of Great Britain, near the village of Milton, there is a Gothic mansion Overtone, built in the 18th century. The manor house has belonged to the White family for the second century.

One of the first owners of the castle was a young and ambitious man named James. He decided to expand the family estate, on which a spectacular stone mansion was built. The Whites’ lands ended with a large waterfall, and then the church property began.

James was able to have a large piece of land annexed to the family property and connected the lands shared by the waterfall with a fundamental stone bridge.

The bridge built was about 15 meters high and featured a sturdy stone construction, majestic beauty of execution, as did the main building of the estate.

Overtone Bridge is recognized as one of the anomalous places in the country, but it is not clear what this is and what exactly has influenced the regularly recurring strange and sad events that occur on it.

The fame of the bridge “killing four-legged friends” did not arise at once. For more than half a century the bridge performed its main function properly, and no strange things happened on it. One day, in the middle of XX century, strange and mystical incidents began to happen.

People claimed that dogs jumped from the same spot from the Overtone Bridge, dashing down from a height of 15 meters. Almost all of the animals died instantly, hitting the rocky ground, but some dogs survived and would later jump again from the same spot after falling. The four-legged friends have been found to make leaps of death at the same time, as if some unknown force were dragging them along.

Such actions occur regularly, which cannot but cause bewilderment by attributing “devilry” to the place.

There is a legend: the father of the family, tired of constant intrigues of his son, who does not want to obey his elders, could not cope with the rage and anger that engulfed his mind. Mad for some time, he threw his son off the bridge, but when the veil fell from his eyes, he realized what he had done. He saw the boy’s immovable body on the rocks and threw himself down after him, committing suicide. According to legend, the boy’s soul remains near the site of his death and since he is very lonely alone, he calls animals to him to play with them. The dogs, mistaking the phantom tomboy for an ordinary boy, jump to meet him, wagging their tails merrily.

In the period since the dogs began jumping off the bridge, the count of dead animals already goes into the hundreds.

In the 10 years since the first sad incident alone, more than 100 dogs have died by jumping off the bridge. Scientists who came to Overtone Manor were never able to understand what caused such animal action.

Scientists in the field of zoology, veterinary medicine and other specialists were also invited to unravel what moves the four-legged dogs. It has been suggested that hunting dogs have very developed instincts, and they smell mice living in the cumbersome structure of the bridge. But the assumption that dogs jump from a tall structure, following their hunting instincts, does not seem real, since in any living creature the instinct of self-preservation always comes first.

The mystery of why dogs jump from the same parapet has never been solved.

It is also rumored that there is a portal between the two worlds – the living and the dead, and, as we know, animals are much more sensitive to such places than people.

There is also a very creepy suggestion that the opening of the portal is facilitated by the blood of our faithful and loyal four-legged friends, the dogs.

What is true and what is fiction is not known. There are far more questions than answers, but the fact of regular dog deaths on the ancient Overton Bridge for over sixty years is irrefutable. 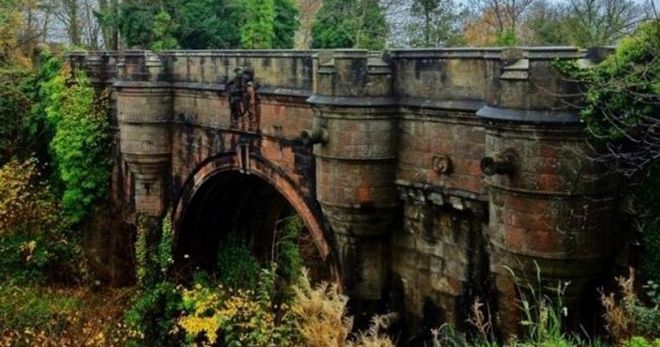 Scotland’s Overton Bridge is one of the mystical places on the planet that attracts the attention of philistines and scientists alike. It connects the ancient manor of Overtone with a huge piece of church land. The structure has attracted the constant interest of tourists from all over the world for a very unusual reason.

History of the construction of the bridge

The territory was thought to be acquired and annexed to his estate by Sir D. W. Overtone in the XIX century. Since the land was separated by a small river, it was decided to build a bridge. The construction was completed in June 1895. The author of the project was engineer Henry Ernst Milner. The bridge was named after the mansion located next door. The structure consists of three arches – a large central one and two smaller ones at the edges. The Overton Bourne River flows under the middle arch.

The mysteries associated with the bridge

Until the middle of the twentieth century, this was a very ordinary pedestrian bridge. The first unexplained event occurred in the 1950s. That is when the first suicide of a dog occurred here. The animal simply jumped off one of the niches of the bridge. Given that the height of the structure is 15 meters, the jump was fatal.

Gradually the number of tragic accidents began to grow and by 1955 reached 50. The bridge gained notoriety, especially after one stunning fact became known. If a dog survived by some miracle, it would climb back up the structure to jump headfirst down again. At the same time, all animals commit “suicides” exclusively from one place. They jump from the right side of the bridge, into the arch between the last bays. Of all the dogs, the long-nosed breeds are particularly passionate about suicide. 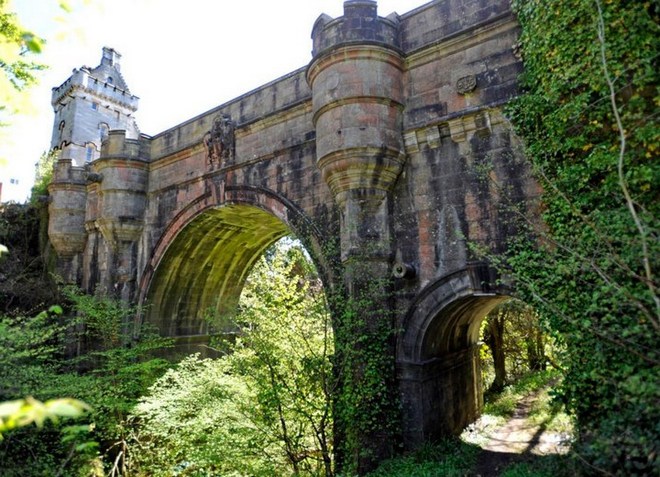 Reasons for the mysterious events

Explanations for the unseen case were put forward in various ways:

Considering that dogs of various breeds regularly jump off the bridge, including ones that shouldn’t be chasing rats at all, the official version is no longer very believable. In addition, the incomprehensible frequency of the jumps is frightening. Deadly flights of the four-legged creatures still occur to this day. Their number has long ago exceeded 200. Therefore, near the entrance to the anomalous zone, a poster was installed, urging owners to keep their pets firmly on a leash when walking through these places. 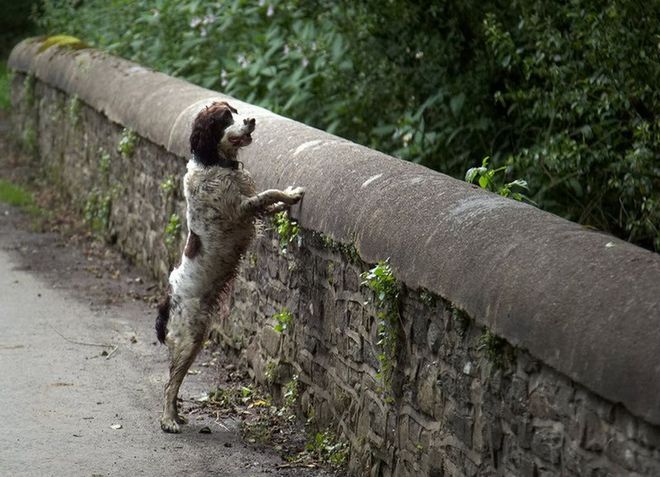 Overton Bridge is located a few kilometers northwest of Glasgow. You can reach it by bus or cab.