Hierapolis and the Cotton Castle

You drive, you drive through the Turkish countryside, you see mountains, Armenian landscapes (not an oversight, it feels that way) – and then suddenly you discover something quite unusual, that does not fit in either the landscape or the landscape.

Pamukkale. It is not just a beautiful place, but also a geothermal resort.

There are 17 geothermal springs with water temperature from 35 to 100 °C in the region of Pamukkale and Denizli. The water from each spring has a different composition, so people used to come here to rest “on the waters” since 2000 BC.

A literal translation of the word “Pamukkale” (pamukkale) from Turkish means “Cotton Castle” or “Cotton Fortress. By the way is very similar in the end, when you look at the travertine terraces from afar, they really look like absorbent cotton.

These pools, the travertines, were formed on the hillside by calcium-saturated water flowing down. For thousands of years, the calcium has been deposited on the surface, resulting in a truly ethereal landscape.

The pattern inside is such that different pools have different depths and temperatures, you can swim there or wade knee-deep in water. The lower it is, the warmer it is.

At one time it was a very large and important city in the ancient world. From the Greek its name translates as “holy city”. Let’s dive into history.

The first buildings on the site of the ancient city appeared in the second millennium BC, but the city itself appeared much later. It is believed that the city was founded by King Eumenes II of Pergamum in. Hierapolis got its name from the queen of the Amazons, Giera, wife of the legendary founder of Pergamon – Telephos (son of Hercules and Auge). In 133 BC the city was already under Roman domination. The city was frequently affected by earthquakes, which are still a major concern to the inhabitants of the area today. The first known large earthquake in Hierapolis dates back to 17 AD. It was almost completely destroyed and rebuilt. Hierapolis flourished under Roman rule until the end of the 3rd century A.D. (https://cappadociavisit.com).

By the way about rebuilding))) – “on the internet” they write that Nero ordered it rebuilt in 69, but there’s a discrepancy: the emperor slit his own throat during the rebellion in Galia in 68. Well, that sort of thing, yeah)

The healing powers of the local springs were known before the Roman Empire, but the city’s popularity as a therapeutic thermal spa – a kind of “pan-Roman health resort” grew during the Roman period. Emperor Hadrian even allowed the inhabitants not to pay “aurum coronarium” (monetary gift of the province to the emperor). We, too, wanted to “go to the waters” and went to see Cleopatra’s pool.

In fact, it is called the Antique Pool. It’s just that in the 1980s, some guides began to tell us that queen Cleopatra of Egypt once bathed here, who came to the thermal springs to heal and rejuvenate. It turned out quite a good “lure” for tourists, but the real life of Cleopatra has nothing to do. None of the historians have confirmed her visit to Hierapolis.

You can take mineral baths all year round. The ancient pool is located next to the ruins of the great Roman thermae, now the Archaeological Museum of Hierapolis. The place where the fresh thermal water always comes from is next to the pool, where you can drink the water; it tastes sour. The water of this spring is not the one that flows through the travertine. It has a completely different composition and no calcium at all. The water temperature is slightly above 35 degrees, so even in November, we were warm to swim.

But to go out of the water is cold)))) Yes, by the way at the bottom of the pool full of antique columns, debris walls, porticos and other similar paraphernalia, so that you need to move very carefully. And definitely do not dive. The guide said that it is the real remnants of the columns of the Temple of Apollo, which collapsed after the earthquake in the VII century AD.) There are all the necessary infrastructure – showers, lockers, cafeteria with delicious ice cream, tables, sun loungers, towels, etc.

So, different wealthy people of that time came here for treatment from all parts of the empire, but some of them died here for various reasons, and in this case they were buried according to the customs of the places they came from. That is why, among other things, Pamukale is the largest ancient necropolis in Turkey with a great variety of tombstones and monuments.

At the end of the 2nd century many more were mowed down by the plague, but under Emperor Septimius Severus the spa was reborn. During the Byzantine Empire the town flourished. Emperor Constantine the Great made it the capital of Phrygia.

The city played an important role in the spread of Christianity. In 80 AD, by order of the proconsul of the Roman Empire, one of the 12 apostles – St. Philip was crucified upside down on a cross. The place of the crucifixion with the ruins of the martirium (place of death) of St. Philip is indicated on the signs – but it’s a decent walk east of the Old Theater. Dato refused to go there – he hovered near the ubiquitous Turkish cats)))

Hieropolis was finally destroyed by an earthquake in 1354. Archaeological excavations in the area began only at the end of the XIX century by the German archaeologist Carl Hooman, the Italian Paolo Verzone began to study the ruins again in 1957. Active excavations in the area continue to this day. Now the best preserved one, it seems to me, is the ancient theater. At one time it was one of the largest theaters in Turkey. It could hold 10-12 thousand spectators. Of course, it is not so well preserved itself) it has been periodically reconstructed over the past 50 years.

In 1988, Pamukkale and the ruins of the ancient city of Hierapolis are included in the UNESCO World Heritage List. The park is open daily from 6:30 am to 7:00 pm. Usually in the summer the opening hours are extended until 23:00, but then in 2020 due to coronavirus restrictions the opening hours in the summer months were also left until 19:00. By the way, near the attraction is the town of Pamukkale, which lives almost entirely by tourists: it is full of hotels, cafes and stores for travelers.

The excursion to Pamukkale is one of the most interesting in Turkey, it is often offered to holidaymakers on the Antalya coast. And, as they say, I was there, wandered through the white stones, swam in Cleopatra’s pool, but I almost gave up the spirit.

Departure from the hotel is usually very early, about 4 am. We go to the mountains, so it is better to use the services of a trusted travel agency or buy a tour from your tour operator, in our case, “Coral Travel”. The bus is comfortable, with air conditioning. Do not forget to bring hats, sunscreen, clothing covering your neck and shoulders, at least 1.5 liters of water per person. You can ask at the hotel for lunch boxes, as at least with us, breakfast and lunch were very meager. 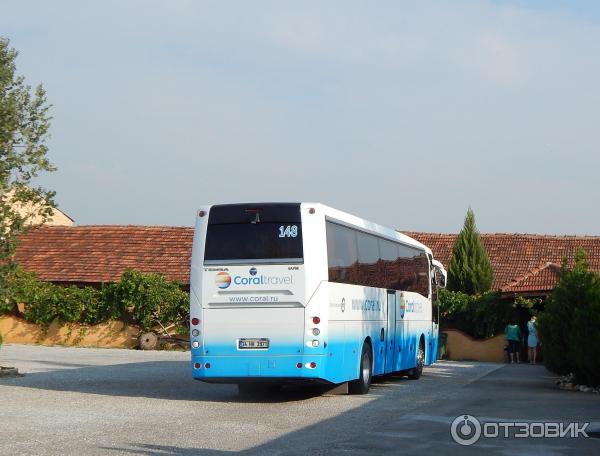 The most unpleasant thing about this day trip is not even the hot weather, but the forced visits to shopping malls on the way to Pamukkale. A textile center, a winery, and an onyx factory are usually among them. The last one still seems more or less interesting. 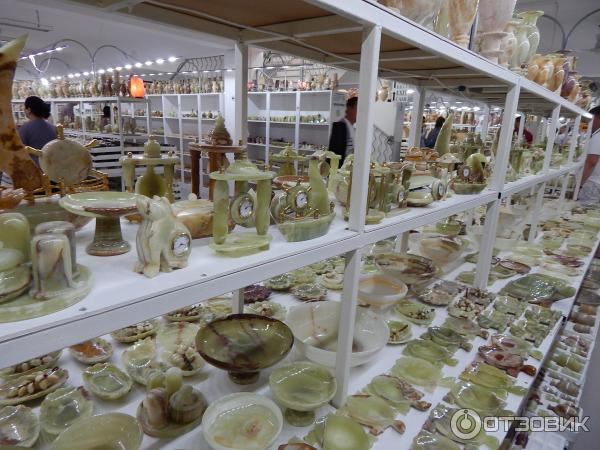 You can wander around like a museum, the prices are high. 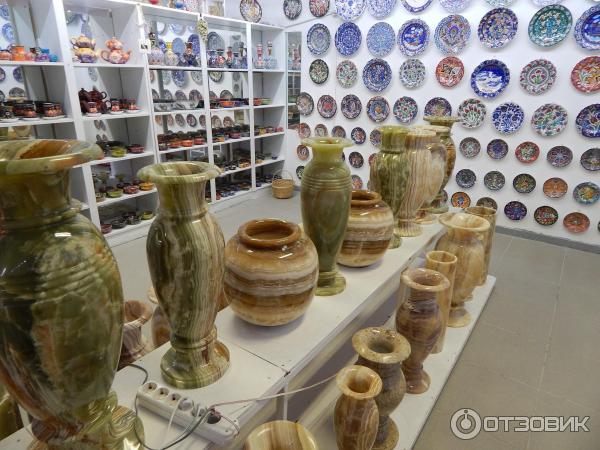 Usually everyone really likes these grapes and everyone tries to take pictures of them. 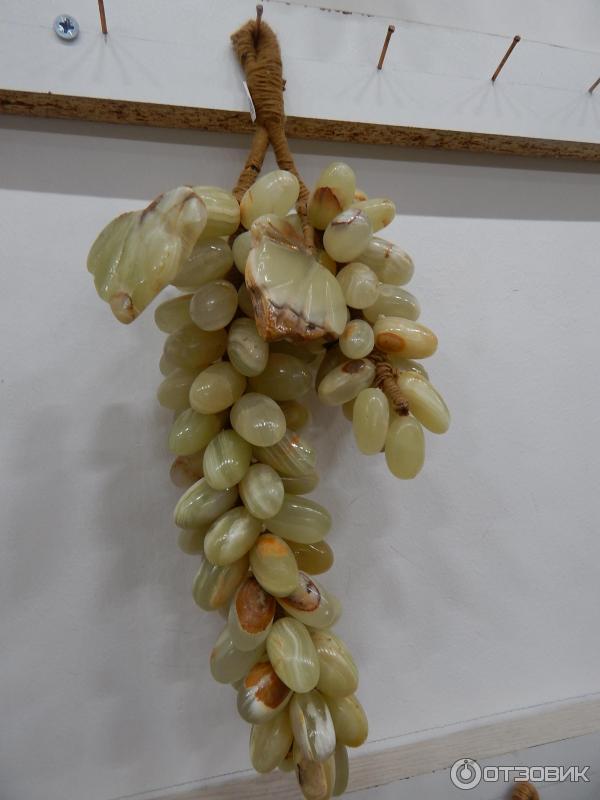 When we come to Pamukkale, the first thing we do is explore the ancient city of Hierapolis, or rather what is left of it. On a large area there are ancient ruins: columns, arches, building foundations. 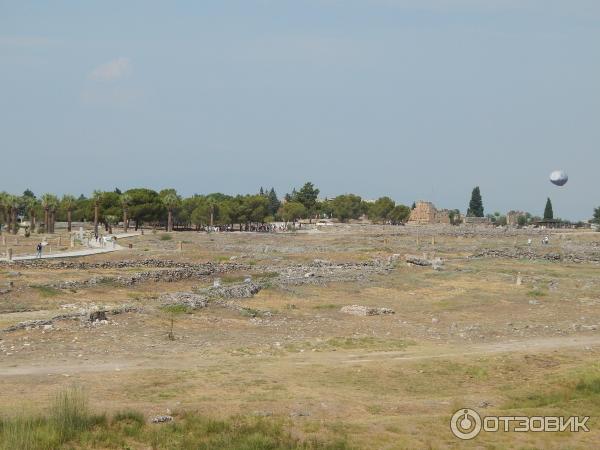 Looking at these columns, it gets a little uncomfortable. I hope that the reliability of these structures is checked by experts, so that tourists do not fall unexpectedly brick on his head. 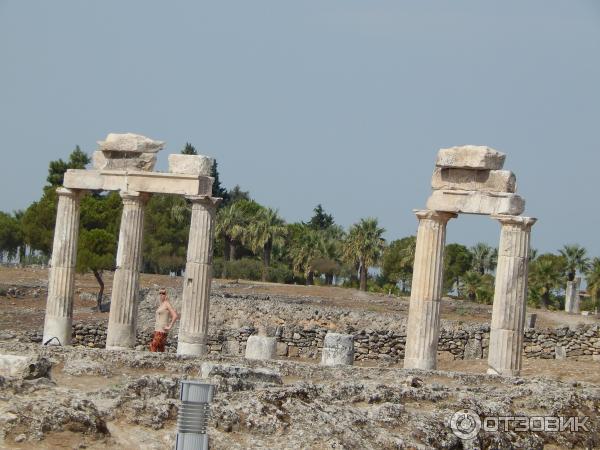 Hierapolis was founded by the Greeks in 190 BC. In 1354 the city was destroyed by a major earthquake. 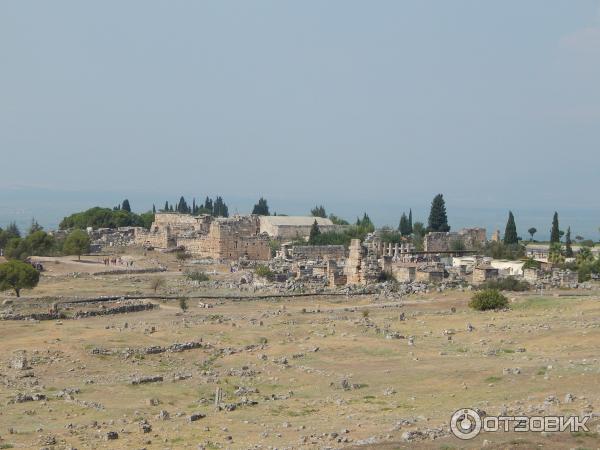 The most unique object of Hierapolis is theater. But of course it has not survived in this form from ancient times, but was restored at the end of the 20th century. 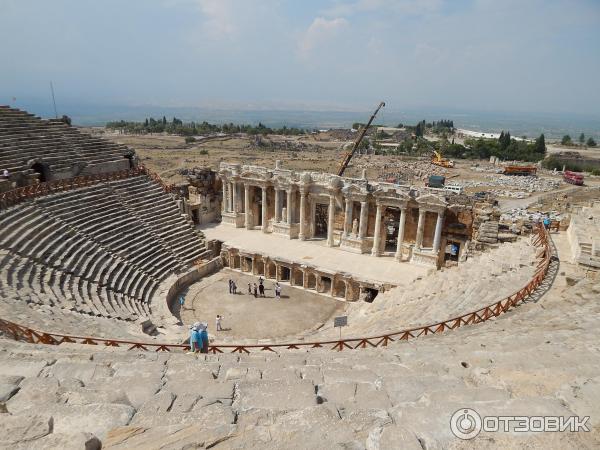 The stage has been reconstructed in its original form with columns and statues. 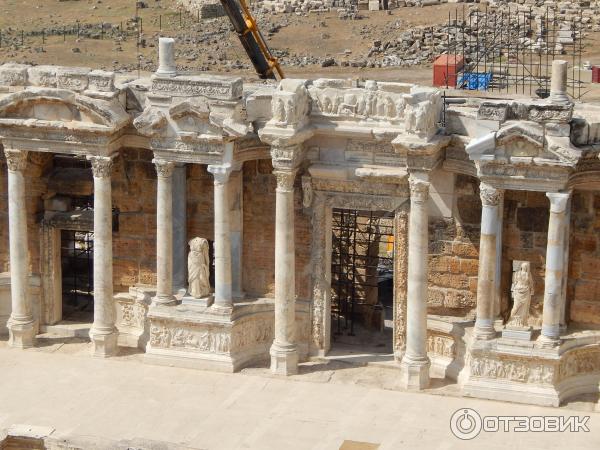 Currently, the archaeological and restoration works are actively continuing. 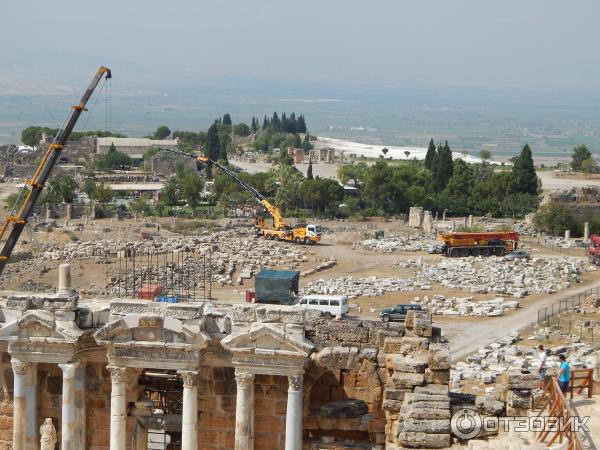 But here is Pammukkale, which means “cotton castle” in Turkish. We will get acquainted with the word “travertine” new to many people – it is a unique natural structure – white terraces formed on the mountainside as a result of deposition of salts from calcium-saturated springs. 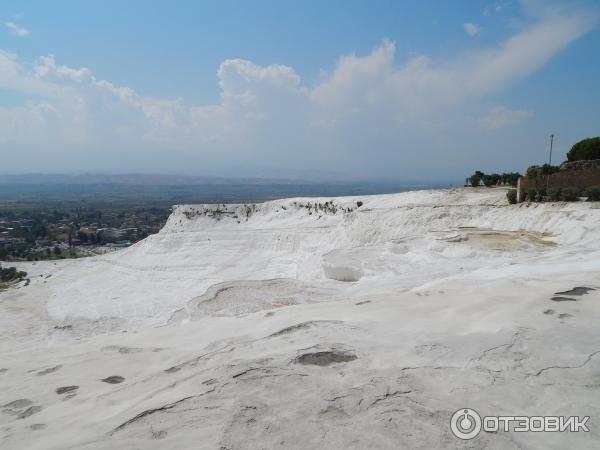 This is why we went – to wander barefoot on the white stones of Pamukkale, to get our feet wet in warm pools and to admire this natural wonder. You can only walk without shoes. Most of the travertine is very fragile and closed to tourists. 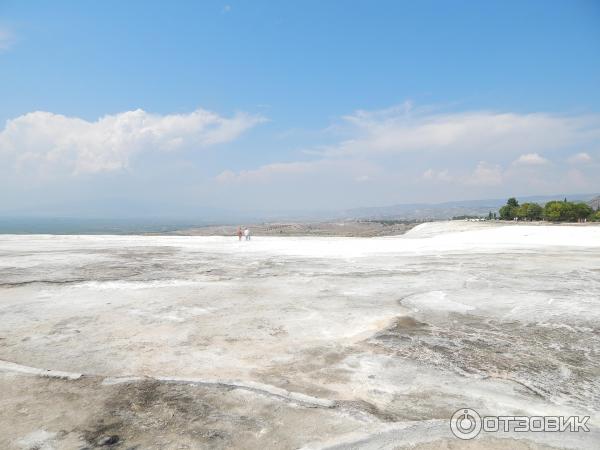 There are a lot of tourists in the season, all trying to take pictures, and sometimes it is interesting to take pictures of the travelers themselves. Looking at this amazing photo, I’m never tired to marvel at Mother Nature: what contrasts she creates, how multifaceted and unique her creations! 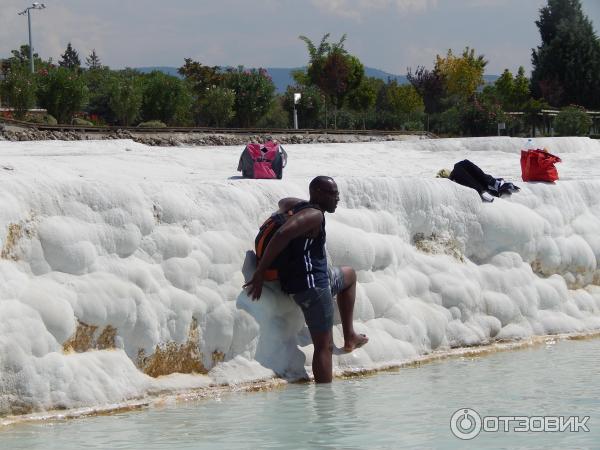 Apparently, this fellow is not very afraid of the sun, but we had to wrap up well in a pareo, so as not to get burnt.

The views from the top of the town and the pools are amazing. 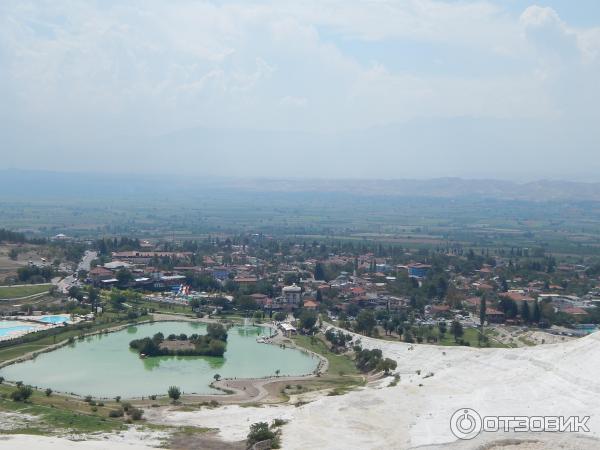 During the tour offer to buy tickets to visit the pool Cleopatra, it costs about 16-18 dollars. The pool was built in ancient times on the thermal spring, the water is very warm – about 40 degrees, it tastes like “Narzan”. There is no way to cool down. 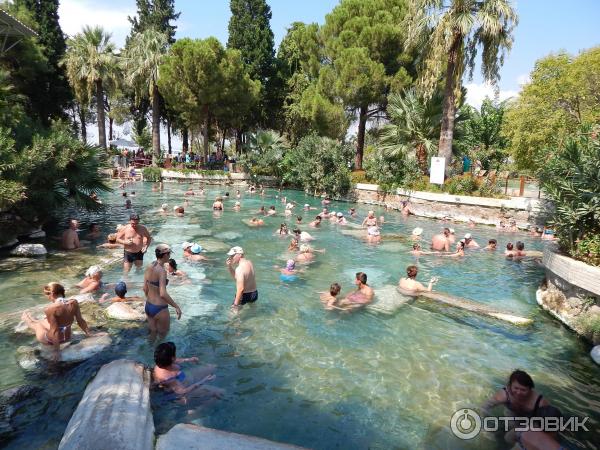 Be prepared for a large number of people and underwater rocks (literally). The bottom is decorated with antique debris, which you can hurt yourself. 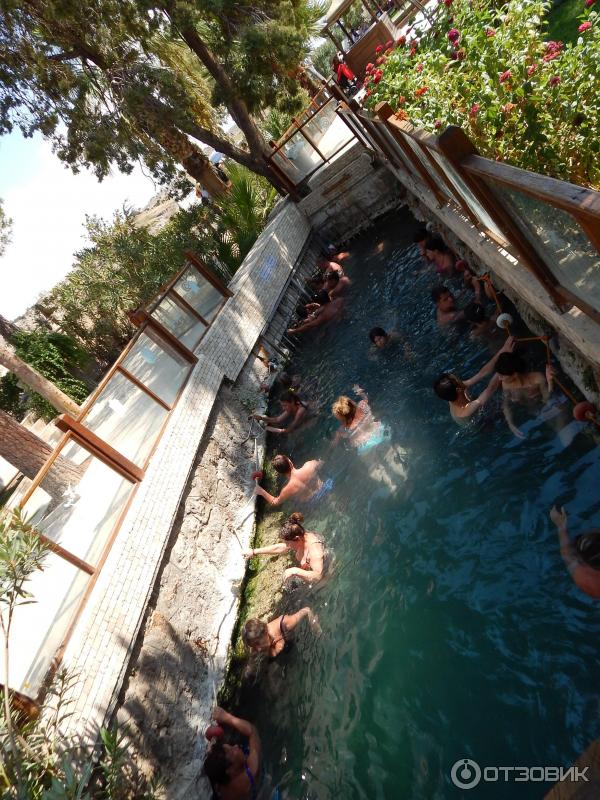 Let’s take one last look at the white-washed wonder, and despite the exhausting heat, we will remember the beauty of the “cotton castle” forever.