How do I get to Park Guell by public transportation?

Park Guell is located a bit far from the center of Barcelona.

There are 4 ways to get to the park by public transportation:

Let’s look at all the options in detail: with timetables, diagrams and stops. 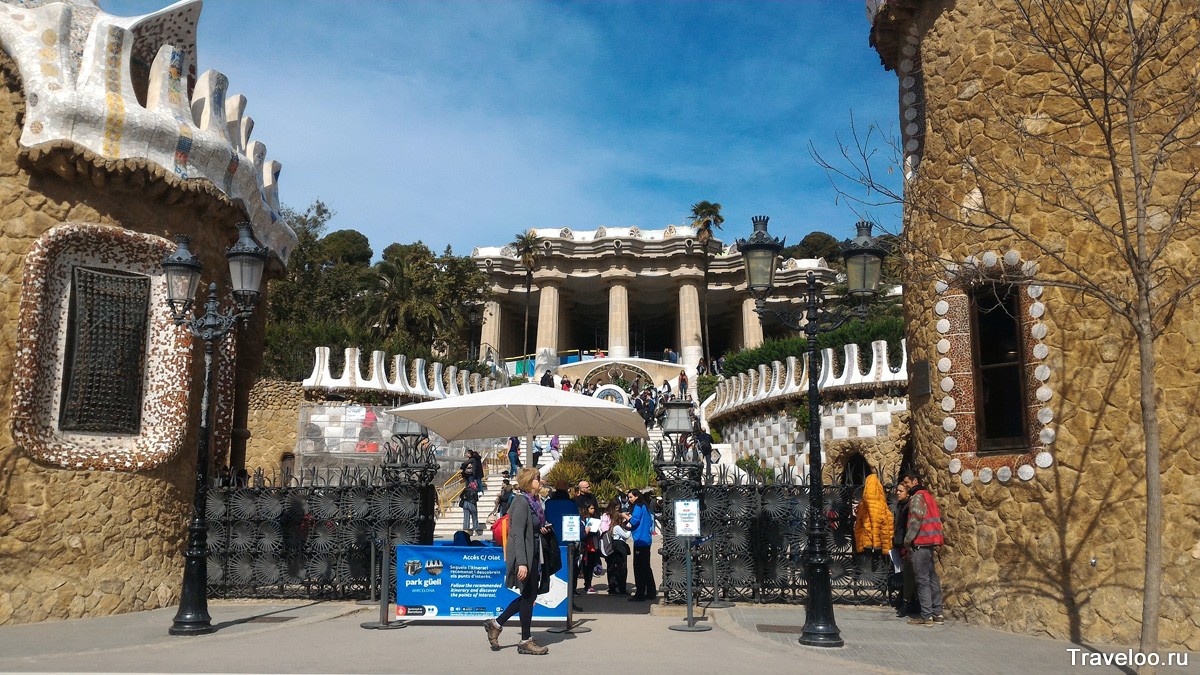 How to get to Park Guell by Metro

You can take the L3 green metro line to Park Guell. The entrance to the park is approximately equidistant from the Vallcarca and Lesseps stations. From both stations walk about 15 minutes.

Below is the route from the metro stations.

From the Vallcarca metro stop, walk 15 minutes. Exit the subway and see in front a crosswalk and behind it a staircase to the park. If you see all of this, you need to walk past the park as you go. We didn’t see any landmarks to lean on, so we just count the traffic lights. The first traffic light (the one at the subway station – does not count) skip, on the second need to turn left (cross the road) and go straight, without turning anywhere.

If you count to two correctly, the path should lead you to the escalators, which will facilitate your ascent to the park. 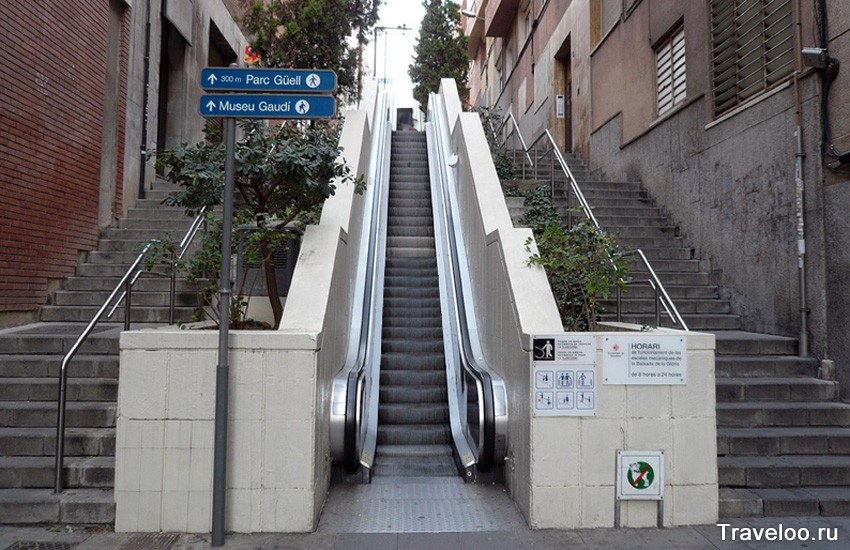 Escalators from the Metro Vallcarca and Lesseps to Parque Guell

There are signs after the escalators.

From the Lesseps station:

From the Lesseps metro stop, walk 15 to 20 minutes. Exit the subway, walk 10 meters ahead, turn right and cross the street at the traffic light.

At the fifth traffic light turn right. For guidance there will be an escalator in the distance. There may be a red sign on the pole indicating the Vallcarca subway station.

If you see a Subaru car dealership on your right, you have already passed the right turn – you need to go back a bit.

After the escalators, the signs will lead you to the entrance to the park.

For more details about Barcelona’s metro, metro schemes and maps, see our article.

How to get to Park Guell by bus

Bus stops of the H6 (all pictures are enlarged by a mouse click). 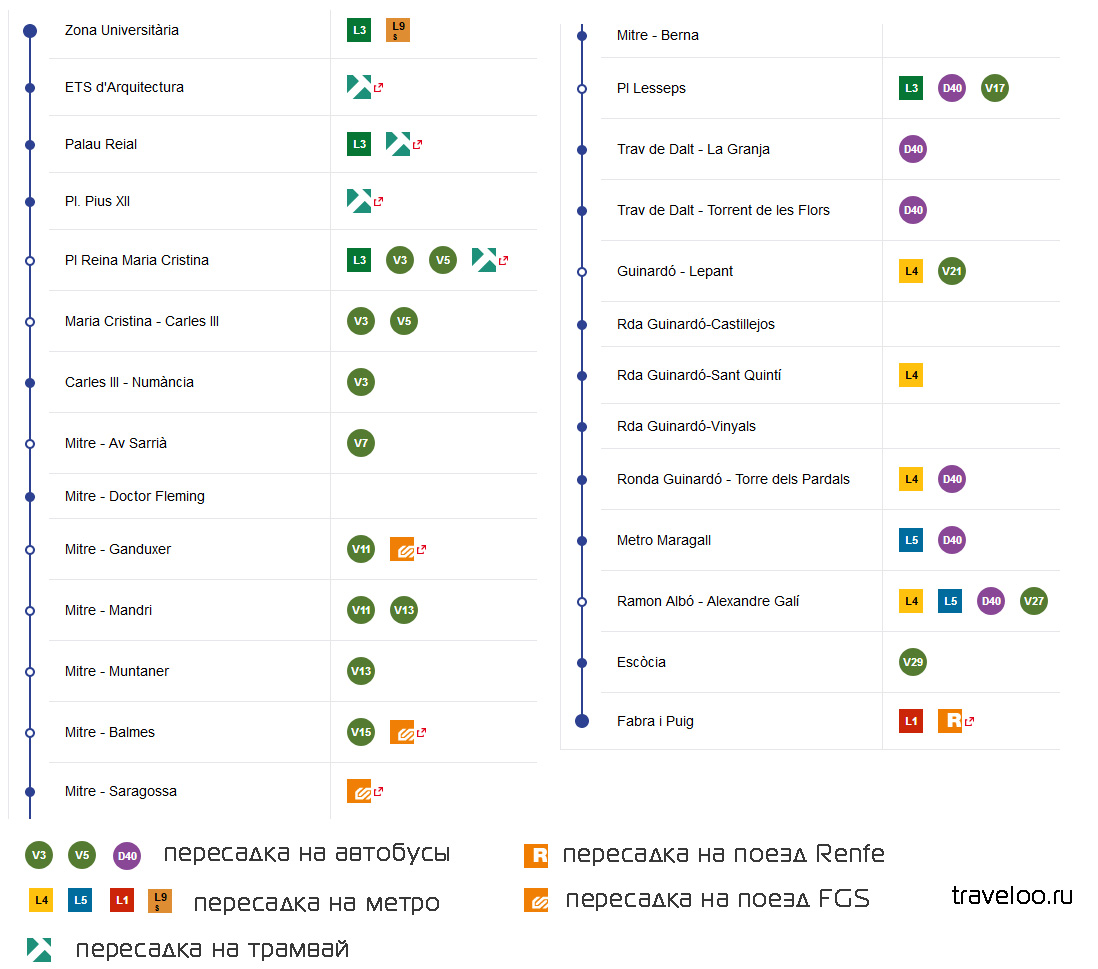 The bus H6 runs according to the following schedule:

Get off at the Ctra del Carmel – Parc Güell stop. 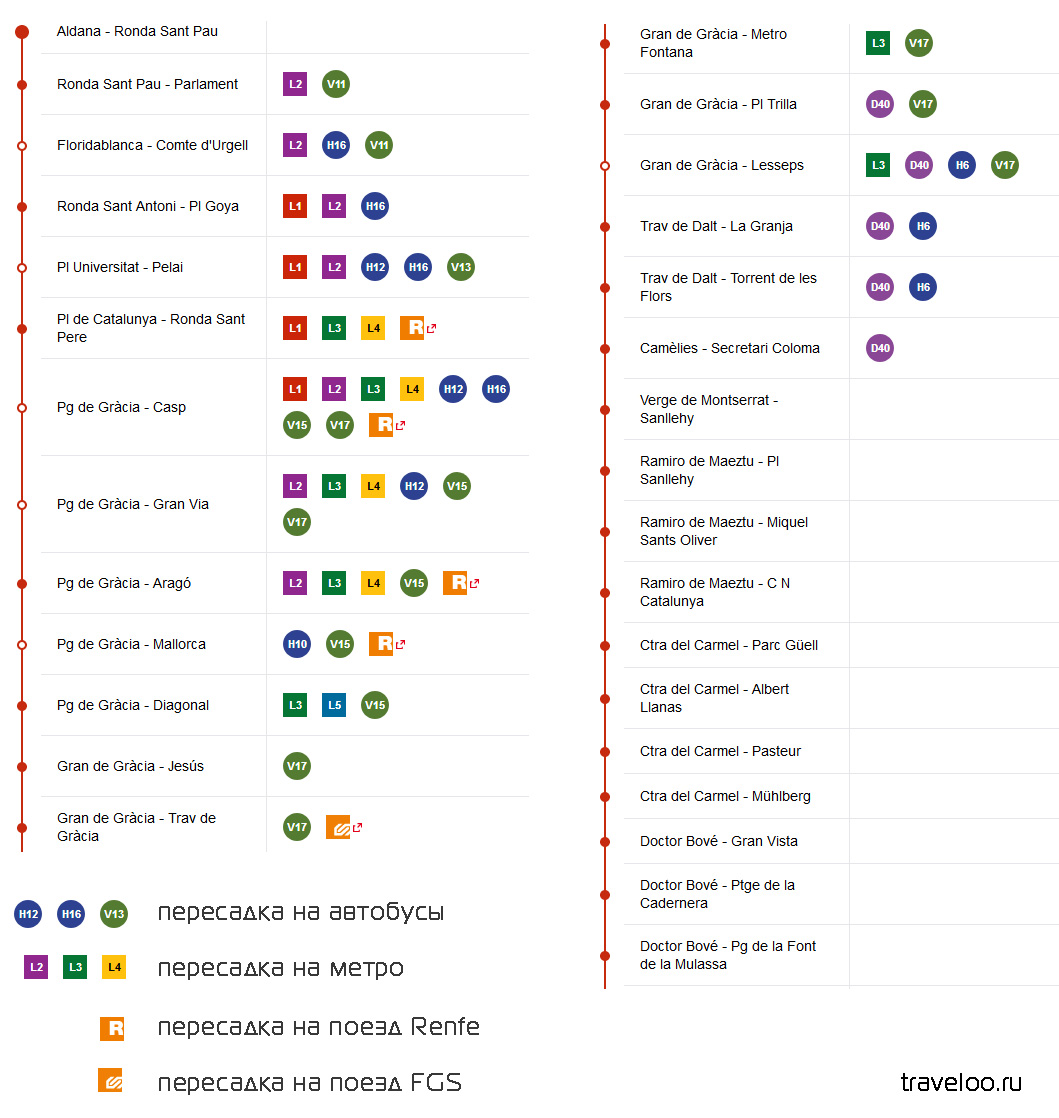 Bus 24 has the following timetable 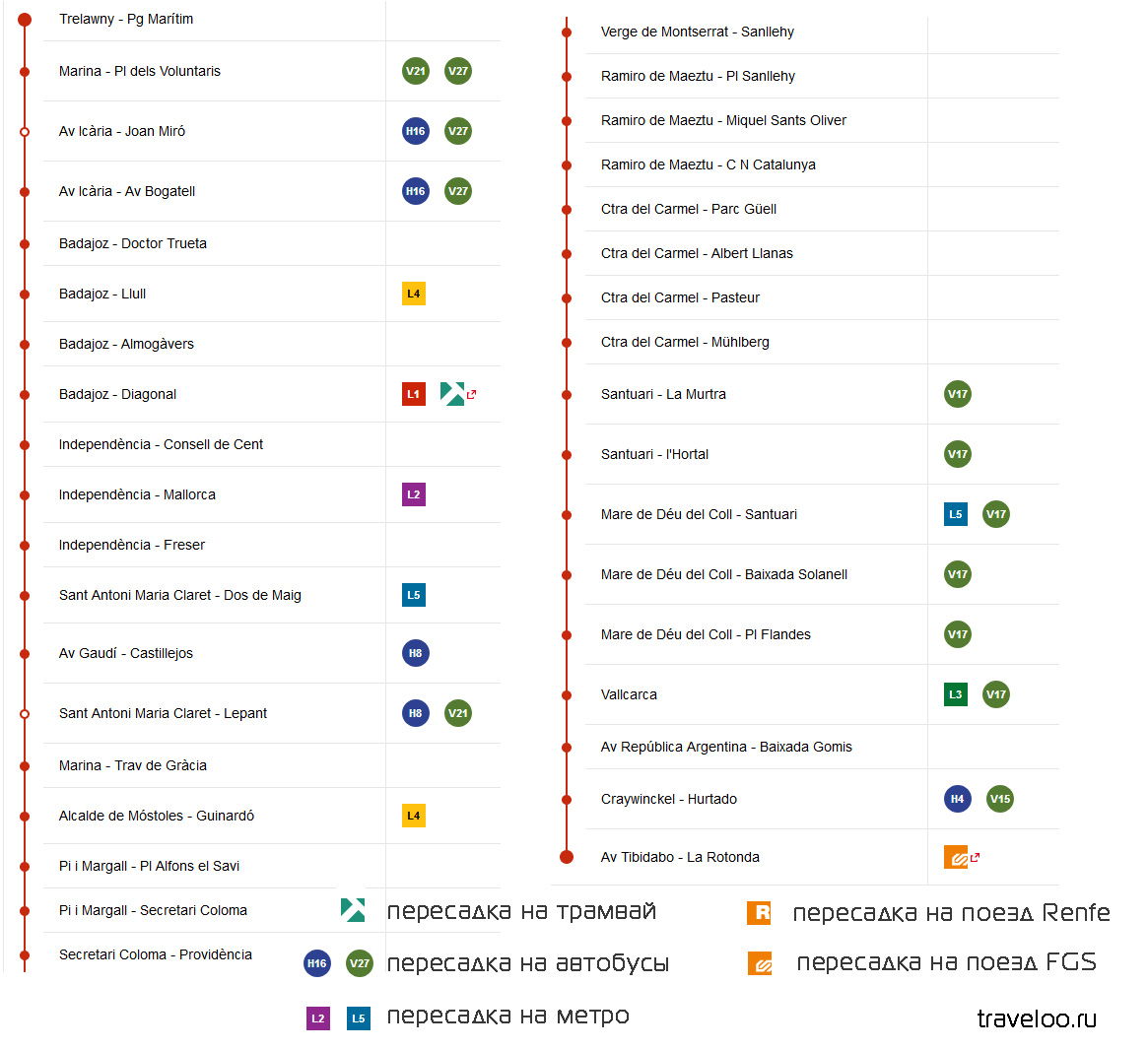 Bus number 92 runs according to the following timetable:

Stops of the H40 bus 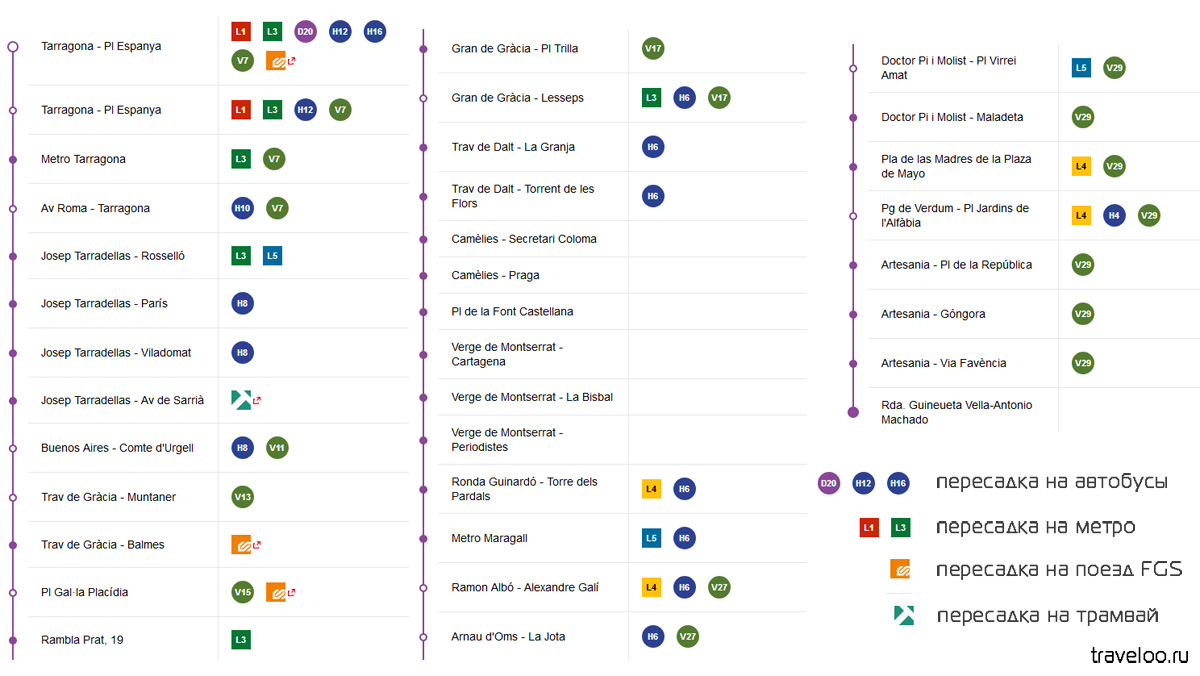 The H40 bus runs according to the following schedule:

You can get on the mini bus number 116 at the Joanic metro station – line 4, yellow color.

The advantage of the route: The bus stops right in front of the entrance to Park Guell.

Minus of the route: back from the park, the bus stops at the Lesseps subway station – line 3, green. 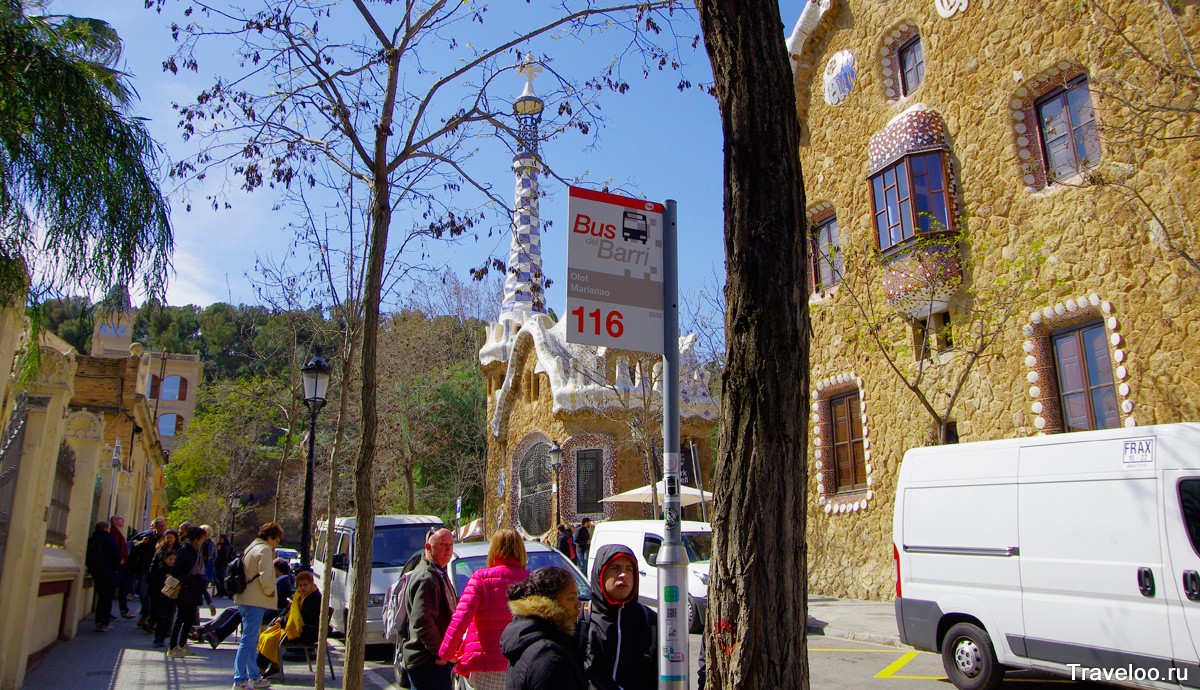 Bus 116 stops at the entrance to the park

Bus route 116 to Park Guell with all stops 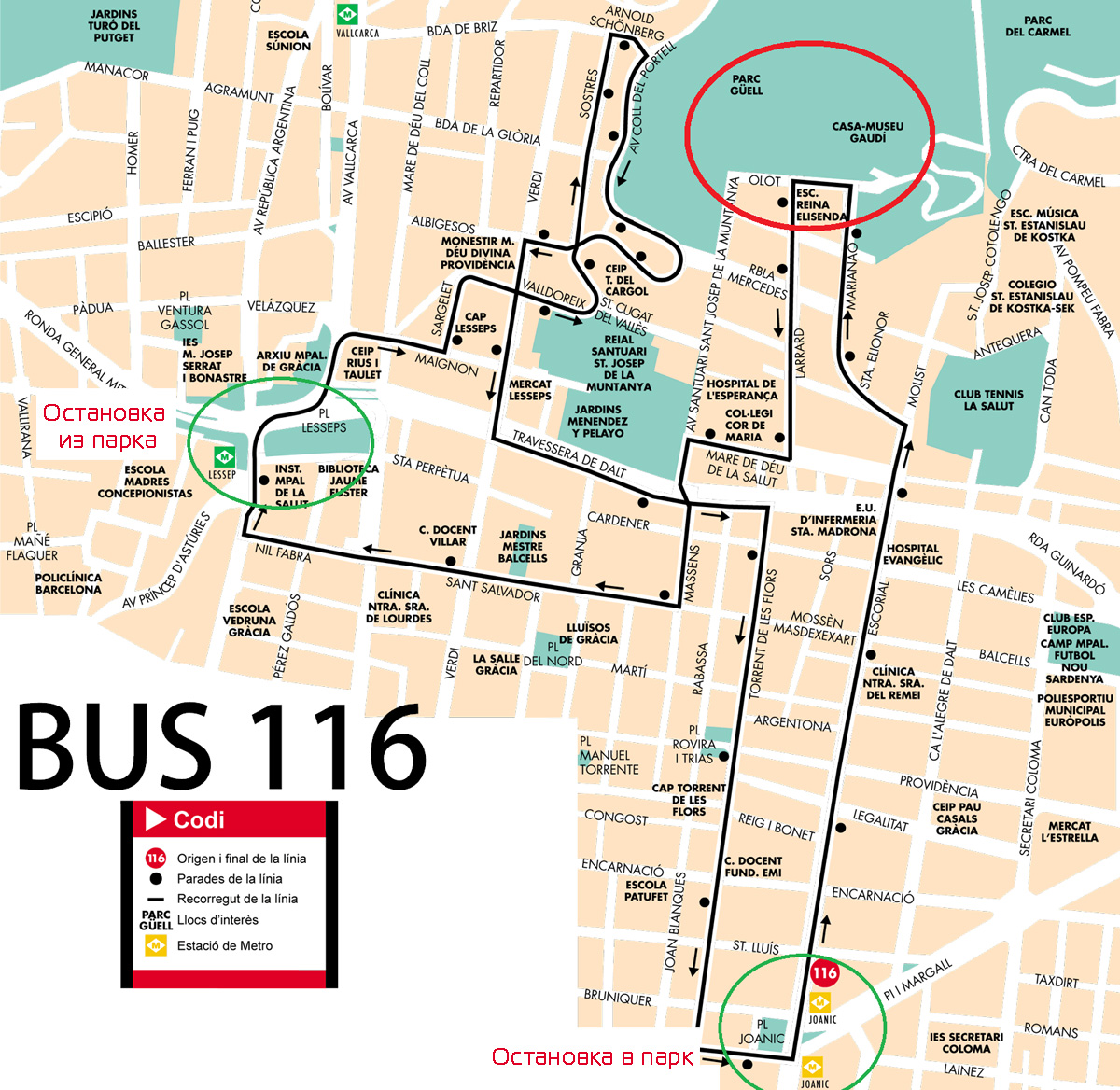 If you go by Bus Turístic, you need the “Red” route.

The Barcelona City Tour has the “Green” (East) route.

Reach the Parc Guell stop. Then you have to go along the bus route and at the second traffic light (the first one was right near the bus stop) turn right and at the next crossroads turn left (you get to the street, which is parallel to the road you came by the tourist bus) and go straight ahead. Turn right at number 57 at the sign for C.Escorial 187/202.

At the next fork you turn left and at the next one keep right. Continue straight ahead and you will come to the park.

Of all the transportation options we chose the bus (tourist bus), because we decided to combine the trip by bus with a visit to the Park Guell.

A 1-day ticket from Bas Touristica and City Tour costs 30 euros (from the bus) and 27 euros on the official website. Read more about the tourist buses and their routes here. 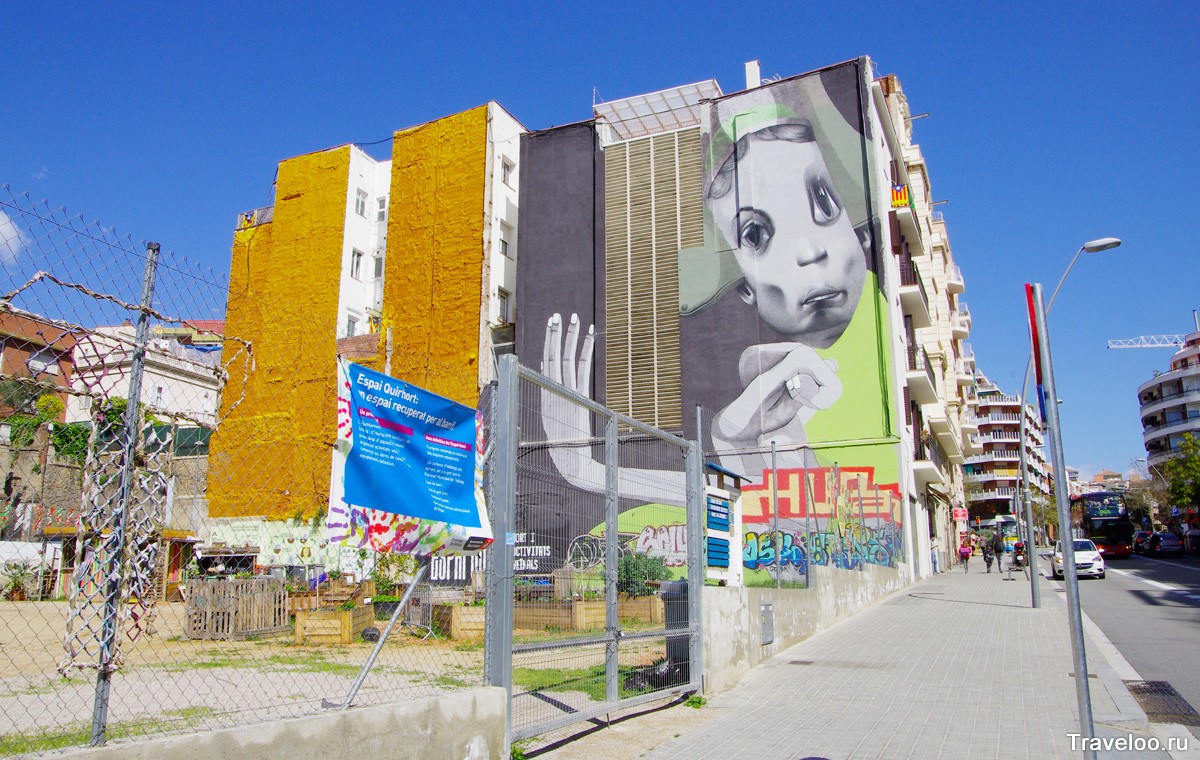 The street to Park Guell is quite narrow and goes uphill all the time.

And then for clarity we attach the map with routes, how to get on foot from the subway and buses to the park 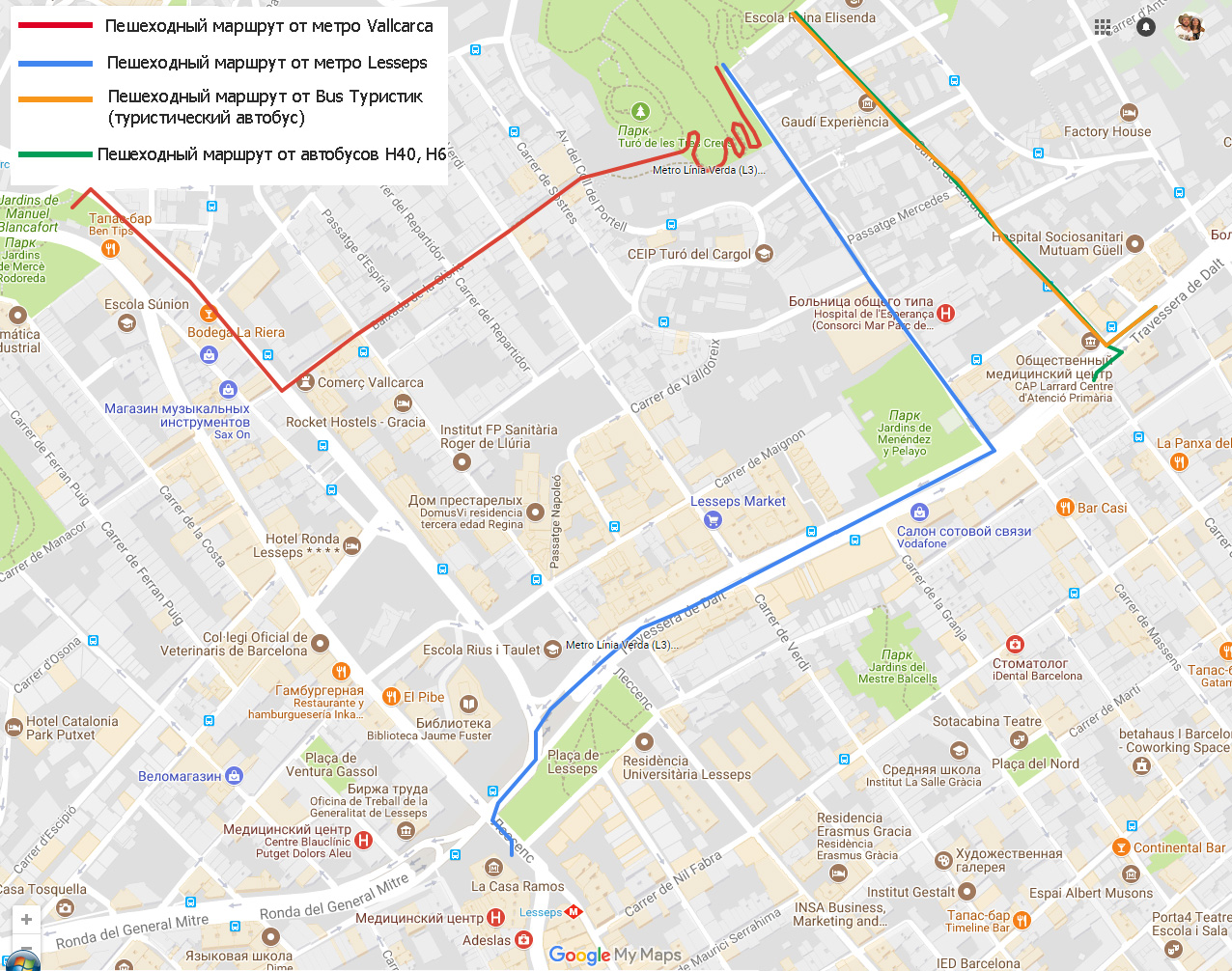 Fares for the metro and buses to Park Guell

Fares on all buses are the same.

A travel card from the driver costs 2.20 euros.

The card for 10 trips will cost you 10 euros and 20 cents. The card works a bundle: metro + bus + streetcar. If you change from subway to bus or streetcar during 1h 15 min, the trip costs 1 euro per person.

Read more about the subway and the T10 card in our article.

How to get a visa to Spain

When going to Spain, it’s necessary to take care of getting a Schengen visa in advance, if you don’t have it yet. How to get it is described in this article as an instruction. 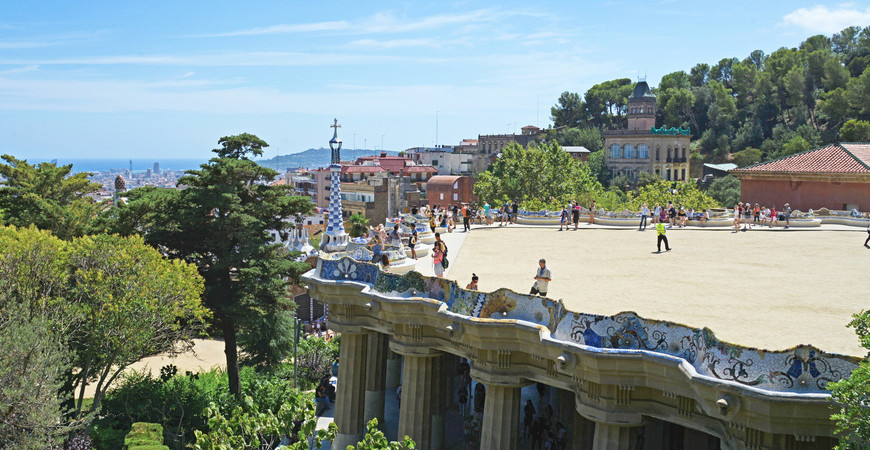 Park Guell, one of the main attractions of Barcelona, is located on the Carmel Hill in the upper part of the city and includes a system of gardens and architectural elements and a residential area.

The vast park was conceived by the Catalan industrialist and philanthropist Eusebi Güell in the style of the English garden-city concept, an organic place for living and relaxing. To realize his idea Güell acquired 15 hectares of land, divided into 62 plots for future mansions. However, the inhabitants of Barcelona did not show any interest in the villas, and the implementation of the garden city idea eventually failed, only 3 houses were built. As a result of economic failures, the heirs were forced to sell the park to the mayor’s office, which made it a city asset.

Architect Antonio Gaudi, with whom Guell had worked since 1884, got involved in the creation of the park immediately, and the work continued until 1914. And now it is Gaudí’s architectural extravagances that make the park so attractive to citizens and tourists.

The central entrance to the park – its most famous “postcard” view – is marked by two “gingerbread houses” with fanciful decorations. Then – the front terrace and fountains, the Hall of a Hundred Columns and, finally, the upper terrace above the hall – the compositional center of the park ensemble, here there is a long curved bench in the form of a sea serpent. From the main square depart walking alleys, called “Bird’s Nest” – after the similarity of Gaudi’s stone decoration, protruding on the slopes of the hill. Unique decorations of the park are sculptural details, decor of ceramic tiles and glass, mosaics.

The main attractions in Park Guell are the Gaudí House Museum, located in the mansion where the architect lived.

Park Guell in Barcelona is currently a UNESCO World Heritage Site (Gaudí’s Works) and is a monument of national importance. By August 2020, the restoration of the Plaza de la Nature and the Bench, the Hypostilla Exhibition Hall, the Baix viaduct and the Font Sarva, which was not accessible before, had been completed.

There are several types of tickets available for visitors to the park. The paid area is the Monumental: it is the main entrance, the terrace and the areas with mosaics.

Separate tickets must be purchased for the Gaudí House Museum.

Only the Monumental route is chargeable to tourists and only at certain hours. Accordingly, the rest of the Park Guell is free access, and you can visit the Monumental for free in the early morning (enter before 8 am – before the official opening) or evening (after 6:15 pm, but it gets dark quickly). The sights and mosaics can also be seen from the outside – from the permanently free part of the park.

At any time, you can visit the entire Güell Park for free:

The main entrance of Park Guell, as seen from rue d’Olot – panorama on Google Maps

How to get to Park Guell in Barcelona

Park Guell is located on Calle d’Olot. There are three main entrances: the main one is on Calle de Larrard / d’Olot, the second one is on the side of Del Carmel, núm. 23 (where the tour buses are parked), and the third entrance is from the Passatge de Sant Josep de la Muntanya.

Buses 24 and 92 go to the Carretera del Carmel-Park Güell stop at the second entrance.

There are also special tourist buses around Barcelona (Bus Turístic, Barcelona City Tour), which stop at Travessera de Dalt, a 10-minute walk from the main entrance.

The subway to Park Guell is about a 15-minute walk. Go to the Lesseps station (or to Vallcarca) of the green line (L3), then enter through Passatge de Sant Josep de la Muntanya, where there are escalators.

UNESCO World Heritage 0
The Loire Valley and its Chateaux, France Château de Chambord The castles of the