The Passage du Goût – a road that sinks twice a day

The attraction of this place is that twice a day the road goes completely under water. The water layer is usually from 1 to 4 meters. The road can be used not more than 2 hours a day.

The Passage du Goût lies in the Bay of Bourneuf and connects the island of Noirmoutier with Beauvoir-sur-Mer in the Vendée department of northwestern France. 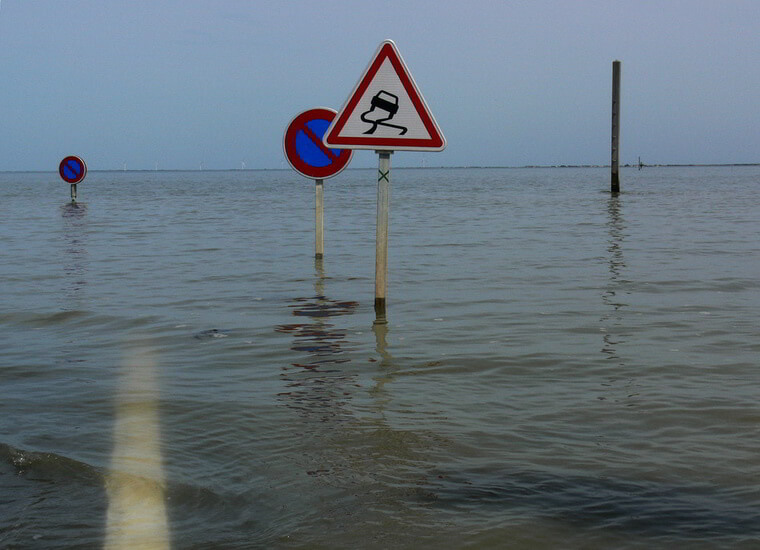 Where the name comes from.

Everything is clear with the passage. It is, in French, simply a road or passage.

But that’s where the name Gois comes from? Some say it means ford. Others say that “Gois” comes from the Latin word “guazzare”, which means “lying in the mud” or “walking with wet feet”. 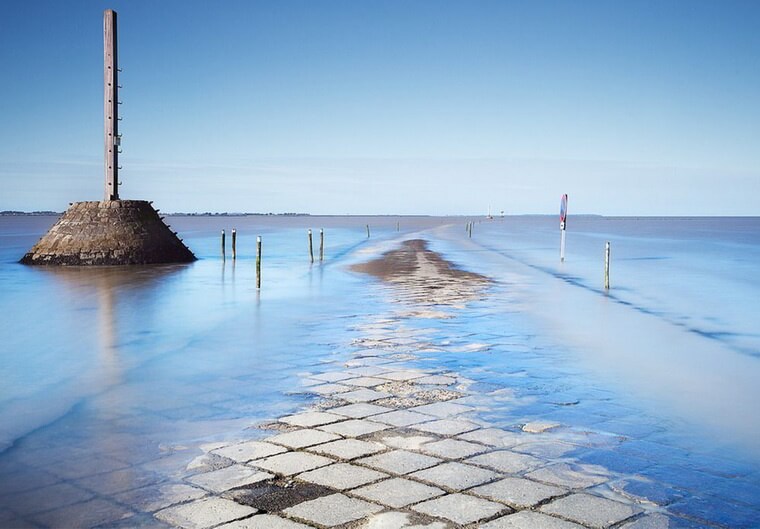 The reason for the formation of the road

Burnef Bay is interesting because it contains two opposing currents. One from the north and one from the south. For thousands of years, these currents have collided in the bay. This has resulted in the formation of sandbanks.

In ancient times, these shoals were constantly moving around the bay. By the 18th century, the approximate direction of the future Passage du Goût road had taken shape. And at the end of the 19th century, the shoals stopped shifting and the modern route from the island to the mainland emerged.

Before that, people reached the island of Noirmoutier only by boat.

The road first appeared on geographical maps in 1701. Although the first mention of it dates back to 843.

READ
Lerdahl Tunnel. The longest road tunnel in the world.

There is an interesting story associated with it. During the medieval wars, the island held prisoners (according to other reports, prisoners). But one day their numbers dwindled. It turned out that some of the prisoners … simply left the island. Although, before that, it was believed that it was impossible to get from here to the mainland without a boat.

When the causes of this escape were discovered, it turned out that there was a way across the bank and that it was possible to reach the opposite shore.

Since 1840, the road is already popular with local residents. It was strengthened and paved with cobblestones.

From 1935 to 1939 the road was significantly widened. After that, two cars could easily pass each other on it. Naturally, the work was carried out only at low tide and twice a day.

In 1971, an ordinary bridge to the island of Noirmoutier was built. Despite the fact that to get to the island is now possible without any risk, the extreme road is still popular. It can only be used at low tide.

There are similar roads in the world, but the Passage du Goa far exceeds them in length. The total length of the road is 4125 meters. 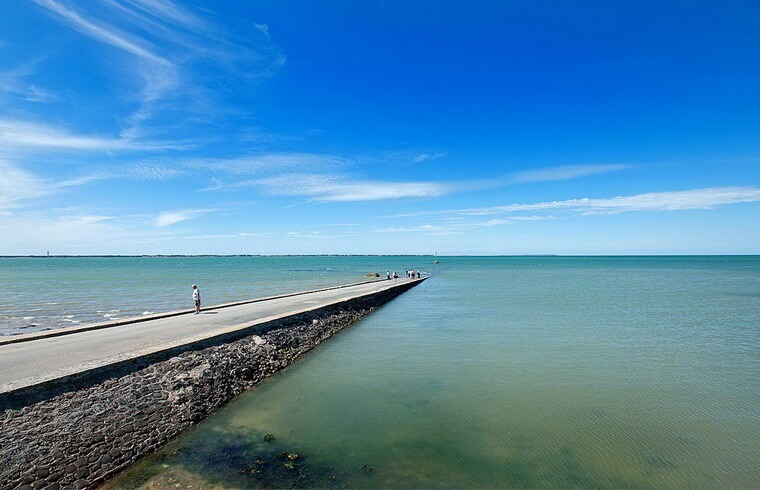 The risks of the Passage du Goût road

Since the road is under water 2 times a day, of course, this is what the main risks are related to. It is very important to keep an eye on the tide and know the timing of the tide. Since the 1830s, the approaches to the Passage du Goût road have been showing the tide schedule. 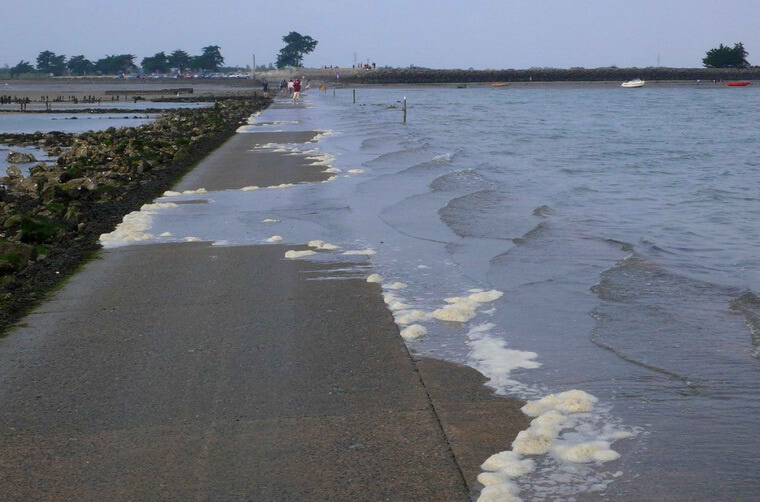 The beginning of the tide on the Passage du Goût road

Keep in mind that the tides in this area can be very swift.

Don’t forget the fog. It’s pretty dangerous, too. It’s easy to lose your bearings in the fog and be caught off guard by the tide. There are now small posts along the edges of the road to guide you. 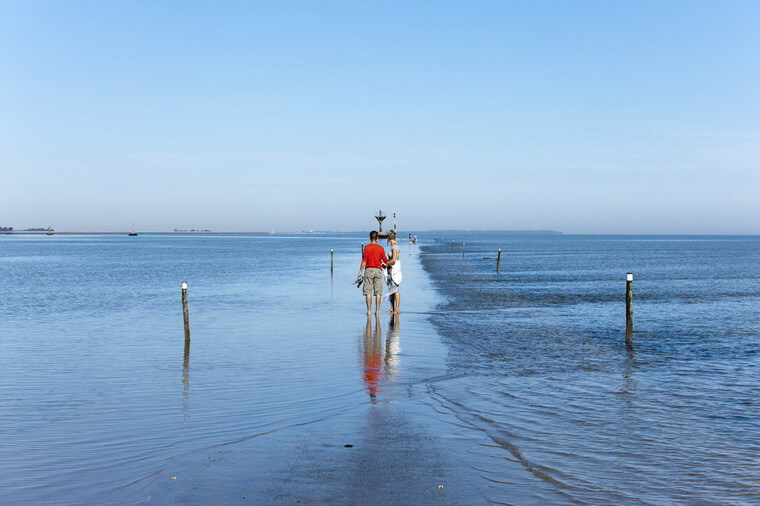 Many accidents have been reported on the Passage du Goût road in the past. Therefore, lifeguard towers have been built all along the way. No, there are no lifeguards sitting on it. They are for gaping people. At high tide, you can climb these towers and wait it out, or ask for help. But if you happen to get stuck here in a car, you are unlikely to be able to save it. 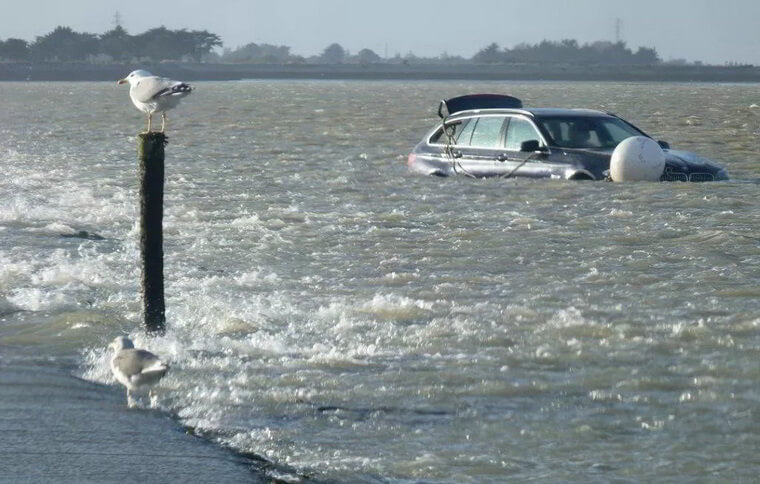 There are six towers in total. They are located approximately every 500 meters. 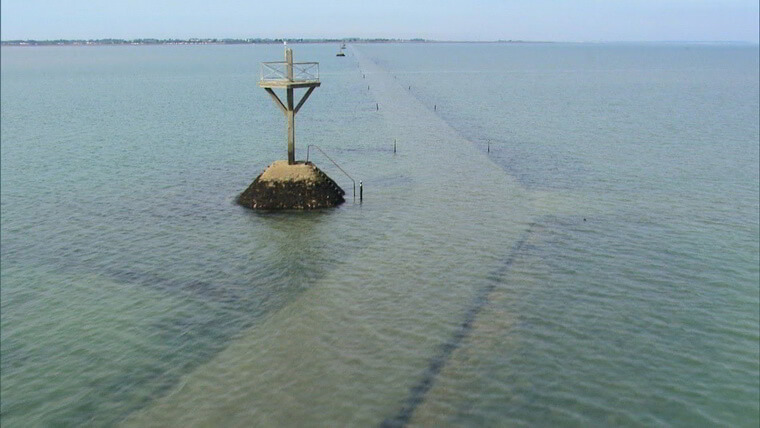 Despite the warning signs, every year people get trapped in the Passage du Goût road. Fortunately, it usually passes without tragedy now.

In 1993 and 1999, the second stages of the Tour de France were held here. And in 1999, many of the favorites of the race fell on the slippery road on this stage.

In 2011, the Passage du Goût was the starting point of the first stage of this cycling race. 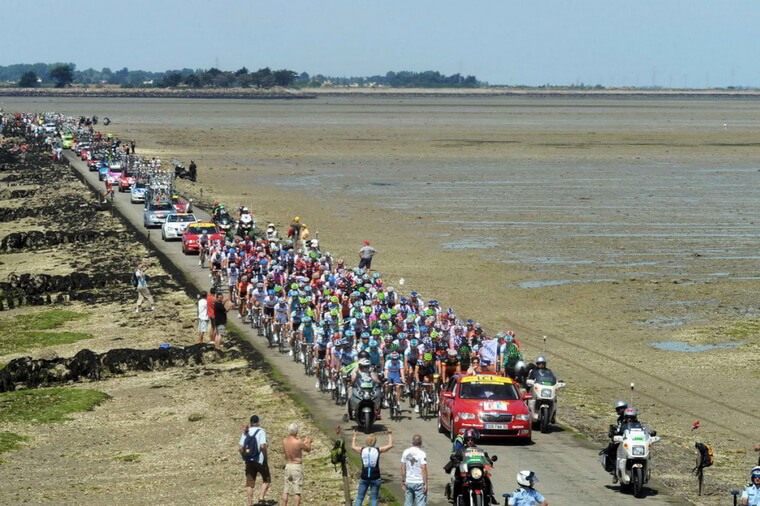 Every year since June 20, 1987, athletes race here. They start with the tide. The task of the runners is to reach the finish line without getting their feet wet. But some participants run up to their knees in water.

The Passage du Goût – an amazing road in France

On the Atlantic coast of France there is a place of extraordinary beauty – the road Passage du Gois, laid out on the bottom of the Bay of Bourgneuf, which connects the mainland (France) with the island of Noirmoutier (Noirmoutier).

The natural passage between the island and the mainland, protruding at low tide, was first mentioned on maps in 1701, but it existed before that. It was not until 1840 that a cobblestone road was built over it, and at a later date special slabs were added, so that the road is now used by cars as well as motorcycles and bicycles.

The Passage du Goût was formed because of the destruction of the plateau that contributed to the formation of the Bay of Bourneuf. Thousands of years ago, two currents collided in this area and created sandbanks that were constantly shifting, then settled in one place and formed a stable structure, on which people later put cobbles (cobblestone paving) to prevent erosion. Well, now almost the entire road is paved with asphalt.

It is not the only road of this type, but its uniqueness lies in the distance. The Passage du Gois is 4125 meters long. Depending on how much water arrives, the road is covered by the ocean to a depth of 1.3 to 4 meters. The road opens 2 times a day, tidal information is displayed on a scoreboard in front of the road entrance on both sides of Passage du Gois. The road is open 1.5 hours before and after low tide. During this interval, all who wish may safely drive or walk the road without problems (in good weather conditions). The main thing is that there is no fog.

In 1971, a bridge was built connecting the island of Noirmoutier to the mainland, so now there is no need to wait for low tide, and you can safely drive over the bridge. However, the number of people wishing to drive on such an unusual road does not decrease.

What are the peculiarities of the Passage du Gois

This road emerges from under the water twice a day at low tide. There are websites that show the dates of low tides and high tides for each day, there is information about what time it is best to go and when the road closes. That is, for locals and travelers who want to take this road, there is all the information you need. However, some particularly clever individuals manage not to take such necessary data into account and because of this get into very unpleasant situations.

Of course, it is clear that there is a certain risk of being left on the road and be washed away, but the risk is negligible and such a situation may arise as a result of stupidity of the tourists. The fact is that at the entrance to the road on both sides there are signs with all the necessary information and there are barriers, the passage is closed at certain times. But there have been times when people have driven in, stood in the middle of the road and wandered to the bottom of the ocean, and then the water starts to arrive. The water doesn’t arrive evenly, if it’s already gone, there’s minimal chance of getting out. So the car would get swept into the ocean and people would be rescued in the towers.

The towers can be talked about separately. Along the whole length of the road at a certain distance from each other there are lifeguard towers (at a distance of 500 meters from each other). They are called “parrot masts” (parrot roosts) – mâts de perroquets. Today there are 9 towers and they are well visible during the day and well lit at night, allowing people to find shelter in case of trouble. They come in two versions: a simple tower without a platform, you just have to hang on it as a ladder and full-fledged tower with a platform on which a few people can climb and comfortably accommodate there. But comfort, of course, is relative. The car will be taken by the water and it will go to the ocean, most likely it will be taken out a little later by the rescue team, but nevertheless, there is nothing good for the equipment in the sea salt water. And the passengers will be waiting for a patrol so that they can be taken off and moved to a safe distance. Such is the case. And despite all the signs and all the information, one car a year or two is still sinking on that road. Lately, no fatalities, and that’s a good thing.