The Patom crater was discovered very recently from a historical point of view. In 1949, a Russian geologist Vadim Viktorovich Kolpakov found a huge mound of limestone rocks in the northern part of the Irkutsk region. This mysterious geological formation looks out of place and therefore rather surprising against the background of the surrounding Siberian taiga.

Where is the Patom crater?

The crater is located in southeastern Siberia, about 210 km straight or 360 km by road northeast of Bodaibo district center, on a gentle slope of one of the hills of the Patom Highlands. The nearest settlement with the name Perevoz is 40 km to the south.

The crater consists mostly of limestone debris, but you can also find specks of quartz, sandstone, shale and feldspar.

The volume of the geological structure of about 230000-250000 cubic meters, and the mass of the order of 1 million tons. 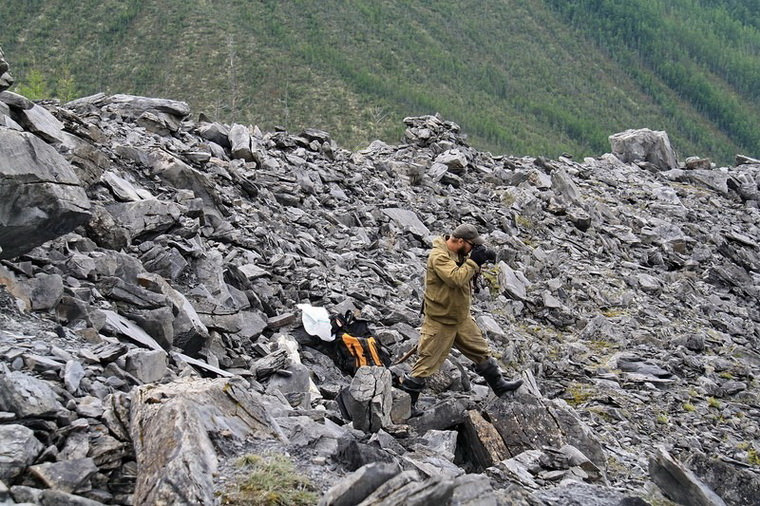 Several names of the crater

The crater is called Patomsky after the name of the plateau on which it is located, but locals know it as the “Nest of the Fire Eagle”.

In scientific circles, the crater is called “Kolpakov’s Cone,” naturally after the name of the discoverer. It is also known as the Jabuldin Crater or Javaldin Crater.

Since the discovery of the crater there have been several theories of its formation. Many expeditions have visited the area.

At first it was believed that the crater was left by a meteorite.

Some researchers connect the appearance of the Patom crater with the Tunguska meteorite, whose remains, by the way, have not been found. But this crater does not look like an ordinary meteorite trace. In addition absolutely no traces of extraterrestrial origin were found.

And you want to see a meteorite, from which even a trace was not left, not to mention the crater it left? Then read about the Goba meteorite in Namibia.

Scientists later speculated that it was either an incipient volcano or a consequence of volcanic activity, but again, no trace of volcanic material was found.

By counting the rings of trees growing on the crater, its approximate age was calculated. It was not less than 300 years old. It is noteworthy that the trees near the crater have evidence of accelerated growth. Like in the Chernobyl forests after the famous nuclear accident. This gave rise to versions of a secret nuclear plant or a UFO crash site, which may have had a nuclear reactor on board. But no evidence was found. There is no asteroid, no meteorite debris, no metal in the bowels of the crater.

Recent research has formed the basis of the most likely explanation of its appearance and age. Most likely, it is a gas volcano. The mound could have formed during an underground release of gases, such as hydrogen. The abundant heat release that accompanied this gas burst caused changes in the tree rings, which were initially interpreted as abnormally rapid growth.

Although it is not known reliably how the Patom Crater appeared, most geologists agree that it is of quite terrestrial origin. 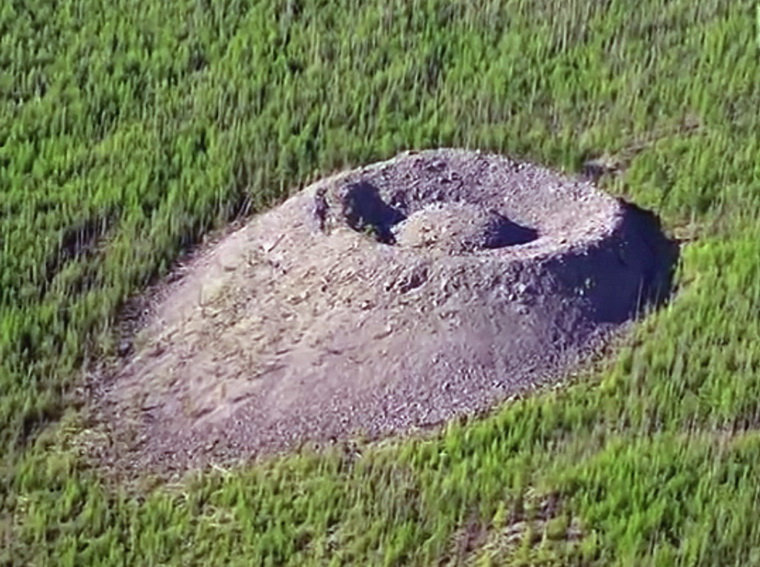 How old is the Patom crater

The mysteries of the Patom crater have not yet been solved. Scientists argue even about its age. The original estimate of 300 years old has been questioned. Now they believe that the crater began to form about 500 years ago. This is confirmed by the results of various experiments and analyses. According to the theory, in the Middle Ages, during active ground movements in the area there was a massive fall of trees. As a result, a new generation of larch trees up to 480 years old appeared. Trees up to 300 years old were found along the outer part of the crater.

Due to the remoteness of the Patom crater, it is unlikely to be of interest to tourists. But for historians and geologists it is an extremely important object for research.

The Patom crater, also known as the “Nest of the Fire Eagle” is located in the north of the Irkutsk region. This amazing place was discovered in 1949, but its study began only in 1963 by a complex expedition of scientists from Tomsk and Novokuznetsk.

Initially, it was assumed that the crater was of volcanic origin, but geologists found no traces of lava and ash in soil samples taken around the crater. But soil analysis revealed an abnormally high magnesium content. The possible cause of this oddity was strongly magnetic plates curved with a silvery sheen, quite reminiscent of artificial formations. It was then that the first suggestion appeared that these could be fragments of the coating of an unknown aircraft, as such alloys are characterized by increased strength.

Dendrochronological studies conducted by doctor of biological sciences Victor Voronin, head of the laboratory of Siberian Institute of Plant Physiology and Biochemistry of Siberian Branch of Russian Academy of Sciences, give grounds to assume that the cause of the crater formation could be the fall of an artificial object.

Elemental analysis of annual rings of trees growing in the area showed that since 1842 they greatly increased the content of radioactive elements, but after a few decades, the radiation level has gradually decreased. Voronin notes:

“As the temperature of the ground rose, the roots of the trees could absorb more radioactive material. In 1842, something warmed the soil, and more of these elements entered the plants. Then the underground furnace cooled, and the permafrost rose to the roots again.”

All of the above means that the crater is more than 250 years old, and researchers have reason to think seriously about the source of high temperature hidden in the local depths. Magnetometry allowed professor of Irkutsk Technical University, Doctor of Geological and Mineralogical Sciences A. Dmitriev to make his assumptions:

“There is something under the crater. Something with abnormally high content of iron or other ferromagnetics for these places. This something lies at a depth of 100-150 meters and changes the magnetic field very strongly. We are dealing with a strange meteorite, which did not explode on impact with the ground, but, like a drill, went deep inside.

But the head of the geological team of one of the expeditions of “Komsomolskaya Pravda,” Professor V. Antipin, believes that three strange events took place underground at once. Explosions or something similar, as a result of which three times the rocks were thrown on the surface, which formed the body of the crater.

“A three-dimensional object with increased electrical conductivity has been detected under the crater. It is shaped like an ellipsoid or a cylinder, the top of which is located at a depth of about 100 meters. Downwards it goes to 600-700 meters. The object consists not of metal, but is formed by salt water, which fills the cavity under the crater.

Very interesting was also the result of an experiment conducted by specialists of the Institute of Problems of Mechanics of the Russian Academy of Sciences. Doctor of physico-mathematical sciences, head of the IPM Laboratory of Wave Dynamics I. Simonov is sure:

“There was a blow by a high-density and strong body of cylindrical shape, as a result of which a huge amount of rock was pushed to the surface. The length of the cylinder is 6 to 16 meters, the base diameter is about three meters. There was no explosion. This is evidenced by the shape of the crater. Pieces of rock are neatly squeezed out of the subsurface.

Final hypothesis. An alien object with the above mentioned parameters crashed into the Earth at high speed about 250 years ago. He like a shell broke through the rocks and penetrated to a depth of 600-700 meters, forming on the surface of the main cone of the crater. Then, in 1841-1842, the object released a lot of heat, which caused the soil above it to warm up and change the annual rings of trees. This caused the object to rise up its entrance channel to a depth of 100-150 meters.

READ
Alley of Chiefs - underwater museum of Tarkhankuta in the Crimea. Photo description

The ascent probably took place in two stages, leading to the formation of an inner cone shaft and a slide in the center. As a result of heat release in the channel below the object formed a cavity ellipsoidal shape throughout its depth, gradually filled with groundwater, which was revealed by electrical prospecting.

It turns out that the alien object, similar in size and hardness to a giant shell, broke through the upper part of the Earth’s crust, tried to get to the surface, but for some reason could not and got stuck at the depths.

Most likely, the Yakuts call the Patom crater “Nest of the Fire Eagle”, because their ancestors in the 18th century witnessed the fall of a UFO and used the name of the largest bird to name it, so it was clear: something big was flying. And “fiery” because the UFO was burning or glowing. And the place on the ground, where the “fiery eagle” fell, they called “nest” because of the external resemblance of the crater with an ordinary eagle’s nest built on a rock.

To get to the bottom of the truth requires expensive geological equipment, which, given the remoteness of the place, requires a huge investment. While willing to sponsor the search for truth have not been found.