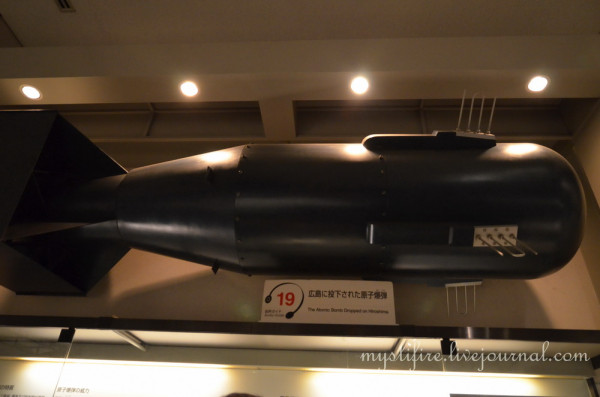 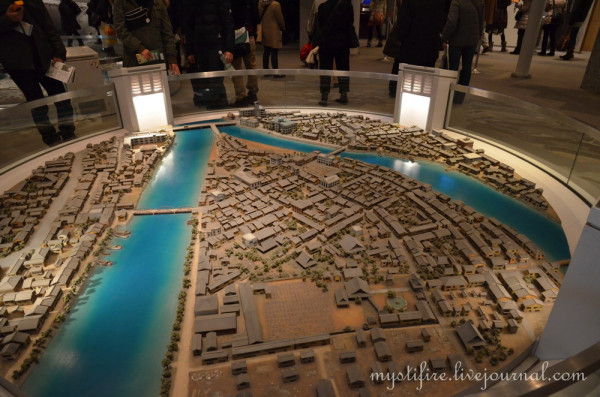 In the first hall of the museum there are two models: Hiroshima before the explosion. 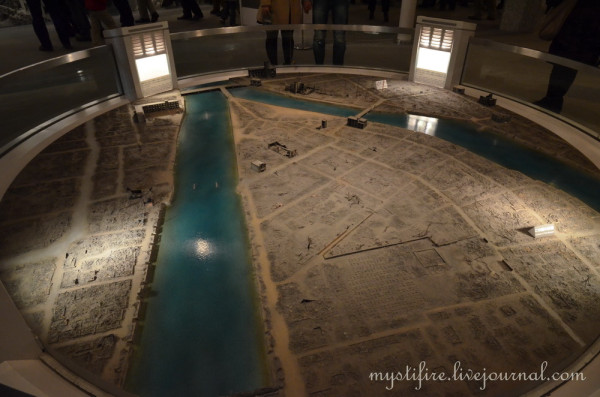 The bomb that exploded over a residential area at an altitude of 600 meters destroyed almost everything around it within a radius of 2 kilometers. On the scale of layouts, the bomb would have been the size of a grain of rice. At the time of the atomic explosion (August 6, 1945) there were 350,000 people in Hiroshima. A very realistic diorama shows what became of most of them. Burned, lost people with shreds of skin hanging down and electrified hair wander among the ruins in the glow of the fire. 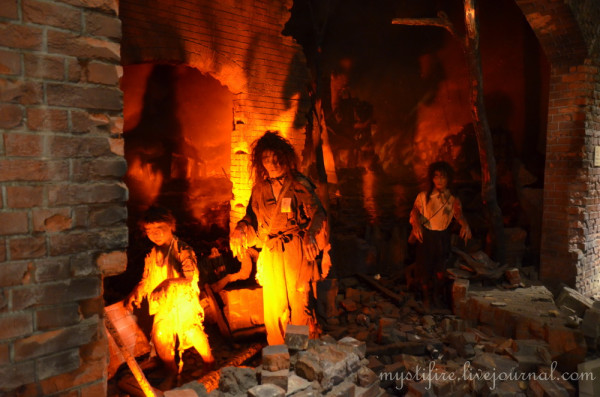 Yoshito Matsushige, a photojournalist who lived in Hiroshima and took pictures (below) after the explosion wrote: “. In front of the Senda district police station to the west of the Miyuki Bridge, a policeman was trying to provide first aid by treating wounds and burns, but the number of wounded was growing inexorably. I decided it was necessary to take a picture and had my camera ready, but what I saw through the lens was horrific. Among the hundreds of victims, burned so badly you couldn’t tell if they were men or women, were children screaming: “Hot! Hot!” and wounded, crying babies screaming beside their mothers, dead or dying from their wounds. I tried to pull myself together and assured myself that it was my job, my duty, even if someone thought I was heartless or soulless. In the end I pressed the button to shoot, and when the picture was back in front of my eyes, it was already cloudy and blurry from my tears. 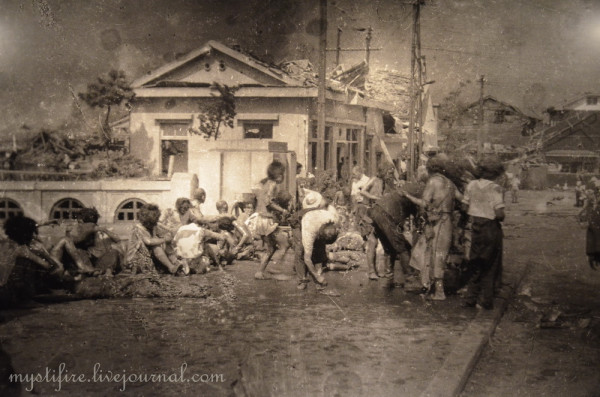 “On the Mineki Bridge (2270 meters from the epicenter) I saw a crowd of wounded, tormented people. Their hair was scorched, the skin on their hands and faces flowed as if melted.” 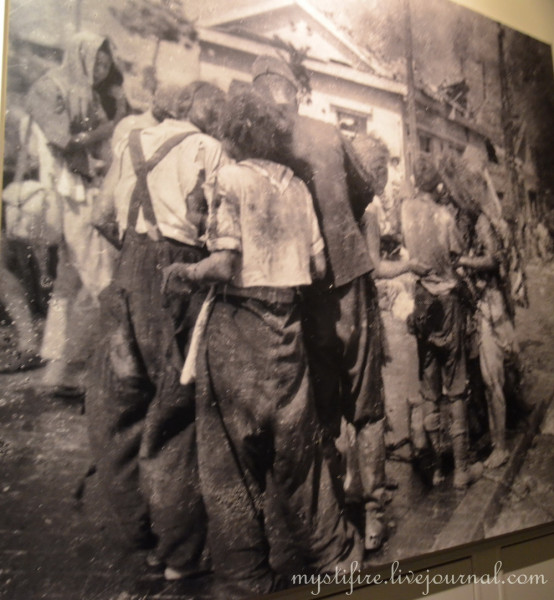 The reconstruction of the “Atomic Dome” of the once majestic building, which once housed the “Hiroshima Prefectural Industrial Promotion Exhibition,” rises two stories high. The powerful heat radiation melted the copper roof dome in one second, and only a small part of the brick building, destroyed by the almost vertically directed blast wave, remained. All the people who were inside the building at the time of the explosion were killed. In 1996, this building, which is very close to the Peace Museum and Park, was inscribed on the UNESCO World Heritage List and recognized as “an important witness that can transmit the tragedy of Hiroshima to future generations. 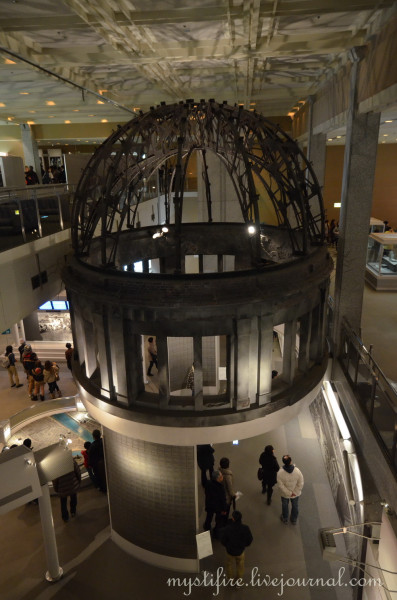 Quiet and thoughtful people moved from exhibit to exhibit, and the further into the museum we moved, the more faces weeping and even more not crying, but barely holding back tears. 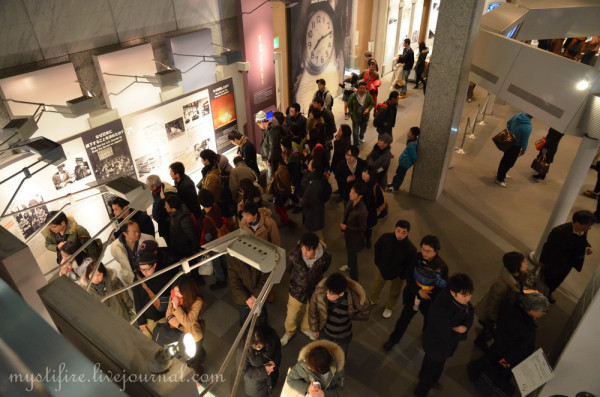 Knowing the tragic story behind each of the exhibits, it is impossible to remain indifferent.

The steps of the Sumimoto Bank with the shadow left on them. A man was waiting on the steps to open the bank. A moment after the explosion, all that was left of him was a shadow. Going into the next halls, you realize that this man was very lucky, if that word applies here. Being 250 meters away from the epicenter of the explosion, he died immediately, and he did not suffer the fate of those who suffered severe burns, wounds, terror for their loved ones, radiation sickness, and who are told about in the following halls. 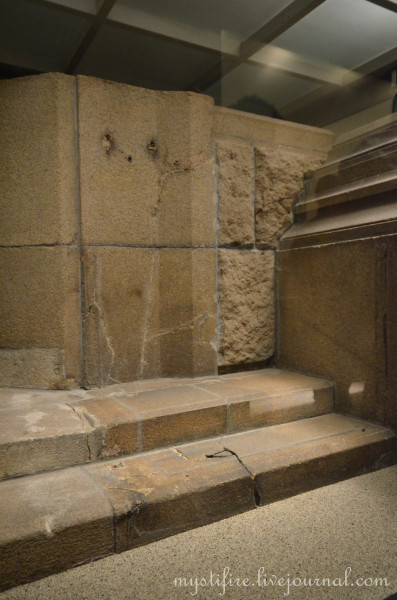 A helmet and a small tricycle. A 3-year-old boy, Tetsutani Shinichi, was riding this bicycle in the yard of his house. He was 1500 meters away from the epicenter of the nuclear explosion. The child received burn injuries as a result of heat radiation and died the same evening. His father buried him along with his helmet and bicycle. 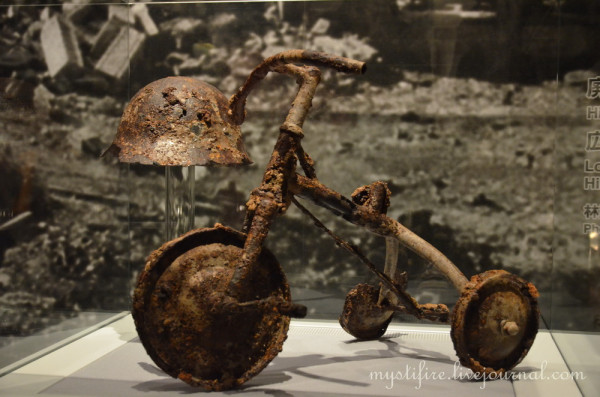 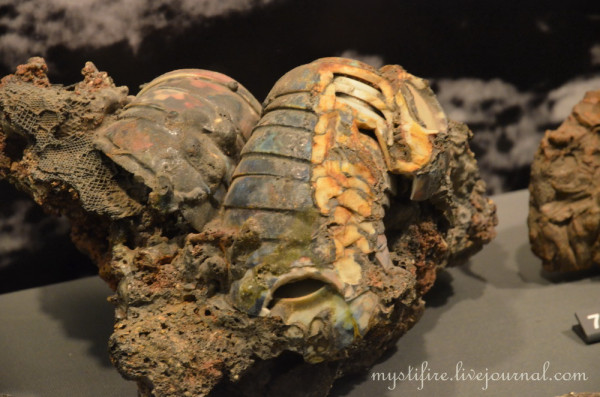 I couldn’t get past the bento.

A bento prepared by a woman for her husband named Masataro Okahara. His office was 300 meters from the epicenter. It wasn’t until a week later that the woman was able to get to the building, where she found his workstation and a chair, with bones in the pose of a man sitting on it. In his hand was a lunch box. 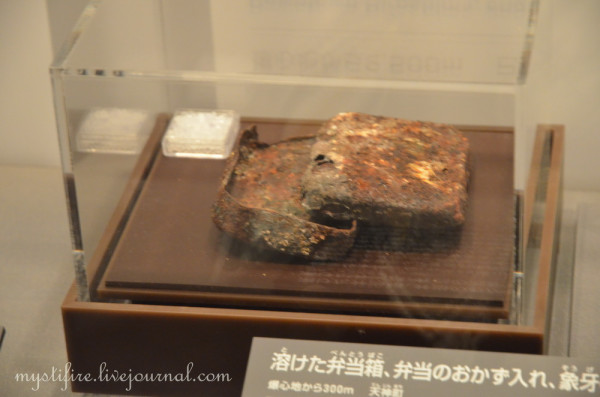 A bento box with a charred lunch consisting of stewed vegetables and rice cooked together with beans and wheat. This obento was never eaten by the child for whom it was intended. At the time of the explosion, Shigeru Orieman was 600 meters from the epicenter. The lunch box covered by the dead child’s body was found and given to the museum by the child’s mother. She was only able to identify the child’s body by this box with his name on it. 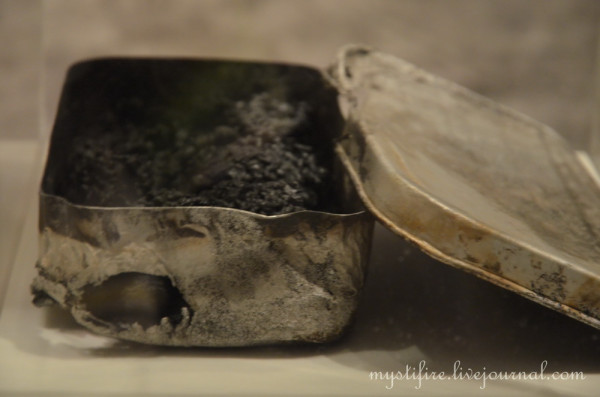 Of all the exhibits at the museum, this banto box struck me the most.

I guess you can create a horror museum like this after any war and warfare. And it doesn’t matter who, how, why and on whose side fought. The suffering and death of any person: one’s child or parent – is worthy of regret and sympathy. It seems especially unfair that civilians suffer as a result of hostilities. Original caption taken from the Hiroshima Peace Memorial Museum 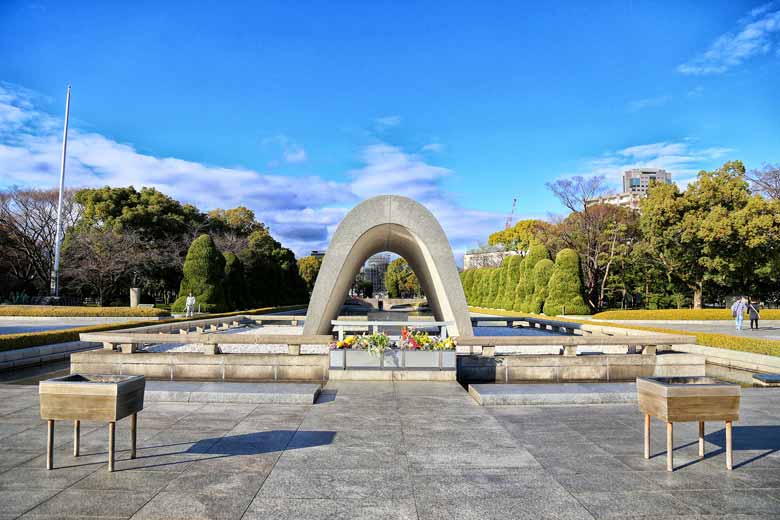 Flying into Hiroshima, every modern tourist probably thinks he or she will find a dilapidated city with “dead” neighborhoods, empty houses that were hastily abandoned by their inhabitants during the bombing. But as soon as the visitor enters the city, his opinion changes dramatically, because he meets a modern-looking city with a developed infrastructure, high-rise buildings. And, most surprisingly, everywhere is an active life. However, the tragedy of Hiroshima in August 1945 left its mark on the memory and hearts of the Japanese. For themselves and for the world, they created a unique material memorial of those times – the Hiroshima Peace Museum.

Remembering the past for the sake of the future

The Hiroshima Peace Memorial Museum is a kind of calling card of the city. This institution has no analogues in the world. Therefore, visiting it is the duty of every visitor to the city. The museum has several interesting locations. However, particular attention is attracted by the old wristwatch in the center of the exhibition hall. The hands on it stopped at the time when the bombing of the city began. 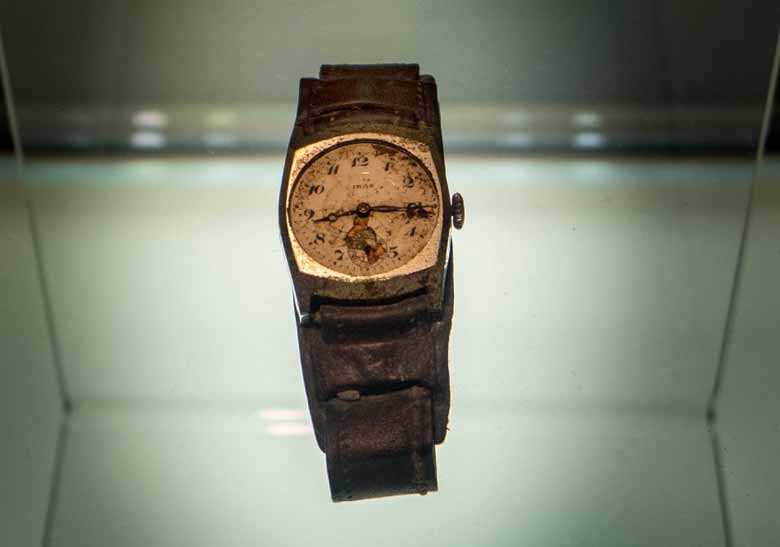 Wristwatches at the Hiroshima Peace Museum

By the way, the Hiroshima Peace Museum belongs to the military museums. Today the museum occupies a spacious building with an area of 1,023 meters. It was created back in 1955. Today, the museum, having undergone a total reconstruction in 1991, expanded its area and funds and in 1994 it was opened here already renovated Peace Memorial Hall. The main task of the museum is the preservation of artifacts of the bombing and personal belongings belonging to the inhabitants of the city.

The museum itself has a fairly simple layout and consists of the main building and the East Ward, where the museum’s main exhibitions take place. Opened in April 2017, the East Building consists of three parts: the Introductory Exhibition, the Dangers of Nuclear Weapons, and the History of Hiroshima.

In the East Building, visitors can access video testimonies of bombing victims and special exhibitions temporarily installed on the 1st floor. 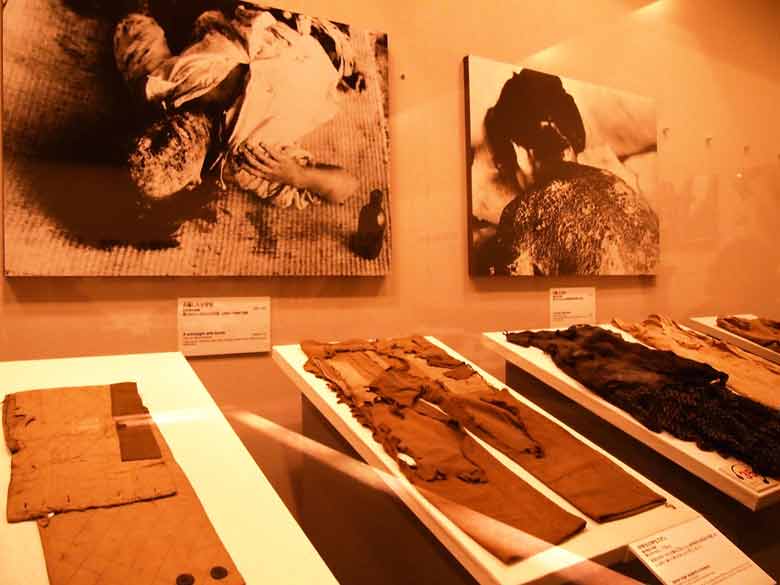 Exhibition at the Museum

Over the next two years, it is planned to organize special exhibitions on the 1st floor that will show the reality of the tragic events of August 6, 1945 in the lives of the residents of Hiroshima.

Remembrance and education for peace

The museum workers pay great attention to thematic lectures, meetings with participants of the events, conferences, round tables, which take place within the walls of the museum. After all, it is important not only to preserve the memory of Hiroshima, but also to skillfully convey it to the younger generation, to all mankind. Realizing that the witnesses of the Hiroshima bombing become fewer and fewer every year and it becomes more and more difficult for them to speak, the museum workers recorded video lectures and video speeches of these people. So anyone, anywhere in the world, can view them at any time. 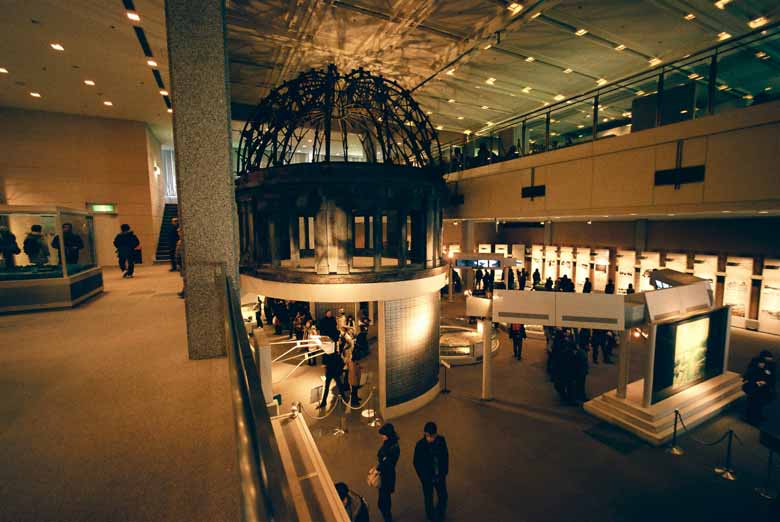 Museum of Peace inside

The museum has 2 conference rooms (50 and 150 seats), a seminar room (100 seats), and the spacious Peace Memorial Hall, with 320 seats. Numerous meetings and conferences are held here almost daily. Interestingly, there is an opportunity to invite a living participant of the events of the Hiroshima bombing to a meeting. However, this service is not cheap and is not free of charge. In addition, the application for such a meeting must be booked at least a month before arrival.

Each tourist can take an audio-guide and listen to a lecture by touring the museum on their own. You can choose to listen in English or Japanese. The duration of the recording is 60 minutes. The story includes a history of the Hiroshima tragedy, memories of eyewitnesses, scientists’ opinions on the effects of the bombing on the health of different generations in Japan, and a desire for world peace. 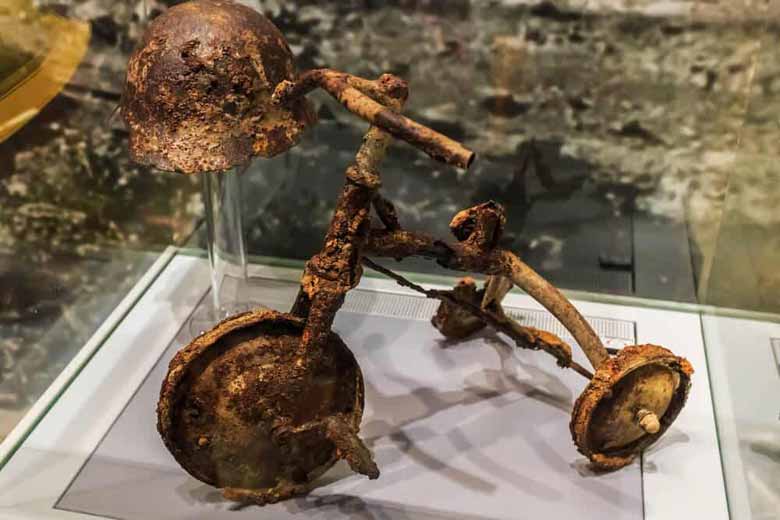 A great deal of attention is given here to volunteer movements. Young people volunteer to give tours of the museum and the adjacent Peace Park. A big plus of the museum’s service is the ability to book a tour in advance, even a year in advance of the time of your visit to Hiroshima.

The Hiroshima Peace Park, another important place for every visitor to this city, is located near the museum. The park has several structures. First of all, the A-bombing dome. This is the only structure that has survived to this day as it became after the tragedy. Actually the skeleton of the house remains intact. This gruesome structure is the main object of the park’s visit.

Not far from the dome are stands decorated with cranes, made in the technique of origami. Thousands of colored cranes are a kind of prayer for peace. 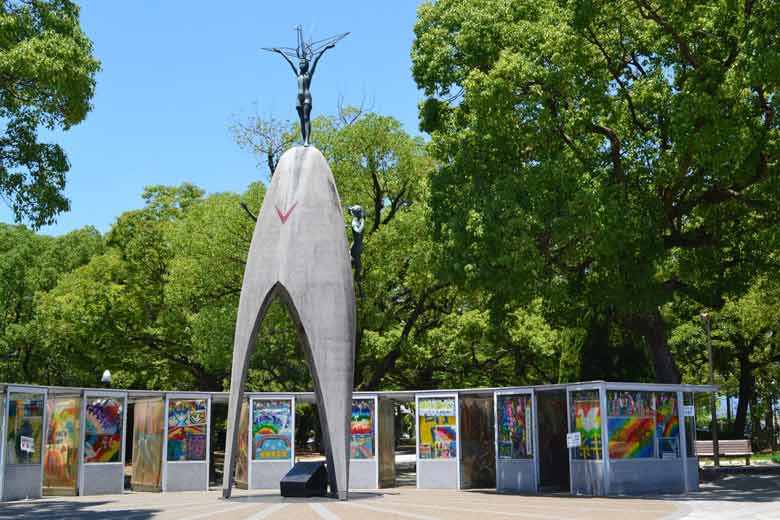 Attracting attention with its originality is the Peace Gate – six arches built in the Art Nouveau style, which somewhat resemble the traditional gate of Japanese culture – torii, which connects the real world with the divine world, the material world with the spiritual world. In Hiroshima, they symbolize the connection between past and present. And the word “peace” is written on each arch in 84 of the world’s languages. For the path from the past to the future must pass only through peace.