The Pechoro-Ilychsky biosphere reserve is located in the Northern Urals, in the Komi Republic. It was formed in 1930. Named after the Pechora and Ilych Rivers.

The boundaries of the reserve run along the Belt Stone Ridge in the east, the Pechora and Ilych rivers in the south, north and west. In the north the reserve borders with the national park “Yugyd Va”.

One of the main objectives of the reserve at its creation was to protect valuable fur-bearing animals, especially sable. Sable was practically exterminated in the Urals for its valuable fur. The only place in the European part of the country where sable still remained was the western foothills of the Northern Urals. The main ideologist to create the Reserve before the revolution of 1917 was S.G. Nat. But work on the organization of the Reserve began only in 1928-1929, when a large research expedition was organized. The year 1930 is considered the year of the reserve’s foundation.

The original area of the protected area within the natural boundaries of the Pechora-Ilych interfluve was 1134.6 thousand hectares. At first, the Reserve’s administration was located in the village of Ust-Ilych, but in 1935 it was transferred to the village of Yaksha, where it is situated up to the present day. 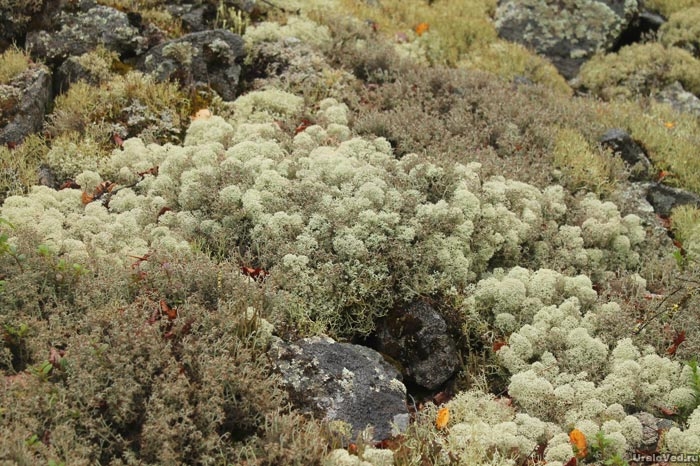 In 1950, the Pechora-Ilych Reserve was almost liquidated, along with a number of other protected areas. But scientists managed to defend it (a great contribution was made by V.A. Varsanofieva). But the territory has greatly decreased (more than 10 times!) down to 93 thousand hectares. In 1959 the territory has increased and approved again within those borders where the reserve is situated up to now (721,322 hectares).

In 1985 a landmark decision was made. The Pechoro-Ilychsky Reserve received the status of a UNESCO biosphere reserve. And on the 15th of December 1995 the “Virgin Komi Forests” territory was put on the list of UNESCO World Heritage Sites. It includes the area of the Pechoro-Ilychsky Reserve and the Yugyd-Va National Park. This is the largest intact natural area in Europe.

In the Pechoro-Ilychsky Reserve there are:

The uniqueness of the reserve is also in the fact that in 1949 here was created the world’s first moose farm. Scientists worked on domestication of moose, used them for cargo transportation through the taiga. And moose milk has a high fat content and medicinal properties. It helps with stomach diseases and promotes immunity. 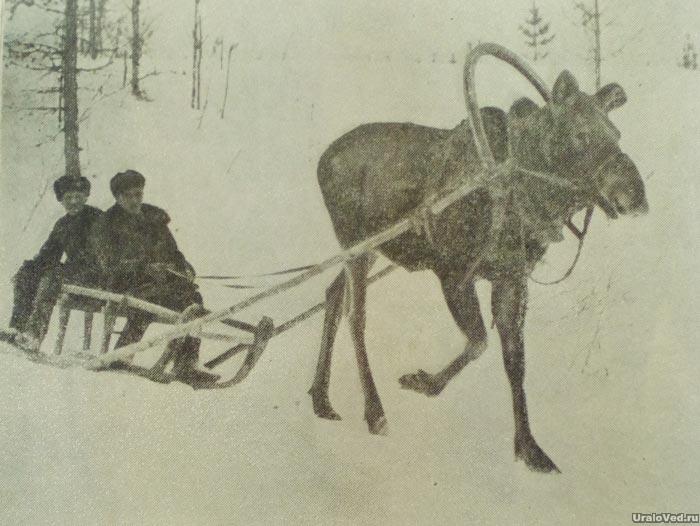 The main attraction of the Pechoro-Ilychsky Reserve is the famous Manpupuner weathering pillars. Seven bizarre rocky remnants rise above the surface of the mountain plateau. While the Ural people have known about them for a long time, the wide masses of the country’s population became aware of this place after winning the “Wonders of Russia” contest. Hundreds of tourists streamed to the cherished rocky relics resembling icons of Easter Island. 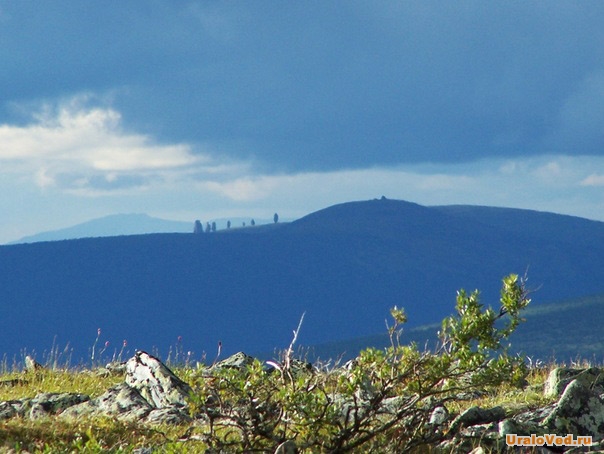 The situation turns out to be somewhat strange. The Manpupuner Plateau has become one of the most visited mountain landscapes in this part of the Urals. The fact that it is located on the territory of a nature reserve, where human presence is prohibited. Previously, the management of the reserve issued permits for visits quite officially, for a fee. Since 2016, hiking routes on the Manpupuner Plateau have been banned. But they allowed helicopter tours for wealthy Russians. Especially for this purpose a helicopter pad will be built in the protected area.

Along the banks of the rivers on the territory of the reserve there are beautiful rocks with karst relief: sinkholes, ponors, remnants, grottos and caves. The largest cave of the Pechora Urals – Medvezhya is also located here. The total length of the explored passages is about 480 meters.

We suggest watching the film “Grey Ural” (1984) about the reserve: 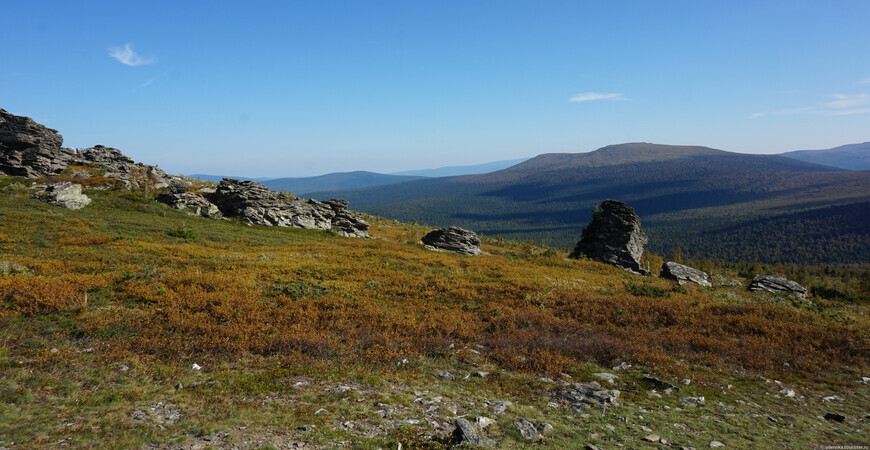 The area of the reserve is 721322 ha. The director of the natural biosphere reserve is Leonid Simakin.

The Reserve was created in the 1930s to preserve the natural complexes of the north-east of the European part of the USSR, in particular to preserve the only sable population in Europe.

Today the Reserve is one of the most famous in Russia. Tourists come here to see the unique taiga nature, to visit the central homestead of the Reserve in the village of Yaksha, where the moose farm operates, and to see unique weathering pillars – “Mansia Bolvans” or Manpupuner.

The territory of the reserve is represented by two isolated sections within the borders of the southwestern and eastern interfluves of the Upper Pechora and the Ilych.

These areas have no generally accepted names. Some sources call the southwestern interfluves “Yakshinsky,” “hog,” “plain,” “western,” or “southwestern.” It runs along the 54-kilometer stretch of the Pechora River between its tributaries Polovinnaya and Krutaya.

The piedmont district is called “dark coniferous,” “basic,” “mountain,” “eastern,” or “Ural. Its northern border runs along the Ilych River, the eastern one along the watershed of the Main Ural Ridge, and the southern one along the Pechora River.

The Manpupungyor plateau (translated as the Mountain of Stone Idols) is a sacred place of the Mansi tribe and one of the seven wonders of Russia. These are seven weathering stone pillars with a height from 30 to 42 m without a single human settlement within a radius of 100 km around. They are located on the mountain Man-Pupu-Ner between the rivers Ichotlyaga and Pechora. The stone pillars were formed on the site of high mountains that stood here about 200 million years ago. One pillar, 34 m high, is slightly apart from the others, and the others stand in a row at the very edge of the precipice. Some look like enormous human, ram or horse heads.

Geologists believe that the kecurs, or isolated boulders, are brought into being by magma flowing into the rock cavities from below. There it solidifies, and these elongated forms, the “fingers” of the Earth, are formed, which are stronger than stone and longer resistant to erosion.

The giants-standers of Manpupuner are also called Stone Bolvans, Pillars of weathering or Mansi Bolvans. In ancient times it was considered a great sin to climb this garden of stones, access was possible only for shamans. Today it is considered a place of power.

READ
National Park Losiny Ostrov, where is it

On the plateau, especially for weary travelers, a frame house is assembled, where you can hide in bad weather and rest.

Animals of the Pechora-Ilych Reserve

The fauna of the Pechoro-Ilychsky Reserve is due to its huge size and landscape diversity. Since the reserve is located at the junction of Europe and Asia, there are many vertebrate animals here. According to the registered data the fauna is represented by 49 species of mammals. Of these, the most numerous is the order of rodents. Fur-bearing animals of the Pechora taiga are the next most common: squirrels, martens, otters and ermines. In recent years the sable population has increased.

In addition to the permanent inhabitants, bats, raccoons, badgers and roe deer can be found on the territory. From time to time a fox, a spike, and a wild boar come in.

At present 242 species of birds have been registered on the territory of the Reserve apart from the migrant birds: meadow harrier and white-winged skylark. Among the most numerous are grouse, grouse, wood grouse, wigeons, tits, woodpeckers, black- and red-throated divers, storks, harriers, cranes, sandpipers, gulls, etc.

Originally in the reserve were recorded a little more than two hundred species of birds, but because of global climate change, the habitats of birds have changed. Great white herons, Barnacle geese, American wigeons and others have appeared.

The Pechora-Ilychevsky Reserve is famous for the first moose farm in the world which was established in 1930s. The idea to domesticate moose originated a long time ago, especially after the discovery of rock carvings in various parts of Siberia in which people grazed and drove moose. During the Soviet-era exploration of Siberia, moose were attractive because of their ability to carry goods through the taiga. Of course, the advent of snowmobiles eased the need for goose transportation. But by that time a lot of research had been done on moose keeping in semi-wild conditions, so the farm is still functioning nowadays.

During its existence there were several tens of moose on the farm. Tourists are attracted to this place to see the life of animals in natural conditions.

READ
The Peak District, a national park in England

Routes in the Pechora-Ilychsky Reserve

Staying on the territory of the nature biosphere reserve is possible only within the approved routes. Hiking groups of tourists move around the territory accompanied by guides or tour guides.

Getting acquainted with the reserve is possible along three routes:

There are age restrictions on passing the routes: 14+ in winter and 8+ in summer.

The central manor of the reserve

These routes cover the vicinity of the village of Yakshi.

The cost of visiting the Pechora-Ilychsky Reserve is 300 rubles.

Excursions to the moose farm, museum and routes are paid separately. The prices are different for weekdays and weekends. In addition, the services of a guide-guide are paid separately. In winter the cost of working with a group is 10200 rubles, in summer – 4100 rubles.

To obtain permission, please enclose copies of passports, the page with the registration of each group member and the Consent to process personal data.

It is convenient to get to the Pechora-Ilychsky Reserve from two large towns of the Komi Republic: from Ukhty or Syktyvkar. You can reach them by train or by plane. Then from Syktyvkar to Ukhta go to Troitsko-Pechorsk settlement, and from there by bus to Yaksha settlement.

Bus number 534 from Troitsko-Pechorsk goes twice a week: on Tuesday and Friday at 17:00.

From Syktyvkar and Ukhta you can get to Yaksha village by cab. From Syktyvkar you can take a taxi from Krylia, Taxi DK, from Ukhta – Taxi, S.V. Savochkin.

There are two ways to get to Kamenny Bolvans directly. First: from Yaksha you will have to go first by the motor boat about 200 km, then you will walk about 40 km. The second option is more expensive, but faster and more suitable for unprepared travelers: from Ukhta to the plateau go by helicopter with refueling in Troitsko-Pechorsk. The trip will take 4 hours.