The Krasnoyarsk Pillars are located in the northwestern part of the Eastern Sayan, on the border with the Middle Siberian plateau. The natural boundaries of the protected area are the right tributaries of the Yenisei River: the Bazaikha River in the north-east and the Mana and the Bolshaya River in the south-east. From the northeast the territory of the Reserve borders with Krasnoyarsk. The height of the rocks here reaches 60-90 m and the age of the oldest rock formations is about 600 million years. The pillars are syenitic remnants.

Save on your trip!

Syenite is an intrusive magmatic rock with a grayish-pink color similar to granite. Three main areas that visitors seek to visit can be identified: the Beaver Log Fan Park (the largest skiing and recreation complex located beyond the Urals), the Central Pillars, and the Chinese Wall.

The Stolby Nature Reserve is often called the lungs of Krasnoyarsk. And this is true. The untouched taiga generously gives fresh air to the industrial giant of Siberia.

The unusual shape of Krasnoyarsk pillars is evidenced by their names: Ded, Berkut, Feathers, Kovrigi, Manskaya Baba, Kitayskaya Stena, Fortress and many others. In total, there are about 500 different syenite outcrops in the reserve, and the rock pillars themselves – 99. The Feather Rock is often represented as a symbol of the Krasnoyarsk pillars”: The 30-meter high stones rise steeply upwards. There are 13 paths here. Since 1952 the move between the two edge rocks feathers called Zverevsky, in honor of the doctor Lyudmila Vladimirovna Zvereva – the first woman who climbed here without insurance. Unusual and the view of the rock Ded, which resembles the profile of an old man in a hat. According to estimates of geologists, this old man is at least 10 million years old.

One of the unwritten tenets of postism says: “A climb, no matter how difficult it is, can be considered climbed only if done alone and without any devices”. The goal is to compete with nature, to show what you can do on your own.

Unfortunately, the history of climbing has a lot of tragic cases. Many climbers, tourists and rescuers have died here. In 1997, a chapel was built to commemorate them.

Mountaineering On the Second Pillar

Already at the turn of the XIX-XX centuries Krasnoyarsk Pillars became the most popular place for recreation and tourism among residents and guests of Krasnoyarsk, so when in 1913 an attempt was made to develop the stone at the Second Pillar, and in 1917 – mass logging, it provoked strong resistance from the public. Since 1919, attempts to establish a nature reserve here began. The initiators were Krasnoyarsk citizens, who wanted to preserve their treasure.

On June 30, 1925 the Yenisei provincial executive committee issued a decree on the establishment of the reserve “Stolby” of 3960 hectares. Any economic activity was forbidden there. Throughout the 20th century the territory of the reserve was extended several times.

Ded is one of the most famous pillars of the Reserve; to climb it one has to use the “Clamp” or “Coil” rope.

There are 1037 species of vascular plants and 260 species of mosses in the reserve. About 150 plant species are included in the red books of various levels. Among them are bulbous calypso (Calypso bulbosa), slipper buntings (Cypripedium calceolus and C. macranthos), Dactylorhiza majalis, Neottianthe cucullata, Orchis militaris and Stipa pennata.

The kingdom of fir taiga, typical of the middle mountains of the Eastern Sayan Mountains, stretches everywhere here. Among the deciduous trees in the reserve you can see the Nashchokin linden (Tilia nasczokinii), an endemic species that occurs exclusively in the Krasnoyarsk Territory.

The lily of the valley (Pulmonaria officinalis) has a rare phenomenon for the plant world – the change in the color of the petals during flowering: first they are pink, then – blue. In ancient medicine, decoction of Medunia officinalis was used to treat diseases of the respiratory system.

Other medicinal plants that can be found here are Bergenia crassifolia, or thick-leafed Bergenia mongolica. This plant can even be seen at an altitude of 2,000 m above sea level.

Manskaya Baba is one of the most bizarre cliffs of the Reserve, with three points resting on a granite base.

Blue nightingales are some of the most mysterious birds of Siberia. Their range extends from the Ob to the Sea of Okhotsk, and outside Russia includes parts of China, Korea, and Japan. Some amateurs have managed to keep nightingales in their homes as well.

In the Stolby Nature Reserve, it is not uncommon to see the common viper (Vipera berus) and the vivipara lizard (Zootoca vivipara). Interestingly, common vipers prefer northern latitudes or high mountains. In the Swiss Alps they live even at an altitude of 3000 m above sea level. Vipers never exceed 70 cm in length and can be easily recognized by the zig-zag pattern on their backs. Vipers live up to 12 years.

The reserve is open to visitors in the tourist-excursion area. It has developed four excursion routes: “Takmakovsky rocky area”, “The fairy tale of the reserved forest”, “Nature – the great sculptor”, “Meeting with Manskaya baba”. Each of the routes has its own level of complexity and demands certain preparation.

The Reserve borders with Krasnoyarsk, in the same city there is the main administration, therefore it is necessary to reach the capital of Krasnoyarsk region. It is possible to do it by plane or by train. Krasnoyarsk has direct flight connections with 84 cities in the world.

There are many hotels and inns in Krasnoyarsk offering their services. 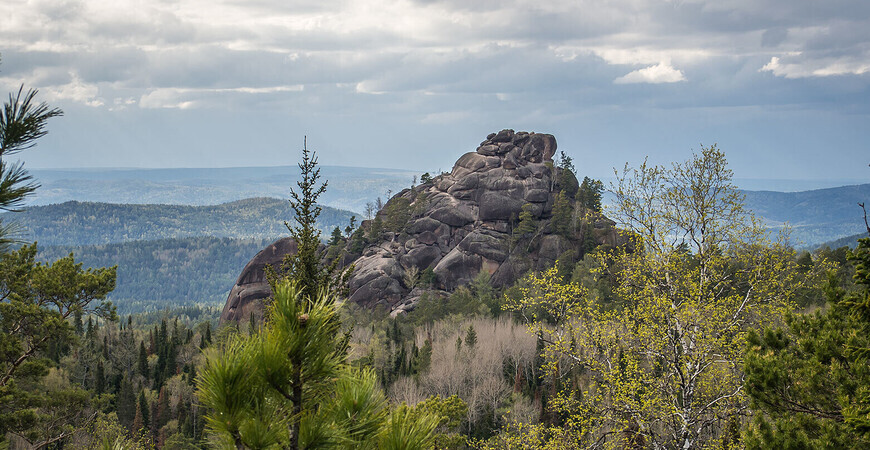 State Reserve “Stolby” is a calling card of Krasnoyarsk. Every year it is visited by more than a million tourists. In 2019, it was transformed into the national park “Krasnoyarsk Stolby”.

The territory of the reserve occupies more than 47 hectares, of which only about 3% is open to visitors – this is the part adjacent to the city. Access to the rest of the area is only allowed to employees. There is also a small specially protected area (buffer zone), which can be accessed after obtaining the permission of the administration.

The main attraction of the reserve are syenite rocks of bizarre shapes. Locals helped to save them from miners in 1925. They helped to create a protected area, protected from logging and stone extraction, and the Stolby (“Pillars”) appeared from this area.

The Rock Legends of the “Krasnoyarskie Stolby

The national park has 189 rocks and rock formations. Almost all of them have names. The Krasnoyarsk Pillars were named for their appearance or location.

In the tourist area there are “Central Pillars”. Among them a group of rocks Ded, Babka, Vnuk, Vnuchka, a complex of pillars I-IV, Feathers, Blue coils, Lion’s Gate, and Chimney Sweep stands out. If you go to the Bazaikha River, you will see massifs Takmak and Vorobushki. Near them are cliffs Borodok, Sentinel, Small Berkut, Chinese Wall, Ermak.

Near the buffer zone, the rocks Manskaya Stenka and Manskaya Baba are towering. In the closed territory, too, there are a lot of rocks – these are Savage, Fortress, Vulture, and others. It is interesting that not only the rocks have names, but also boulders, fragments of rocks and even small stones.

About 300 species of animals live in the Krasnoyarsk reserve. Most of them are taiga inhabitants – squirrels, chipmunks, sable and musk deer. Sometimes there are roe deer, polecats, gophers, and, listed in the Red Book of Russia, golden eagles and saker falcons.

For walks in the park there are 6 routes of varying length and complexity. The easiest of them is the nature trail “The Book of Nature” recommended for schoolchildren, pensioners and everyone. Its length is only 1.3 km, the circular route is 2 km and there are 11 stops along the way. The trail runs along the road from the Chapel of St. Innokenty to the First Transverse (Retroploschadka). All difficult sections are equipped with handrails and decking, and there are information boards and interactive terminals along the trail.

The Laleti Trail is also a popular route. The trail is 4.8 km long and includes challenging sections at the end of the trail. Often hikers reach high cliffs and return back. Like the eco-trail, the Laletinskaya path starts from the chapel of St. Innokenty, goes to the Retroplatforms, then to the Second Transverse, where there is a “Children’s Town”. There is a fork here: those who want to get off the trail can turn toward the highway, while those who want to continue, head uphill along the Pychtun Trail, which leads to the Pass.

A view of the reserve from the rock “Second Pillar”:

To see the “Central Pillars”, the Yenisei River and the panorama of Krasnoyarsk will be possible for those who overcome the trail to the Takmakovskaya Ridge . It is 4 km long and is available for children and seniors. The ascent begins with a ride on a cable car to the top of the cliff. From there you have a stunning view of the reserve and the city. It is better to specify the route for the descent in advance, the cliffs are braided with dozens of trails.

The 13-kilometer trail “Nature is a great sculptor” will take the whole day. You will visit the Pass, reach the rocks First Pillar, Grandmother and Grandson, Grandfather, Elephant, Feathers, and Lion’s Gate.

Fans of rock-climbing will appreciate the trail “Meeting with Manskaya Baba” . Its length is 16 km. On Manskaya Baba there are often competitions of professional climbers and mountaineers. On the way you can meet Shark Rock and the Fortress Wall.

For experienced tourists there is a 16-kilometer trail “The Fairy Tale of the Reserved Forest”. It passes through the taiga and includes stops at the most beautiful rocks of the reserve. Return back by cable car.

You can walk the trails on your own (the entrance is free) or in a group with a guide. To do this, contact the administration of the Krasnoyarsk Pillars Reserve and pay for the service.

Visiting the protected area must comply with a number of important rules:

How to get to the Krasnoyarsk Pillars

There is a chance to get as close as possible to the Eastern entrance of the protected area by car. The nearest bus stop is “Bazaikha settlement”, you can get there by bus 37. The route from the bus stop is along the central street of the settlement to the stele “Stolbov” (about a kilometer), then to the right along the unpaved road to the Granite Quarry.

There are regular buses from Krasnoyarsk to the reserve. Buses #19, 50, 78 take you to the bus stop “Tourbaza” 7 km away from the Reserve; route #80 is added to them on weekends.

From the bus stop to the Central entrance of the reserve you should get over another 7 km, the route lies along the territory of the reserve and it can be treated as a full-fledged hike. On the way you can see the 1st protected cordon, “Forest theater”, “Retroploschadka”, go up Pychtun, and then have a rest on the Pass. There are signs and information boards along the whole route.

The third option of the trip is to get to the Beaver Log Fun Park, the bus number 37 goes to the stop of the same name. Climbing to the observation deck is done by the “Beaver Log” cable-chairway. There is an approximately 800-meter path from the cableway station to the rock cliff Takmak.

Planning to conquer the Stolby Nature Reserve in Krasnoyarsk on your own? Renting hiking equipment will help you to organize the trip of your dreams for much less money than you would spend to buy it.