Retba, the pink lake that feeds and destroys the local population

Receive one most-read article in your inbox once a day. Join us on Facebook and VKontakte. Lake Retba, or as it is often called, simply Pink Lake, is located in Senegal just 20 km from the Cape Verde Peninsula. It is the only lake of its kind in all of Africa – you can’t see real pink water anywhere else on the continent. It is both a paradise resort and a hell of a daily job. The lake is less than an hour from Dakar, and used to be even the terminus of the Paris-Dakar race. Now it serves as a tourist attraction as well as an excellent source of salt – the salt content in the water reaches 40%. At the same time, there is no industry near the lake that could be blamed for the discoloration of the water. In fact, it is much simpler than that. The high salt content of the water has created ideal living conditions for the bacterium Dunaliella Salina. The bacterium produces a red pigment that helps it absorb sunlight. That’s why the color of the water changes – in the dry seasons (January to March) the pink color of the lake becomes more intense. Although sometimes the lake dramatically changes color even during the same day: from pale pink to rich, from light rust to almost chocolate brown. So that tourists are sure to stay near the lake, near it resorts are equipped that look like a real paradise. And this despite the fact that the lake itself can not be more than 10 minutes – it is fraught with severe burns on the skin. And you can see that such restrictions do not confuse the local population, which spends hours in the water, extracting salt. It is believed that about a thousand people work in the lake every day. In a year they collect about 24,000 tons of salt, most of which is exported to other West African countries, especially the Republic of Côte d’Ivoire. It is this fishing, along with tourism, that is the source of income for the local population.

READ
The Cape of Good Hope - Southwest Point in Africa So how is it possible that locals can be in very salty water and not get burned? The whole secret is that they abundantly apply shea butter on their skin – it protects them from the devastating effects of rosewater. The same oil, of course, is offered to tourists – they too can try to swim in the salt lake and make a couple dozen great photos. But the local workers can’t do without this oil – in addition to saving them from salt burns, it also protects them from sunburns. It is often hot in Senegal above +36C, and it is not very pleasant to work in such conditions. In a week, one worker in the lake on average collects about a ton of salt. The locals don’t work for a firm, but on their own, going to Dakar to sell their spoils. There they sell this salt for $35 a ton. “It’s very beautiful and peaceful here,” says Keita, one such worker. – But the work is very hard.” Without education and qualifications, it’s almost impossible to get any work here. So he continues to spend his time working in the salt lake day in and day out. – “If I had the chance, I’d leave. I’m on the edge of survival here.” In our article “Horrible pages of history” we told about another Senegalese attraction – the island of Gorée, which was once the center of the slave trade.

Senegal: the mystery of the pink lake

The ancient lands of the Black Continent hold many natural wonders, one of which is a fantastic lake located near the Cape Verde. It is Retba, the most interesting attraction of Senegal and one of the most colorful places on the planet. 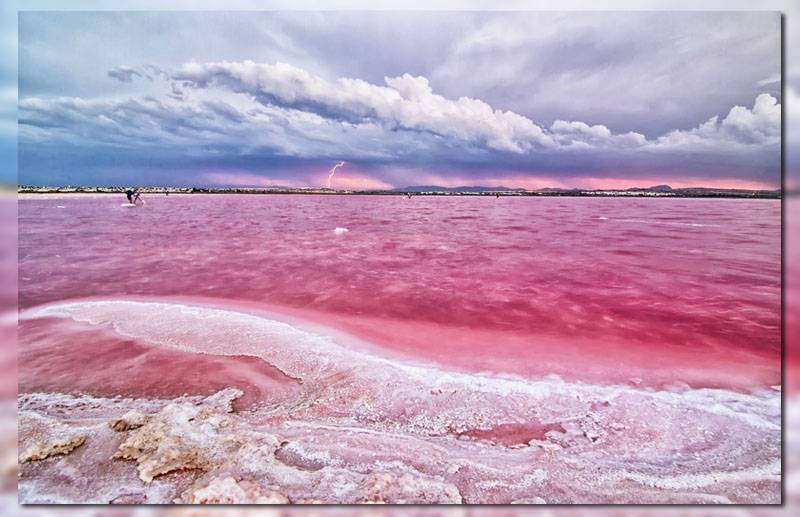 The ancient lands of the Black Continent hold many natural wonders, one of which is a fantastic lake located near the Cape Verde. It is Retba, the most interesting attraction of Senegal and one of the most colorful places on the planet.

Colorful in the truest sense of the word! The waters of Rose Lake, or Retba in translation from the Wolof ethnic group’s dialect, shimmer in the hot African sun with a whole palette of pink colors from gently crimson to crimson scarlet. Especially bizarre is the view of the reservoir from a bird’s flight – a strawberry patch framed by the emerald green of the jungle – a truly mesmerizing landscape! 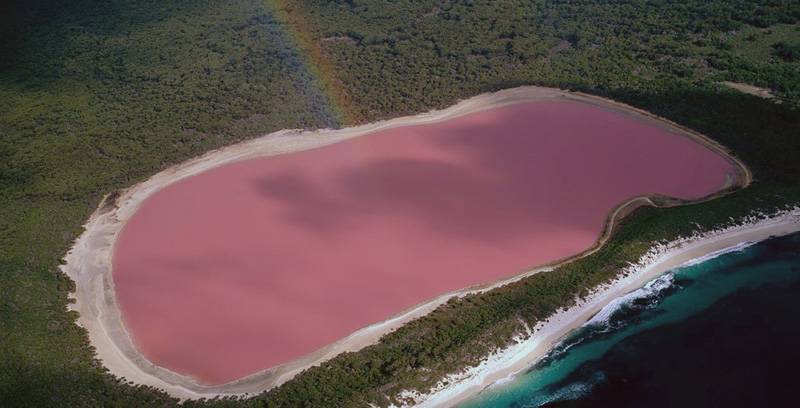 Pink Lake – a bright spot on the map of Africa

This amazing body of water is located in the western part of the African continent, just thirty kilometers from the main city of Senegal, Dakar. A narrow strip of sand dunes separates the Pink Lake from the mighty waters of the Atlantic. The two-kilometer coastline Retba is a truly picturesque canvas: a string of small boats on a purple water surface, the finest golden sand and snow-white mounds of salt pyramids. The French-speaking population of the country gave the lake another name – Lac Ros. 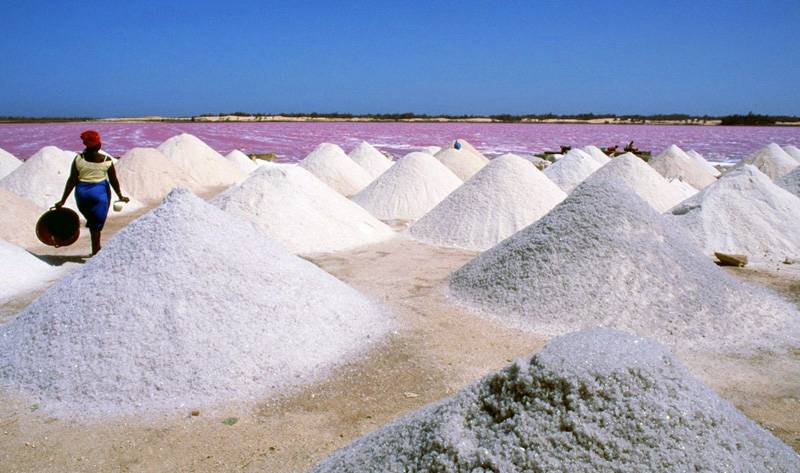 History of the magical lake

It may come as a surprise, but Retba wasn’t always a lake. The body of water was once part of the Atlantic Ocean, a cozy lagoon separated from Big Water by a narrow channel. The ocean’s surf and winds washed up the sand for centuries until the channel completely disappeared, creating a salt lake of no more than three square kilometers.

Why is it this color? Until the 1970s, Retba did not stand out among ordinary salt lakes. But the greatest drought in the history of Senegal caused the lake to become shallow, giving access to the deepest salt deposits at the bottom of the reservoir. It was during those years that the extraordinary rainbow phenomenon manifested itself. 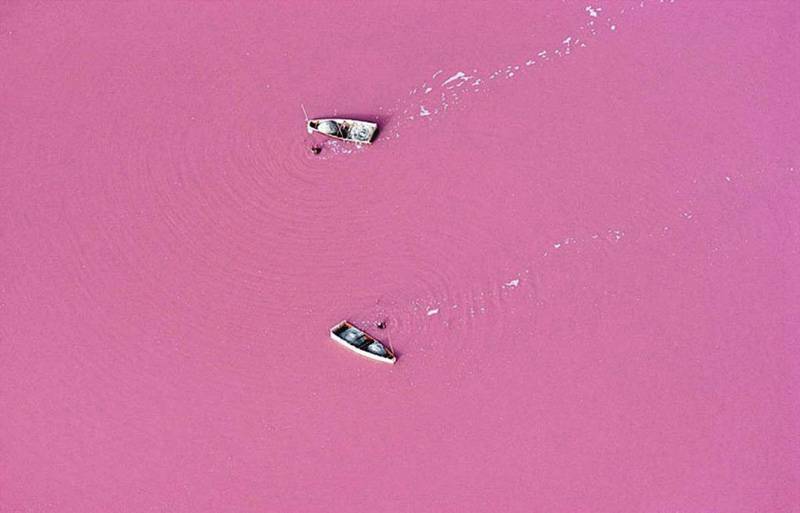 The mystery of the pink water

How can we explain the extraordinary shade of Lac-Rose? It is very simple, there is nothing mystical or supernatural here.

The amazing purple color of the water is caused by myriads of microscopic organisms, cyanobacteria of the genus Dunaliellasalina, which have chosen Retba as their habitat.

It is the pigmentation of these ancient living creatures that colors the lake with the delightful colors of flamingos and morning dawn. The coral hue of the water is also influenced by the abundance of fossil deposits of minerals and chlorine on the shore. The color of the lake is very heterogeneous and can vary depending on various factors: the angle of the sun’s rays on the lake surface, cloud cover and dry weather. The brightest and most intense pink color is typical of Senegal’s dry season, from May to November.

One of the saltiest bodies of water in the world

Dunaliellasalina is the only form of organic life capable of existing in the concentrated salt solution of Lake Retba. The salt content in Lac Ros is more than 380 grams per liter, which is one and a half times the characteristics of the Dead Sea. The increased density of the water facilitates swimming and prevents drowning, however, staying in the pink waters for more than ten minutes is fraught with severe burns and non-healing sores on the skin surface.

Salt mines are a major source of income for the local population. On the shores of Pink Lake sits a small Wolof hamlet, whose residents are all engaged in salt mining. It’s not an easy job: male miners stand in water and scoop salt crystals from the lake bed by hand. To protect themselves from the corrosive solution, they treat their skin with shea butter. At the bottom of the lake, workers first blindly loosen the salt, then fill bulky baskets with the powder and send them by boat to shore. 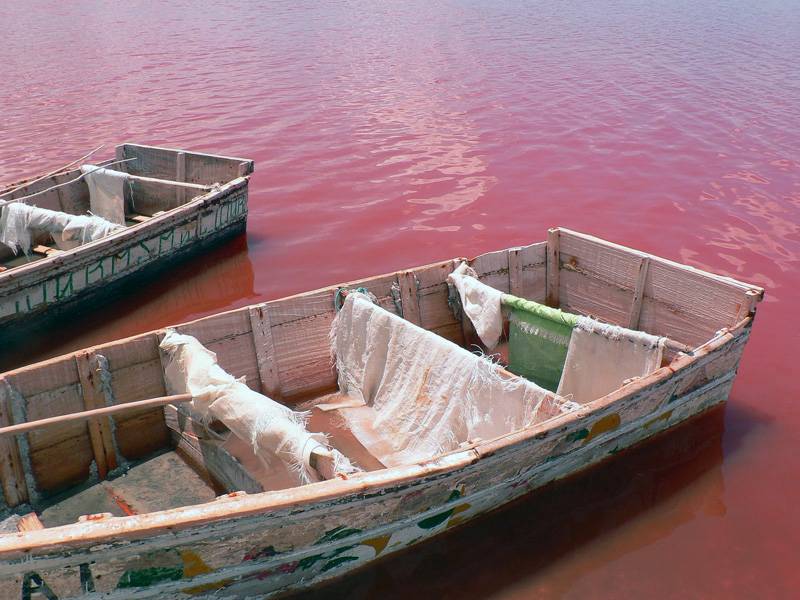 The small flatboats are able to hold up to half a ton of cargo due to the high density of the water, which saves a lot of time on transportation. Women and girls get involved in the work process on shore – the salt is dragged to the shore, washed of mud and silt and left to dry. Later, the salt from the bottom of the Lac Ros goes to resellers and is used mainly for preserving seafood, and in some restaurants in Europe is served as an exotic product.

Not only locals are employed in salting, men from neighboring countries of the continent also come here to work. The modest pay of nine dollars for a hard day’s labor is considered quite acceptable for Africa. These “guest workers” build their temporary dwellings from improvised materials right on the shore of Retba. Every year, up to 25 thousand tons of salt are removed from the bottom of the pink lake, which leads to a rapid deepening of the reservoir – previously the water in Lac Ros only reached the belt, and it was possible to move on foot. 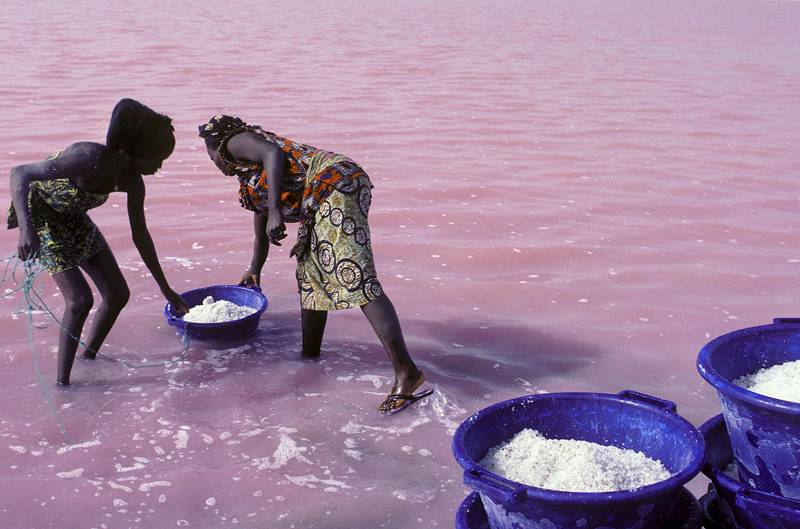 Every year, thousands of tourists come to the pink waters of the Retba, wanting to see firsthand and capture the extraordinary miracle of nature. Those who are just about to discover Senegal and its remarkable places will find some of the nuances of traveling around the lake useful:

Lake Retba is a fantastic natural site, which must be visited when traveling through the vast expanses of hot Africa. The mesmerizing beauty of the pink glaze in the daylight and in the first rays of the waking sun will not leave connoisseurs indifferent. Tell us about your impressions of this delightful place.