Piri Land is an Arctic desert without ice. Greenland

Peary Land is a peninsula on the northern tip of Greenland. Despite the fact that this corner of the world is located at a distance of just over 700 km from the North Pole, its surface is almost completely free of ice. And it has been in this state for the last 8,000 years, since the glaciers retreated at the end of the last ice age. In fact, Pirie Land is the northernmost extensive ice-free region in the world.

Where is Piri Land?

The peninsula is part of Greenland and extends from Victoria Fjord in the west to Independence Fjord in the southeast, and is washed by the Arctic Ocean to the north.

Pirie Land occupies an impressive area, measuring approximately 375 by 200 kilometers. The approximate area of the site is more than 57,000 km2 . Here is the northernmost point of Greenland – Cape Morris Jesup. 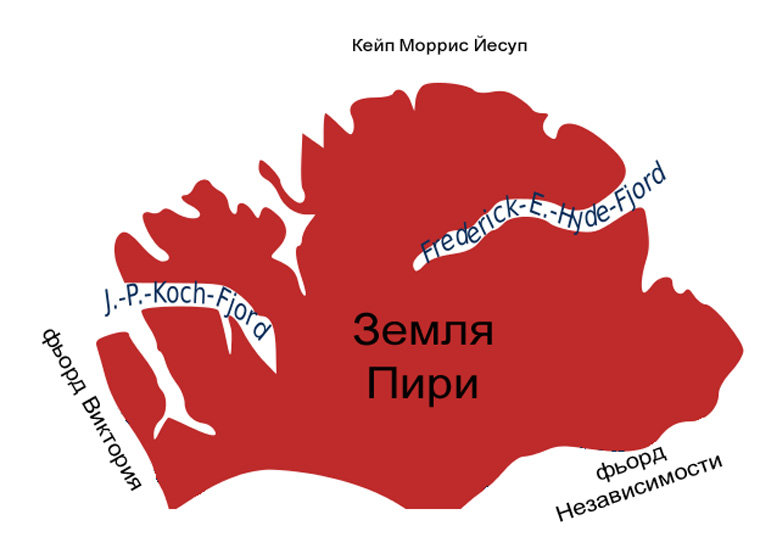 Diagram of the Pirie Land

Geographic features of the Land of Peary

It cannot be said that the entire area is free of ice. In the western part is the Hand Tausen Idap Glacier. The thickness of its ice cover is at least 344 meters.

The surface of the peninsula is mountainous. It is believed that its highest point is Mount Wistar Bjerg (1737 meters above sea level). The second highest mountain is Mara (Mara mountain) – 1655 meters. But there are still unnamed peaks up to 1950 meters high.

It was originally thought that the Land of Pirie is an island separated from Greenland by a channel connecting the Victoria and Independence Fjords. 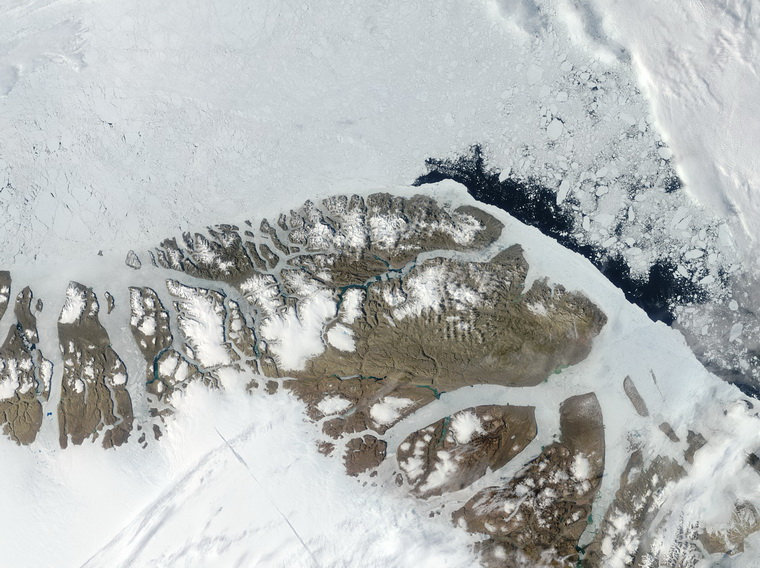 About 500 km south-west of Piri Land lies the interesting island of Hansa. It is not the island itself that is remarkable, but the war that is going on between Greenland and Canada over it. Learn more about Gansa Island and the Whiskey War.

The climate in the area is Arctic, with very short and cool summers and long, cold winters. Precipitation levels here are so low (about 25-200 mm of snow per year) that the region is often referred to as the “polar desert.

Incredibly, even in this remote rocky area, both flora and fauna can be found under harsh climatic conditions. Rare vegetation can exist in only 5% of the Piri Earth. A total of 33 varieties of plants grow here, among which there are even two species of tiny flowers – the stonecrop supressifolia (Saxifraga oppositifolia) and the polar poppy (Papaver radicatum). These are the most northern flowers in the world.

According to scientists, 1-2 million years ago, the climate in this area was much milder, so there grew here quite large trees, such as larch, spruce, thuja, and even birch.

Of the animals now there are reindeer caribou, musk oxen and lemmings, which eat scarce vegetation. In addition, polar wolves, Arctic foxes, Arctic hares and the Arctic master, the polar bear, appear here.

Discovery and study of the Piri Earth

Piri Land was discovered in the late 19th century. This remote part of the planet was named after its discoverer Robert Peary.

A little about Robert Peary

Robert Edwin Peary Sr. was an American explorer and U.S. naval officer, born May 6, 1856. In the late 19th and early 20th centuries he made several expeditions to the Arctic. In particular, in 1891-92, he explored the territory, which later was named in his honor.

An interesting fact – Robert claimed that on April 6, 1909, he made an expedition to the geographic North Pole of the Earth, which, in his opinion, lay in the area of modern Piri Land.

Piri Land holds many interesting scientific and cultural features. For example, archaeological expeditions in the middle of the last century found traces of several permanent settlements belonging to ancient tribes. The oldest dates back to 2400 B.C.

In 1947-48, during one of the expeditions on the west coast of Jørgen-Bronlund Fjord in the south of Piri Land, scientists from Denmark built a research station Bronlundus. This station was the northernmost research station in the world before the construction of the Alert settlement in Canada in 1950. 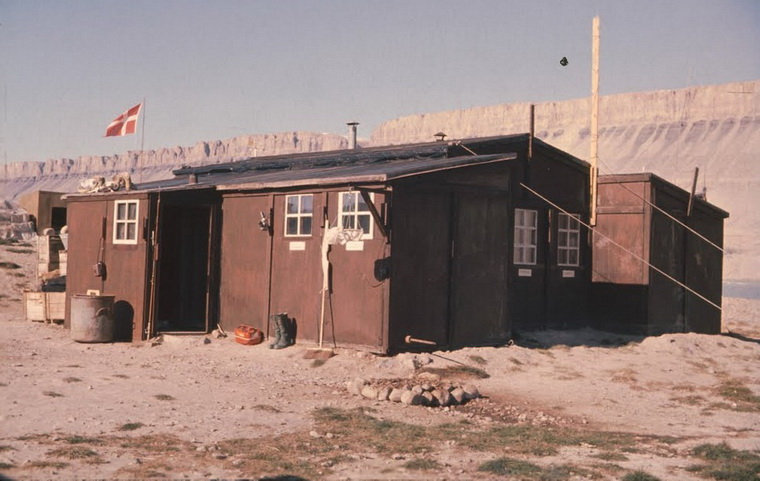 By the way, it wouldn’t be out of place to read about Ayrth, the world’s northernmost permanent settlement and military base

Now Brønlundus station does not work, but contains a rich collection of artifacts of past polar expeditions. There have been proposals to turn the station into a museum. If it happened, it would be the most northern museum in the world. Now officially the station is not a museum, but in fact it fulfills this role.

As you guessed, there are no tourists here. The only visitors are polar explorers, who occasionally visit these parts.

Don’t forget to read the article about the Soviet Pole of Inaccessibility station on the opposite side of the planet in Antarctica. It too is sometimes visited, but only by polar explorers.

Greenland – the largest island on earth

What do we know about Greenland? It is a distant and cold country, but not everyone understands its charm. For most, Greenland is just the biggest island in the world, nothing interesting. The Travellizy team decided to figure out what fascinating things can be found in Greenland.

How to get to Greenland

You can only get to the island by plane. Air Greenland flies from Copenhagen to Kangerlussuaq or Narsarsuaq. The flight time is almost 4.5 hours. From Reykjavik it is possible to fly with Air Iceland: in winter there are flights to Kulusuk and Nerlerit Inaat, in summer Narsarsarsuaq, Ilulissat and Nuuk the capital of Greenland are added. The flight takes only two hours. 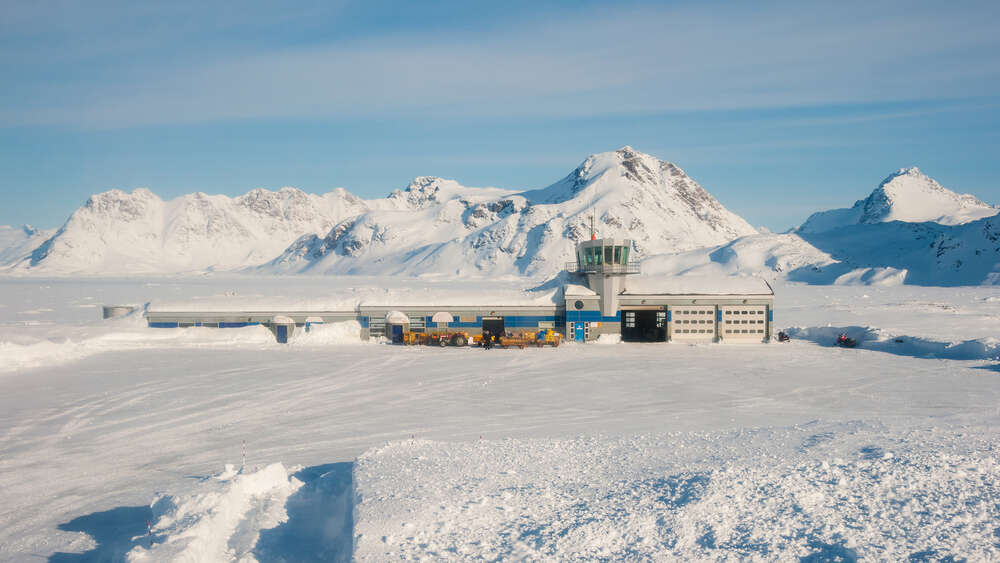 Important: It is Air Iceland that flies to Greenland, not to be confused with Icelandair.

Features of the country

Greenland locally Kalaallit-Nunaat actually belongs to Denmark, so a visa for the trip must be arranged at the Danish visa center. With a biometric passport, it is possible to travel to Greenland on a visa-free basis. 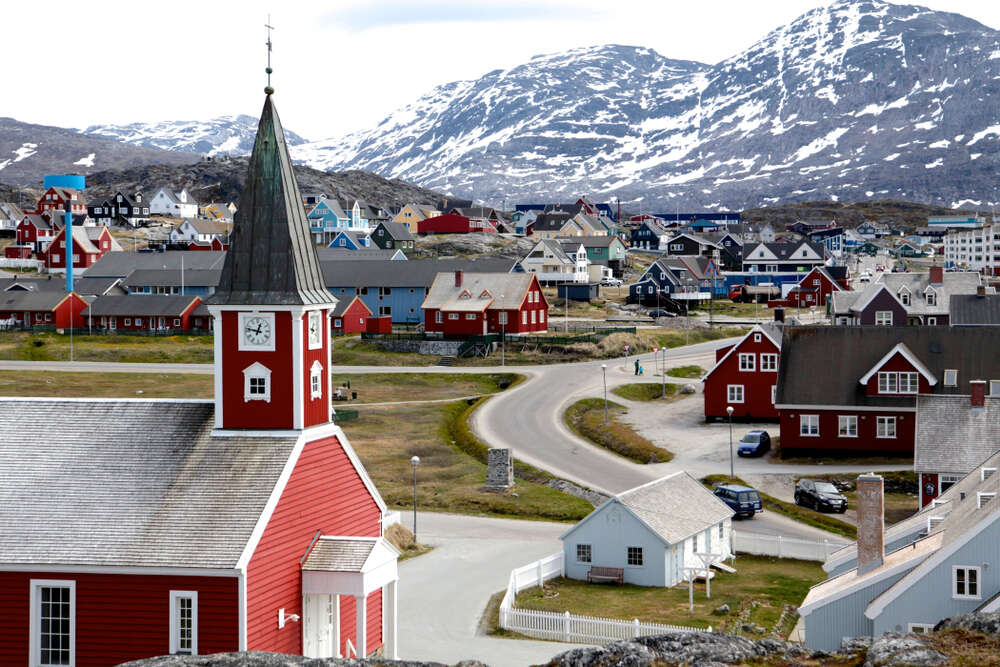 Greenland is one of the safest countries in the world. Here it is hard to imagine even purse snatching, so there is no crime in this country. So at night you can safely go for a walk, but it is better not to leave your phone unattended.

The island is minimal likelihood of natural disasters: there are no tsunamis, earthquakes, tornadoes and volcanic eruptions. But there is a lot of snow and ice Greenland is considered the second largest glacier in the world after Antarctica. 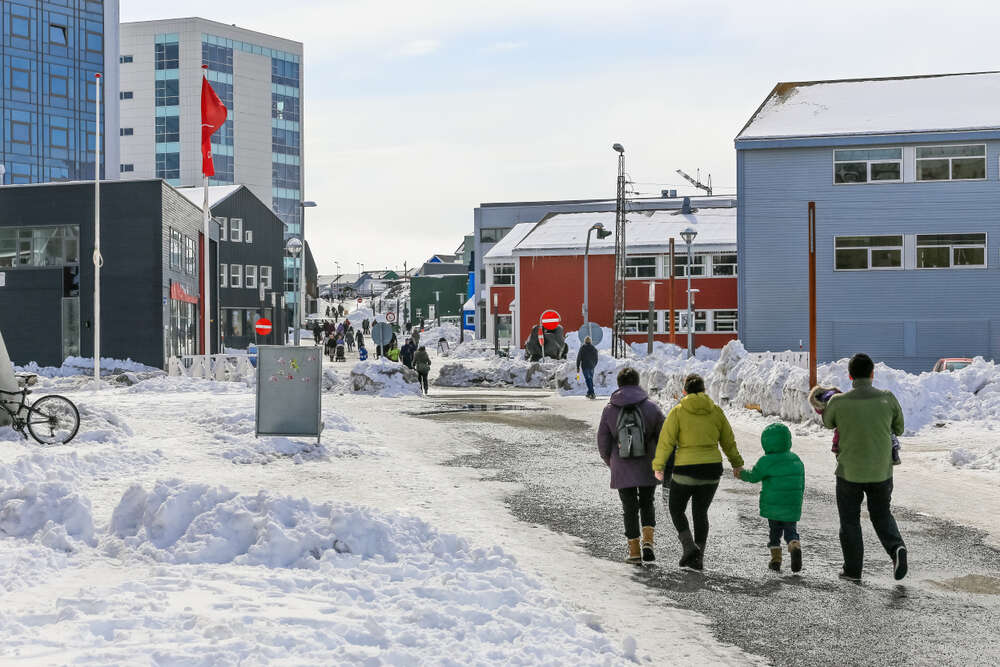 There are no roads of any kind here, neither roads nor railroads. You can get from town to town either by air or by water. Air Greenland, the national airline, flies across the island, and Arctic Umiaq Line and Disko Line are available for those who want to travel by ship. 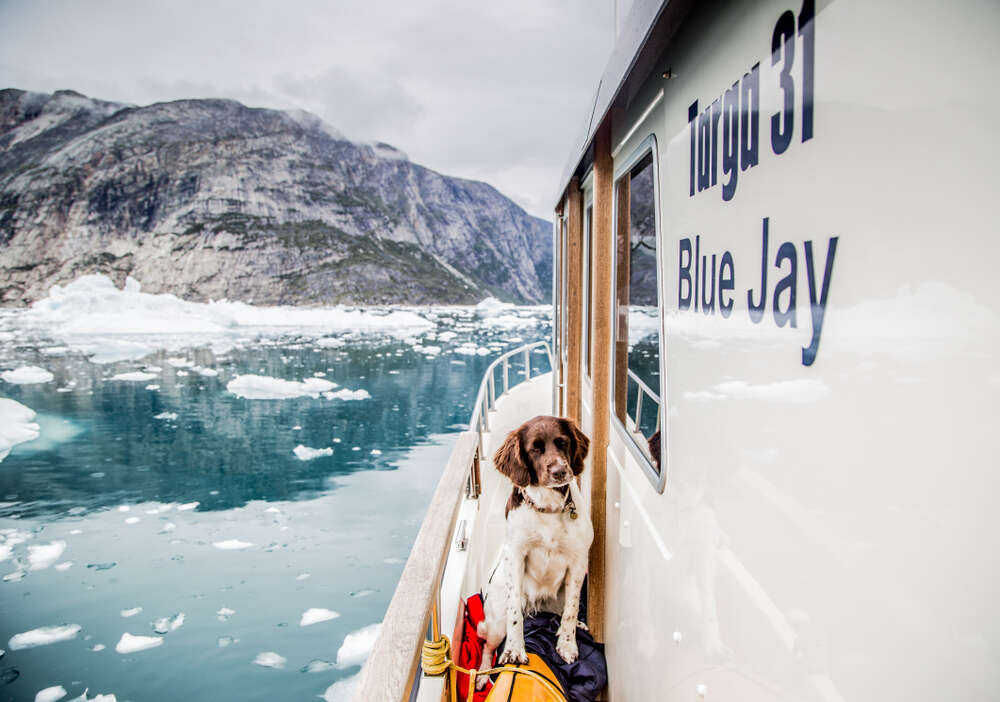 This is the largest and longest fjord in the world. It is 1450 m deep and reaches 250 km deep into the island. It was named after its explorer William Scoresby, who drew a detailed map of the fjord and founded the only village in the area called Illokkortoormiut. About 500 people now live there. The fjord is also known for the richest flora and fauna in Greenland. It is home to musk oxen, reindeer, squirrel hares, eiders, swans and other animals. 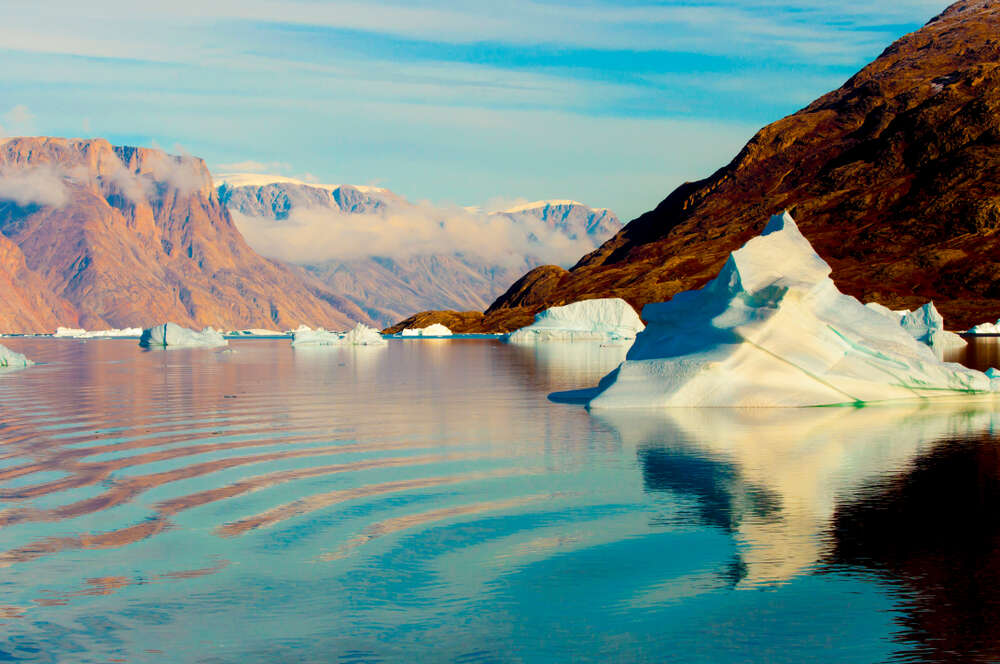 It can be seen in any northern country. But in East Greenland you can enjoy the brightest and most beautiful northern lights in the world! More than half of northern lights hunters come to Greenland after other northern countries. Here in order to catch this beauty you don’t even need to leave the city. The lights often appear in the capital city of Nuuk, where there are only 15 thousand people. 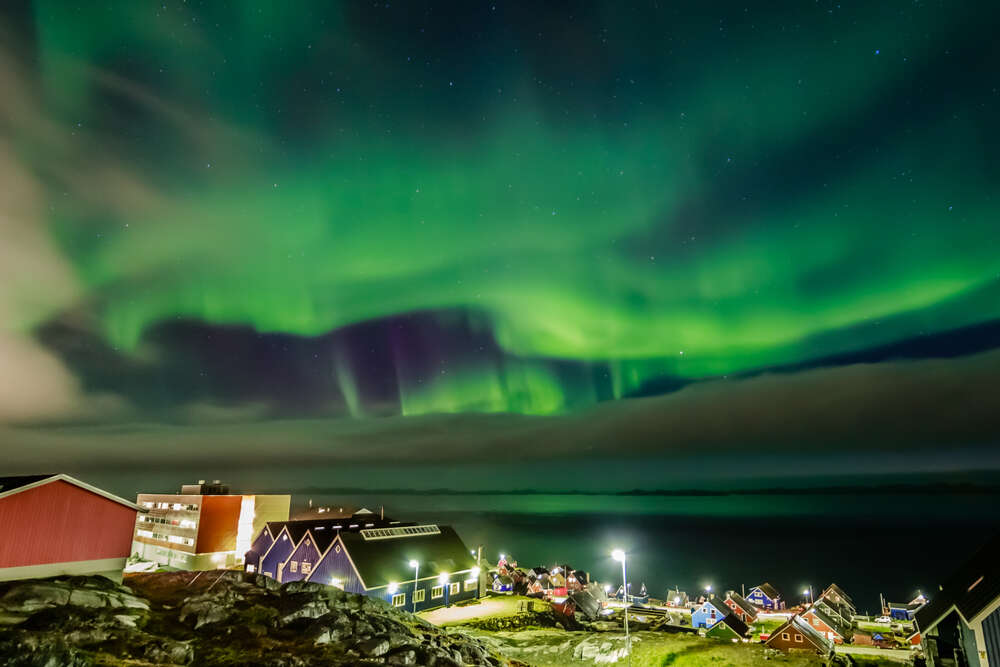 Perhaps because of this number of people and, accordingly, a small amount of light, you can see the northern lights in Nuuk. And for those who want to see the lights in the wild, there are special ships. They go for walks on the ice expanses, where bears and seals live, and there you can see the glow in the sky.

Important: the northern lights occur between September and April.

This incredibly beautiful canyon is located in the center of the island and reaches a depth of about 45 meters. The deep blue water contrasts greatly with the snow white, making the canyon seem even deeper. This canyon was formed as a result of melting glaciers and became home to many animals. Polar wolves, reindeer, Arctic foxes and polar bears live here. And in the coastal waters you can see walruses, seals and even bowhead whales. But the main decoration of the fjord is the icebergs and hills that are breathtaking. 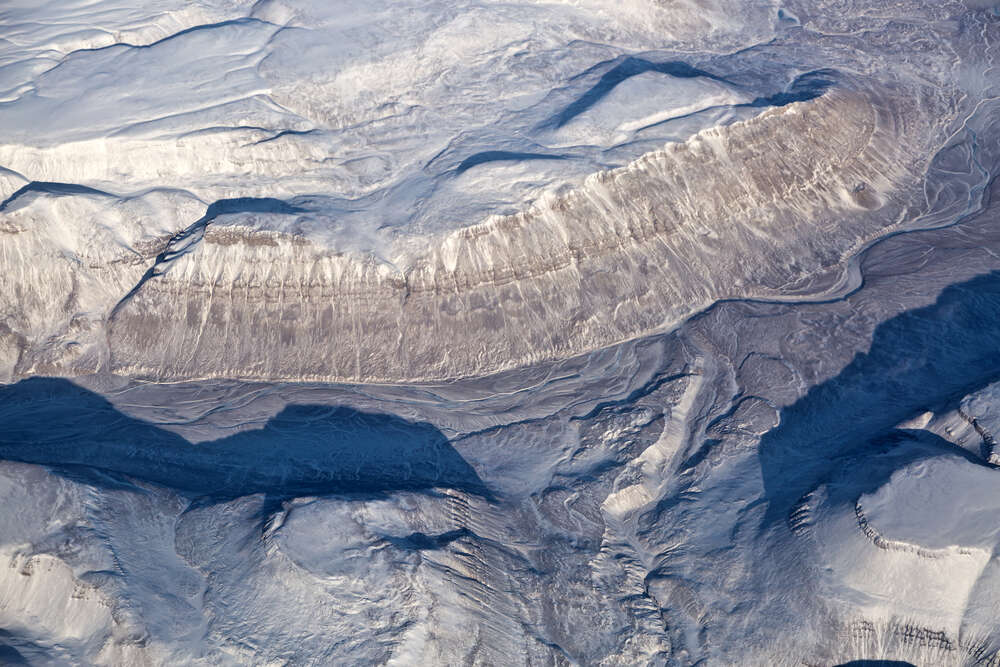 This is a peninsula in northern Greenland where, surprisingly, there is virtually no ice. And no, it hasn’t melted because of global warming. Piri Land has been in this state for almost 8,000 years when the glaciers retreated at the end of the Ice Age. This place is considered the most extensive ice-free region in the world of more than 57,000 m². And this is about 700 km from the North Pole! The only ice-covered area is the Hand Tausen Idap Glacier in the western part of the peninsula. The ice thickness of this glacier is 344 m.

There are mountains and hills all over the surface of Piri Land. The highest point is Mount Wistar Bjerg (1737 m). Near it grows the most northern flowers in the world, the polar poppy and the supranaceous stonecrop.

The Piri land is called a polar desert: the amount of precipitation here is very low, and it snows from 25 to 200 mm a year.

Greenland has its own official tourist website, where you can plan your trip.

For fans of skiing, snowboarding and other winter adventures it is better to go in April, and if you want to enjoy the white nights go to the island from May to July. 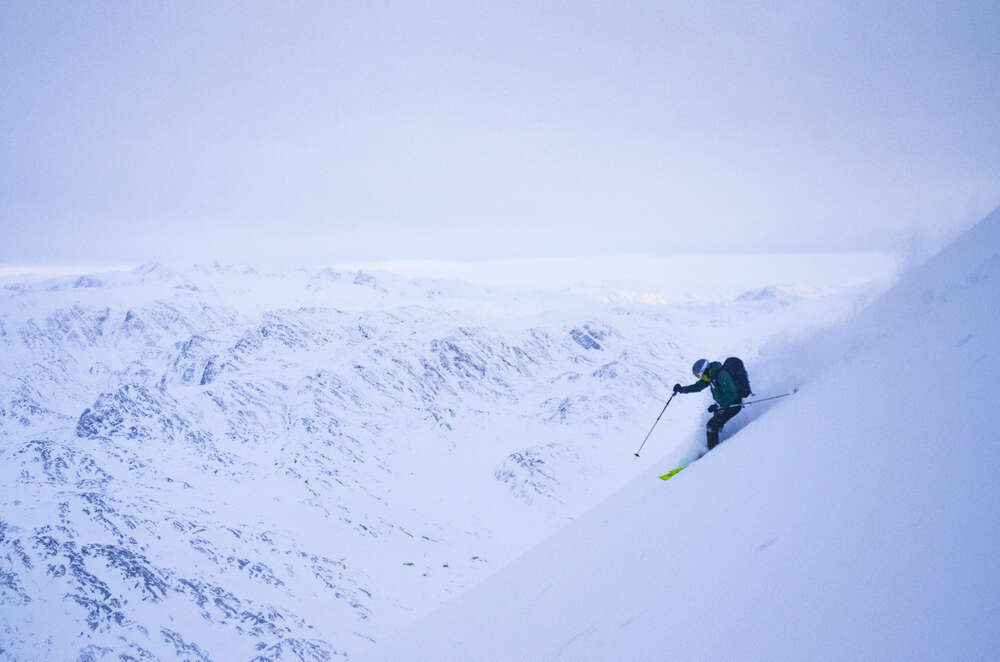 Be sure to bring warm clothes, even if you don’t intend to go out of town. Warm, sturdy boots and tight clothing that protects you from the wind should be your main companion.

In summer, the sun is very strong sunshine almost all day long, so be sure to bring sunglasses, sunscreen and a light scarf to cover your neck. 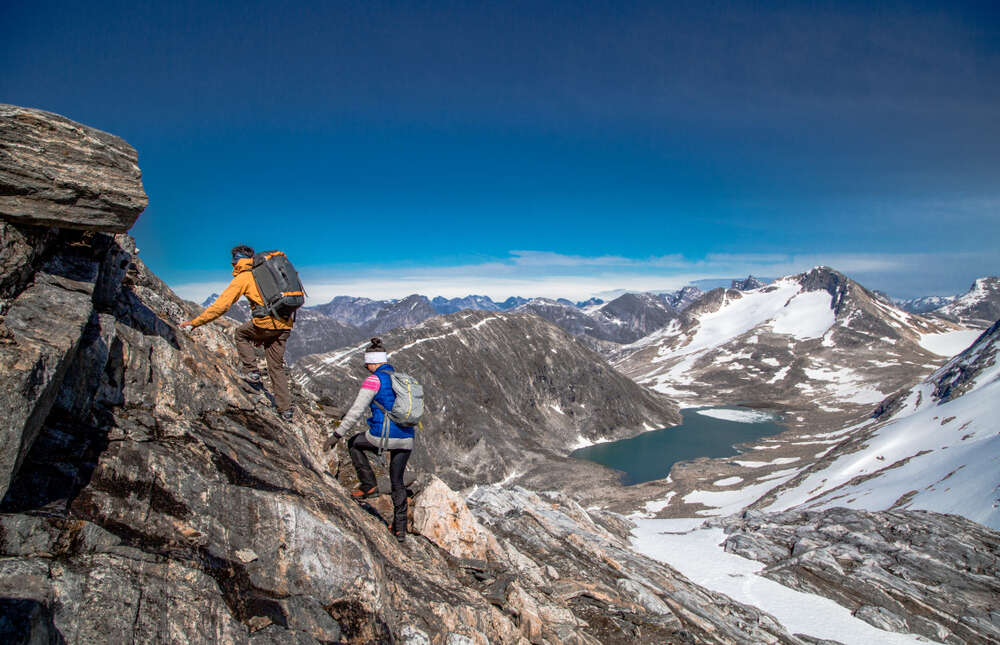 If you still want to go to the tundra zone, then consult local travel agencies and take suitable equipment for such outings. Be sure to hire a guide on the tundra, stock up on food and water, take maps, radios and warn rescue services or the tour operator of your route safety in such situations is paramount. 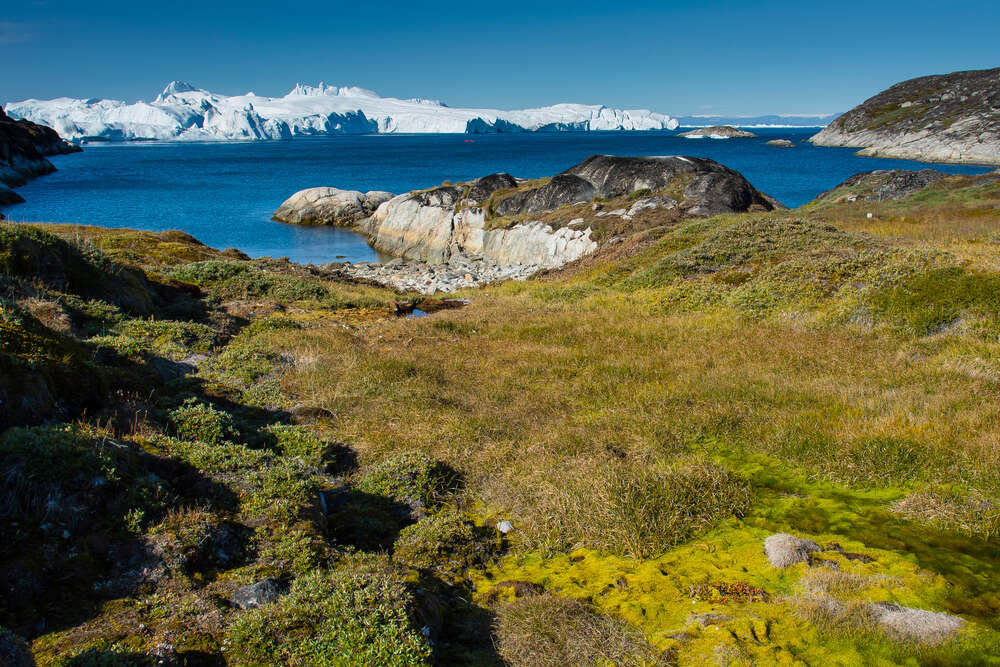 For photo lovers have their own restrictions. In Greenland, you must bring UV filters, lens hoods and special lenses to take pictures. An important point on the island is quite cold, so the camera needs to be heated. Also buy special lens lubricants that work in the cold. 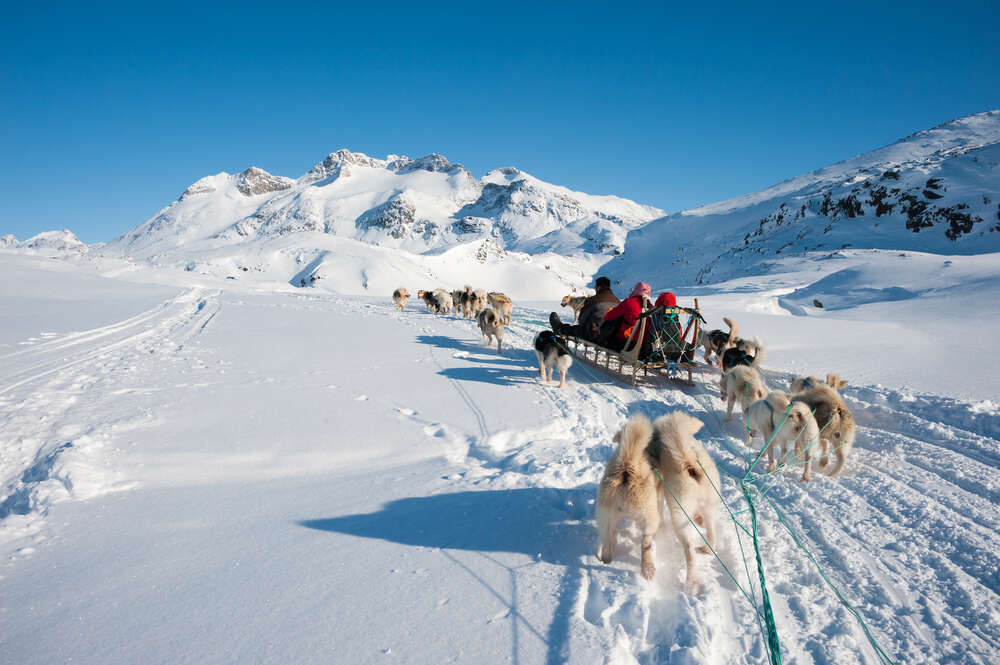 If you’re wondering if it’s worth going to Greenland, the answer is definitely yes! At the very least, the brightest northern lights are worth it. And for tickets, contact Travellizy.