In writing the story of the bestselling Seville, they have created more than a landmark, they have composed a miracle: the Plaza de España (Spain Square).

From the city of narrow streets full of shadows, your feet will inevitably lead you to the neglected, but therefore more romantic, Parque Maria Luisa. Rare trees and flowers from all over the world will accompany you for a kilometer. Cobblestone paths, whimsical flowerbeds, unexpected waterfalls, numerous fountains decorated with tiles and Moorish-style terraces blend seamlessly into the rich botanical garden.

Breathing in the scent of the orange grove, being in absolute nirvana, one suddenly finds oneself in the Plaza de España.

At this moment, even an experienced traveler feels catharsis. And here one realizes that the purpose of the garden is preparatory. No one can restrain his rapture at the sight of the majestic panorama.

On an area of five soccer fields is a semicircular palace of dark red brick, with endless arcades, passages and galleries – it recalls all the temple architecture of ancient Greece and Rome. Rounding out the 200-meter gallery of arches and columns are the North and South Towers. Each of them is 35 meters high and fulfills not only a decorative function, but also a utilitarian one, being both a water reservoir, a wireless telegraph and a lightning rod. In addition, being tall enough for Seville and serving as a kind of reference point for the inhabitants of the city.

Following the curves of the facade, slowly stretches along the embankment 500 meters long canal, called among the people “Venice of Seville”. It is crossed by four bridges, symbolizing the four archaic Spanish kingdoms – Castile, Leon, Aragon and Navarra, decorated with tiles of Andalusia, adopted by the Spaniards from the Arabs in the XV century. All the azulehos ornaments on the ancient ceramics can be viewed closely while rowing under the bridges.

READ
The Bronze Horseman Monument to Peter the Great in St. Petersburg

You can admire the bright cheerful colors of handmade glazed tiles comfortably lying in a boat, swaying slowly on the water. Unlike the Portuguese blue and white azulejos, the Spanish azulejos will give you fabulous creatures, lush floral ornaments, and geometric decorations in all colors of the rainbow. Tiles are also tiled all the “U” shaped “benches”, along the main facade of the palace.

The benches are arranged in alphabetical order and each symbolizes one of Spain’s 48 provinces with traditional allegorical paintings and characteristic ornaments.

The floor, walls, panels, and platforms around the benches are woven with terra cotta tiles, giving the uninitiated a historical and geographical reference. A map of the provinces, particularly important historical events, coats of arms, made to order by masters and artists of the province to which the bench is dedicated. Today, any Spanish family who has visited Andalusia has in their archives a photo taken on “His” bench.

Opposite the square, a monument to its creator, Aníbal González, was erected after restoration in 2010. In love with the Italian Renaissance, in his imagination he mixed everything Seville was proud of: baroque, mudejar, art deco, brick and wrought iron, marble, stucco and painted ceramics from the city’s potteries. Gonzalez’s project was threatened twice. First, the Royal Academy of Fine Arts opposed the planned height of the two towers, finding them “costly, unnecessary and in general not very beautiful, breaking the cityscape.”

Then the French landscape architect Jean-Claude Nicolas Forestier, the author of the park adjacent to the square, got into the fray. Because of the serious lack of water in Seville, he objected to the lagoon on the square. And if Gonzalez had been more cooperative the project would surely have lost its main romantic canal. However, in Gaudí’s Seville fantasy, the water would have carried an exact replica of Christopher Columbus’s ship. His dreams proved so alluring that in 1912 the Executive Committee of the World’s Fair approved the plan conceived by the architect. The cost of Gonzalez’s monumental work defies estimation.

The architect was never able to make a realistic budget. For 19 years the square took enormous sums out of the royal purse: the cost of a working design of 600,000 pesetas managed to exceed 17 million in its final stages. At a time of widespread ruin, such spending was staggering. However, the talent of craftsmen, artists, artisans who worked on the construction of the Spanish showcase allowed the country in 1929 to shine at the World’s Fair and once again reminded of the former greatness of the state. The architect, however, died before he could see his brainchild. Steadily continuing the tradition of absorbing funds, the Plaza de España is setting records decades after its debut. In 2010, €21 million was spent on renovations, and now Seville’s “selfie arena” boasts new street lights, an updated 500-meter balustrade, tiles on 22 benches, and 900-meter pipes that provide water to the canal.

Today the square is open to the public at any time of the day or night. It is a delight for filmmakers the world over. A perfect setting for the Lawrence of Arabia scene, and an indispensable setting for the Queen of the Planet Naboo from Star Wars, played by Natalie Portman.

Plaza de España (Seville) is often referred to as one of the most beautiful urban forums in Western Europe. Reflecting the uniqueness and grandeur of its country, it looks more like an ancient palace complex than a structure built at the beginning of the 20th century. 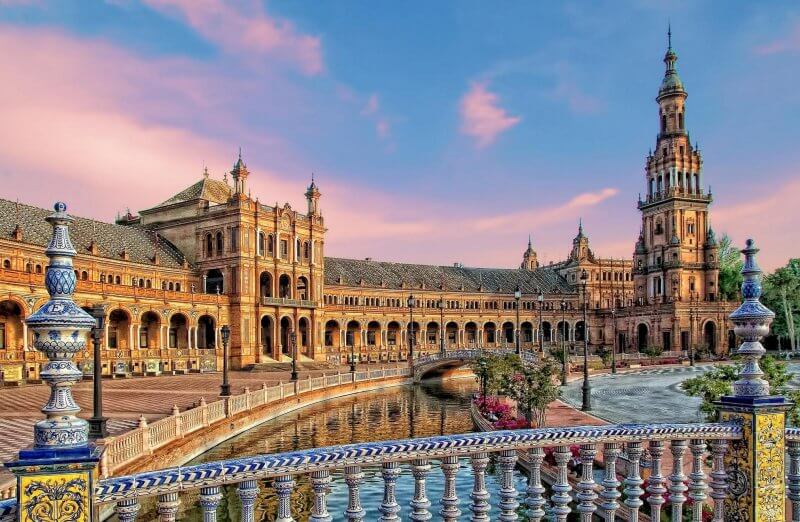 Plaza de Espania is a grand architectural ensemble, built in the south of Seville especially for the Ibero-American Exposition. It is a direct extension of Maria Luisa Park and, unlike it, does not close at night and does not require the purchase of an entrance ticket.

The first stone of the square was laid by King Alfonso XIII back in 1914 and the main leaders of the project were the famous Spanish architects Anibal Gonzalen, Jose Casso and Aurelio Milano.

The construction of this facility lasted a full 14 years and ended exactly one year before the anticipated event. At the time of the official opening, which took place on May 9, 1929 in the presence of the highest representatives of the city authorities, the project was almost fully consistent with the original idea. The only exceptions were minor changes in the functionality of the buildings and a reduced number of decorative bridges (only 4 instead of 8). 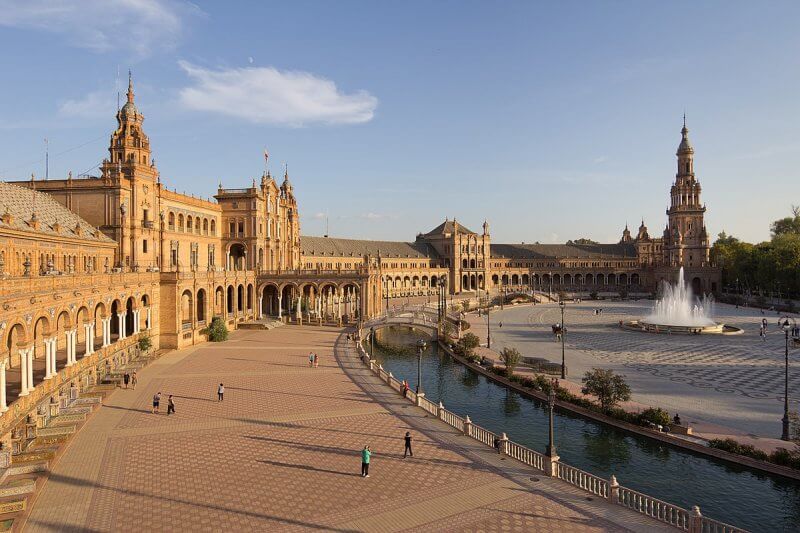 At present the Seville forum, for the building of which about 17 million pesetas have been spent, is one of the most famous attractions of the city and the most beautiful squares in Western Europe.

Plaza de Espania is a grandiose semicircular structure with a diameter of almost two hundred meters. The form of the forum was not chosen by chance and has a clearly symbolic meaning. According to the idea of its creators it is the Spanish Kingdom itself, one side of which hugs its overseas territories, while the other looks inquisitively towards the New World.

In the center of this architectural composition is a huge fountain, and on the perimeter – a beautiful semicircular building, which during the exhibition was the pavilion of state industry and technology. After reading the interesting facts about the Plaza de España in the city of Seville, we can understand that the main characteristic of this structure is the application of two styles – Art Deco and Mudejar, an original local style that combines Arabic, Gothic and Renaissance techniques.

As such, the upper part of the structure is in the classical style, while the lower part is divided into several niches symbolizing the Spanish provinces. They are all placed in alphabetical order and contain not only the coat of arms and map, but also some monument or historical moment characteristic of a particular colony. These alcoves, lined with ceramic tiles of azulejo with an elegant bright blue pattern, can be without exaggeration called the most unusual element of Plaza de Espania. The final elements of this building are two baroque towers rising as much as 74 meters above the city streets. 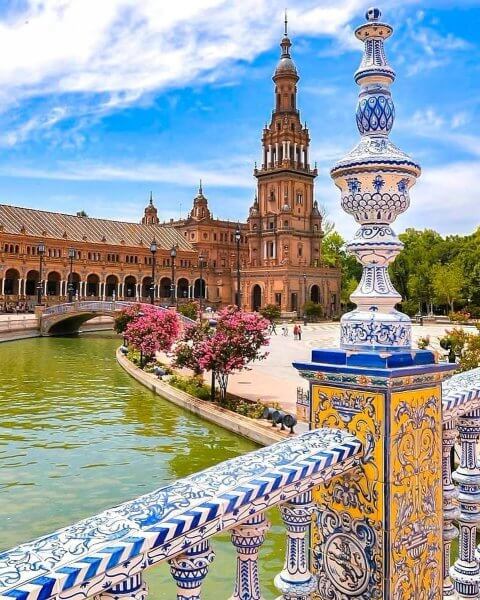 Right in front of the pavilion, exactly repeating the curves of its facade, there is a picturesque canal with a length of almost half a kilometer and a depth of up to 1.5 m. As in Italian Venice here you can rent a small boat and take a romantic walk around the surroundings. For the convenience of tourists all around the forum are placed wrought iron benches symbolizing the 46 mainland provinces and two archipelagos (Canary Islands and Balearic Islands), part of the Spanish Kingdom. There are also a lot of covered galleries, terraces, pavilions, decorative railings, unusual lanterns and massive stone columns creating a Renaissance atmosphere.

On the other side of the forum is a huge city park with a picturesque Moorish garden and a promenade. Both elements also appeared shortly before the opening. In 2010 Plaza de Espania in Seville underwent a major renovation, during which more than 20 elements of cast iron and ceramics were restored. Another year later, a small gazebo and a monument to Aníbal González with granite foundations were installed on it.

What is in the buildings today?

At the end of the Exposicion Iberoamericana-1929, there were plans to house several buildings of the local university in the exhibition buildings built on Plaza de Espania. But these plans were never fulfilled. The military government first settled there, and soon the city hall and some of the city’s museums were located there. Besides in one of the premises of the square was located a small but very popular theater. 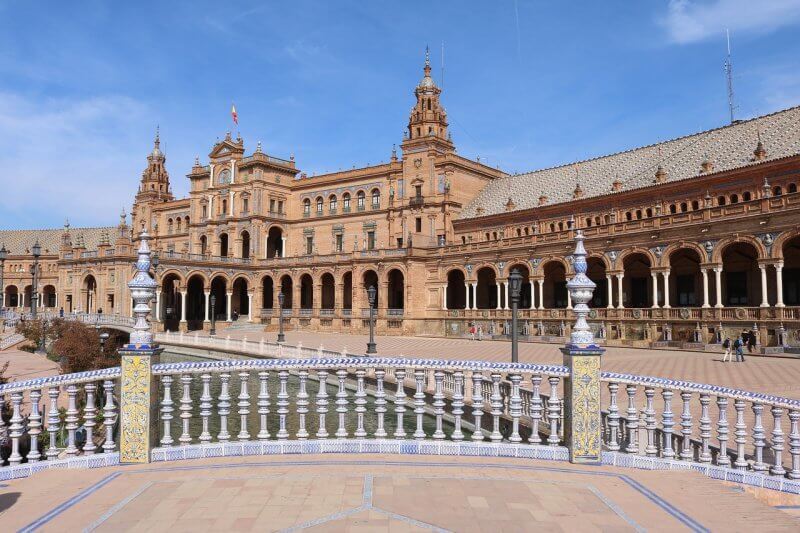 There are several other facts in the history of the Seville forum that deserve the special attention of visitors:

READ
The Pyramid of Austerlitz, detailed description and photos

Walking through the Plaza de España:

Updated: 27 Jan, 2020 Seville Cathedral is the largest cathedral in the city,…

Updated: 2 Aug, 2020 One of the most picturesque and popular resort places in…

Updated: 21 Dec, 2019 Volcano Teide on the Spanish island of Tenerife is one of the most…