Porto Flavia was once an unusual port on the southwest coast of Sardinia, the second largest island in the Mediterranean Sea. In fact, it was a small hole in the limestone cliffs above the sea, leading directly to the mines of the town of Masua. 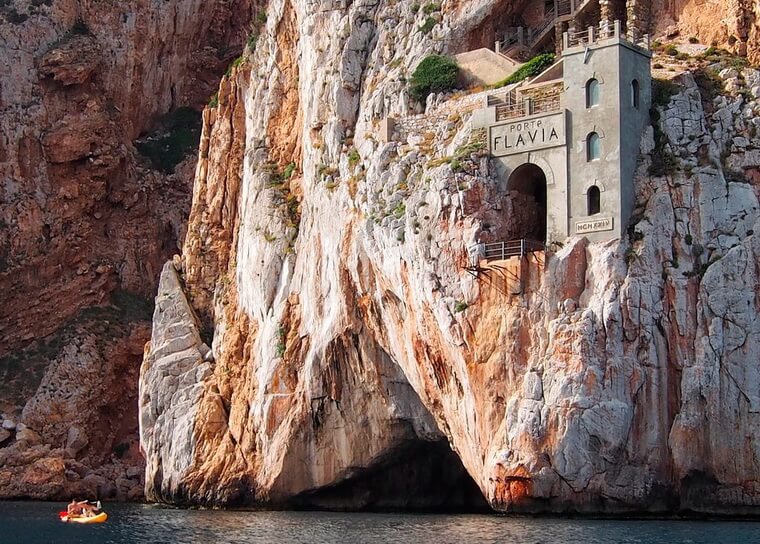 The mines produced zinc, lead and other minerals, including silver. The ore was carried through a 600-meter tunnel by conveyor belts to the mouth of the tunnel. A mechanical arm then loaded the ore directly onto seagoing vessels. The ingenious harbor was built in 1924 by engineer Cesare Vecelli. He named it Porto Flavia after his daughter Flavia.

Porto Flavia is located near the town of Masua in the municipality of Iglesias in the southwestern part of the Italian island of Sardinia.

Why Porto Flavia was built

Before this harbor was built, ore had to be transported from the mines to the seashore. This was done by hand – the ore was placed in wicker baskets and carried on the shoulders into traditional Sardinian boats.

It is an interesting fact that such a boat could hold up to 30 tons of ore.

The ore was transported to the island of Carloforte 30 kilometers to the south. Gradually, it was filled into the holds of steamboats and transported to foundries in France, Belgium and Germany. The process of loading the ships was expensive, slow and dangerous. Boats loaded with ore often sank in rough seas. In bad weather, it took up to two months to fully load a steamboat at Carlofort. And even in good conditions, the ship was loaded with ore for at least seven days.

In 1922 the Masua mines were bought by the Belgian Vieille Montagne Company. The owner of the mines asked the Italian engineer Cesare Vecelli to find a solution that would reduce the time and cost of loading the ore on steamships.

Vecelli surveyed the coast of Masua and found an ideal spot high in the cliffs opposite the island of Pan di Zucchero. 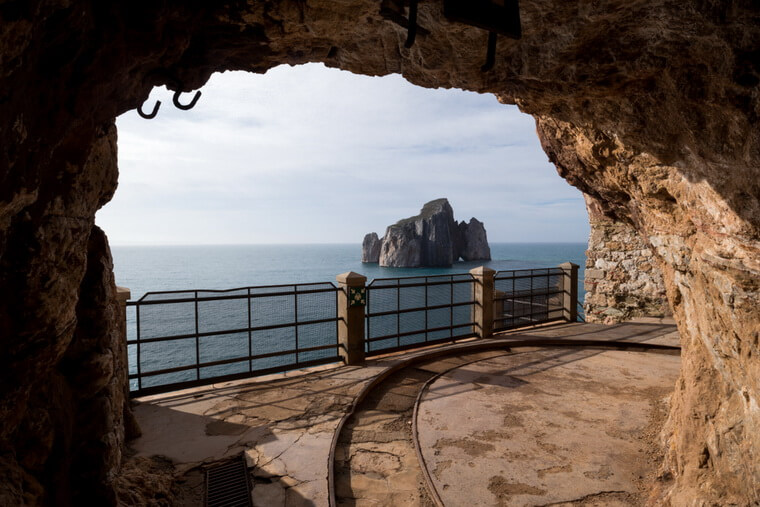 Here the sea was deep enough for ships and well protected from wind and waves to allow safe mooring, while ore could be shipped right off the rocks. 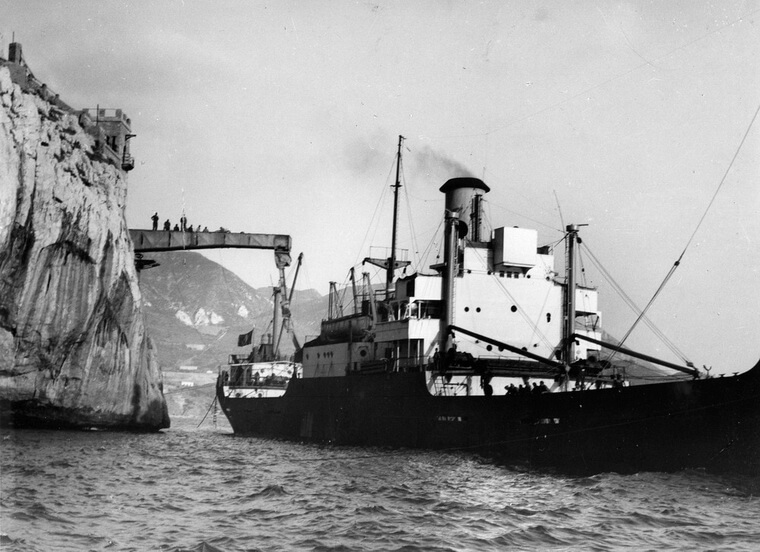 The Vechelle structure consisted of two tunnels underneath each other. Each was about 600 meters long. The tunnels were connected by nine huge vertical tanks for the ore to be processed. 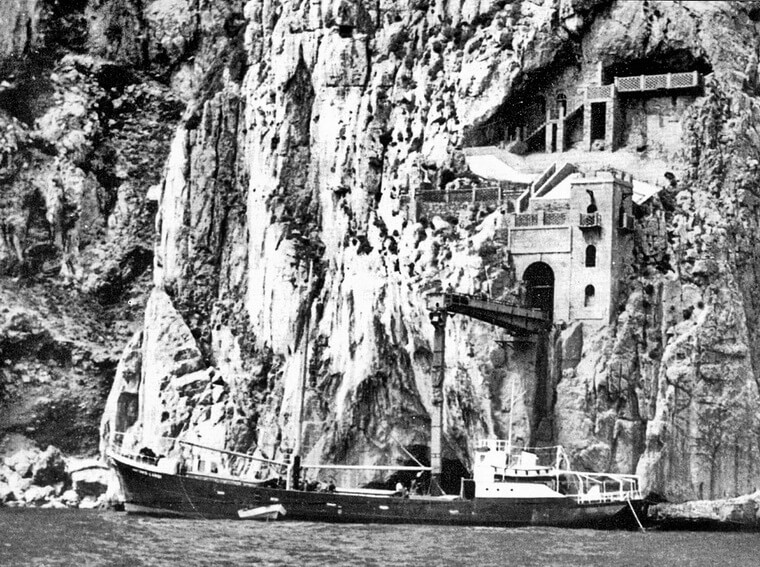 The tanks were carved right into the rock and could hold over 10,000 tons of ore. Each tank was 4 to 8 meters in diameter and 20 meters high. 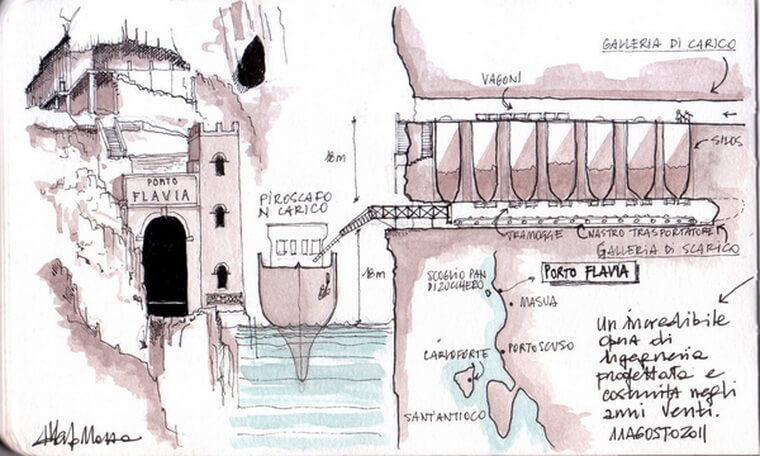 This is roughly what Porto Flavia looked like schematically

How was it built?

A special team of rock and explosives experts worked day and night to complete the construction in record time.

The workers began drilling the upper tunnel, 37 meters above sea level, using dynamite and mechanical drills until they reached the sea. Then they hung from ropes and began to drill the lower tunnel from a cliff, 16 meters above sea level, in the opposite direction below the upper tunnel. In this way they dumped the removed rocks directly into the sea. Finally, the reservoirs were built by creating holes in the basalt rock, starting at the bottom and going upwards. This again made it easier to remove the rubble, although such a procedure was very dangerous.

Interesting fact – Although safety precautions were virtually ignored during the work, no casualties were reported during construction. But during the construction of the famous Panama Canal, more than 20,000 people died. 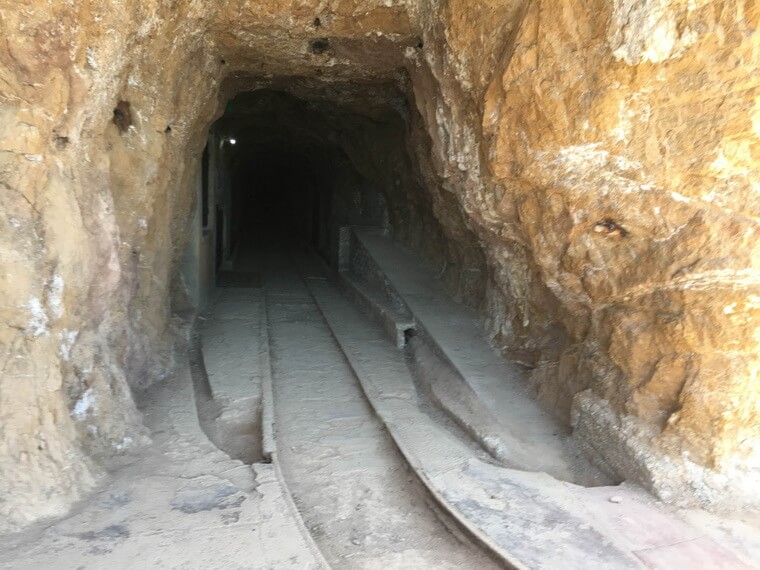 The Upper Tunnel of Porto Flavia

Construction took only two years and ended in 1924, which was a very short period for a job of this magnitude. The tunnel exits facing the sea were decorated with concrete towers and decorative nameplates. By and large they were unnecessary to the operation of the port, but they were asked to be built by the owner of the company as a sign of prestige. 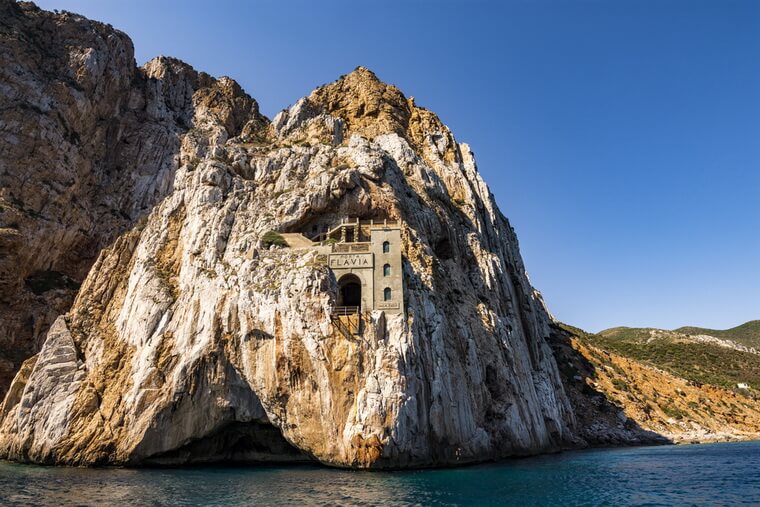 Porto Flavia. View from the sea

Under standard conditions, the loading dock could deliver more than 500 tons of ore per hour to the ship. The steamer was now fully loaded in about two days.

Construction of Porto Flavia paid for itself in less than two years and was considered a technical marvel in mining. The opening of the new loading terminal left many sailors from Carloforte out of work, hurting the economy of the nearby islands.

Working conditions at Porto Flavia were much better than at the mines. But there were dangerous parts of the job as well. For example, one of the most risky tasks was performed by the so-called “Death Brigade” (Squadra della Morte). A group of workers descended on ropes inside the tanks and dislodged the stuck ore.

The importance of Porto Flavia declined in the 1960s after the decline in mining. Porto Flavia also closed in the 1990s, following the closure of the mines. Today the site is protected by UNESCO and is visited by tourists. 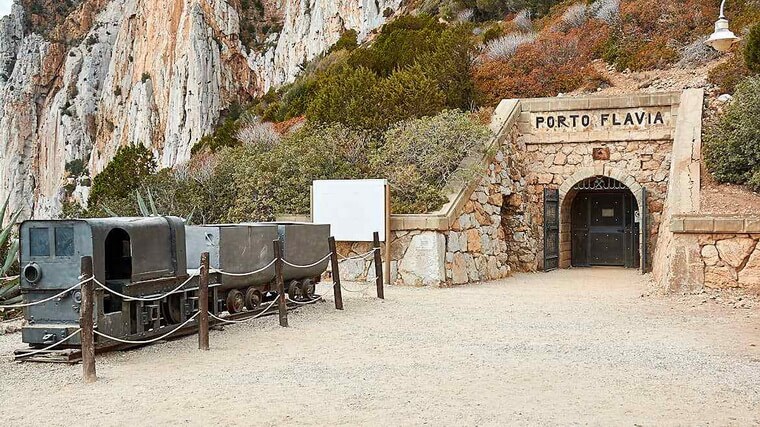 This technical attraction belongs to IGEA SpA, a company that preserves old mining sites. Tours are held every day in the tunnel led by former workers or mining technicians.

You are curious, nimble and on vacation in southern Sardinia. Perhaps you’ve already checked out Cagliari. Or maybe you’ve already seen the nuraghe and the caves of Iz Zuddas. And what else can you find here so interesting and unusual? And here it is – the mines of Porto Flavia.

A trip to the mines of Porto Flavia will be of interest to both adults and children, because there you will

Porto Flavia is 70 km from Cagliari. The direction is the villages of Nebida and Masua. By the way, these are former mining settlements that are today in a semi-abandoned state and only come to life in the summer.

A panoramic mountain road along the coast leads you to the small beach of Mazua. From there, a dirt road leads to the mines of Porto Flavia, and you will find parking spaces along the dirt road. I don’t recommend walking from Mazua Beach to the mines – it’s long and hot.

READ
Trevi Fountain - the most famous fountain in Rome. Italy

The best time to visit Porto Flavia is April-May-June or September-October, the best days of the week are Monday through Friday. On Saturday and Sunday, as well as in July and August, it can be very crowded.

In the south of Sardinia there are many mines, founded during the Roman Empire!

In the late 19th-early 20th century, it supplied Europe with huge quantities of zinc, lead, silver and coal.

And in the mid-20th century, the mines had to close for unprofitability, it turned out that the cost of production of the same minerals in China and South America is much lower than in Sardinia.

In our days on this territory was created geo-mineralogical park, part of which is Porto Flavia.

The tour of Porto Flavia mine lasts 45 minutes. The cost of admission tickets is 10,00 euros per person.

It is always cool inside, so it is best to bring a light sweater. Helmets will be given to you at the entrance. Do not worry about hygiene, the helmet comes with a disposable cap.

Inside the mine tunnel you will find scenes from the life of miners, the history of mining in Sardinia, deep silos where minerals were dumped, and photographs of the mine in its economic heyday.

By the way, why is the mine called a port? That’s what makes it unique!

Porto Flavia is not just a mine, but a real port.

Ships on which minerals from the south of Sardinia were unloaded were moored directly to the rock on which you will emerge at the end of the tour of the mine. That’s why, it was called “porto” – Flavia’s port.

And Flavia was the name of the little girl, the daughter of the chief engineer who designed the mines, silos and port. And even if today only quiet empty tunnels are left of the former scale, the name of this little girl still graces the entrance to the mines.

And getting to Sardinia is easy-peasy. In 2020, S7 Airlines will fly from Moscow to Cagliari 4 times a week. In just 3.5 hours, you are no longer there, but here. Enjoy your trip to Sardinia!