The amazing Praya Nakhon Cave is one of the most photographed caves in Thailand. What makes it particularly charming is the beautiful little pavilion built at the bottom of the cave. It is believed to be the smallest temple in Thailand.

Phraya Nakhon Cave is located in the center of Khao Sam Roi Yot National Park just south of the resort town of Hua Hin on the west coast of the Gulf of Thailand. The cave is located in Thailand’s Prachuap Khiri Khan province Geographic coordinates 12.195980, 100.011748

It is said that 200 years ago a Thai man named Chao Phraya Nakhon Sri Thammarat discovered the cave while trying to escape the rain. Gradually the cave was named after the discoverer, Praya Nakhon.

The cave consists of two rooms.

In the first one you will see the so-called dry waterfall and the classic stalactites and stalagmites. 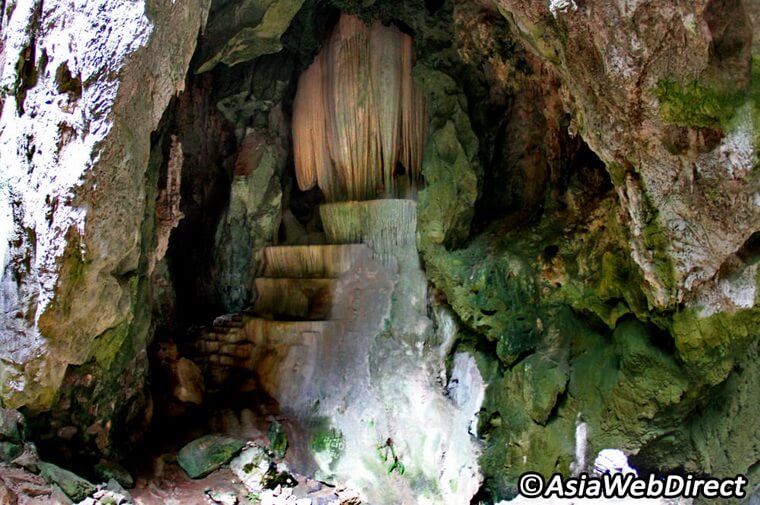 This “waterfall” is reminiscent of the stone waterfall of Irve el Agua in Mexico.

The first cave has a hole in the ceiling, which appeared after an earthquake. 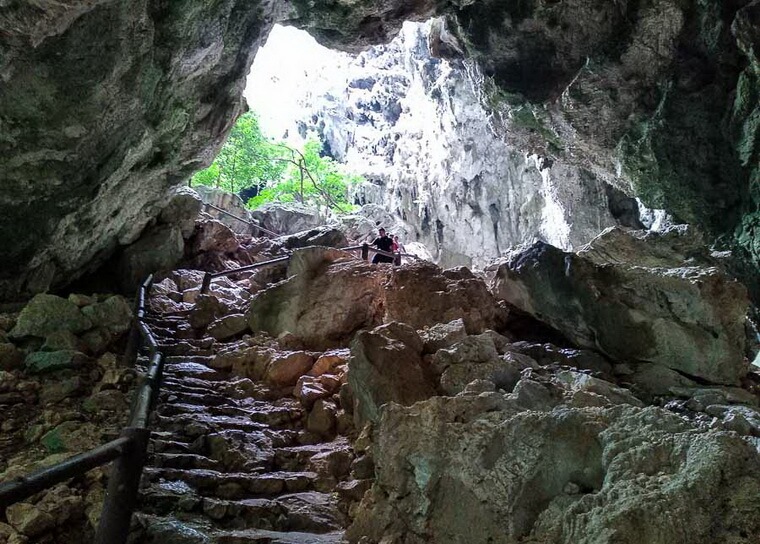 Here too, after the earthquakes, the ceiling of the cave collapsed and sunlight started to enter, which gave life to the plants.

It is here that you will see the main attraction of the cave, a temple on a small hill surrounded by lush vegetation.

The magnificent Kukha Karukhas Pavilion is designed in gold and green colors that harmonize beautifully with the surrounding cave. It is this pavilion that made the cave famous. 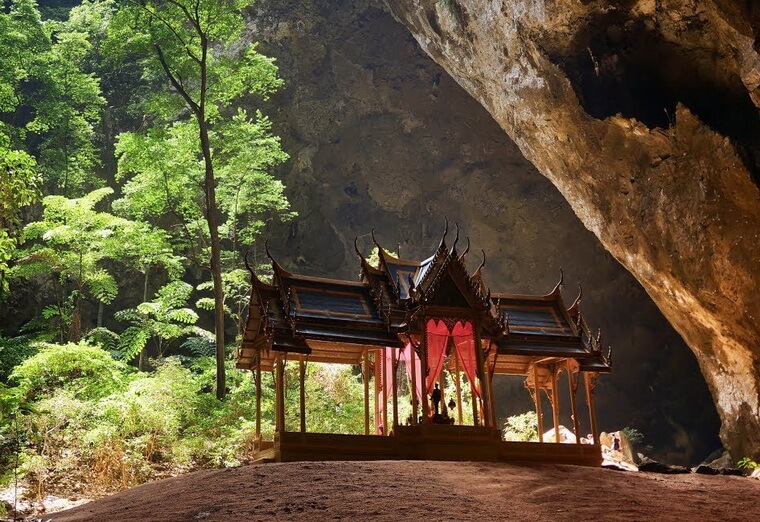 Kuha Karuhas Pavilion. He is also a temple.

In 1890, to celebrate the visit of King Chulalongkorn (Rama V), this pavilion was built on the floor of the cave. It was built so that the morning light would illuminate the pavilion as much as possible, creating an incredibly contrasting landscape.

It has since become a landmark in the province of Prachuap Khiri Khan. On the wall of the cave are inscriptions made by Kings Chulalongkorn (Rama V) and Prajadipoka (Rama VII). The recent King of Thailand, Pumipol Adulyadej (Rama IX), also visited the cave, but did not leave any inscriptions on the wall.

How to get to Phaya Nakhon Cave

First you need to get to the small village of Bang Pu. It takes about 45-50 minutes to get from Hua Hin. On the way you will enjoy great views of beaches, mountains, and forests.

From there, go to Laem Sala Beach either by boat around the promontory or on foot over the hill. The walk will take you half an hour for free, but by boat you have to pay 200 baht, but the travel time is about 7 minutes. If you have time, it is better to walk, since you will have great views along the way.

On the beaches of Bang Pu Village and Laem Sala you will find good cafes and restaurants.

From Laem Sala Beach follows a challenging 500-meter hike up uneven and steep steps through the jungle. The ascent is quite steep and takes about 30 minutes. 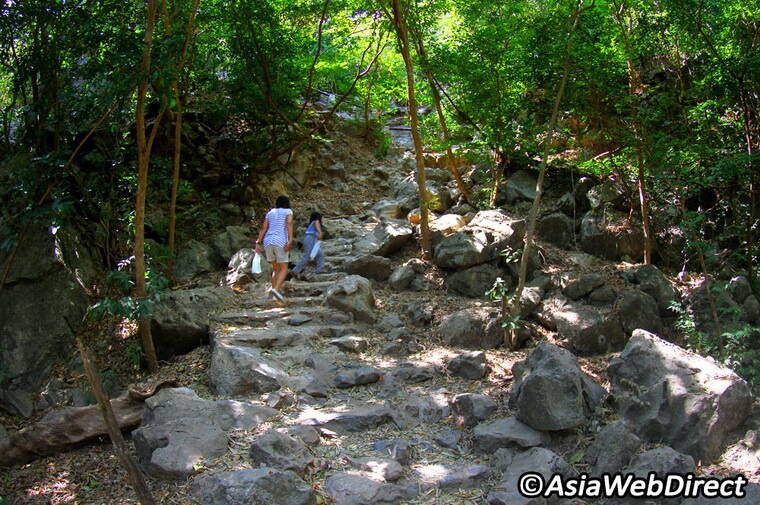 The path to Praia Nakhon Cave looks like this

Make sure you have good shoes beforehand and take your time, as there may be slippery rocks along the way. Take plenty of water and insect repellent.

This cave is quite a sightseeing place. That is why many tourists flock here.

If you want to stay in the area, you can rent family bungalows at Laem Sala Beach. Visiting the cave on weekdays is a great way to avoid the crowds and enjoy the magnificent view in peace. But on holidays and weekends there are quite a lot of tourists.

At the entrance to the park will have to pay 200 baht. You will definitely be offered a guide. And often it will be local children who are well versed in the surrounding trails.

The best time to visit the caves is in the morning, when the sunlight penetrates and fully illuminates the pavilion at the top of a small hill.

Depending on the season, the sun illuminates the temple in the morning from about 10-00 to 10-30. The rest of the time, the scenery is less colorful.

Praya Nakhon Cave is located in Khao Sam Roi Yot National Park. The trip to the cave will take all day and although it does not require much physical preparation, you’d better be mentally prepared for the grueling climb up. Don’t worry, both children and elderly people can make the climb, but more about that below.

READ
Mayon Volcano is the most active volcano in the Philippines 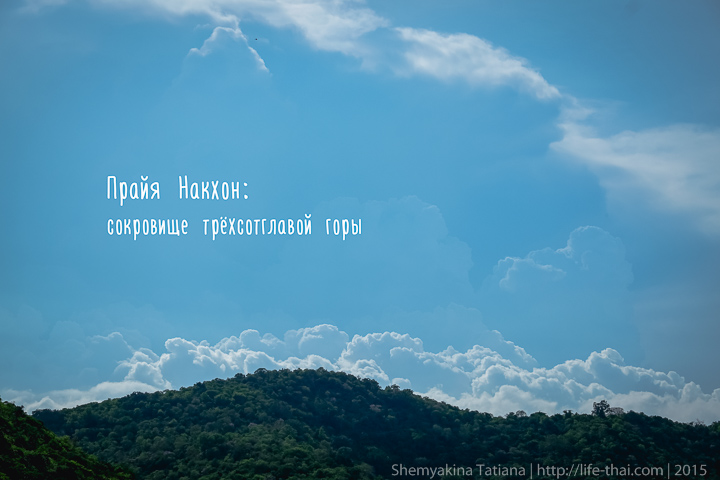 Getting to Praia Nakhon Cave

There are only two ways to get to the national park:

I advise you to check the prices on the Kluk website first, and then from the Thais. There are often discounts on the website, and it’s cheaper to buy online than trying to bargain for a discount from the Thais on the spot.

Going to Praya Nakhon on your own by bike – sightseeing itinerary

On the way to Phraya Nakhon Cave, there are several interesting places to stop. In general, the road is not difficult. This is how I described it in my journal:

We drove along a deserted highway. Occasionally oncoming cars passed by. On the right, angular mountains loomed, now approaching, now turning sideways. Somewhere to the left the sea waves were slowly lapping at each other, tossing shells on the beach. We drove toward the picture, found on Google maps, to see it for ourselves.

Getting to the cave from Hua Hin is simple: take Highway 4 to the intersection with Highway 1020. Take highway number 1020 and drive to the entrance to Khao Sam Roi Yot National Park. From there, it’s about 2.5 more kilometers to the crossroads. At the crossroads, turn left all the way to the end. Link to map with route.

It was hard not to notice the flat beds of thorny low bushes. If we hadn’t been to such a plantation in Sri Lanka, we would hardly have guessed that these were pineapples!

A Thai man was walking from the field, apparently on his way to lunch. His face was brown from constant tanning, his hat was wide-brimmed, and he had a big smile on his face. Pointing to the bushes, I asked, “Saparot?” The Thai smiled even more, “Chai, saparot, khab!” and began to explain something in Thai, waving his hands in all directions. Sometimes such chance encounters charge with warmth and kindness like nothing else. 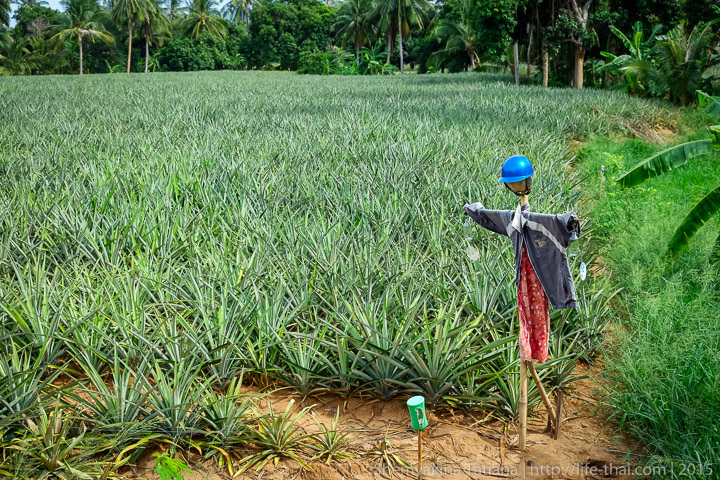 The coolest thing is that the plantation is not fenced in any way. There is no high fence with barbed wire on top. Come on in, look.

Next to one of the pineapple fields was a pen with curious lop-eared goats.

The grass behind the fence always tastes better

Even though the temple was out of our way, we decided to stop here. More for a tick than anticipating something interesting. But the temple was on a hill overlooking the winding Pranburi River. 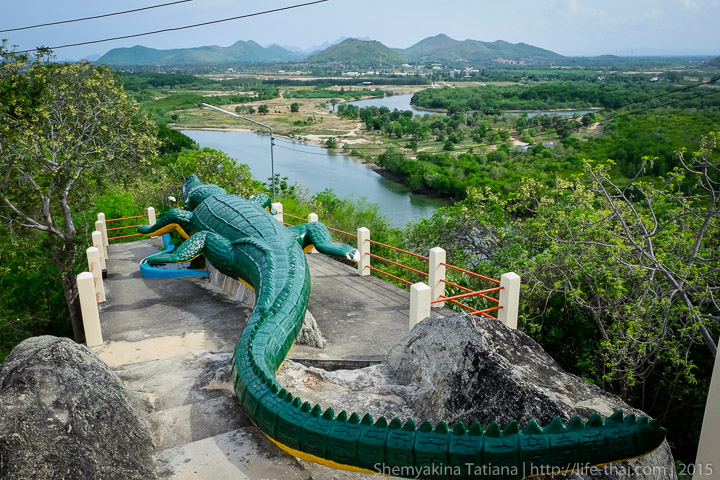 These are the views from the hill where the temple with the green crocodile stands. 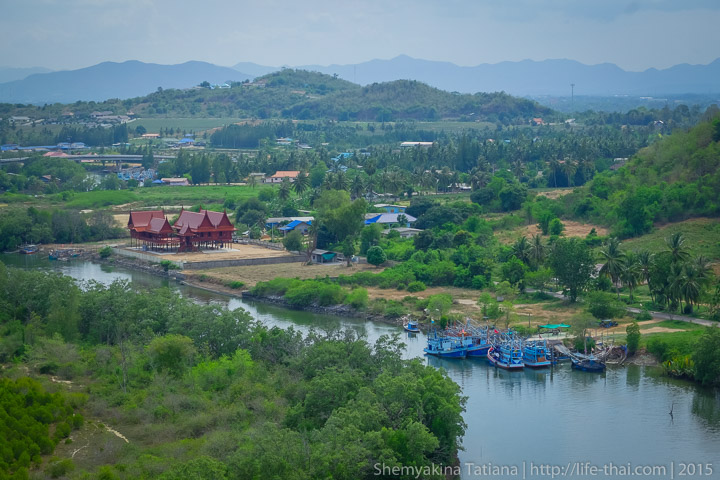 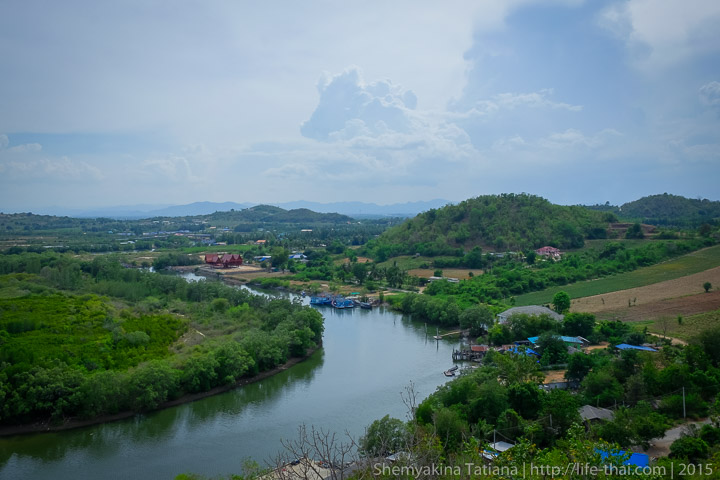 But this is not the only temple on the hill. To the left of the crocodile are white elephants. Behind them there is a passageway. At first glance, it looks like someone’s home. It is, but beyond that, there is a Buddhist temple. 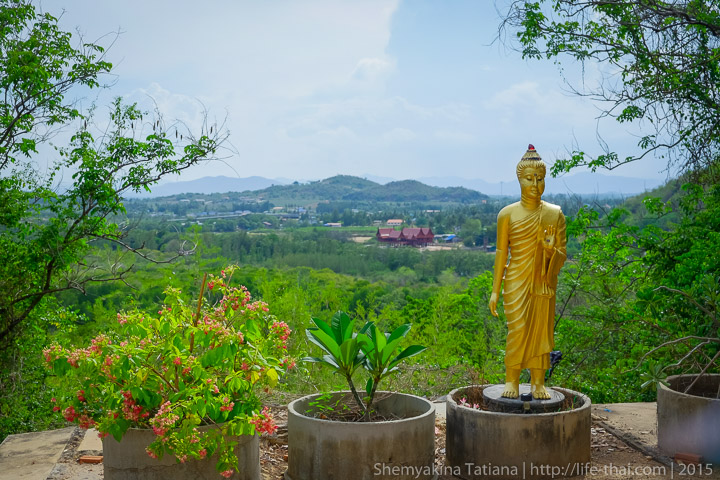 The local chickens were very surprised to see the uninvited guests. 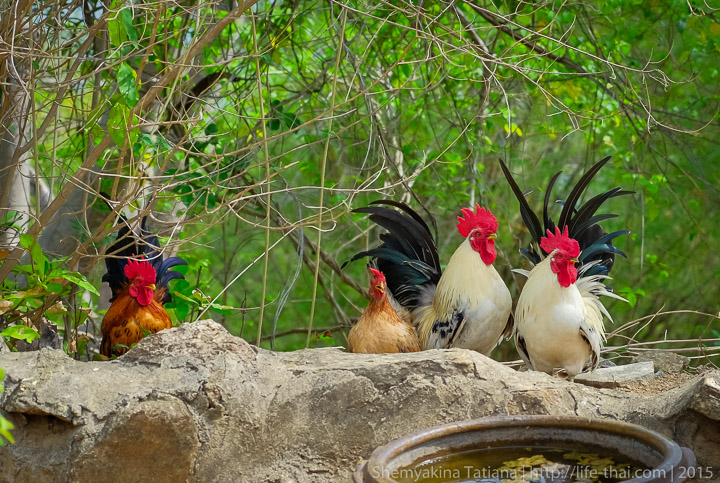 Behind the temple there is a stone ledge, huge. It feels like the edge of the world.

One dissolves on the road. Listening to the thoughts, listening to the breeze, getting absorbed in what you see. The serenity of the Thai outback is enchanting. We stopped to take a few pictures.

The name of the national park, Khao Sam Roi Yot, translates to “The Mountain That Has 300 Tops” or “The Three Hundred Head Mountain.

For a detailed article on what else to see in this national park: Khao Sam Roi Yot National Park – a challenging national park not for everyone

There are two ways to get to Phraya Nakhon Cave. The easiest is to take a boat to Laem Sala beach from which there is a direct access to the cave. For the stronger of heart, you can walk a kilometer-long pass that leads to the same beach with a half-kilometer-long climb into the cave.

There is a small viewpoint at the pass where you can admire the bay and the beach. Reminds me of Krabi, doesn’t it? 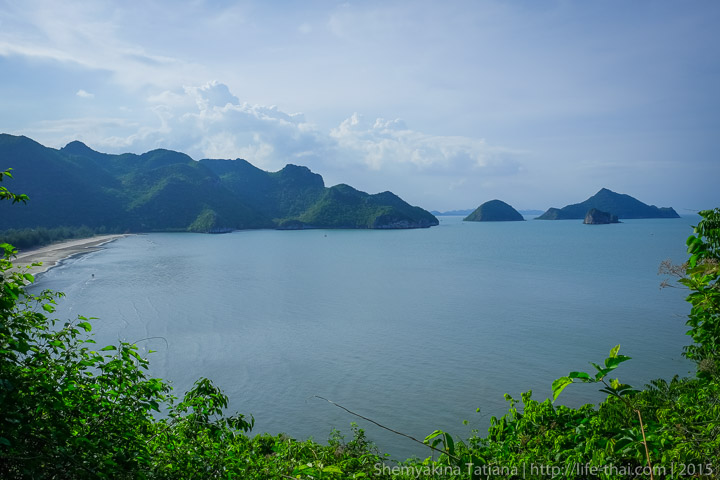 I read somewhere that Laem Sala beach is considered one of the best beaches in Thailand. Perhaps it’s about another Laem Sala. In general, all Hua Hin beaches look similar. 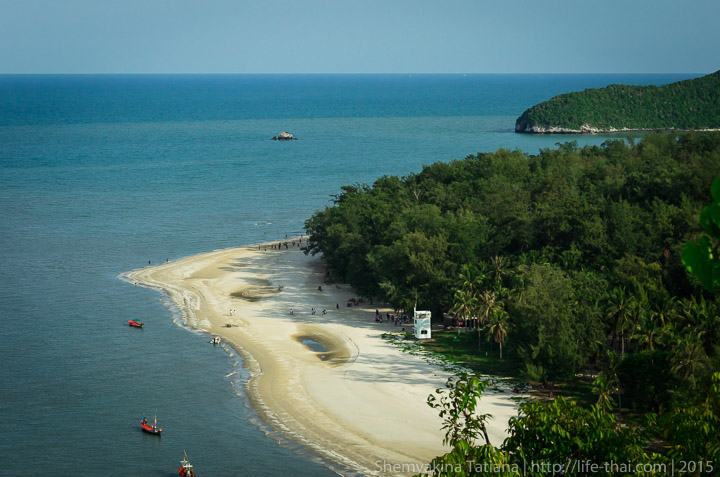 The climb up to the cave is, frankly, hard. The road through the pass is still okay, but the long climb requires willpower. But when the climb ends, and after a short descent you see it, the fatigue fades away. 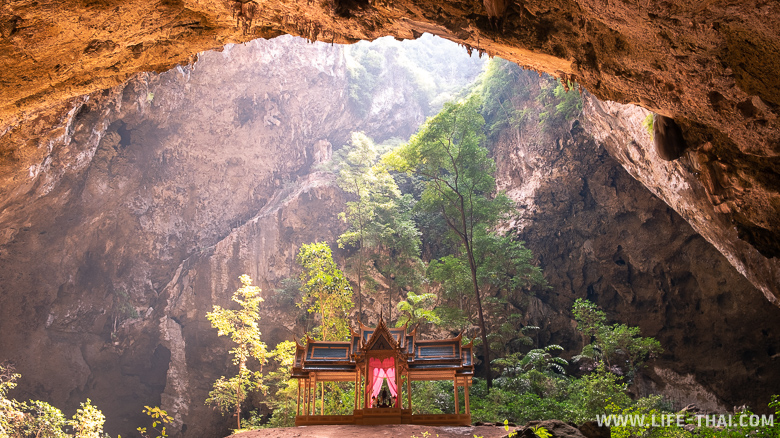 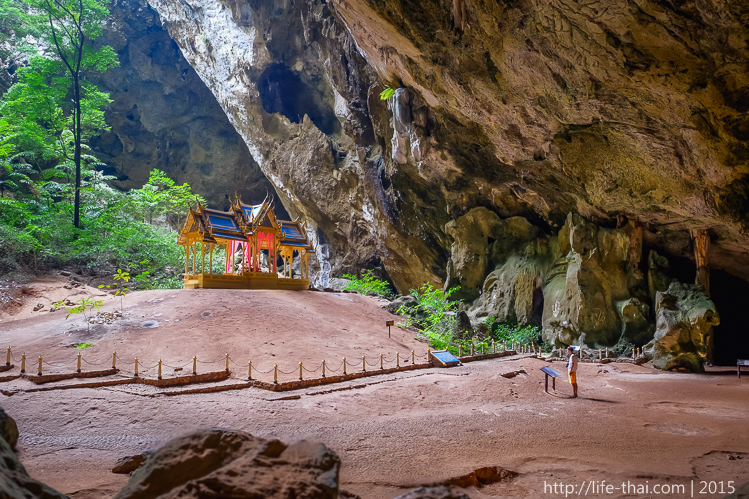 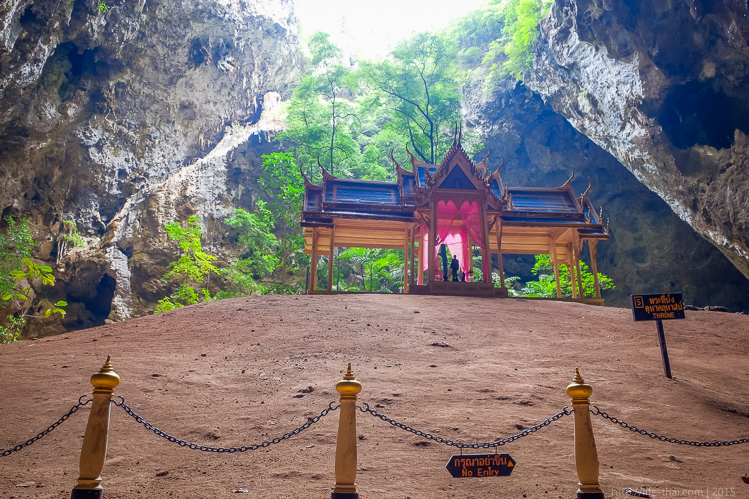 Only after a while do you notice that the cave is full of sounds. Bats squeak. Droplets of water fall from somewhere above.

The cave is huge, and everything in it seems mystical.

A pagoda in stalactite. 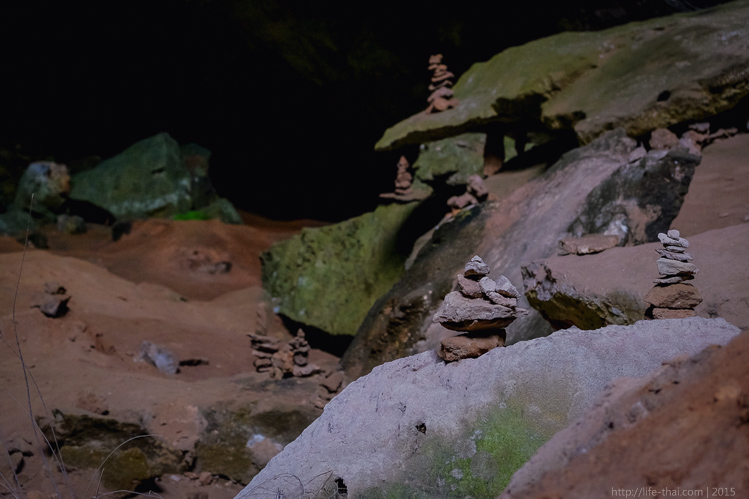 A huge stone, which, according to Thai custom, is propped up by sticks. 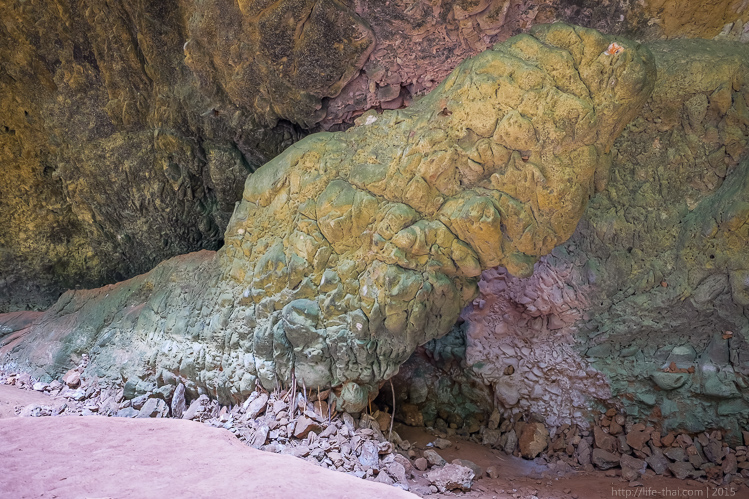 While I was rapturously photographing the stones, Igor shot a panorama of the cave.

It is difficult to convey the size of the cave through photography. So we decided to set the scale ourselves. Find me on the photo, I am one meter and seventy .

And here is a picture of two-meter tall Igor! 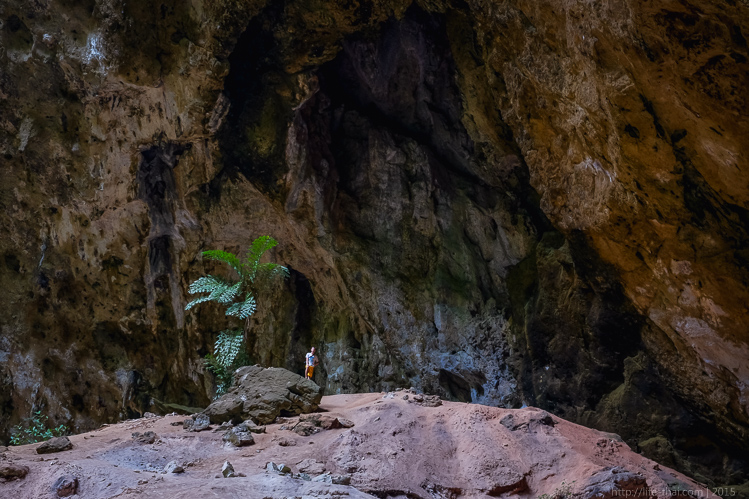 The cave is so impressive that it is definitely the best attraction to go to from Hua Hin.

On the way back from the cave, we caught up with a Thai family we had overtaken on the pass. They never made it to darkness. Didn’t pass the test. But when we were tired and sitting on the shore imagining how we would climb back over the pass, the Thais took off the boat and called us to come with them. The boatman, of course, tried to charge us money. But the Thai who rented the boat said several times that we were with them and the boat was already fully paid for. 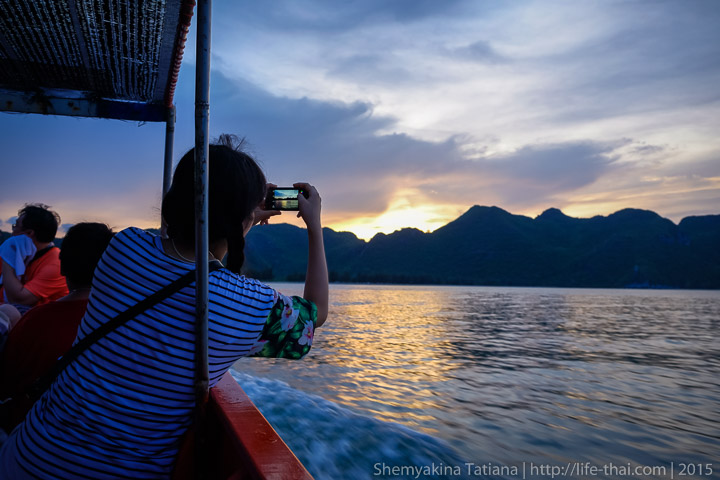 Do good, and good will come back to you.

Time in Thailand goes differently. The daylight hours are shorter here, and there are no long twilight hours. And where there are mountains, it gets dark even earlier. We needed to get to the cave before 5 p.m., but even 5 p.m. is too late to visit Praya Nakhon. So in Khao Sam Roi Yot National Park, we saw only the legendary Praia Nakhon Cave, although there are many interesting places in the park. It is better to come here with an overnight stay.

Background information about the National Park on the official site

All routes with sights in Hua Hin:

Hi, my name is Tatiana, and I’m happy to see you on the Life is Unpredictable! blog. I love to travel, and on the blog I share my experiences, tips and other helpful notes.