The longest waves in Puerto Chicama

On the shores of the Pacific Ocean in northwestern Peru is the small town of Puerto Chikama. This unique place is known for the fact that its coast has the longest sea waves in the world.

It is worth making a small clarification. Here, by the length of the wave we mean the distance traveled by its crest, but not the length of the crest itself (although this value is also impressive). That is, if you are a surfer, then standing on a board and riding a wave in Puerto Chikama, you can roll on it for a few minutes and a few kilometers.

The town is located on the desert coast of the Pacific Ocean, 70 kilometers north of the city of Trujillo and 600 kilometers from the capital Lima. 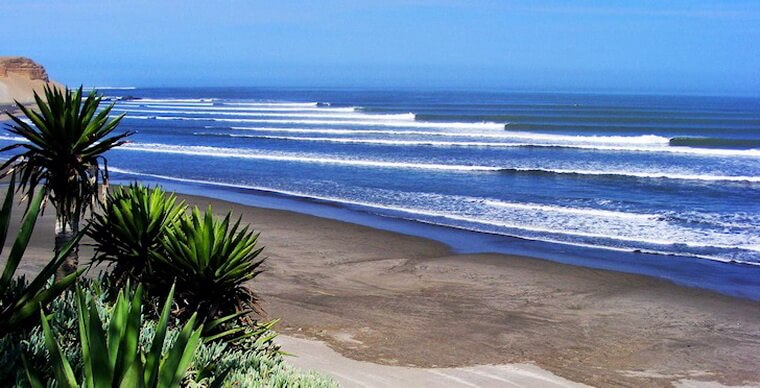 Factors of formation of long waves

The appearance of such waves is caused by the cold Peruvian current that washes the Peruvian coast from south to north, the direction of air masses and the topography of the coastline in this place.

Usually the wave height does not exceed two meters, and the waves follow one another like a ruler, almost never merging. Waves less than 1 meter in height are usually slow and weak.

The longest and most optimal left-handed waves on the planet are formed here. The wave here travels a distance of over 4 kilometers from the rocky headland of Malabrigo to the pier on the coast.

History of the discovery

Flying over here in an airplane, Chuck saw a very long left-handed wave. The pilot told him more about the area. Back in Hawaii, Shipman began to study maps of Peru and the peculiarities of the local wave formation.

After identifying some promising shoreline areas, Chuck contacted his friends in Peru and asked them to explore the coast “live. It’s worth noting that the first attempt to find the way to the shore was unsuccessful, but a little later the path was found. Since then, Chickama has been a popular destination for surfers. 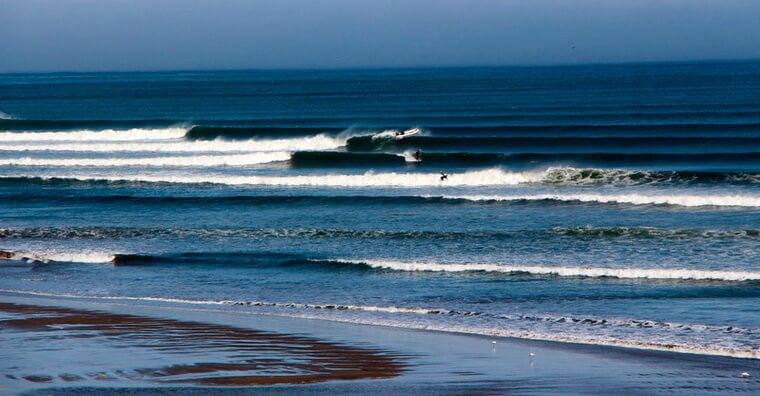 Features of the Chickama wave

The wave is commonly divided into several sections. The outermost point near Cape Malabrigo is called “Malpaso,” followed by the Keys point. Few people ride these sections.

The next point is so called “The Point.” From her the wave goes about a kilometer. This is the best stretch for surfing. The last point is called “El Hombre.”

With fortunate circumstances, you can go all the way from “The Point” to the pier on one wave. It’s about 2 kilometers, which a surfer can conquer for as much as 3-5 minutes – a very long time for a surfer.

Locals say that there have been professionals who pass this way on one wave. But to completely conquer the distance of 4 km from “Malpaso” to the pier no one managed. 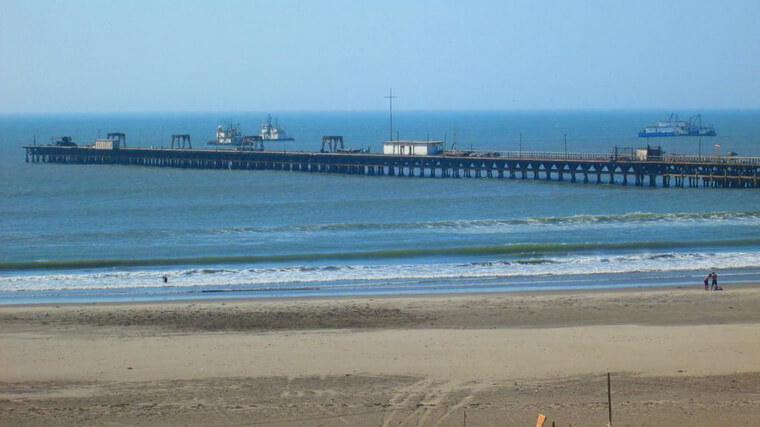 The pier is the end point of the wave ride

When is the best time to surf in Puerto Chikama

The best time to surf is Easter week and the winter months of the Southern Hemisphere. That’s when strong winds point toward the coast and create great conditions for the formation of long, periodic waves.

Surfers say that when you can’t ride one wave, you just have to wait and ride the next one, it comes almost immediately after the previous one. 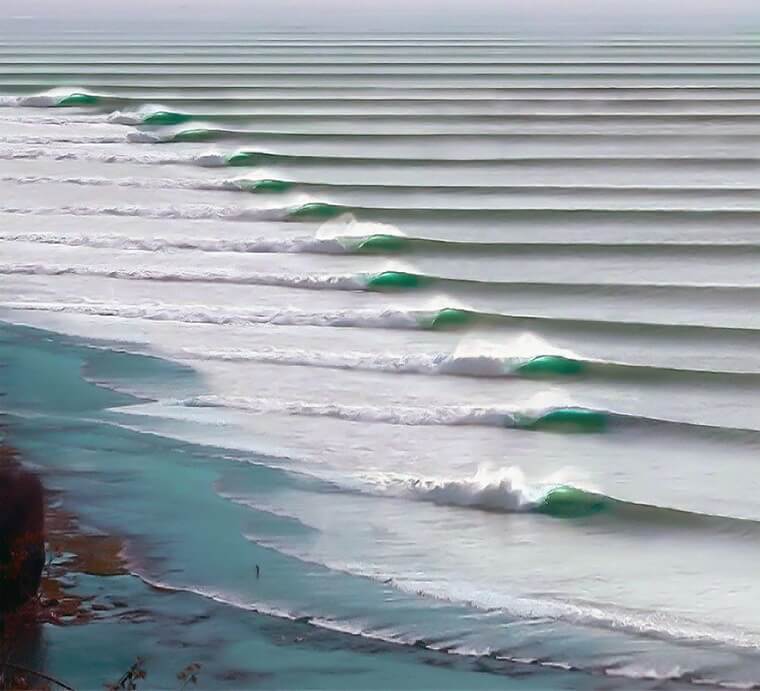 This place is not suitable for a beach vacation (the cold Peruvian current affects). If you want sand and ocean, you’d better go to Copacabana Beach in Rio de Janeiro. Puerto Chikama is mainly visited by surfers, for whom the conquest of waves is the main hobby in life.

READ
End of the World Swing - Extreme Swinging Over the Abyss

Tourists usually come here from the city of Trujillo or from the capital of the country. There is a bus service for this. Some use cabs.

You can find accommodation and small cafes in Puerto Chicama. The upscale Chicama Surf Resort is very popular. The wave in Chicama was the first wave in the world to be protected at the government level. The country’s authorities prohibit any construction within 1 km of the coast, so as not to disturb the topography and features of the coastline.

In total, across the country, the government plans to take under protection 130 sites with unusual waves. 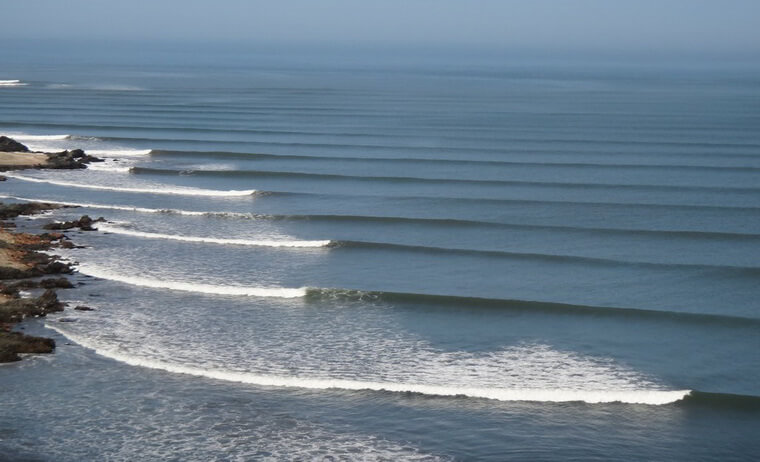 A good wetsuit with a thickness of 2-3 millimeters is an obligatory piece of clothing for you. It is worth remembering that, despite the equatorial belt, the water here is quite cool (do not forget about the cold current). The water temperature is 17 to 21 degrees. To walk on the beach, it is convenient to use special shoes.

On the way from Trujillo to Puerto Chicama, you can visit the town of Huanchaco. Here you will see perhaps the world’s oldest type of “surfing”. While fishing, local fishermen still walk on the waves in small cane boats called “Cabbalitos de Totora”.

What Chickama’s long sea waves are can be seen in this short video. Puerto Chikama Beach, located in northwestern Peru, is known for having the longest waves in the world. That’s why international surfing championships are held here. But even those who are indifferent to the conquest of the water element, this place stuns, because to see waves of such a huge length can, perhaps, only on this coast. It is incredibly beautiful! It seems as if some giant artist has painted the water look in horizontal white stripes stretching for kilometers.

READ
Santa Cruz is the most populous island in the world

Five minutes on one wave

Local surfers tell us that this beach was discovered in the 1960s by one of North America’s most famous surfers, Chuck Shipman. He saw the surprisingly long waves from the porthole when he was returning home on a plane after the World Surfing Championships in Punta Scala. He later found the area on a map and came here to discover the most perfect place to surf. The wave on the Puerto Chickama coast is striking in shape and stroke. It has a moderate speed and its crest can travel up to two kilometers or more (from the rock ledge to the pier). Local surfers say that all this distance a professional can overcome on the same long wave. And the wave itself from the side looks very impressive: it stretches along the shore, as a long, long road … This coast is considered very convenient not only for masters, but also for beginners, because if you fell on one wave, you just have to wait for the second – they usually come evenly one after another and have the same height. Waves for all tastes

The waves in Puerto Chikama can be divided into sections. The first has a length of 150 meters, the wave here rises to a height of two meters. The next waves have a maximum length of 600 meters. The next section stretches for about a kilometer, and the final group of waves (two-kilometer) is the most difficult, but the surfing on such a cascade will be the most unpredictable. The formation of unique waves in this place contributes to favorable natural conditions – the wind rose and a good angle of the rocks that frame the beach. Many surfers from beginner to advanced level come to Peruvian Beach to try to tame these unseen waves. And it is, of course, a free show for vacationers who come here just to sunbathe and enjoy the fine sand and crystal clear water.

READ
The Enchanted Well - bottom as the palm of your hand. Brazil

For five years now, Puerto Chickama Beach has been the world’s only protected surf park. Any construction work near the coast is prohibited, because it can disturb the unique topography of these places. Construction work can destroy the conditions under which the waves are formed. /Photo:masterok.livejournal.com

The best time for surfers to visit the Peruvian beach is from April to October, when it is winter here. During the cold season, the wind is stronger – it makes the waves last longer. Also, the surf is stronger in the winter.

Well, those who just want to swim and sunbathe, we recommend to come here in the summer season, because at other times, the water on this beach is very cold (for surfers it is not an obstacle, because they use protective suits).

In general, the climate here is warm (temperatures range from 15 ° C to 28 ° C), which makes this beach a paradise not only for extreme athletes, but also for vacationers. You can reach the beach with long waves by car or by bus, which runs from the town of Trujillo two and a half hours. This coastline in Peru is pretty clean, but there are some beaches on Earth that require serious cleaning. The story of a 70-year-old woman who decided to make the world a better place and cleaned 52 beaches in one year cannot leave anyone indifferent. Such people deserve respect.