Spokoynaya Bay on the map of Primorsky Krai

Spokoynoy Bay in the Sea of Japan near Nakhodka, its natural and climatic features create favorable conditions for recreation of families.

Spokoy Bay justifies its name. There is peace, no storms, high waves. Until 1972 it was called Taz-Gow.

Location and its natural and climatic features create the preconditions for a variety of recreation.

An interesting fact. “Devil’s Finger”, which has another name “Pirate’s Castle”, is a natural landmark. This is a pile of boulders, the top of which is decorated with a huge boulder hanging down. It gives the impression that the stone is about to fall. But it does not happen. There is a hypothesis that this stone composition is created by prehistoric people, that is megalithic.

The bay is a recreation center with the same name, a tent camp, and Aquamax diving club.

Where is the bay

The waters of the Sea of Japan formed a picturesque bay near the village of Vrangel in Primorsky Krai. “Quiet” is located at a distance of:

How to get to the bay

Tourists can take an intercity bus №506 to Nakhodka or №536 to the village of Wrangel from Vladivostok.

From the bus or train station you can get to the base. There is a minibus with 8 seats. The ticket price is 500 rubles. Children under 7 years old enjoy free transportation.

If you want to travel by car, go from Nakhodka to the Wrangel settlement and then to the Pervostroiteley settlement. Then you will need to take a country road all the way to the bay. You will need to follow the roadside signs.

Important. The unpaved road through the pass in rainy weather is an obstacle for cars. It is better to travel by off-road vehicles.

The Spokoynaya Bay has preserved its natural purity thanks to two circumstances:

Distance from the sea is 50 meters. The coast is covered with white fine sand. The beach is clean. On the land side of the bay is surrounded by mountains, covered with shrubs, grass and protect from the wind.

The western and eastern shores are rocky, there are many small bays. The western part is crossed by a stream with clear natural water. The northern shore is low.

Summer in the bay begins in July and is characterized by a large amount of precipitation. The autumn climate is the most attractive for vacationers: warm, sunny, almost no precipitation.

The most suitable months for recreation are August – September.

Prices for accommodation in Tranquil Bay

The territory of the resort is divided into two parts: the beach part and the forest part.

Costs for meals are not included in the total price.

For leisure and entertainment are available:

READ
The Valley of Geysers in Kamchatka, description and photo

Believe me, your humble servant in his past profession has visited all continents except Antarctica, and he has something to compare it with. The richness of flora and fauna of Primorye is incomparable, and the relief with unique mountain systems is a paradise for lovers of outdoor activities, or just lazybones like me)).

The main natural attraction of the bay is a cluster of rock outcrops called “Devil’s Finger” or “Pirate’s Castle. You can see it well in the photo. 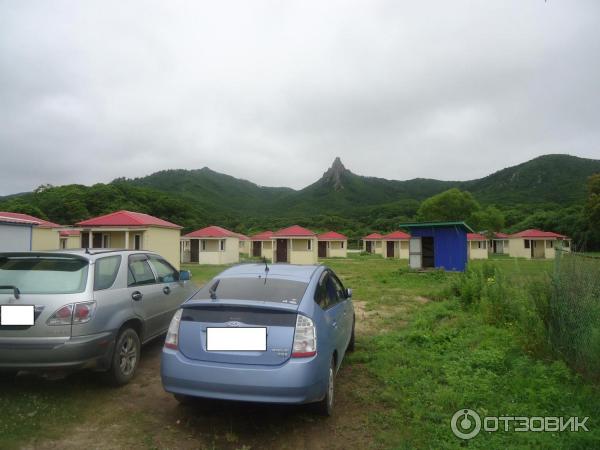 Spokoynaya Bay is located on the coast of the Sea of Japan, 30 km from Nakhodka. To get there you must go through Wrangel and turn to the village of “Pervostroiteley”. Then all the way through the village go out on a terrible) dirt track and just a few miles straight until you see the sign – the bay “Spokojnaya”.

Now pay attention, to visit the bay requires only four-wheel drive transport, the bay is a high mountain ridge and it’s easy to enter, but to go up the hill at a steep angle is very simple, but if suddenly the rain is a total cramp. So only 4WD and do not listen to anyone!

The photo above shows that we stayed at the tourist base, its name is the same as the bay), but it is absolutely unremarkable, so I recommend going with a tent. The place for a tent camp is, it will be on the order of cheaper and more interesting and even quieter if you with children. As on the resort disco flourishes) and drunken holidaymakers inspired by alcohol order irritate))).

In most Internet sources write that the bay is warm water – nonsense, “Quiet” is one of the cleanest and coldest bays of Primorye, keep this in mind, the sand on the beach belenyki, just a fairy tale.

Well, we are going to the castle of pirates). 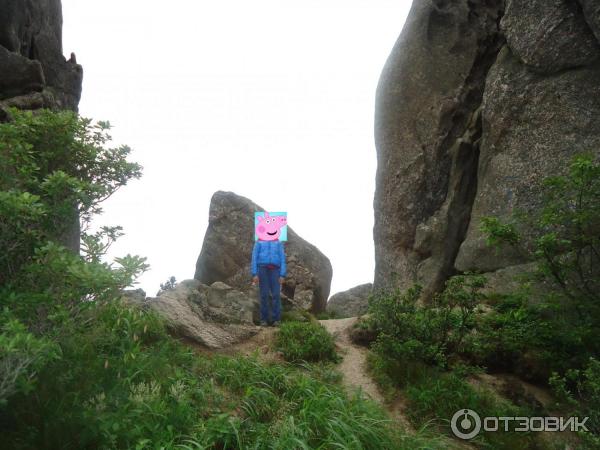 To climb do not need to be an athlete, but also be fat-bars do not need to be, I say so nine-year son with a rise cope, but he was heavy, tired strongly. No equipment is required, except, preferably, waterproof clothes and good shoes. 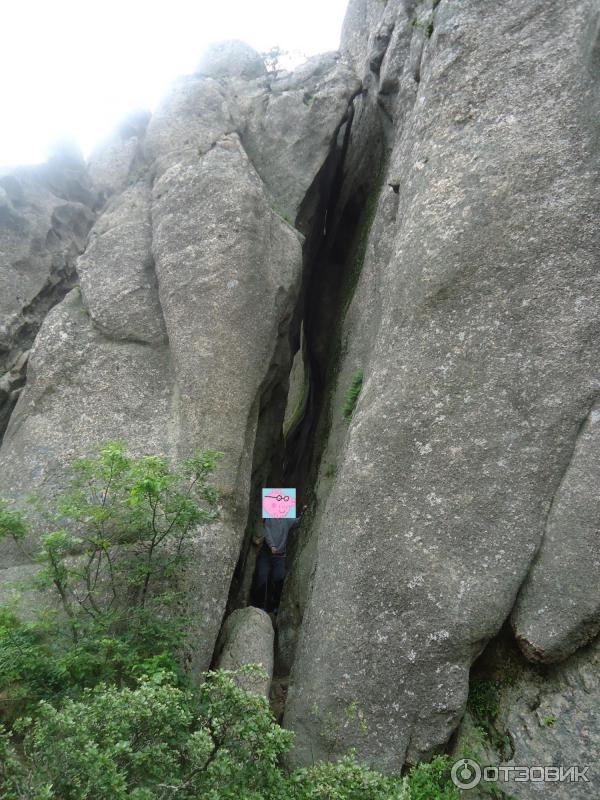 Until recently, the Spokojnaya was the location of a frontier outpost and therefore the bay was closed to the public. This allowed it to preserve its pristine appearance and not to be polluted by homo sapiens. Now, on the site of the outpost recreation center. 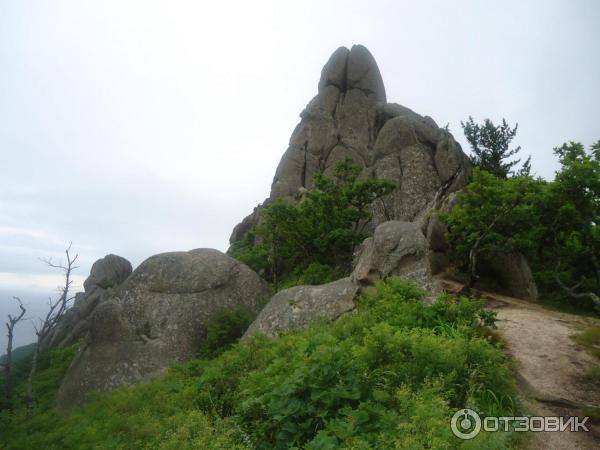 My son tired). The whole way up the mountain will take about an hour, the climbs are steep, in a state of doping climb extremely do not recommend. 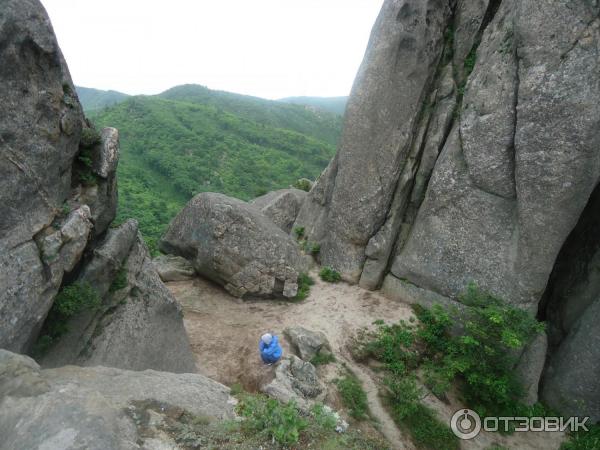 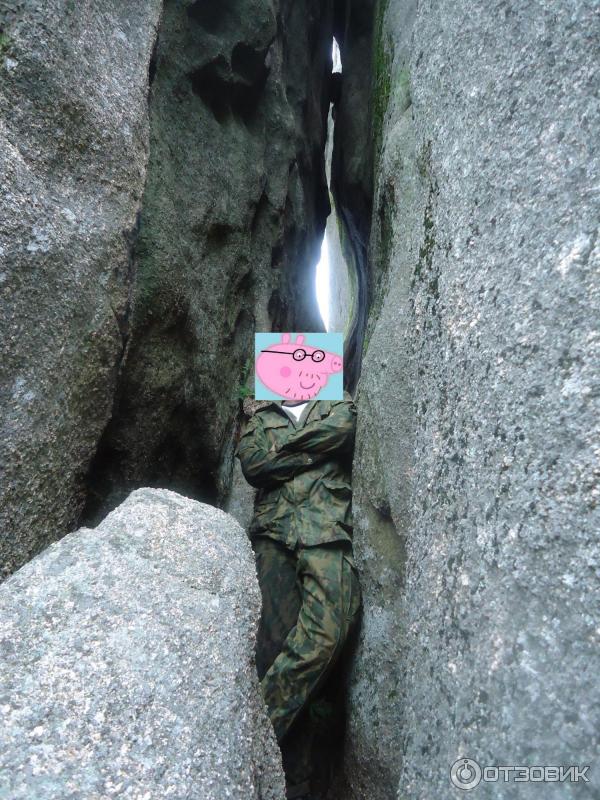 But after ascending you will see such a view! In my opinion – Wow! A light haze of mist, fresh sea breeze, stunning vegetation, mountains, sea – it’s a fairy tale!))) 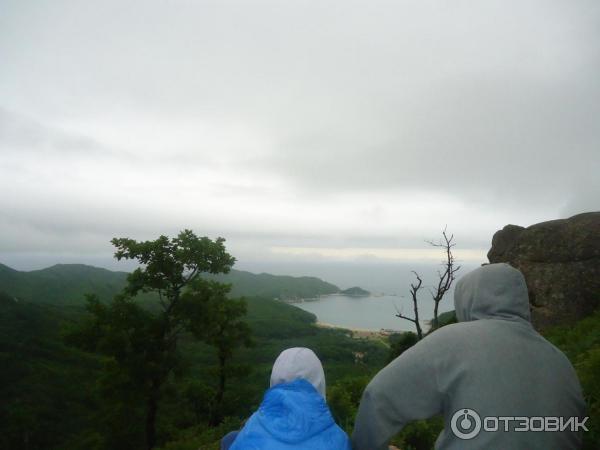 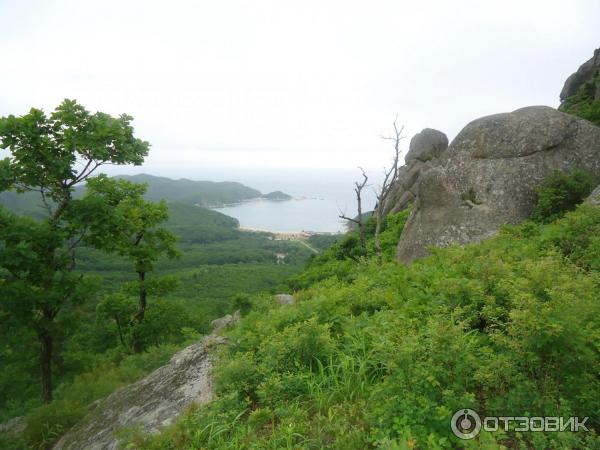 This boulder at the very top of the “Pirate’s Castle” is the subject of debate in academia. Some luminaries argue that it is a megalithic structure, that is, created by man, while others are against this theory. But I do not care, because just beautiful!) Many have tried to bring the boulder down, but no one could, including me, no matter how hard I tried. Although on closer inspection just can not believe why the stone does not fall, standing at a negative angle, the area of contact with the rock miserable, must fall – but no)). I am glad that there are no curse words on it apart from one “Natasha”). 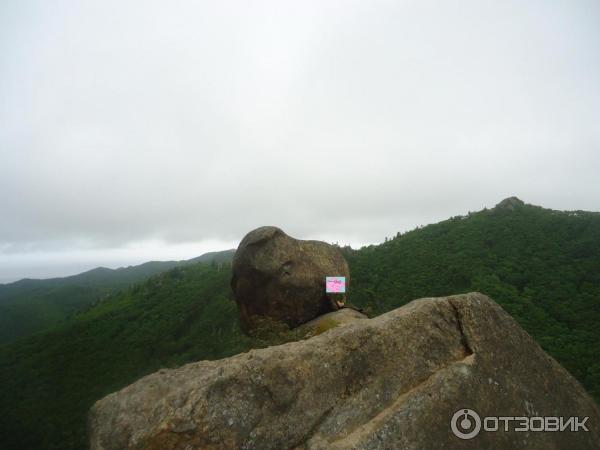 In general, friends, I say so, enough to go to the Crimea, Turkey, etc., etc. Come to the Primorsky region, here you will find everything and even more, except perhaps the system “all inclusive”))).

As for the bay “Spokoynaya”, and it is also called “Tazgow”, it is the perfect place to rest.

Cons: – Cold water. – Need to have a four-wheel drive vehicle.

READ
The Garden of Gethsemane in Jerusalem, photo and description

-Pureest beach. -Pristine water. -Chic fishing, with a boat in general. -Great diving, rent available, the sea is very rich in all sorts of wildlife. -The absence of wind in the bay, the water is always quiet, hence the name. – Devil’s Finger.