When you hit a rock, you usually expect to hear a thud, at most a click, but not a ringing sound. But tinkling rocks do exist in nature; at Jingle Rocks State Park in Pennsylvania’s Bucks County, there are 128 acres of huge boulders, a unique natural phenomenon. If you hit any rock with a hammer, it jingles.

American settlers learned about the rocks from Native Americans in the 1700s. This ringing is a sound so unexpected that it seems as if the stones are metallic and hollow. For years, the strange phenomenon has puzzled scientists and geologists. Several experiments have been done on the rocks, but the nature of the phenomenon remains unclear.

The ringing rocks in Bucks County have different shapes and sizes: from those that look like a clenched fist to huge jagged blocks weighing several tons. They have a very unusual color, different from other rocks, which are composed of the same lithological material but are silent.

Overall, only about thirty percent of the rocks are ringing, but they are interspersed with non-ringing rocks. Those that do ring, however, have an unusual reddish color on top and on their sides; sometimes the same hue is found in their underside as well.

Another peculiarity of these rocks is that they do not show the sharply pronounced angularity characteristic of splintery rocks. But they are neither round, nor oval, as is the case with water-rocked boulders. All of them, as geologists say, are subangular, i.e. with many chaotically arranged faces, but without any sharp edges.

But the most mysterious thing about these rocks is small depressions in the form of saucers, or strange uneven channels, the entry holes of which are located on the sides and bottom surfaces.

It should be noted that not only the rocks themselves, but also their fragments ring; moreover, in combinations with other solid rocks. Thus, the pieces of ringing rocks were embedded into concrete walls, but they kept ringing. Moreover, suspended from a wire rope, mounted on a concrete pedestal, clamped in a giant lathe chuck, they continued to play their mysterious melody. But the “silent” samples made of the same rocks could not be made to ring under any circumstances.

It is interesting to note in this connection that in 1890 a certain inventive musician J. J. Ott gave a concert in the American state of Pennsylvania. According to one listener, the “pure, bell-like sound” of Ott’s instrument surpassed that of the accompanying brass band. There didn’t seem to be anything special about it except for one thing: Ott was playing on. rocks collected in the ringing rocks.

All these musical properties of ringing stones, at first glance, come into apparent contradiction with the physical schools of thought that determine the resonance characteristics of the musical instruments we are familiar with. For example, the same bell.

The size and shape of these stones seem to have little effect on their sound: the fragments of a block sound exactly the same as the original stone, while the sound of individual stones may vary in a certain range of frequencies depending on the place where they are struck. But what is more puzzling is that often one stone is capable of tinkling, while another, lying down and not outwardly distinguishable from the first, is not.

In 1965, scientists decided to solve these mysteries by using boulders from the same field as Ott. Crushing the rocks into small pieces, the scientists then studied them under a microscope. After their study, they concluded that the tinkling stones acquired their properties due to internal stresses that resulted from their periodic exposure to wet and dry conditions.

The same stones that were lying nearby in the shade, on the edge of a field or in the surrounding woods, retained more moisture, were less exposed to weathering and could not jingle.

Other scholars, however, did not agree with these conclusions. They claimed that some stones continued to ring even after being submerged in a pond or after a long stay in a damp cellar. Moreover, of the boulders that were exposed to the sun, only a third of them rang.

And yet, in spite of the research, the mystery of the ringing stones has not been completely solved.

It should be kept in mind that the sounding stones are spread all over the world. The so-called stone gongs are found in temples and houses in Kufou (Northeast China). Stone slabs found in England, Nigeria, and East Africa have also produced bell sounds.

Some stalactites and stalagmites in Spanish and French caves also sound like bells when struck. In addition, they are painted with animal figures and geometric patterns, and you can see the impact marks on them. Similar stalactites have also been found in the caves of Central America, where they were used by the Mayan priests.

The Ringing Rocks of the Bells in the Mountains

An amazing natural phenomenon in the Delaware River Valley in the American state of Pennsylvania you can not only see but also hear. The behavior of unusual rocks, which locals call the Garden of Stones, and those inclined to mysticism called the Ring of the Devil, can really puzzle even the experienced traveler. The fact is that the Ringing Rocks are capable of emitting sounds, and in a fairly wide range. Another striking fact is that the sound of jingling can be both huge boulders and very small stones the size of only a man’s fist! 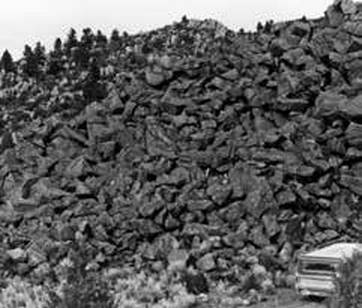 The songs of the Ringing Rocks are not just sounds of wind in the cracks, but loud and sharp sounds that resemble more than anything else… bells ringing! In this desolate place there is no place for church bells to ring, and should we be surprised that scientists have not yet figured out where these strange sounds come from? The more so because very similar cliffs stand silent, as stones should, and the Ringing Rocks sing their song over and over again – and, it seems, for more than one hundred years!

– Next to the Ringing Rocks is a strange plateau, also almost devoid of life – not even lichens, which grow readily on the rocks, can be found here. This lack of life is striking against the background of the forest that surrounds the plateau and the Ringing Rocks, where life is bubbling. Researchers who have been to these places many times also say that when they were near the Ringing Rocks, they felt an unconscious feeling of terror, whether or not the cliffs made a sound.

The Ringing Rocks, like the neighboring rock formations, are composed of the same rocks: quartzite, basalt, and rhyolite. The only difference between the Ringing Rocks are the brown rock tops decorated with reddish lichens, which for some reason prefer to settle here. However, apart from the primitive plant forms, the unconventional rocks do not attract anyone else. It is surprisingly deserted near the Ringing Rocks: animals, birds, and even insects prefer to avoid these places.

This text is an introductory fragment.

UP THERE, HIGH IN THE MOUNTAINS

THERE, HIGH IN THE MOUNTAINS If your enemy is hungry, feed him with bread; if he is thirsty, give him water to drink; for if you do this, you are gathering burning coals on his head. The book of Solomon’s Proverbs, 25-211Everything, everything was good, beautiful, even splendid-and the mountains in the melted snow of summer

BELLS LYOUTH – The gossips have gone up and down the town, one more unbelievable and evil, – What does it mean? – A bell is ringing somewhere – In the villages the news wanders and tempts the people to believe in them. Others grip it over the edge, and want to believe it: it’s cleverly invented.-Don’t believe it, don’t succumb to it:

A park in the mountains

Park in the mountains “To the brave we sing a song. ” M. Gorky About the hero of this story I heard for the first time on New Year’s Eve – in the circle of writers were doctors, pilots, sappers. Vyacheslav Ivanovich, a young talented surgeon, a thirty-five-year-old doctor of medical sciences.

In the Mountains of West Virginia

In the mountains of West Virginia, Cincinnati was the last great city on the route of our return to Washington. Farther along, Chillicothe, Athens and Marietta in Ohio, Parkersburg and Clarksburg in West Virginia were small provincial

The silver resident of the air bell

Silver Air Bell Dweller The water spider (Argyroneta aquatica) of the family Agelenidae is unique in that it builds trapping nets, hunts, feeds, winters, and breeds underwater. It is widespread in standing and slow-flowing reservoirs rich in water.

And in the mountains the war was rumbling

And war was rumbling in the mountains. Heavy fighting continued in Afghanistan. The country was gripped by a civil war. The troops of the Soviet 40th Army carried a heavy burden on their shoulders. Our leadership grew increasingly concerned that the situation was a deadlock, that the Russians could not solve

THE BELLS OF THE LOUD BATTLE

Bells Are Ringing on the Dollar The empire dominated the world more through economics and lies than force. At the end of World War II, it had the privilege of printing convertible currency, it monopolized nuclear weapons, it had almost all the gold

CHAPTER III LAKES IN THE MOUNTAINS

CHAPTER III LAKES IN THE MOUNTAINS 1. Lake Radok. 2. Forms of cellular weathering in the oasis

Alexei Kasminin BELLS The boards are the first thing that catches your eye. The boards are stacked at the entrance to the bell tower of St. Bogolyubsky Monastery. Work is still going on inside: after all, to restore, slowly return the form, saturation and essence of the once lost, altered structures

Squeeze water out of the rock

“In the mountains great and high”

Alexander Astafyev AS A CROWN BELL

Alexander Astafyev TO CROSS THE CROSS The ringers of the Church of Christ the Saviour made a point of ringing the bells – and every now and then a ray of sunlight breaks through the whitish pallor of the overcast Moscow sky. Well, the day when I met with the chief bell ringer of the Moscow

CRASH IN THE MOUNTAINS

A Crash in the Mountains Something happened in Chechnya that should have happened inevitably. The Maskhadov government practically ceased to exist. Almost all the former “kadyrovtsy” united against him, demanding his resignation – from Basayev and Yandarbiyev to Raduyev and