If you travel through the famous Loire Valley in France, it is impossible not to notice the abundance of dwellings carved into the mountainsides and rocks of the local landscape. They are called troglodyte dwellings.

In fact, they are the result of the locals’ desire to make full use of their surroundings. The houses are carved out of soft and pliable tufa.

The advantage of troglodyte caves is that they maintain a constant temperature of 12 degrees Celsius. This makes them a good year-round habitat, providing warmth in winter and coolness in summer. In addition, it guarantees good protection against bad weather. 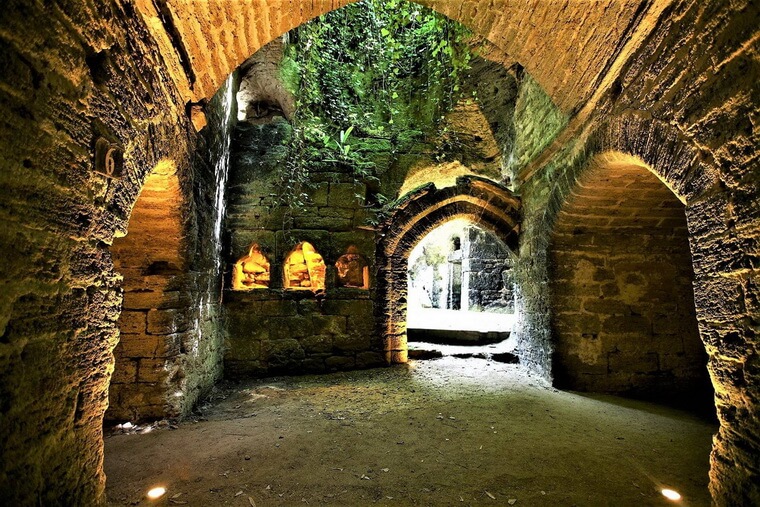 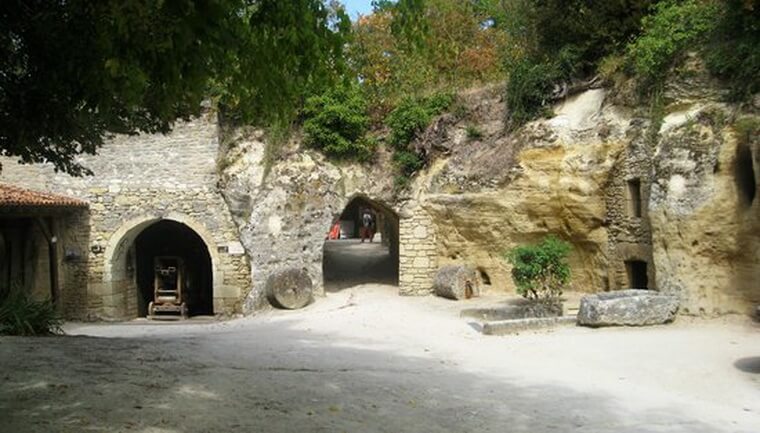 Who are the troglodytes?

From the Latin Troglodytae, cave dwellers.

Technically, any cave-dweller is called a troglodyte. Beginning from Neanderthals (for example, the inhabitants of Lascaux Cave) and ending practically with our contemporaries. Consider the underground city of Coober Pedy in Australia. Its few inhabitants can also be called troglodytes.

For the sake of justice, let’s say that usually troglodytes are called the ancient inhabitants of our planet. Those who hunted mammoths and saber-toothed tigers.

In France you will find many fine examples of troglodyte houses in towns and villages of the region, such as Saumur and Douai-les-Fontaines. 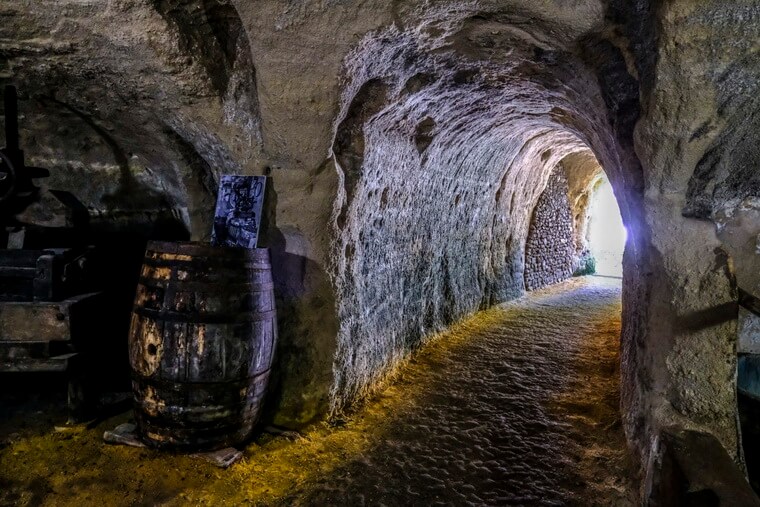 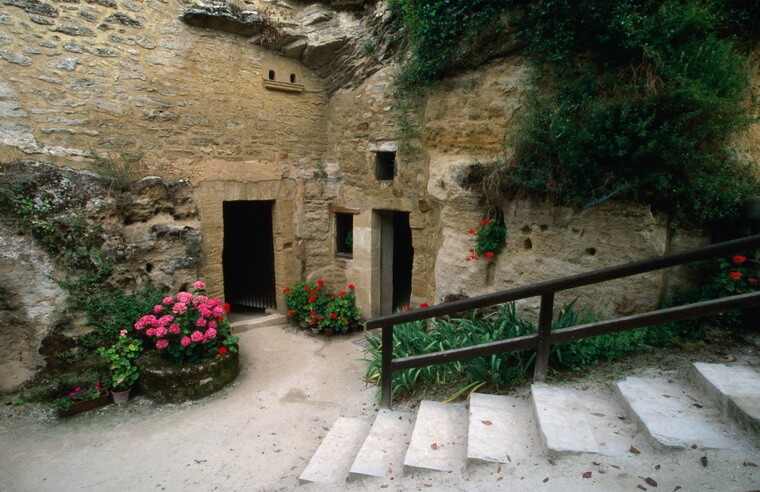 One of the best-preserved examples of underground, or should I say cave life, is the Troglodyte village of Rocheminier.

It is in the municipality of Loures-Rauchmainier, 6 km northwest of Douai-la-Fontaine, next to the D761 in the Loire Valley. 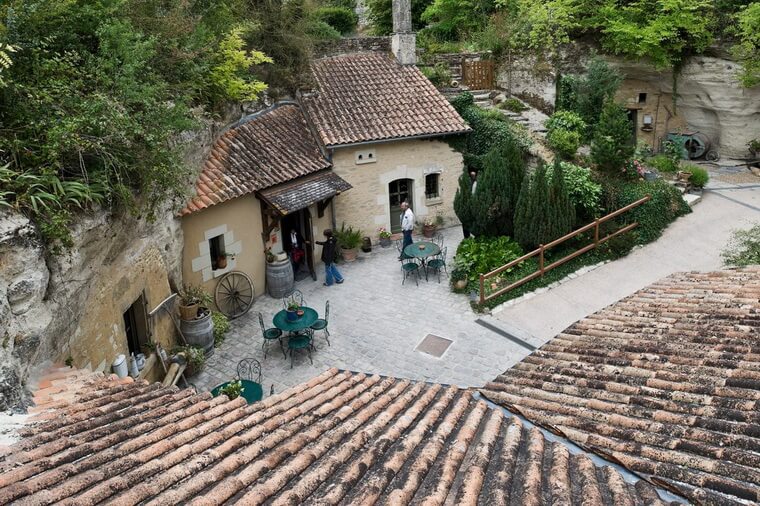 Part of the troglodyte village has been preserved as a museum. It is called the Troglodyte Museum. Here you will see a way of life that existed until the 1930s. 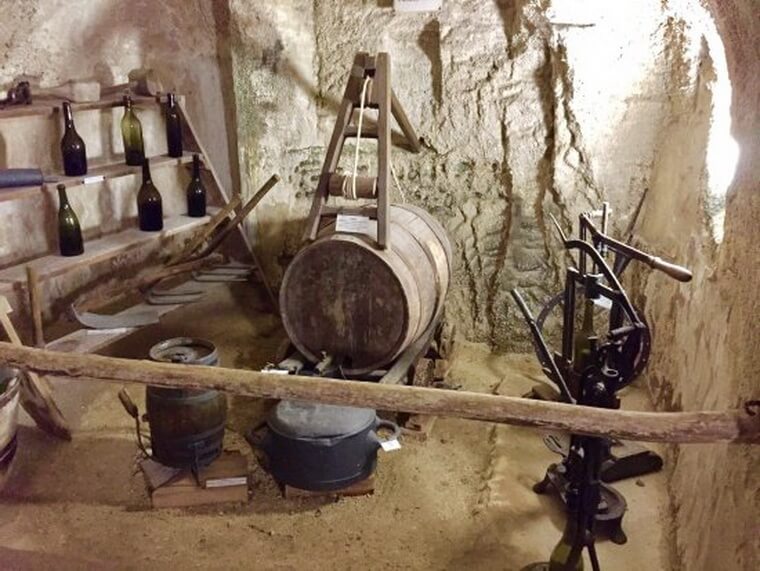 Interesting fact – There is information that the last real inhabitants of the underground houses left them only in 1984.

Tour guides will offer a route that will take you through twenty rooms of the village, consisting of two old farmhouses with outbuildings and houses, as well as an impressive underground chapel carved into the rock.

When you wonder how it is possible to live in these small quarters, you will be shown a restored room in which you could survive quite comfortably even today. 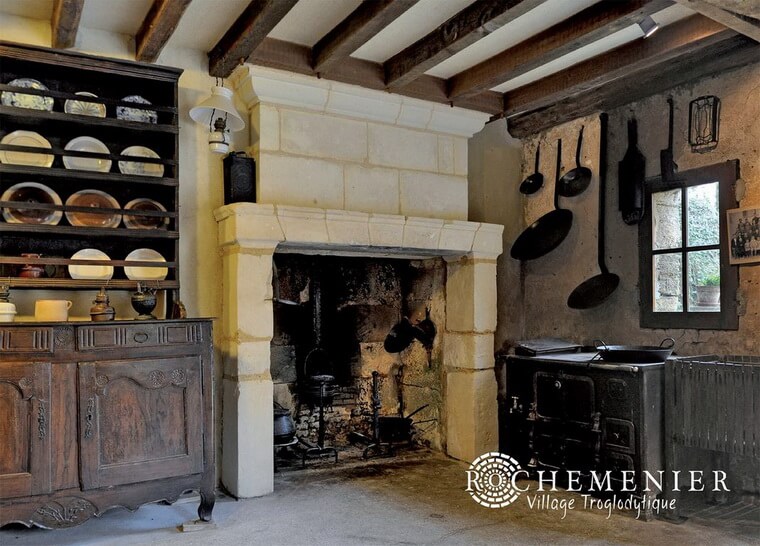 All in all, you will see two old lowland troglodyte farms with their living quarters and outbuildings in an area of one hectare. Feel the unique underground way of life in the Loire Valley.

Note the antique furniture, tools and old photographs. Don’t forget to visit the underground chapel. It was dug as early as the 13th century. 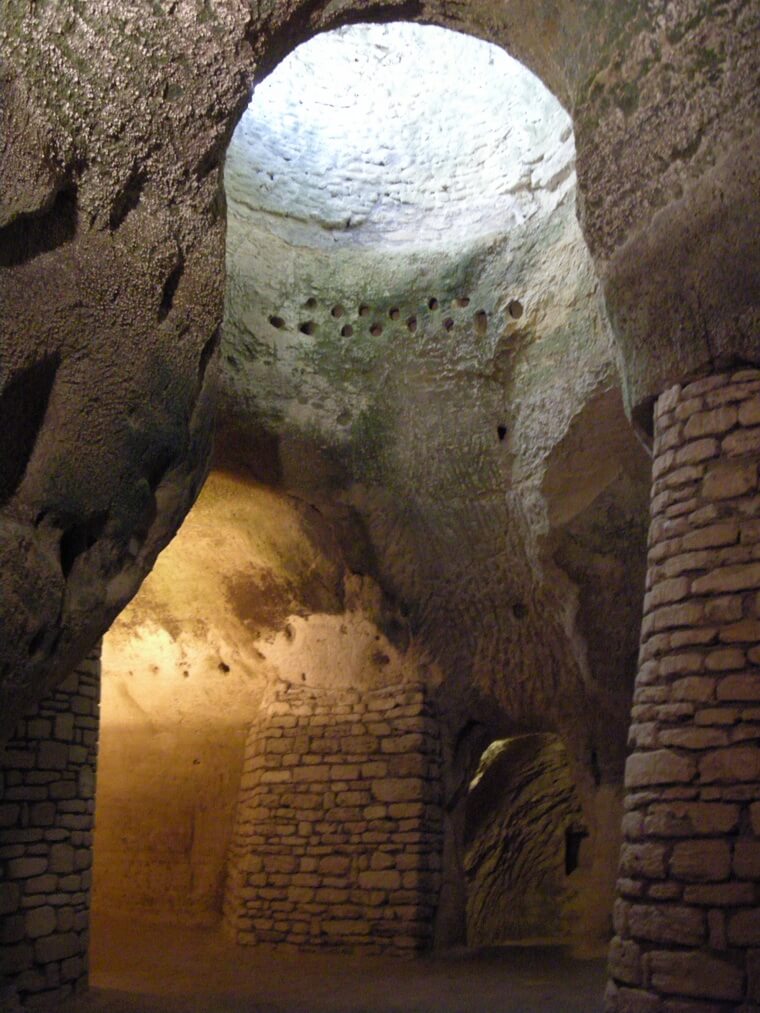 Note – the museum is closed during the pandemic. Tentative opening is February 2021.

For more information about opening hours and costs of admission you can visit the official website of the village of Roszmier.

Cave Dwellings of the Loire Valley 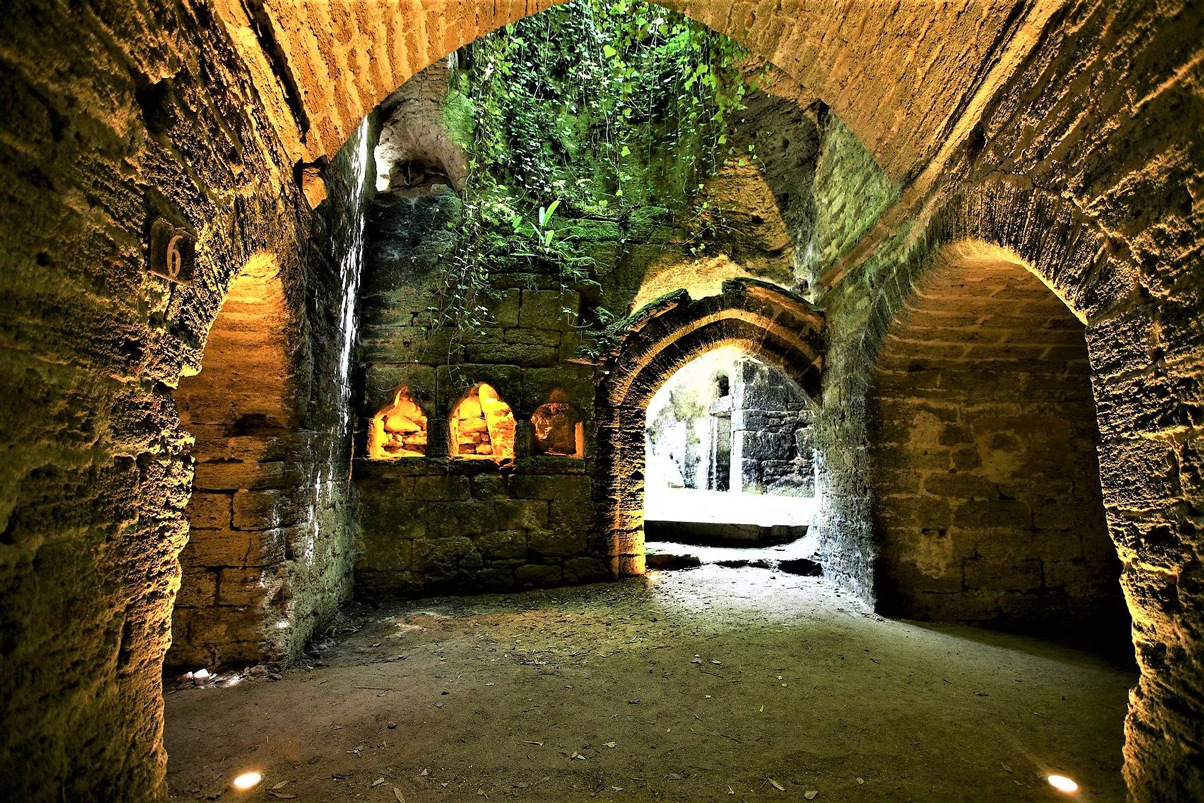 The Loire Valley Center is located in the northern center of France. The region is home to numerous castles and vineyards. In addition to these, there is a concentration of caves that were used as dwellings. They were formed during the extraction of tufa, a porous rock that was the main material for buildings for several centuries. Such dwellings were made comfortable to live in: they were enlarged and reinforced. Stable weather conditions helped to keep the caves intact.

Subterranean cavities were home to half of the inhabitants of Somur at the end of the 19th century. These “cave houses” varied in format from small dwellings in which farmers lived with their livestock to elegant manor houses perched on beautiful cliffs. The Association of French Underground Property has discovered 45,000 such structures in the Loire region. Some of these have survived to the level of ruins; others are chapels, museum complexes, living quarters, hotels and clubs. Let’s take a look at the most famous of them.

The cave is located in the commune of Douai-en-Anjou in the department of Maine and the Loire. In the 6th century, stone sarcophagi and traditional coffins were made at this site for foreign customers, including England. Historic sites remain in the cave: a temple, local dwellings, a wine cellar and a farm.

The Troglodytes et sarcophages is now the most complete underground structure of the Middle Ages and a historic monument of the country.

The church is located in the commune of Aubeterre-sur-Dronne in the district of Angoulême. It was erected in the eighth century, and the Benedictines reconstructed it in the twelfth century. The idea of its construction is related to religious motives – its outlines are similar to the remains of the settlements of the Middle East. The church housed religious relics. The place of their storage is the reliquary, which is similar to the Temple of the Holy Sepulchre in Jerusalem.

The cave is located in the department of Maine-et-Loire. Near the former quarry, the remains of a stable with attached rings for the horses are preserved.

Since the beginning of the last century in the galleries of this cave are engaged in the cultivation of mushrooms. There is a restaurant where you can eat shiitake, mushrooms, oyster mushrooms produced locally. For nature lovers, there are excursions to the snail farm, where they talk about the peculiarities of the shellfish habitat.

On Saturday, you can attend a night party, which takes place in an underground club.

This cave is located in the municipality of Denès-sous-Douet. The site is unique in its decoration: the walls are framed by several hundred human figures with expressions of intense suffering. The period of their creation dates back to the XVI-XVII centuries. La Cave aux Sculptures is a historical enigma and an example of folk art.

The village is located in the commune of Loures-Rochemenier. It is the largest cave complex in the region. The local government bought up part of the area where peasants worked in the Middle Ages. They founded a 2 hectare museum complex on this site and opened 20 branches in it. The village includes 2 medieval farms with a residential area and adjoining buildings, a chapel and farmland. They retain furniture and traditional household items of the time.

5 subterranean apartments of the Loire Valley

Staying in such a house means experiencing the unique atmosphere of cave dwellings. Let’s take a look at a few of them.

This is a private room that is located in the small commune of Nazelle Negrón. The cost of the stay is 64 € per night. Nazelle-Negron is located near Amboise, which can be a starting point for a trip along the Loire.

Cottage in the cliff.

The house is located in Contignac. The cost of the stay is 100 € per night. In the morning you can walk through the narrow stone streets under the sunlight and birdsong. From the windows of the cave there is a picturesque panorama, and the cozy atmosphere of the house is complemented by antique objects.

The house is located in the commune of Lussault-sur-Loire in the center of France. The cost is 64 € per night.

The owners have turned the cave into a cozy guest house. Nearby attractions and wineries, and the nearby gardens are the perfect place for a summer picnic.

This is a hotel with a swimming pool, which is located in the commune of Turcan. The cost is from 100 € per night. A unique place to swim in the cave.

Cabin in a cave

The house is located in the commune of Noise in central France. The cost – 72 € per one night. A stylish place with aristocratic chic.

READ
Skaftafetl is an ice cave in Iceland. Description, photos

The institution refers to the first restaurants of the underground type. Here you can taste the local “fouet” scones.

The commune of Les Esies de Taillac-Siruy is a popular French cave village where lodging is almost always booked.

You can enjoy the cuisine and the pleasant atmosphere in a local restaurant.