On the same bank of the Tiber River in Rome as the Vatican City is located one of the creepiest museums in Italy: the Museum of the Dead Souls in Purgatorio/Museo delle Anime del Purgatorio. According to experts, this museum of the dead testifies to the presence of people in Purgatory, the place where souls pay for their sins before going to heaven. And this is no joke, the museum is full of evidence that the souls of the dead who found no rest in heaven still roam among us, instilling fear and terror in living people.

This museum is one of the ten strangest museums in the world. It is very famous and visited by tourists from Europe and Asia, but our tourists know almost nothing about this unique museum and somehow avoid it. And very wrong, the museum of the soul in Purgatory is really something to look at. And the museum is unique because nowhere else in the world you can’t find anything like that, it’s the only place on earth that can prove the existence of the undead souls and Purgatory.

Besides, another peculiarity of the museum is that it is not somewhere out there, but right in the church. In general, a lot of museums and exhibits in Rome are in churches, yet Catholicism is a softer, more tolerant and progressive faith than Orthodoxy. But, nevertheless, we are all Christians and we all share the same faith in the same God.

We’ve gotten off-topic. So, the Museum of Souls in Purgatory is in a church, the parish of the Sacro Cuore di Gesu’ in Prati. The church is very unusual in appearance, in a neo-Gothic style. 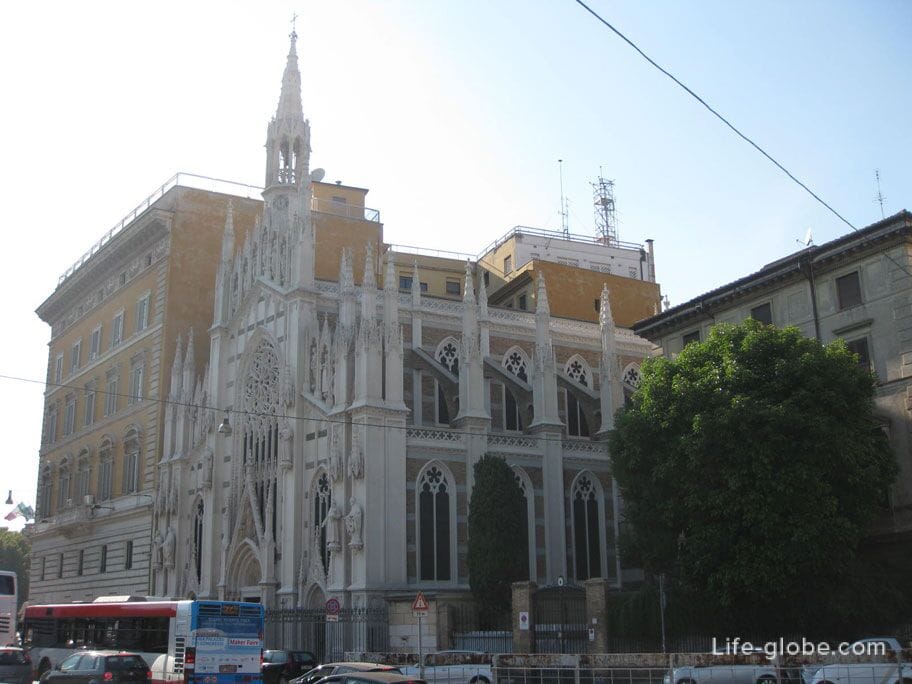 As you can see not only the museum but also the church is very unusual. There are not even enough words to describe how unusual and intriguing is the architecture of the church. You can see it with the naked eye, even on the photo, and when you stand near it, it takes your breath away and everything shrinks inside. In our opinion, it is the most extraordinary and fascinating building in all of Rome. We stood and looked at it for about ten minutes, just stood and looked, and it was impossible to take your eyes away.

Looking at this church, I felt, not understood, but felt in my gut how colossal, majestic and indescribably beautiful Rome is. You are like an empty vessel, filling up as you are in Rome. Only in Rome, after seeing such unusual sights, we realized, travel a lot, very often and as much as possible, without sparing money and time. 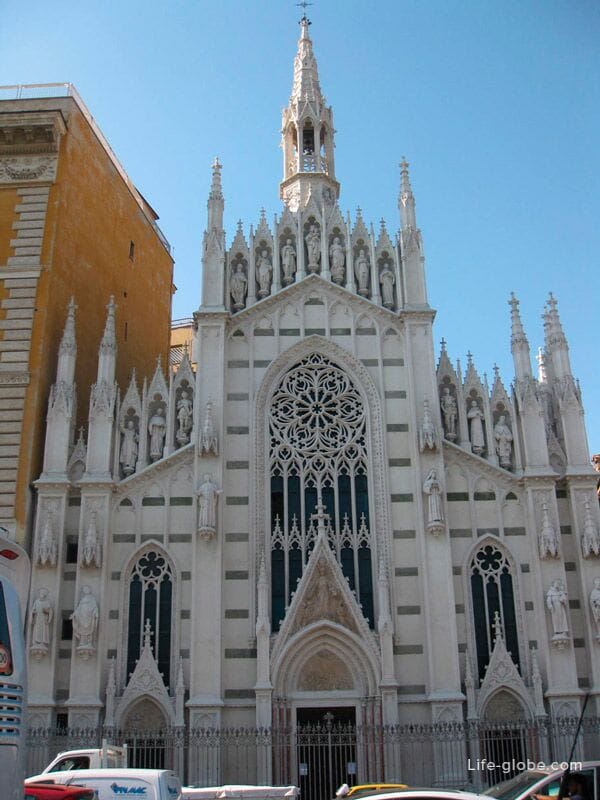 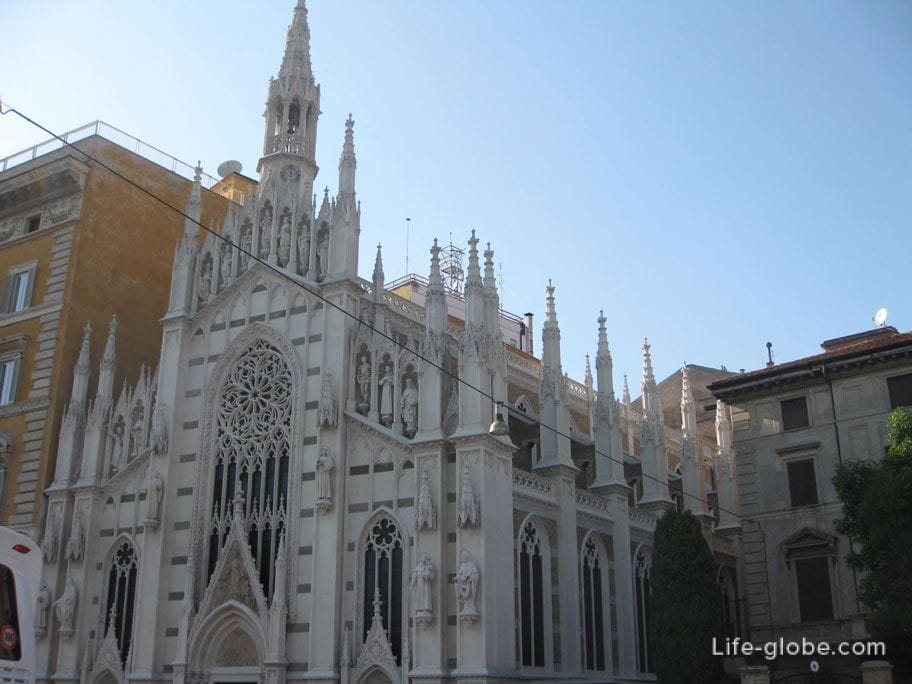 The Church of the Sacred Heart of Christ was built in 1894-1917 by Giuseppe Gualandi. Due to its rich neo-Gothic architecture, the church is also called the little Milan Cathedral.

This museum building is a must-see, it is an attraction in itself, not to mention the museum’s exhibits.

Compared to other famous museums, this museum is quite small, but not by its uniqueness, only by its size. In a small room there are numerous otherworldly artifacts. Various surfaces on which the souls of the dead have left their imprints are on display here. For example, the prints of burnt hands can be seen on wooden and paper canvases, as well as bed linen and clothes, or here are more, the outlines of burning flames on the pages of sacred books. 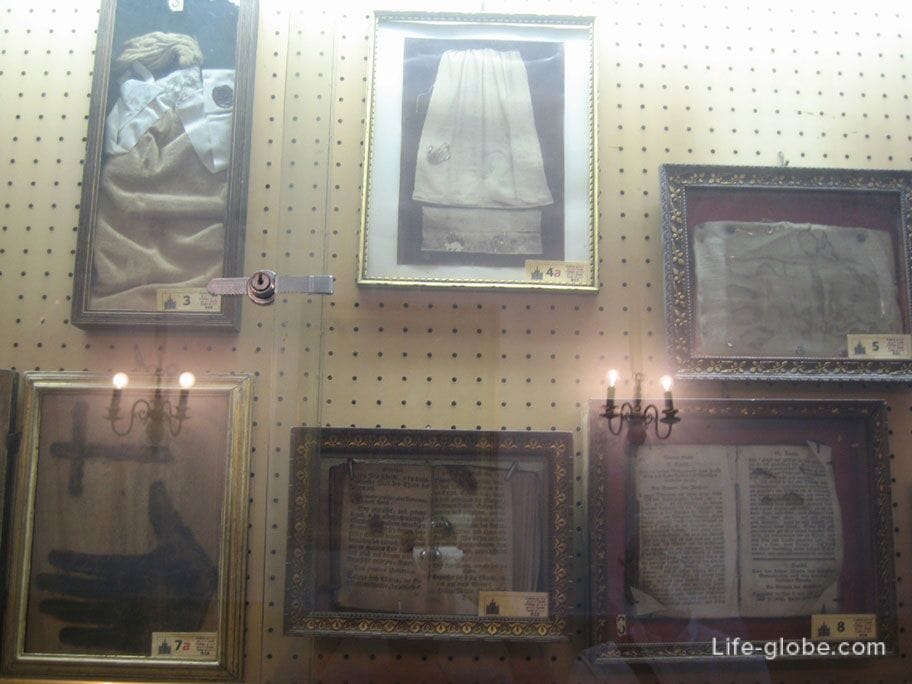 Some of the fingerprints or flames are shapeless patches on cloth or wood, where anyone can see any shape with their imagination. Others, however, clearly represent definite hand or cross shapes. 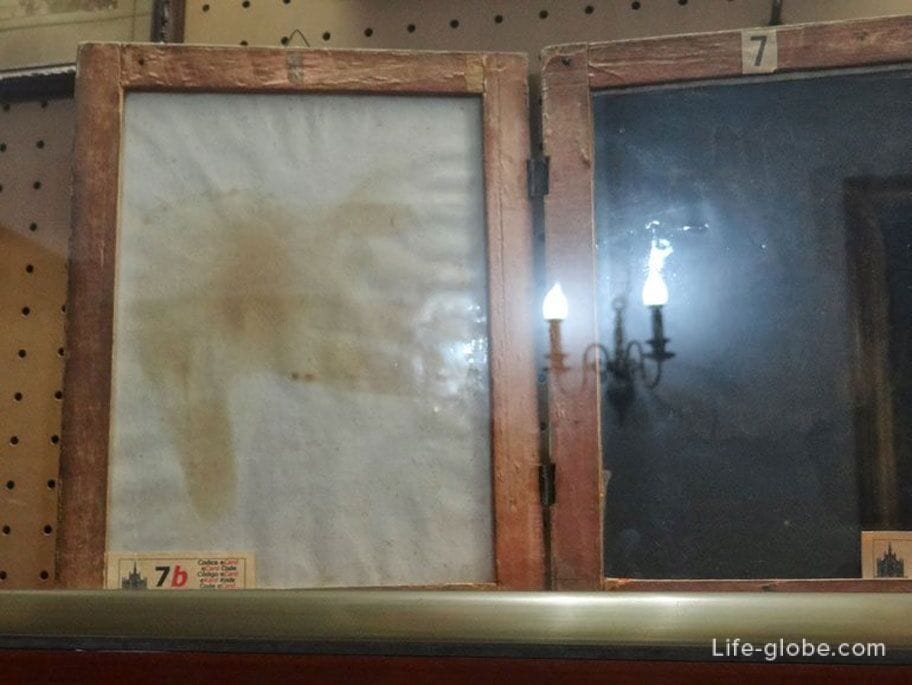 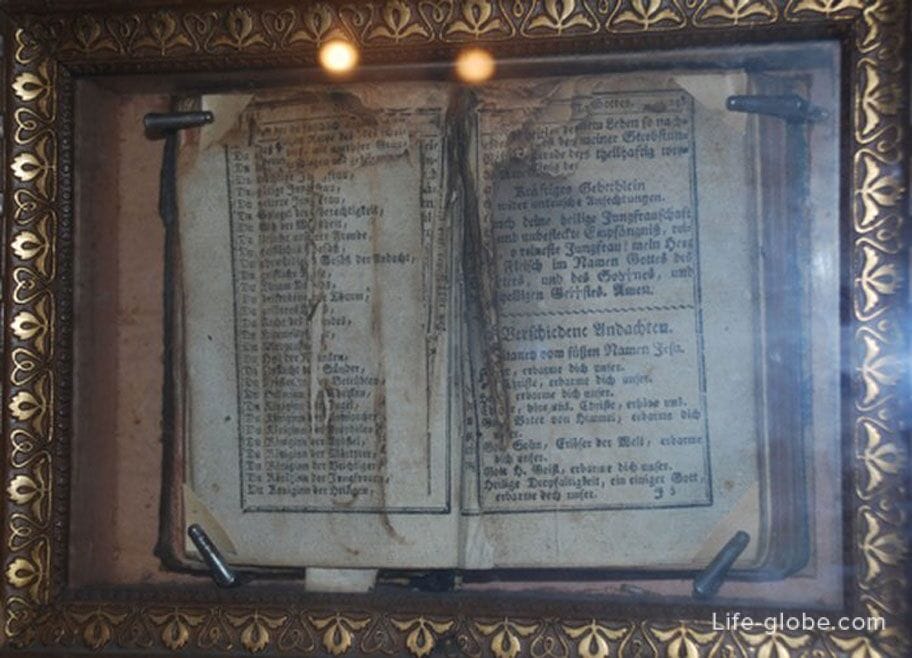 All of the museum’s exhibits are very valuable artifacts, so they are displayed under glass and are reverently guarded by church officials.

The origin of all these curiosities has a very interesting story. :

In 1897, a fire broke out in the chapel of the church. The priest Victor, after putting out the fire, saw on the wall behind the altar an image of a human face, a kind of sad face clearly painted in fire. The priest interpreted this symbol as follows: the soul of a dead person, condemned to Purgatory, had tried to make contact with the living and ask for help.

The priest then tried to find other people who had a similar experience of encountering the supernatural and perhaps find more real exhibits proving the spirit’s movement between heaven and earth.

The search was very difficult, he searched all over the world and for quite a long time, but nevertheless he still found evidence that clearly demonstrates that the dead, forced to go through a period in the afterlife of purgatory to purge themselves of their sins, tried in every way to attract the attention of living people. The fact is that Catholics believe that the souls of all sinners do not go to heaven, but to Purgatory and stay there until they have paid for their sins. However, a sinner’s time in Purgatory can be shortened if the living pray for him, thereby helping him to be purified.

So Victor assembled a certain collection of evidence of the presence of ghosts in our world, after which this museum was opened in the church.

Entrance to the Soul Museum in Purgatory:

Admission to the church and museum is free. You can’t just get into the Soul Museum from Purgatory, you have to ask the priest for it, but it’s a simple formality, you will never be refused, they will always open the doors and show you the museum. Although admission is free, it is still advisable to leave a small amount in a donation to the church.

It is not forbidden to take pictures in the museum, it is also free.

Information about the exhibits in the Purgatory Soul Museum:

Information about each exhibit is translated into several languages.

Location and address of the Purgatory Soul Museum:

The Soul Museum in Purgatory is located on the banks of the Tiber River. It is within walking distance of the Vatican City with St. Peter’s Basilica and the Castel Sant’Angelo, at Lungotevere Prati, 12, 00193 Roma, Italy.

The hours of the Soul Museum in Purgatory are:

Useful things to do for traveling.

We are a non-profit organization, and we have no fixed income. We depend solely on orders and donations from readers, that is, from you. If you have a desire to say “Thank you” and help us, you can do so in any way that is convenient for you.

Museum of the Soul

In this Roman museum of the departed souls, visitors enter a unique mystical atmosphere of the netherworld.

This institution is located within the walls of the sacristy of the Roman church del Sacro Cuore del Suffraggio. This church is in close proximity to the Vatican, within walking distance of it. The decoration of the façade of the church, one could say, echoes the theme of the museum inside. Marble reliefs and sculptures of dead souls can be seen on the facade – they are depicted looking up, as if they are in waiting.

The history of the museum in this institution began in 1912 thanks to the church rector, who was working in the temple at the time. The filling of the museum’s collection began with the appearance of a mysterious nightcap, on which are preserved smudged marks – apparently from the fingers. According to legend, which local people have been telling each other for a long time, this piece of clothing belonged to a widower. Legend has it that the ghost of his deceased wife, Louise le Sénéchel, once appeared before the widower and tore the nightcap from his head and pinched his nose several times as well. All this occurred as a result of Louise’s dissatisfaction with the behavior of Le Senechal after the death of his wife, who did not observe the conditions of mourning for her.

Visitors can feel the peculiar entourage of this institution as soon as they enter it. The formal tradition of obtaining permission to enter the museum from a Catholic priest sets up a special mood. The visitor does not have to do anything supernatural to get it; all he has to do is to say to the priest “Il museo” (“the museum”). There are no other prerequisites for visiting this place. Admission to this museum is free, but if you wish, you can leave a donation at the discretion of the visitor. Also, interestingly enough, there is no ban on photographing objects in this mystery-filled place.

In the museum you can see a lot of unusual things, some of them were collected in Italy, others were brought here from other countries. There are, for example, fingerprints on dishes, clothes, books and other household items; footprints left on floorboards; mysterious symbols on stones. There are certain stories behind these exhibits. For example, a rectangular wooden slab on which a fragment of a hand and a cross are burned looks quite impressive. The history of this object goes back to the XVIII century – in its time, this slab was part of the wooden table top in the office of Isabella Fornari, who was the abbess of the convent of St. Francis in the city of Todi.

According to Fornari’s account, on November 1, 1731, while working in her office, she witnessed an unusual apparition: the soul of Panzini, a previously deceased priest, appeared to her. He told the abbess of the suffering of his soul in Purgatory and informed her that he needed help. To prove that he existed, he touched his flaming left palm to the Abbess’s tabletop, leaving a scorched handprint on it. After that, he used his finger to engrave a cross on the tabletop. Before he disappeared he also touched Fornari’s tunic with his right hand and with this action he burned the cloth and left a burn on Isabella’s skin. Fornari told Isidoro Gadzata, her spiritual superior, what had happened. He drew up an account of what had happened and ordered pieces of cloth to be cut out and a portion of the tabletop to be given to him in order to preserve the material objects in which the story was recorded. After some time, this part of the tabletop took its place in the museum.

Another notable exhibit is a nightgown with fingerprints scorched on the sleeve. According to the story of this piece, its owner was visited by the soul of her mother twenty-seven years after the woman’s death. The reason for her visit was to remind her son of his duty – to order a mass for the repose of her soul. In addition, the mother criticized her son for his lifestyle at the time, asking him to abandon such behavior and return to the Catholic faith. Before her disappearance, like the priest’s soul in the previous story, she had touched the sleeve of her son’s nightgown with her hand, causing her finger to burn through the fabric. As the story goes, the son complied with the dead mother’s requests and then heeded her request for a change in his lifestyle as well and changed his attitude toward the faith.