In the hills of northern Italy not far from Verona stands a V-shaped house called Villa Girasole, which means “Villa Sunflower” in Italian.

Remarkably, just like the flower after which it was named, Villa Girasole rotates on a large turntable, following the movement of the sun across the sky.

This landmark structure is also known as the Spinning House. 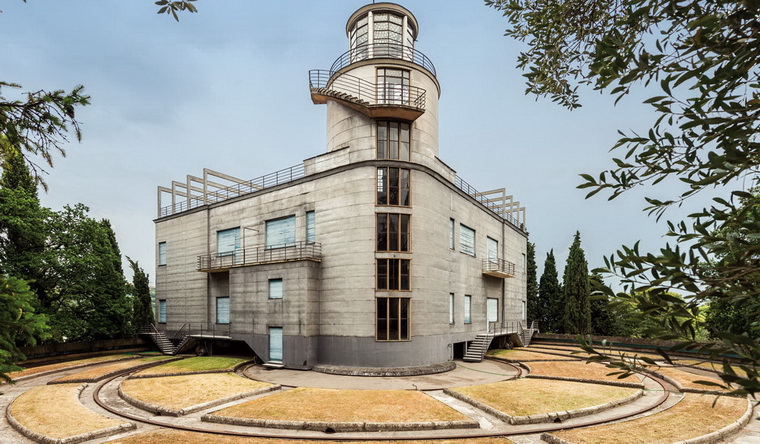 Its owner and part-time architect Angelo Invernizzi designed it so that the house would absorb as much sunlight as possible in order to “maximize its beneficial properties”.

This was a time when there was a new awareness of the beneficial properties of sunlight and its positive effects on health. For example, in 1930 in France, Dr. Jean Seidman built a rotating solarium to treat patients suffering from cancer, tuberculosis and other diseases with sunlight.

The idea for the Villa originated in 1929, the same year Dr. Seidman filed a patent for the solarium building. Angelo Invernizzi, a railroad engineer, applied his knowledge of turning platforms to design the house.

The villa consists of two two-story wings extending from the central section, which has stairs and an elevator. 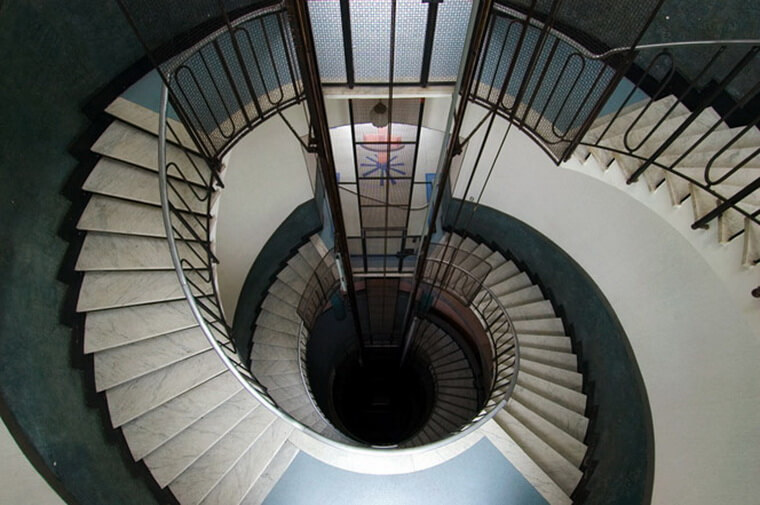 The spiral staircase and elevator inside the rotating house

The base holds the roller bearings under the center post. 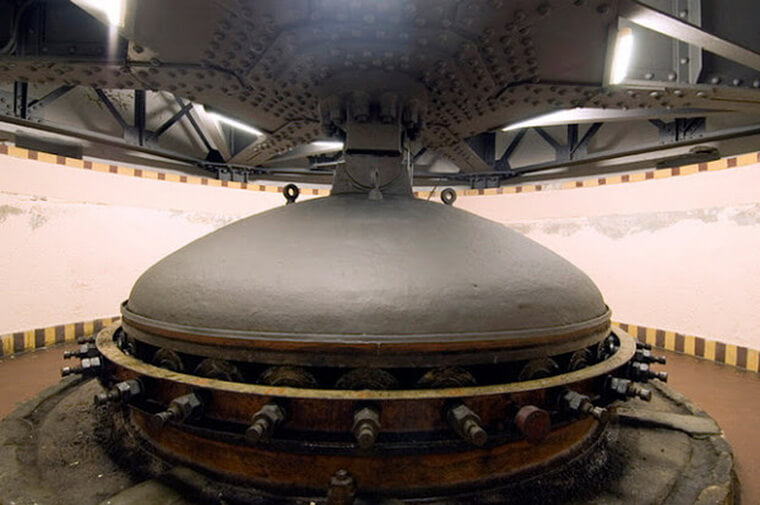 The house sits on a circular base over 44 meters in diameter. The central tower reaches a height of 42 meters.

The entire structure moves on three adapted railroad car wheel supports, driven by two diesel engines, at a speed of about 22 centimeters per minute.

The rotation of the house can be controlled by the occupants of the house with three simple switches – forward, backward and stop.

The first floor of the movable portion is known as the “day area” with a dining room at the end of one wing and a music room in the other. In between are Mr. and Mrs. Invernizzi’s offices. As well as the kitchen, pantry and toilet. On the second floor are the bedrooms and bathrooms, symmetrically arranged along each wing.

Experiments and challenges in construction

Invernizzi had to overcome many problems in designing his rotating house. He experimented with new materials such as concrete and fiber cement. 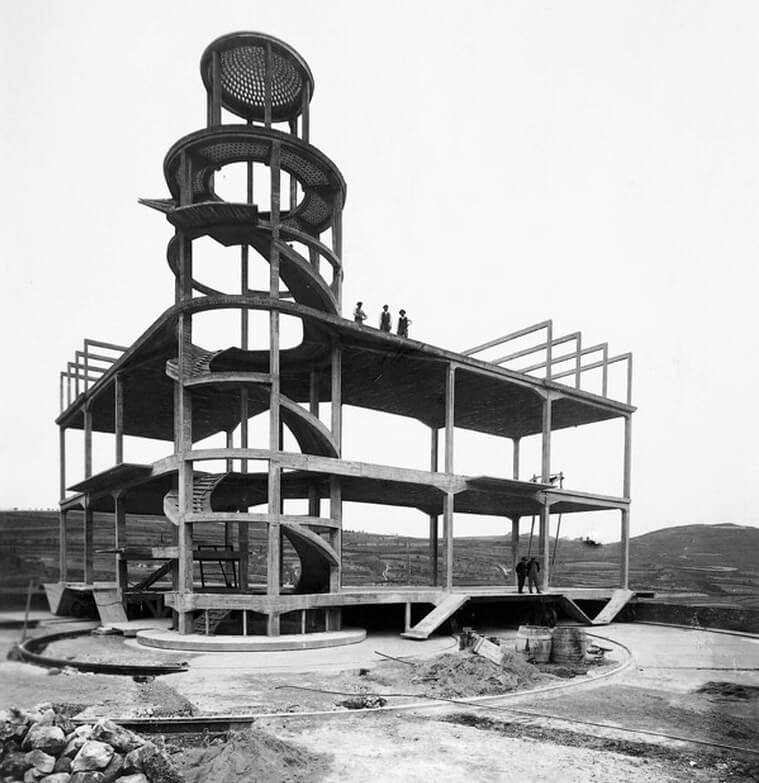 This is what the frame of the villa looked like 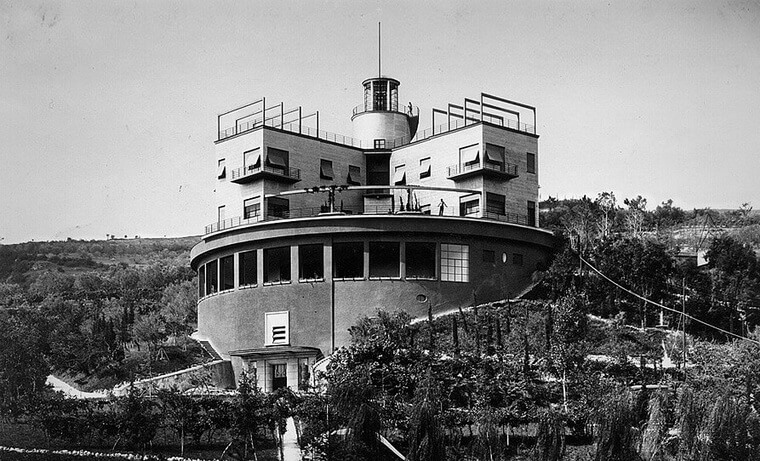 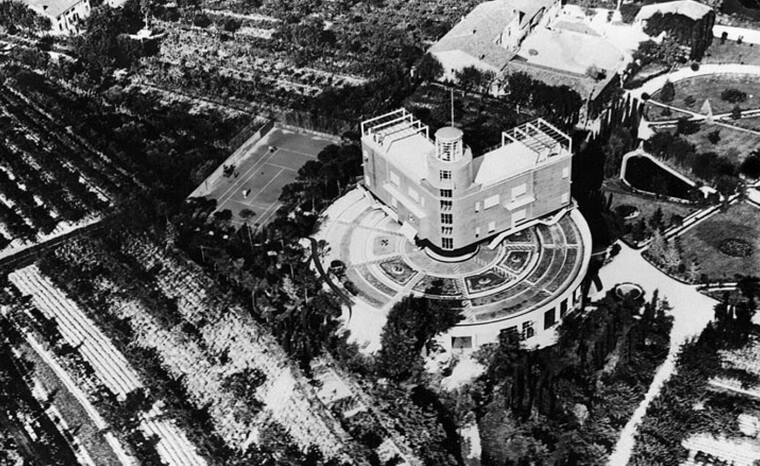 When the outer walls started to crack because of the vibrations during the rotation, he used aluminum sheet instead of the cement finish. Small cracks appeared on the interior plastered walls of the moving part. We had to cover these imperfections with a tarpaulin cover.

Who else was involved in the project

Such a large-scale project is not easy to carry out alone. That is why the owner was helped by the mechanical engineer Romolo Carapacchi, the decorator Fausto Saccorotti, the architect Ettore Faggiuoli and several artists, sculptors and furniture makers.

We would like to remind you that there are places of interest in the world that are created by the efforts of one person. For example, the legendary Coral Castle in Florida was built by just one person. And it is still unknown how he single-handedly moved the multi-ton stones. Or remember the famous colorful Celaron Stairs in Rio de Janeiro. That, too, is the result of one man’s work.

The Spinning House project was completed in 1935. It was an incredible achievement for the time. So for the first few summers, the house spun daily.

Lidia – Angelo Invernizzi’s daughter – recalled more than half a century later, “I remember my father sitting at the edge of the terrace, looking out at the landscape, staying there for hours, very relaxed and peaceful.

Unfortunately, the building is no longer rotating now. 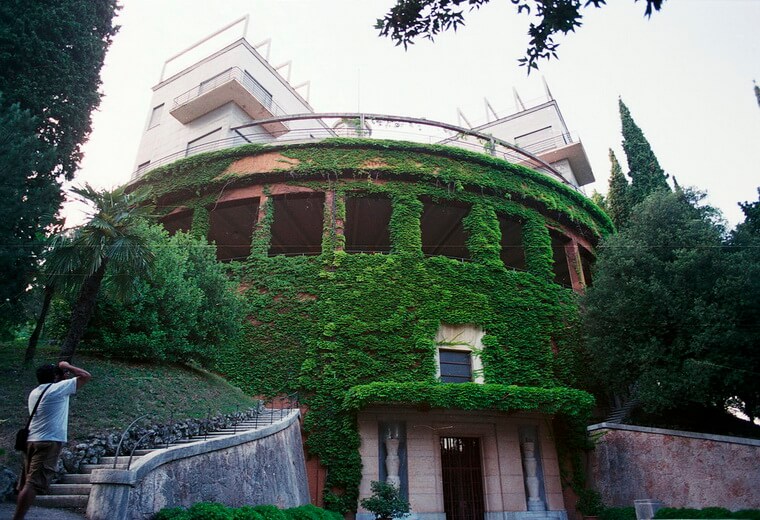 This video (although in Italian) will help you learn more about this extraordinary attraction in Italy.

All about the project from Italy

In the second half of the 20s the talented Italian engineer Angelo Invernizzi, inspired by the seminal writings of Corbusier, decided to build in his native Marcellese, near Verona, an unusual country house for his family, an almost literal reproduction of the “machine for living” principle – a building that would rotate. According to Invernizzi’s bold imagination, the house was initially only supposed to rotate by 180°, but during the construction and testing phase it was launched into a full 360°, turning it into a “Sunflower” itself, which faithfully follows the sun like an observatory following the stars. 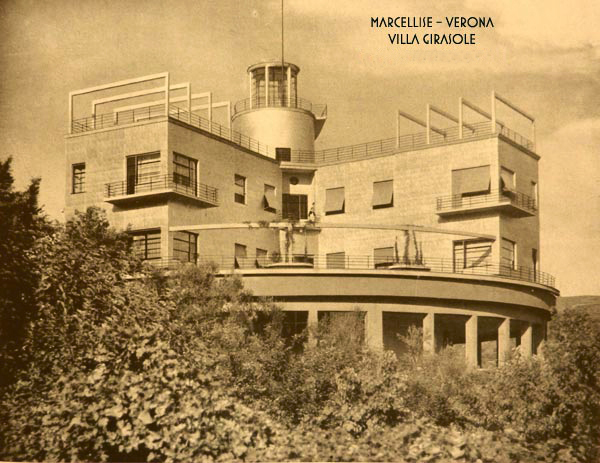 Bold ideas of a mobile home visited many architects and engineers. One such project was created in 1934 by the famous Pierluigi Nervi, but was never realized. The building in question can be seen as a unique object of materialized science fiction. The metaphorical house was supposed to resemble a sea liner, like Captain Nemo’s house, forever moored in the hills of Verona. In the finishing of the facades with sheets of aluminum alloy, the shape of its metal railings and terraces, reminiscent of the deck, the light tower that crowned it – similar to the captain’s cabin or lighthouse. The engineer Invernizzi designed the entire structure himself in reinforced concrete, including a mobile shaft with a system of columns and platforms distributing the load and collecting it below on a single mobile support designed along the lines of railroad mechanisms.

And so, from 1929 to 1935, having found two more like himself ideological romantics, “accomplices” of the realization of his dream, Angelo proceeded to its realization. A guest architect and family friend Ettore Fagiuoli (in addition, a talented scenographer and vedutist) was in charge of the aesthetic side. Most likely it was thanks to him that a certain touch of Art Deco appeared on the façade of the non-mobile base, the main entrance, the circular loggia with the colonnade and in the specially designed interiors of the villa. Futuristic features reminiscent of aeronautics in the fundamentally differently designed façade of the mobile, private part of the house are the undoubted work of its owner Invernizzi.

READ
The Atlantic Road and the bridge to nowhere. Norway. Description, photos.

The movement of the building was designed by another engineer, the third in the team, Romolo Carapacchi, based on principles used in railway locomotives (rails and carriages) and in electrical engineering (motors).

Two symmetrical, right-angled wings of the building’s residential block, closing the terrace-solarium sector between them, constituted the mobile living portion, which rotated over the non-mobile cylindrical volume of the villa. The entire mass of the house on a platform of reinforced cement rested on wheels similar to those of a railroad, which moved along concentrically laid rails of the so-called parterre . On each of the rails moved the necessary number of carriages to support the weight of each of the sectors of the house. Radial beams of reinforced concrete distribute the weight of the building evenly on each of the carriages. The speed of rotation, as laid down by the engineer, was 4 mm/sec, giving a complete revolution in 9 hours and 20 minutes, both clockwise and counterclockwise. The first launch of the Sunflower in motion with the general excitement of engineers, builders and friends took place on November 14, 1933.

Though it is a bit boring to list all these technical data, they give a clear picture of the engineering and constructive genius of its three creators. So, the rollers, located in a ring at the base of the living level, transmit motion to the entire mobile part of the building, including the elevator shaft. The house was propelled by two motors of three horsepower each. The weight of the stairwell, elevator cage, spiral staircase and tower (about 15 tons!) was supported by six reinforced concrete columns resting on beams that distributed it on a hexagonal steel structure, and finally on a single mobile support at the base of the shaft with a thrust pedestal placed on the axis of the mobile part.

The total height of this structure from the bottom of the well to the top of the light tower is about 42 meters. The apotheosis of the villa in its romantic technology is, in addition to the stairwell, the tower, or lighthouse, which crowns the building and rises two more stories above the roof of the apartment building, with its aerial metal staircase.

Light through the lantern of the tower penetrates through numerous glass lenses embedded in place in its cement skeleton and pours down to the bottom, illuminating the elevator shaft and working mechanisms of the support.

This eccentric, costly and original construction by the engineering genius Angelo Invernizzi and Romolo Carapacchi takes us back to an era, already distant and romantic, when man believed in the creativity of progress and in his own omnipotence, typical of the early twentieth century. The time when an ordinary (or not quite) European engineer could afford such exertions in construction and was able to maintain the operation of such an inexpensive “toy”. Unfortunately, due to problems with the soils and shifting of the supporting axis, the Villa Girasole is currently immobile, and is fixed in its most representative, symmetrical position from the side of the main entrance.

In the early 2000s, Angelo’s daughter Lidia Invernizzi entrusted the villa to the Mendrisio Academy of Architecture in the Swiss canton of Ticino, largely because the famous architect Mario Botta was in charge there. Better to entrust the family treasure to a proven specialist, the venerable signora correctly decided.

Today the fate of the villa is in charge of a specially organized Fondazione Il Girasole, with the participation of the local bank Cariverona – all with the hope, of course, that the funds (millions) will be found for its comprehensive restoration, and new engineering geniuses will be sought who can be at the level of those, 80 years ago. The foundation is now located not in Switzerland, but very close by, in beautiful Verona. It also organizes the visits of numerous architectural and simply curious “pilgrims”, who come in waves to the hills, attracted by the legendary architectural structure, diluting the provincial silence of the old park with polyphony and multilingualism.

Until her death at the age of 96 (!) in July 2014, Signora Lidia believed her villa would turn again. And all this time the unique interiors of the Sunflower have been exceptionally preserved by her efforts, until very recently: furniture, lamps, dishes, wallpaper, paintings, pretty knickknacks, even sheets – according to the owner’s own statement, everything remains as it was in her childhood years, when for fun she and her brother Lino used to turn her House back and forth, pressing the start button one after the other. Lydia herself used to spend the warm season here from late spring to September until 2004. These interiors are just a living school of Art Deco style. Now, after her departure, the living arrangements have unfortunately been disassembled, catalogued and packed away for the first time. Until that happy time, hopefully, the villa will regain its primary ability to follow the sun.