The Royal Mile is a succession of streets in the center of Edinburgh, one of the main attractions of the city, Scotland.

The Royal Mile is a neighborhood in Edinburgh where, literally, there are landmarks at every turn. The history of the name Royal Mile goes back to David I, who granted local merchants the right to trade at the foot of Castle Rock. The market was connected to the castle by the High Street, which in those days was called “King’s Street.” As the street happened to be exactly one Scotch mile long (1.8 km), it was also popularly known as the Royal Mile. Later the toponym stuck and took the official form for the name of the historic quarter.

Royal Mile consists of 4 consequently turning into each other streets with adjacent alleys and dead ends.

The beginning of the Mile falls on the Castle Esplanade, now used as a square for parades. In the first rows of houses closest to the castle is the Whisky Heritage Centre, which contains a grand collection of the drink from various regions of Scotland. Nearby is the Camera Obscura, a museum of optical illusions that was very popular in the last century.

Below begins Longmarket Street, the buildings on which completely correspond to its name: every inch of the square is occupied by shops, stores and offices, obsessively offering their products to passers-by. It’s worth noting that some of Scotland’s finest kilts are sold in the area and are often bought by tourists as a stylish and easily recognizable Scottish souvenir.

Even further down is the very High Street. Today it is the center of Edinburgh’s social life and there are regular public forums, concerts, festivals and performances by street musicians and dancers. Many tourists like to take pictures next to the Heart of Midlothian, which is laid out in stone paving stones exactly where Tolbut Prison used to stand. Also on the High Street is the museum of Knox, the Scottish religious reformer.

The name of the last street of the Mile – Canongate , which means “monk street”, speaks for itself. This street in the past housed all the religious institutions of Edinburgh, which were inseparable from most social institutions. Therefore, apart from Canongate Church, this street also houses universities, orphanages, a history museum and the Scottish Parliament, which crowns the Royal Mile.

There are dark legends about the Mile among the people of Edinburgh, connected with the plague epidemic. In the Middle Ages doctors thought that the “black death” is transmitted by direct contact with the sick, though, in fact, the plague carriers were rat fleas. Thus, at one time the Mile was blocked off, blocking all exits for a month, and every single inhabitant of the quarter died out – some from the plague, some from starvation, and some, exhausted, were bayoneted to death by the gendarme cleaners. It is said that in some of the alleyways since then, the ghost of a little crying girl has been regularly seen, huddled in a corner, calling on every passerby for help. Although such a situation may well be a trivial prank on the part of locals who speculate on the legend.

Even without the history and urban legends, though, Edinburgh will appeal to lovers of lavish celebrations. It’s hard to believe, seeing the grim old colonial buildings, but the Scottish capital is the city of festivals of the world. Each year in Edinburgh there are more than a few hundred, each with its own intricate concept.

The festival of bagpipers is amazing: hundreds of people from all over Scotland fill the air with the sound of this unusual instrument – so that even the castle walls vibrate.

Theater aficionados will love the Fringe Festival, the only event of its kind in the world that combines classical theater with surrealist psychedelia.

READ
All provinces of China, alphabetical description and list 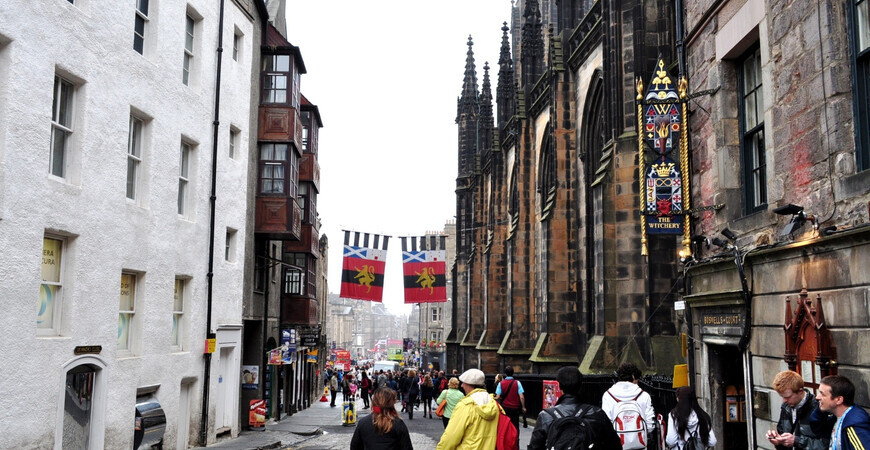 The Royal Mile is considered one of the major tourist attractions in Edinburgh, Scotland. It is hard to imagine Scotland’s most famous tourist places without it. It is a succession of streets located in the heart of the city, considered a true historic and tourist Mecca. The streets connect Edinburgh Castle with the Scottish Parliament building. Total length of the road is about one Scottish mile – 1.8 km, it is longer than the British by about 200 meters.

Essentially the Royal Mile is four streets that follow each other in a single line, from west to east: Lonmarket, Castlehill, High Street and Canongate. But these streets have dead ends as well as many side branches. Along the streets are old mansions, mostly 15th century. They are nicely set up with stores with authentic traditional Scottish goods and souvenirs – wool, whisky, etc. There are quite a few museums in the old buildings – Edinburgh Museum, Scottish Whisky Heritage Centre and John Knox Museum, for example. There are also temples of tourist value here – Canongate Church and St. Giles Cathedral. There is never a dull moment on the Royal Mile – in addition to the large number of tourists and locals, there are often street performers here to entertain the public.

The streets of the Royal Mile

READ
The Coral Castle in Florida and its mystery

In the first half of the 12th century King David I of Scotland decided to settle at Castle Rock, a fortress which he later rebuilt as Edinburgh Castle. At the foot of the castle, on Lawnmarket, trade began. The king then decided to build the High Street, which then had the name Via Regis (lit. “King’s Way”). Presumably, from “Via Regis” the name “Royal Mile” originated.

The buildings, mostly of wood, that stood along the street usually bore the names of their owners. Older buildings also retained this tradition. Near the houses at the time, in courtyards, livestock were raised. King Henry VIII of England rebuilt houses that had been burned by the English when the Anglo-Scottish conflict occurred. In 1591 new buildings made of stone were erected, but the courtyards at the time were of similar sanitary conditions, although it was mainly the nobility who lived there and often planted gardens in the courtyards.

READ
Newfoundland and Labrador in Canada, photo and description

In the middle of the seventeenth century, the Old Town became too overcrowded, with about 70,000 people living along the street. The problem was also that sometimes one room could be shared by about 10 people, in buildings which could be up to 14 stories high. In the 18th century, they decided to expand the city. With the construction of the New Town, the problem of overcrowding was solved by itself. From 1865, Lord Provost William Chambers built Blackfriars Street and St. Mary’s Street. In the 1880s, the biologist Patrick Geddes continued the construction of the houses and the courtyards and gardens were built according to plans that replicated the Royal Mile 500 years earlier.

You can get to the Royal Mile from the side of the Scottish Parliament building by getting off at the Scottish Parliament bus stop – bus number 35. To get to the street from the Edinburgh Castle side, you should get off either at the Mound Place (Stop MA) stop – bus № 23, 27, 41, 42, 67, or at the Grassmarket stop – bus № 2. From these stops it takes about 2 minutes to walk to the castle. There is also a Skylink 300 bus service along the Royal Mile.

In addition, you can reach the street by car or cab. There are cab services in Edinburgh such as Central Taxis, FestivalCars, and CityCab.

From Edinburgh Airport you can get on the Airlink Express bus, which runs daily, from 4:15 to 00:00, every 10 minutes from Platform D. On the night bus number 22, daily from 0:15 to 04:00, bus runs every 30 minutes. Or take bus number 35, which runs Monday through Saturday once every 15 minutes and on Sundays once every 30 minutes. There is also a streetcar from the airport, once every 8-10 minutes on weekdays and once every 12-15 minutes on weekends (to York Place).