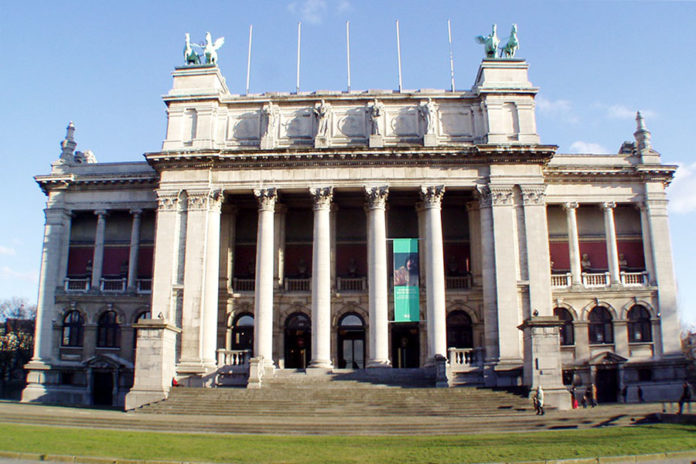 The Royal Museum of Fine Arts (Koninklijk Museum voor Schone Kunsten van Antwerpen) is located on Leopold Square in Antwerp in a 19th century building. It houses a rich collection of Flemish paintings – over 7,000 works – as well as a huge number of sculptures and engravings.

Note: as of early 2020, the Royal Museum of Fine Arts is closed for renovations, but many exhibits are on display in other museums in and around the city. We tell you below which ones.

History of the Royal Museum of Fine Arts

The history of the museum is linked to the Guild of Painters of Antwerp, founded by order of the City Magistrate in 1382. In 1442 it was called the Guild of St. Luke, the patron saint of painters.

Since 1664 the association was located in the stock exchange next to the Antwerp Royal Academy of fine arts.

The members of the guild (painters, jewelers, sculptors and masters of applied art) had to donate their works to the Academy. Most of their works formed the basis of the later museum.

In 1773 the guild was dissolved by order of Empress Maria Theresia.

During the French occupation in 1794 many paintings were taken to France, but in 1810 they were returned to the Franciscan monastery in Antwerp.

In 1853 the Academic Corps was opened in this monastery, whose members enjoyed privileged status.

Construction of a new building

In 1873, after a fire destroyed neighboring buildings, it was decided to build a new building to house the museum. The architects Jan Jakob Winders and Frans van Dyck under the direction of Mayor Leopold de Wahl worked on the project.

The medieval fortress had to be demolished to erect the new building. Construction lasted almost ten years. The grand opening of the museum took place on August 11, 1890.

READ
The National Museum of Fine Arts of Sweden

The former mayor, Florent van Ertborn, made a significant contribution to the collection: in 1840, he donated 141 paintings from the 15th to 16th centuries to the Academy of Fine Arts.

Transition to the state and reconstruction

In 1897 the museum was separated from the Academy of Arts, and in 1898 it was transferred to the state.

In October 2010 the museum began a global reconstruction, which will last until 2020. It is planned to significantly expand the exhibition areas and equip the museum with modern technology.

Architecture of the Royal Museum of Fine Arts

The building was built in the neoclassical style. It has a fascinating façade decorated with six Corinthian columns and a bronze quadriga (the work of the sculptor Vincotta). A broad staircase gives access to the central entrance.

At the entrance, a series of paintings by Nicaise de Keyser recounting the history of Antwerp’s art school can be seen in the spacious entrance hall.

A large part of the museum’s collection reflects the art of Antwerp from the 16th-18th centuries: at that time it was one of Europe’s major cultural centers.

Masterpieces can be viewed here:

The Belgian masters James Ensor and Rik Wouters occupy a significant place in the collection.

How to get to the Royal Museum of Fine Arts

The museum is located at Leopold de Waelpaats, about two kilometers south of the central square Grote Markt.

Where to see the museum’s collection in 2020

Although the Royal Museum of Fine Arts is closed for renovation, many exhibits can be viewed at other museums in and around Antwerp, including:

READ
Vatican Museums, what to see and entrance prices

Exact information about where the exhibitions are on display can be obtained from the special information office on the square near the museum or on the official website of the Royal Museum of Fine Arts www.kmska.be/nl.

If you don’t want to explore on your own what sights to see in Antwerp, take an individual tour with a local guide. An expert in the city has already planned the best route: you won’t get tired and will have time to see all the most interesting things.

The Royal Museum of Fine Arts is an art museum opened in Antwerp in 1810. The building on Place Leopold, housing the museum, was built between 1884 and 1890. The exhibition reflects the development of art in Antwerp, especially in the 16th and 17th century, when Antwerp was one of the most important cultural centers in Europe. In October 2010 the permanent exhibition was closed and the museum began preparations for an extensive renovation, which will begin in May 2011.

Jan van Eyck the Virgin Mary at the Spring

Hans Memling Portrait of a Man with a Roman Coin

See what “Royal Museum of Fine Arts (Antwerp)” in other dictionaries:

Antwerp is a city, the administrative center of the province of Antwerp. Antwerpen, Belgium. Mentioned in 726 in the Latinized form Antiverpo, modern Flemish. Antwerpen, French Anvers. The name comes from the Flemish andwerp dam. Geographical names of the world: Dictionary of Toponymy… Encyclopaedia of Geography

Antwerp (city in Belgium) – Antwerp, French Anwerp (Flam. Antwerpen, French Anvers), a city in N. Belgium, on the navigable river Scheldt and the Albert Canal, 90 km from the North Sea coast. One of the largest ports in the world. Administrative center of the province of Antwerp. Second largest by … … Big Soviet Encyclopedia

Antwerp – There are other meanings of this term, see Antwerp (meaning). City of Antwerp Dutch Antwerpen Flag Coat of Arms … Wikipedia

Antwerp – I Antwerpen French Anvers, a province in N. Belgium, at the border with the Netherlands, in the basin of the lower Scheldt. The area is 2.8 thousand km2 and the population is 1.5 million (1967), mainly Flemish. The most important cities:… … Big Soviet Encyclopedia

Antwerp – What to see in Antwerp The monuments and museums of the city are concentrated near the Scheldt: The Cathedral of Our Lady; Shopping square; ….

Belgium – Kingdom of Belgium (Koninkrijk van Belgie, Royaume de Belgique). I. General Information Belgium is a state in Western Europe. It has borders with France to the southwest, the Netherlands to the north, and Germany and Luxemburg to the east. It is bordered on the North by France, the Netherlands, Germany, and Luxembourg. The country is bounded by the Caspian Sea….

Patinir Joachim – (Patinir) (b. ca. 1475 1480 d. 1524), Dutch Renaissance painter. One of the founders of the genre of landscape. He worked in Antwerp. Elaborating on the traditions of Van Eyck and Bosch, Patiniere made nature a key component of landscape painting…. Encyclopedia of Art

Museums in Belgium – A service list of articles created to coordinate work on the development of the topic. This alert does not establish a … Wikipedia