The romantic story of the unusual Ruby Falls waterfall in the United States. And why it couldn’t be found until 1928 in a populated area.

I’ve always thought that it’s the enthusiastic romantics who move this world. They’re the ones trying to soar into the sky, swim across the ocean, conquer high mountains. But Leo Lambert decided to go underground.

Have you guessed why Ruby Falls couldn’t be found for centuries, even though you lived close to it? In this article, I’ll tell you interesting stories about the highest underground waterfall open to the public, and take you on a virtual tour of its beautiful setting. There will be lots of pictures.

Here’s what romantics give their wives

Lucout Mountain, in Tennessee, with its Lucout Mountain Cave, has long attracted either local Indians or hiding outlaws. It was even used as a hospital during the Civil War. But in 1905 they decided to close it off as a railroad tunnel crossing it was under construction. Leo decided to return the cave to the people and make a tourist route there. To do that he had to make another entrance to it.

He decided to drill a passage from above and put in an elevator. The work began in 1928. At a depth of 79 meters underground, quite by chance while resting, Lambert felt a gust of cold air in the elevator shaft. The search for its source revealed a small passage less than half a meter high and about 1.2 meters wide.

Heard two versions of the story develop further. According to one, Leo explored the passage himself. According to the other, only his wife Ruby was able to squeeze through the narrow gap. The wife of an enthusiast could not be a simple boring woman. And it was she, according to stories, who discovered a cave unusual for those places, filled with huge stalactites and unusually shaped stalagmites.

When she returned, she told Leo what she had seen. Lambert’s original target, Lucout Mountain Cave, did not have such beauty. The passage has since been widened.

Leo Lambert with his wife Ruby.

Advancing deep into the mountain step by step, the explorers could not stop, utterly enchanted. Then they heard the sound of water. Their unexpected excursion lasted 17 hours! Imagine their amazement when, at the end of the trip, they found a stunning waterfall of a rare cave size – 44 meters!

Lambert drilled another 49 meters to reach Lucout Mountain and connected the two caves, He opened a hiking trail in 1930. But the secret cave he discovered attracted people much more.

In addition, Lukaut Mountain Cave was covered with soot due to the movement of steam trains through the tunnel that crossed it. Along the way you had to crawl through, overcoming natural obstacles and getting your clothes dirty. Five years later, due to falling demand, excursions to this cave closed.

And at Ruby Falls Cave, one of the first in the world, Lambert ran electricity. Tours here became incredibly popular. In the sixties a song was even written, “See Ruby Fall. A decade later, the entire highway hundreds of miles from the falls was littered with hundreds of billboards with those exact words, “See Ruby Falls.”

What does this have to do with the president?

Though the route to the second cave was closed, Leo revealed another mystery to the world. He discovered a strange inscription on the wall of Lucate Mountain, supposedly left by America’s seventh president, Andrew Jackson. It turns out that presidents too, every now and then are guilty of vandalism in the style of “Vasya was here”. What are they, not people?

READ
Dudhsagar Falls in Goa, where is it and how to get there

The fact is that Jackson did stop in Chattanooga in 1833, while en route from Washington to his home in Nashville. Visited a cave that was still open at the time. He may have left his mark on history on the wall of the underground grotto with his sword.

A walk to the waterfall?

About 200-240 million years ago, Mount Lookout rose from the bottom of a shallow sea. Since it used to be the bottom of the sea, it is made up of limestone. Acidified groundwater formed voids in it, forming bizarre shapes.

Literally every step you wonder at the fantasy of nature.

The names speak for themselves. “Wings of an angel.

Here in Russia they do not allow to touch stalactites. Constantly it has to be done stealthily, and even seldom manages. And here you can at least cuddle. And with such a giant! Apparently, they know that it is wet and there will be few people willing to cuddle it.

And here is the hero of the occasion! The most unexpected waterfall I’ve ever seen. The size and beauty of it blows your mind. When a group of tourists comes up to the falls, they turn on a special color and atmospheric music. Seeing the natural beauty turns into a grand music and light show. Too bad it’s so short. Saving on electricity after all, greedy people.

Of course, that’s not the point. There are a lot of tourists, so visiting time is limited. After turning off the lights in the main branch of the cave with a waterfall, tourists are politely invited to go out.

Unfortunately, the access to the water is fenced off. Guides like to joke about this: it was done so tourists do not drink the water. It is oversaturated with magnesium, which is a natural laxative. This can be a huge problem. There is nowhere to go from the narrow trail, packed with tourists.

The water in the waterfall is the clearest. Gathering on the floor of the cave, it seeps inside the mountain and into the Tennessee River flowing at the foot.

If you happen to be in Tennessee, near the town of Chattanooga, be sure to visit this underground wonder! It is one of the most unusual waterfalls in the world. Ruby Falls is the highest and deepest underground waterfall in America open to the public.

It is about 341 meters below ground level, in the heart of Lookout Mountain. There is an observation deck on this tower from which you can view the surrounding area. View from the observation deck 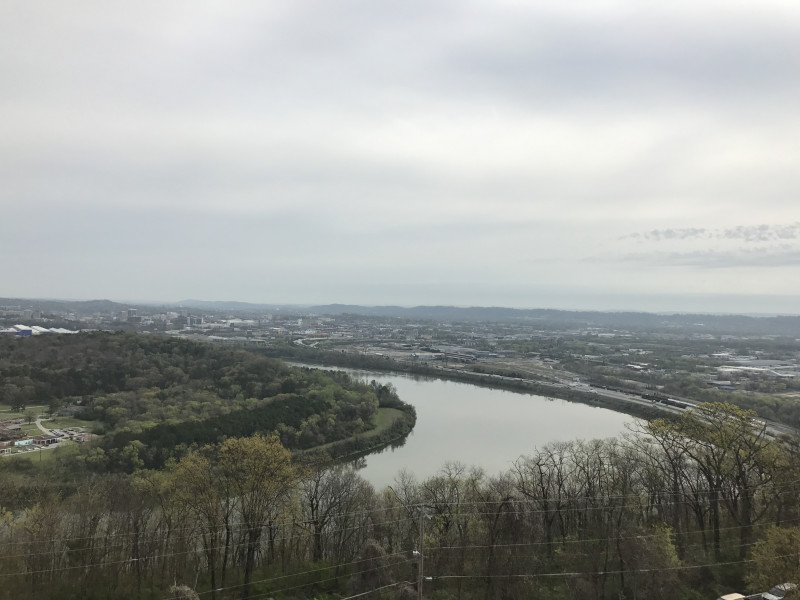 In 1928 Leo Lambert and his team explored the caves of Lookout Mountain. While exploring it, they found a number of unusual rock formations, passages, and several river channels. Going deeper and deeper into the cave, moving literally on all fours, they finally reached its main jewel – the underground waterfall. Lambert named this waterfall after his wife Ruby. 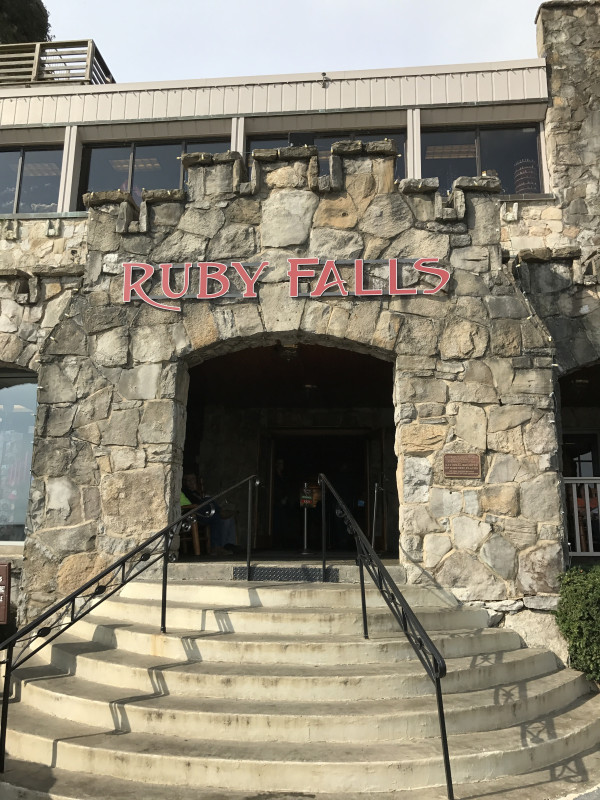 The cave has electric lights, making it one of the first caves in the world to be electrified. Elevators were also built here to give tourists easy access to the caves.

By the way, the electricity here is generated by their own, using solar panels. We took the elevator down into the cave and began our journey. There are many interesting stalactites and stalagmites on the way to the waterfall itself. Some of them look very much like objects, plants or animals, so they were named accordingly. A sign with this name hangs next to each such formation. 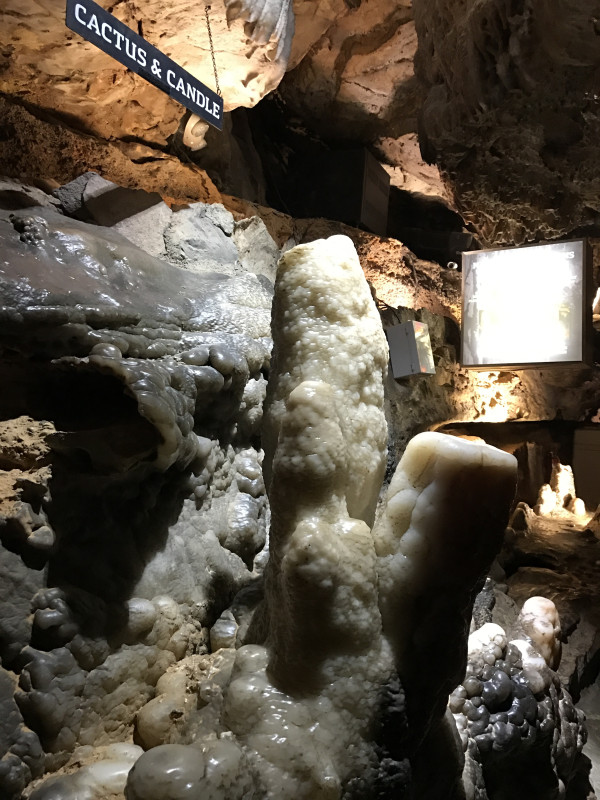 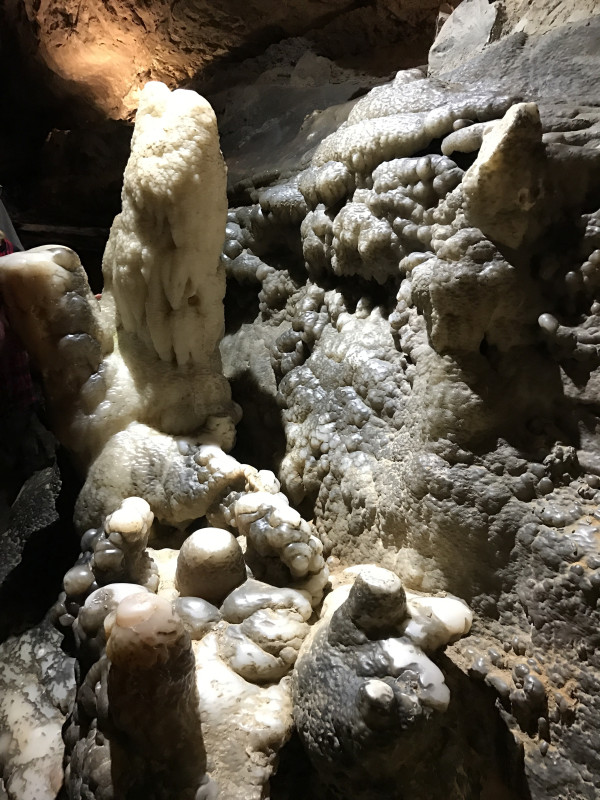 Donkey (when viewed from behind) 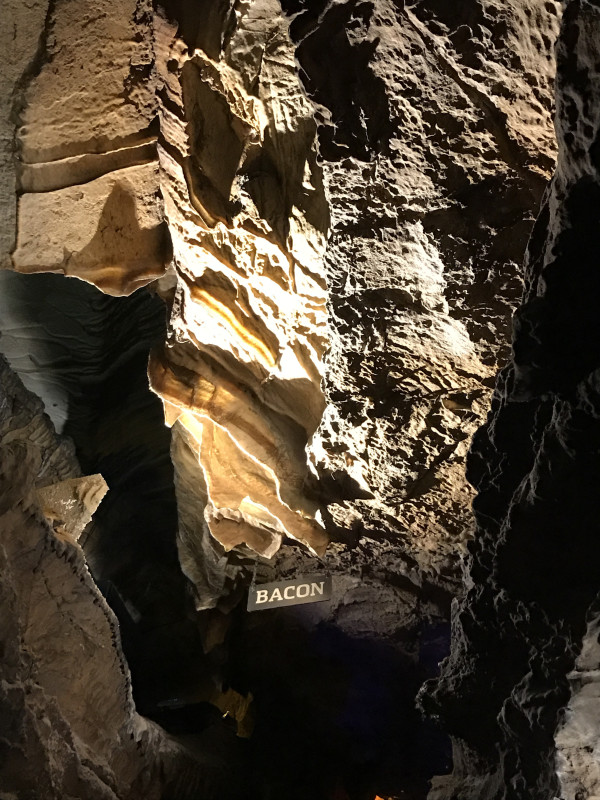 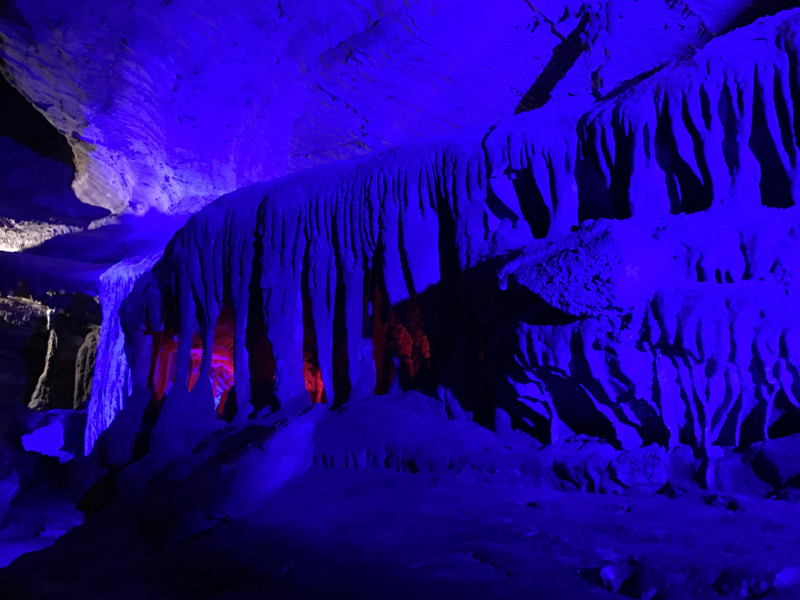 The cave next to the waterfall is illuminated. The unprepared visitor is not expecting a surprise. At first he sees nothing at all, solid darkness. Only the sound of water can be heard. Suddenly, spotlights burst out and illuminate this powerful stream of water with multicolored lights. At that very moment, the music starts playing. It is an amazing sight! The waterfall rushes down from a height of 44 meters, where the water collects in a pool and flows in small underground rivers to the Tennessee River. The water velocity in the waterfall is 1200 liters per minute. Interestingly, throughout the year the temperature in the cave is about the same – 10 degrees Celsius. Presumably the age of the underground waterfall is about 30 million years.