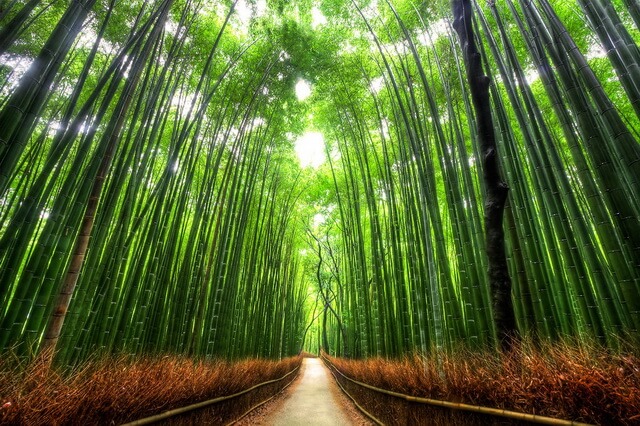 The Sagano Bamboo Forest is one of the most amazing places on the planet. The forest is also often called the Sagano Bamboo Grove. The grove consists of thousands of thin tall and very strong bamboo trees growing in even rows.

The bamboo forest is located in the Arashiyama Park on Japan’s largest island, Honshu, a 20-minute drive from Kyoto. Also in this park is a Zen Buddhist temple Tenryu-ji, which fell under UNESCO protection. 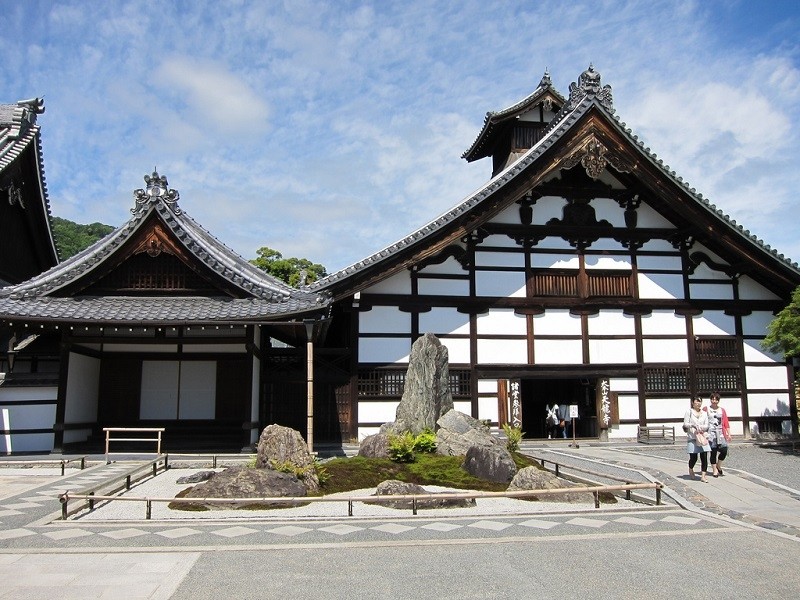 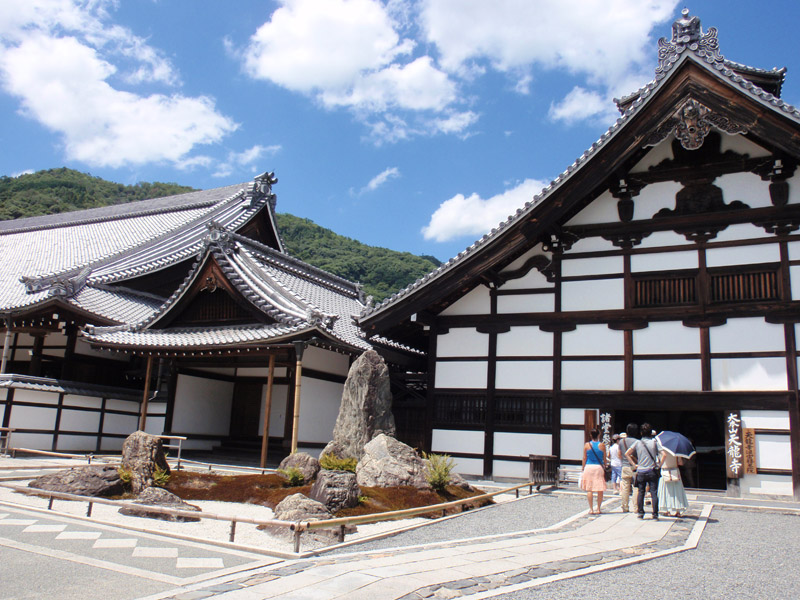 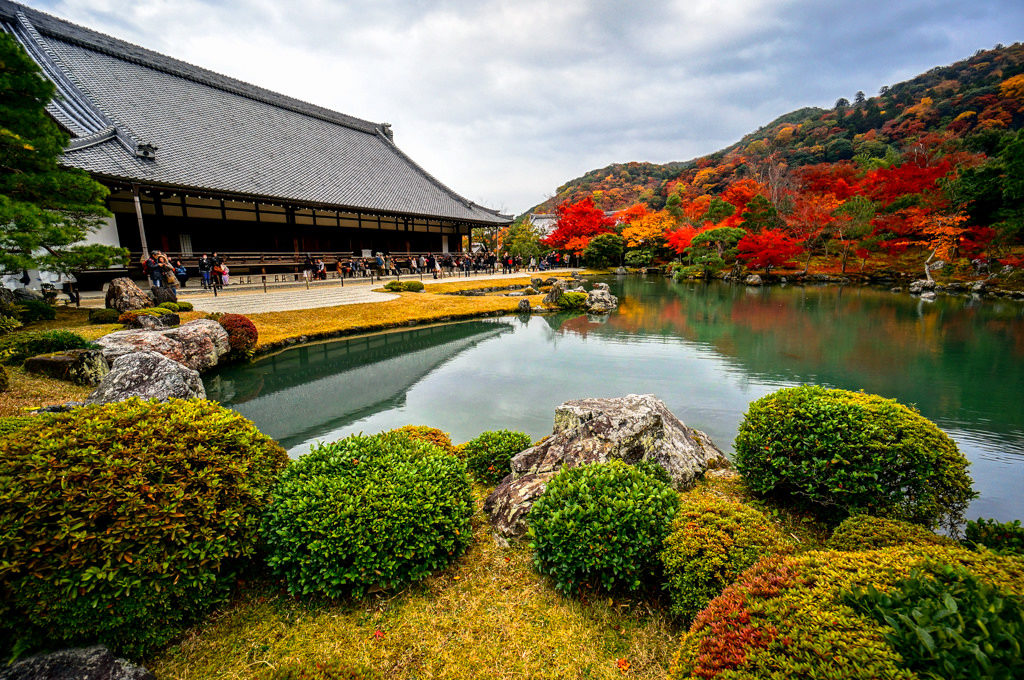 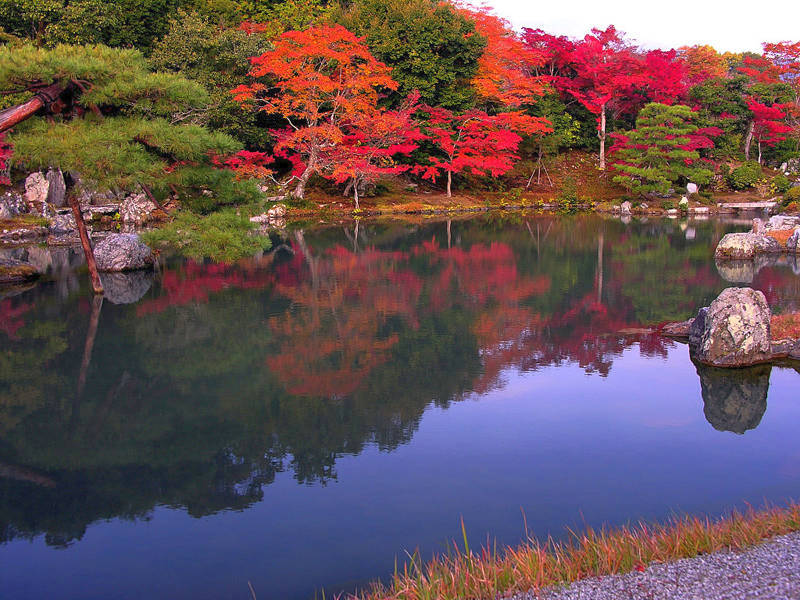 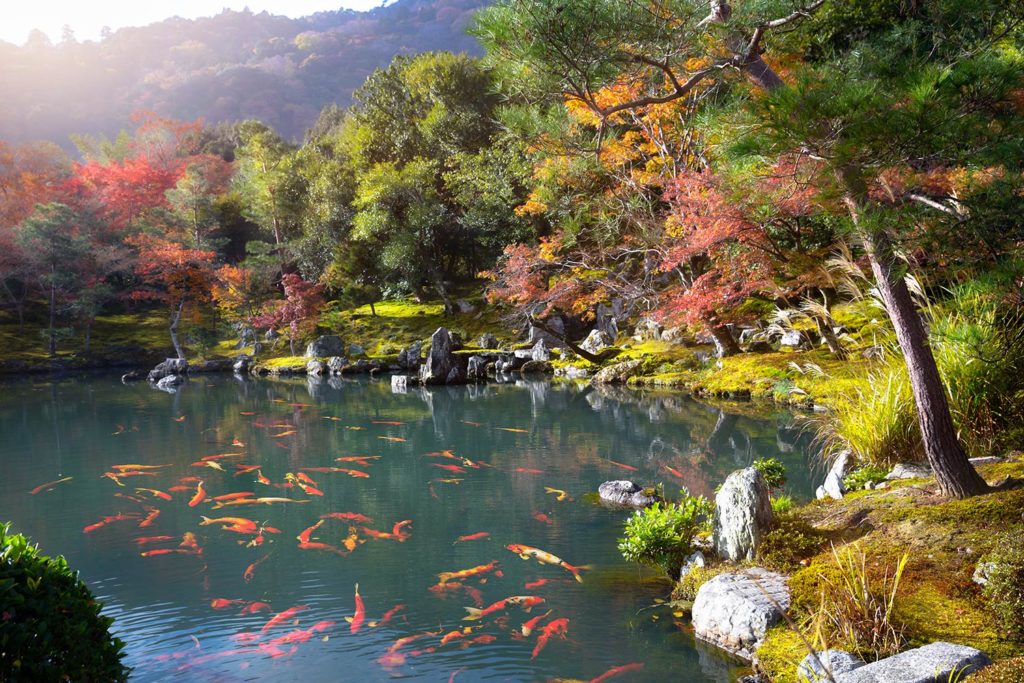 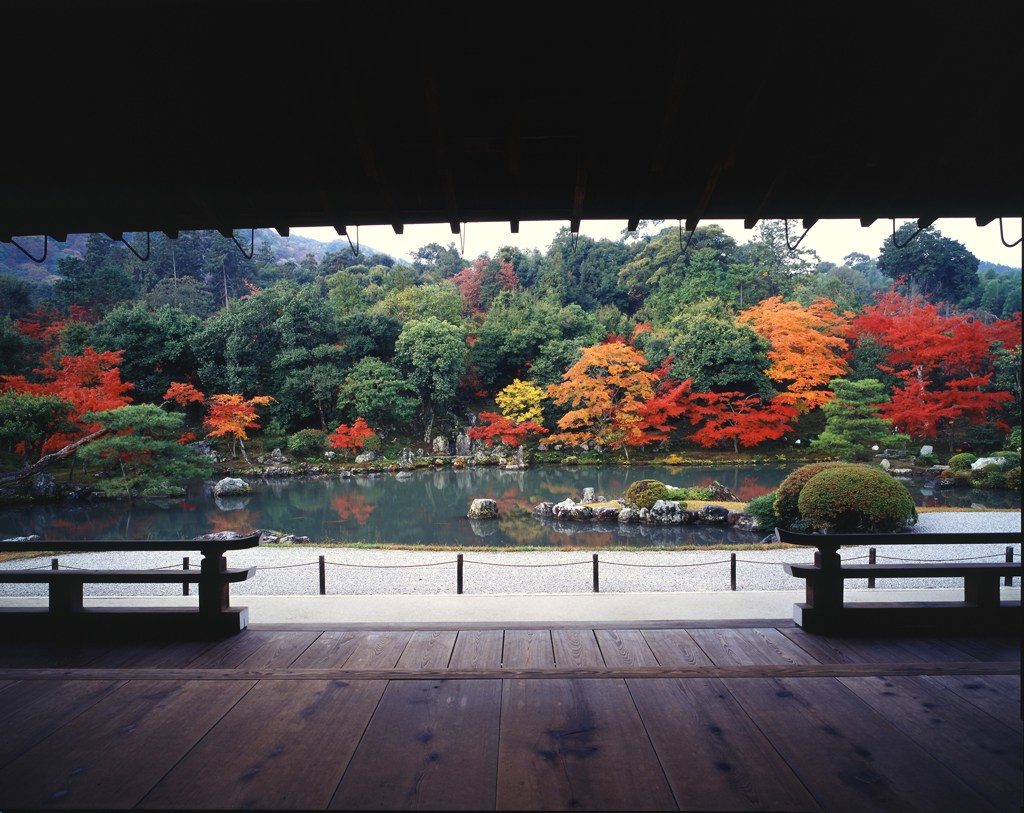 Huge popularity of this place has received not only because of its amazing beauty, but also because of the fantastic sound that occurs during the light breath of wind. Visitors to the bamboo grove assure that this sound, similar to a piece of music, has an inexplicable calming effect. The bamboo swaying in the wind makes incredible sounds. They are unlike anything else. It is impossible to find any resemblance to the usual sounds of the forest. Many visitors to the park claim that here you can not only relax, but even understand the meaning of life. Moreover – for the time spent in this forest, you can quickly remove the accumulated psychological stress, which you will not be guaranteed a visit to a therapist. That’s why the Japanese government deservedly put the melody of the bamboo grove on the list of “one hundred sounds of the country that should be preserved”. 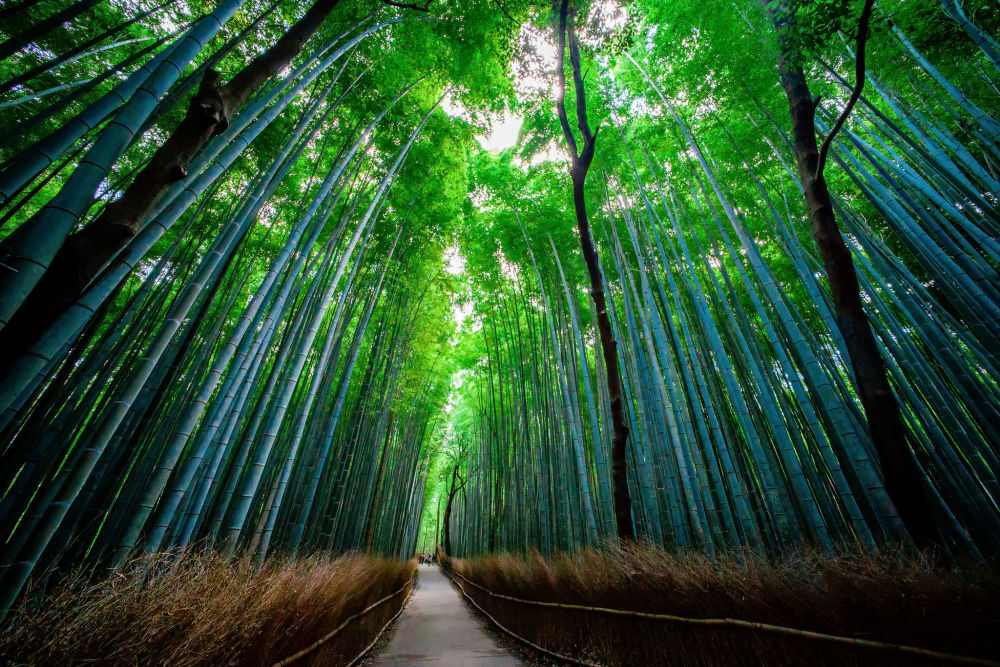 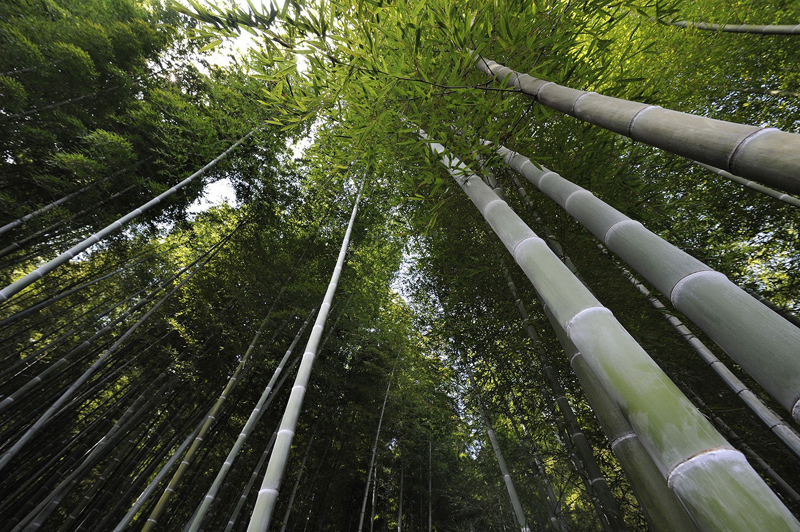 The history of the bamboo grove dates back to the 14th century. It was then that a Japanese monk, Muso Soseki, brought to life the idea of creating this picturesque park. Now the Sagano Bamboo Forest covers an area of 16km2. Through the bamboo plantations are cut footpaths for walking, which at night are illuminated with small colorful lanterns, creating a cozy atmosphere. The paths are surrounded by a low fence made of dried bamboo stems – it looks very natural. 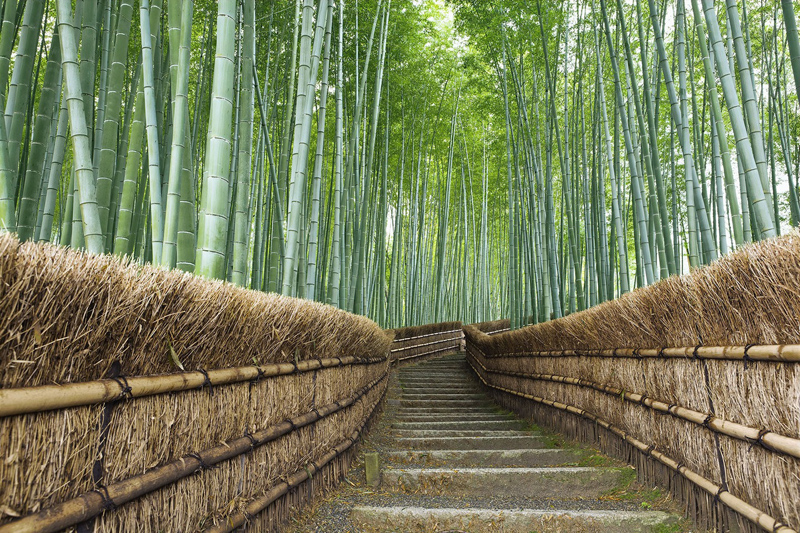 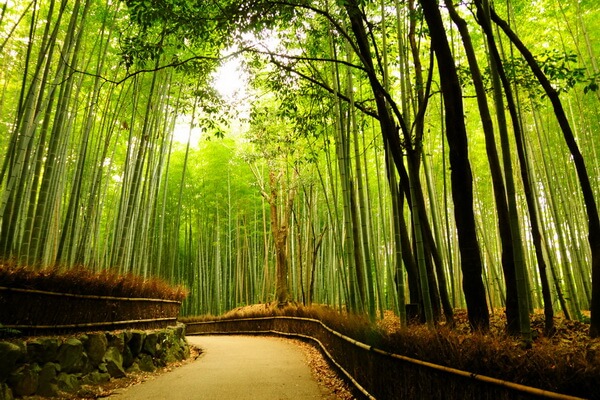 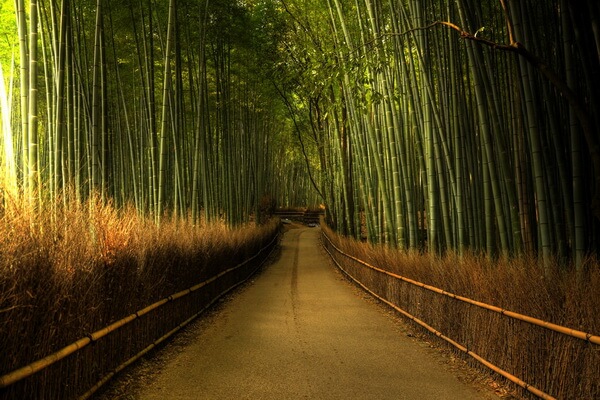 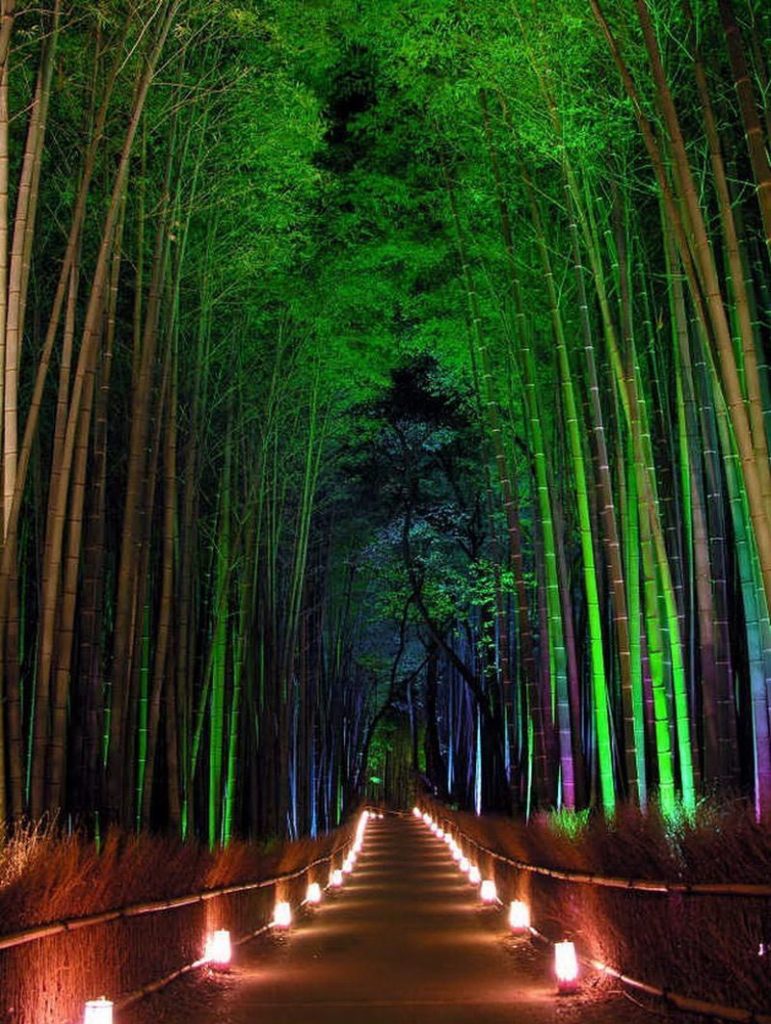 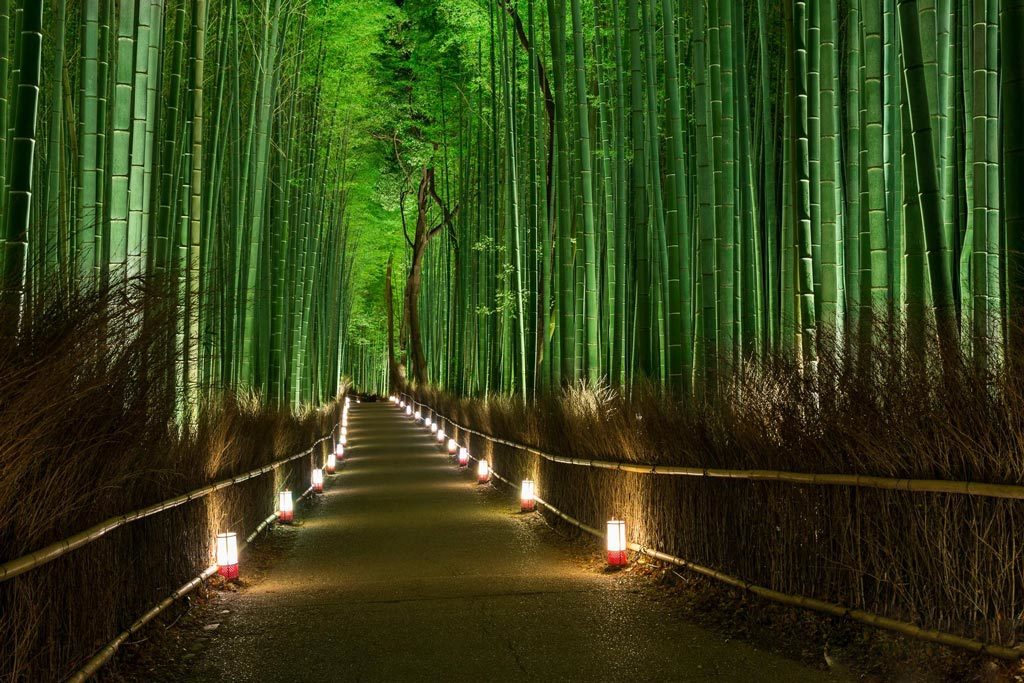 On the territory of this park grows a giant bamboo “Moso”, the tallest representative of the species. It is noteworthy that the thinnest stems of the bamboo, which are only 20-30 cm in diameter, can reach a height of about 40 meters. Bamboo grows with excessively high speed, literally in a month the plant can reach a height of 20 meters.

Another peculiarity of these bamboo trees is their uniform evenness and slenderness. They are like twin brothers. You can admire the Sagano bamboo grove at any time of the year, it is an evergreen plant. 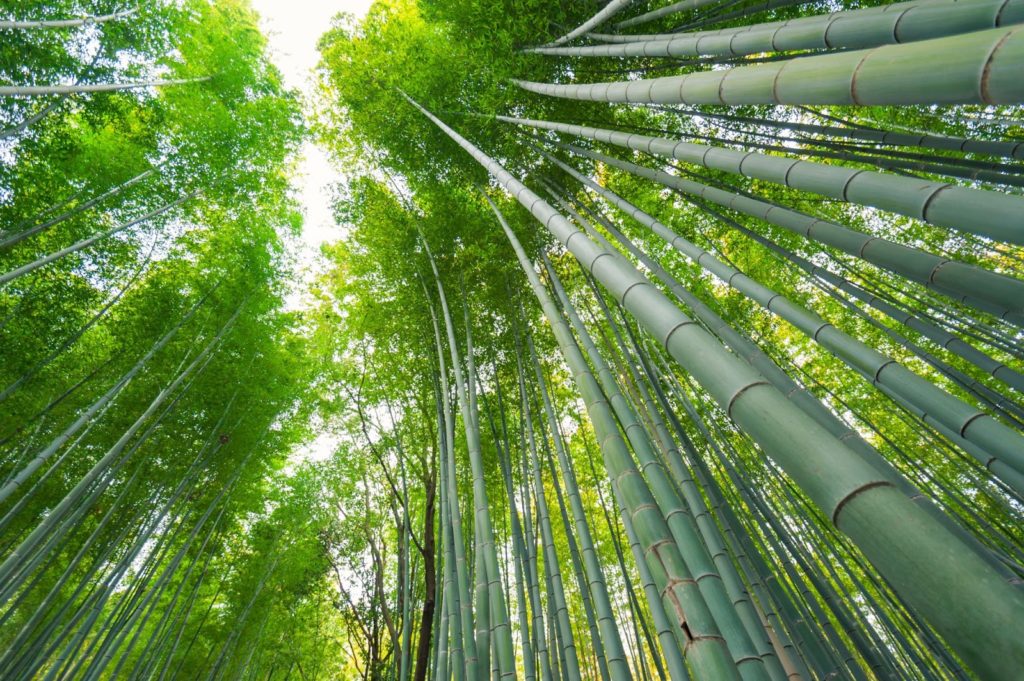 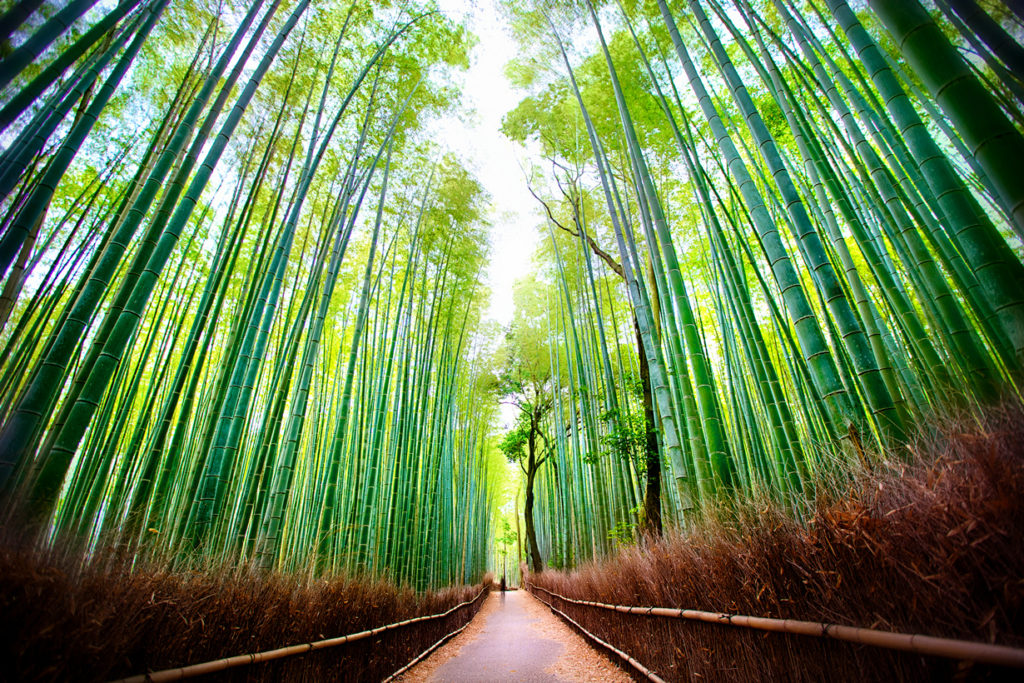 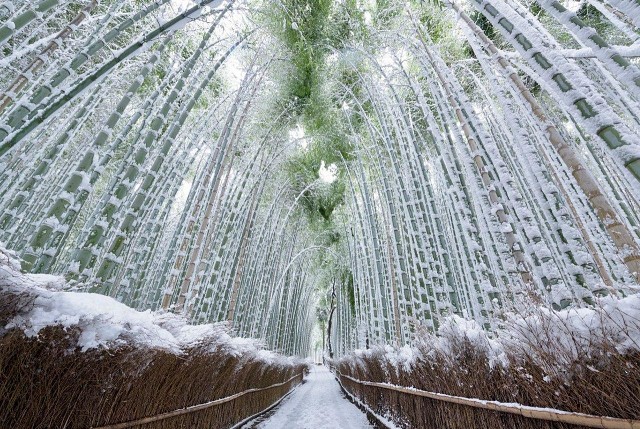 Sagano Bamboo Forest is a pride and one of the most beautiful sights in Japan. You can walk around the park in 15 minutes, but you want to walk there for hours.

In Japan, there are many attractions, and the underwater pyramids, and thermal springs, but they absolutely can not compare to the quiet quiet bamboo grove.

Tourists come here to take a break from the hustle and bustle, gain Japanese wisdom, and listen to the wonderful, mesmerizing sounds of nature.

Sagano Bamboo Forest is an extraordinary grove of bamboos with over a hundred thousand different species of the plant. It is one of the most beautiful sights in Japan. The grove is located in the city of Kyoto in the local national park of Arashiyama. And next to it is Tenryuji Temple.

The Sagano Forest is popular not only for its atmosphere and wonderful scenery, but also for its unusual sounds. They are produced by the contact of the wind with the thin stems. Vacationers enjoy listening to these melodies, and they specifically come to the grove just for them. The bamboo sounds are calming and soothing, creating a sense of harmony with the surrounding reality. The government of the country is very protective of its landmarks. That is why the Bamboo Grove is also on the list of protected areas.

The area of the grove is 16 square kilometers. The grove is not a dense impenetrable array, it is punctuated by a system of paths and trails. The most abundant bamboo in the forest is the Moso bamboo. It is considered the most widespread, growing everywhere throughout the country. It was brought from China. The main feature is the rapid growth. The tree in a month grows to twenty meters.

At the end of the 16th century, the famous artist Muso Soseki decided to create a grove that would surprise others. After some preparations, the idea was brought to life. In addition to the bamboo thickets, there is a Sozhen pond and several temple buildings surrounded by a picturesque alley.

All states of the East and partly of Asia consider bamboo a unique plant with special properties. In China it became a symbol of long life, in India – infinite friendship. In Japan, the plant is attributed magical properties. People believe that it can protect them from the dark forces, so bamboo is often planted around monasteries and sacred places as additional protection. Here to this wonderful plant found a more practical value: they make boxes and even kitchen utensils.

At the end of the 19th century, the famous inventor Thomas Edison came to Japan in search of strong bamboo branches to use for his invention – a light bulb. He was offered two options to choose from for his search, one of which was the Sagano forest. But for some reason Edison preferred the other bamboo forest.

Hikers are attracted to the fact that the bamboo is green year-round. One can wander all day and inhale the smell of the plants. A little slower step, and the enchanting sounds carry you into a world of silence, tranquility and complete unity with nature. If you want to spend your vacation in a tranquil environment, the Sagano Forest is just what you need. Excursions take very little time, but the impressions will last a long time. Also Sagano will interest cycling enthusiasts, as there are many suitable paths for riding. And as in any park, in the forest there are several shops where you can buy handmade items. Every year more and more tourists want to get into the bamboo grove. Once there, your heart will be begging to go back. Unfortunately, only tourists like bamboo. Flora and fauna has bypassed this place. There are practically no birds or animals here. You can get to your destination by train, bus and streetcar.