Geographically, St. Barthélemy is located at the junction of the Caribbean Bay and the Atlantic, in the north of the Navigable Antilles.

St. Barts is an island of volcanic origin, with hilly terrain, surrounded by coral reefs. The island’s shores are rocky, interrupted by strips of two dozen beaches of fine white sand.

St. Barth’s climate is tropical, with the same temperature all year round and 300 days of sunshine, although July, August and September are times of strong winds.

The island was discovered in 1493 by Christopher Columbus himself and, in honor of his brother Bartolomeo, gave the island the name of his saint: Saint-Barthelemy, the same saint’s name in French pronunciation.

Because of its small size, poor soil, and lack of water, the island proved unsuitable for plantations and remained uninhabited for a long time.

In 1648 the island became a French colony, but attacks by Carib Indians forced the settlers to abandon it. In 1651, France sold the island to the Knights of the Order of Malta, but they took it back. The temporarily “derelict” island became a base for French pirates who plundered Spanish galleons.

In 1784, France found a new buyer – the Swedes, who named the only settlement Gustavia – in honor of their King Gustav III. At the same time there was a free neutral port, which flourished during the colonial wars of the XVIII century.

The wars ended, the port fell into disrepair, destroyed by hurricanes and fires, and the Swedes gladly returned it to the French for a small sum.

The proximity to the French-Dutch island of St. Maarten, with its closest international airport, is essential to the island as a tourist destination.

READ
The 100 most unusual and private museums around the world

St. Maarten is a popular vacation spot for millionaires from all over the world, especially during the winter season, when they come here to celebrate Christmas on a hot sandy beach.

The “millionaire” boom in St. Barts began in 1957 when multimillionaire David Rockefeller bought two parcels of land on the island. The banker was followed by Edmond de Rothschild, the Ford family and other rich people.

The reason not only in the beautiful climate, but also in the fact that there were no plantations and black slaves, and virtually all the islanders are the descendants of the French Huguenots, Normans and Bretons, who in the XVII century exterminated the indigenous population – the Arawak Indians, and to this day retained a special French accent.

The main occupation of the locals, who call themselves babat, is catering to wealthy tourists, mostly from the U.S. They bring 70,000 people a year, and as many as 130,000 on yachts.

Providing for tourists on St. Barth is difficult, because all the food has to be delivered. The biggest problem for the islanders is the complete absence of rivers and streams on St. Barts. Fresh water is obtained through desalination plants, collecting rainwater or being delivered by tankers.

St. Barts, though a tiny piece of France across the Atlantic Ocean, is also part of the European Union. The euro circulates here, all locals have French citizenship, elect their own “government” – the Territorial Council – and its president, as well as one deputy each to the French legislative bodies – the Senate of the Republic and the National Assembly.

The only city on the island – the capital of Gustavia, it is located in the most convenient bay of the island. The houses, which give the impression of old, in fact, reconstructed buildings still “Swedish” era, but the old Fort Gustav III – the very real, built by the same Swedes.

READ
100 most beautiful and longest bridges in the world

The big events in St. Barts are the annual classical music festival in January, when the most sophisticated crowd arrives here, and the big gathering of the world’s most expensive yachts in March. 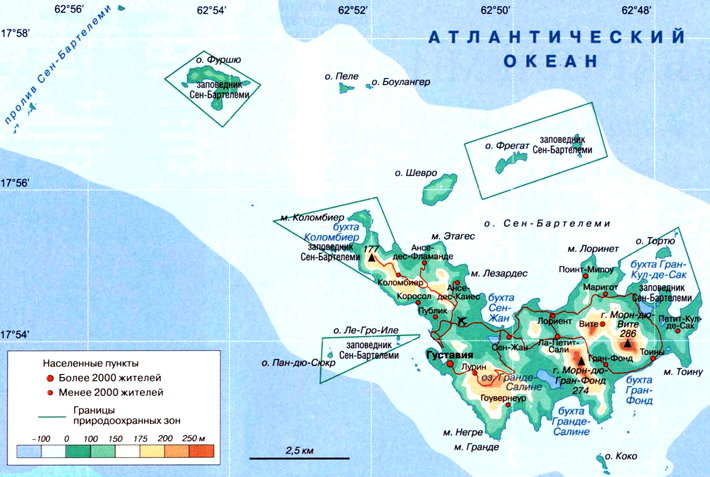 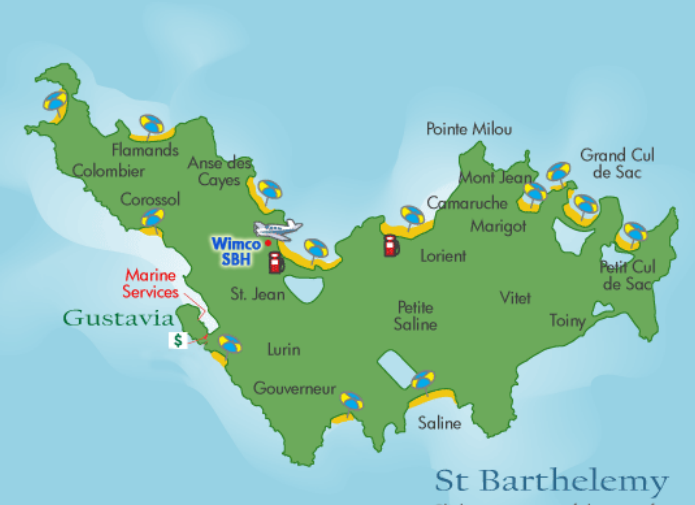 Saint-Barthélemy (French version – Saint-Barthélemy) is a small island in the northern part of the Le Petit Antilles archipelago, located about two hundred kilometers northwest of the Guadeloupe Islands and twenty – south of Saint-Martin. The island was named by Christopher Columbus after his brother Bartolomeo. In some Russian-language sources, the name “Saint-Barthelmy” is often encountered. In addition, there are common colloquial abbreviations, such as Saint-Barth and Saint-Barths, which even appear on contemporary English- and French-language maps.

The area of Saint-Barthélemy Island is approximately 21 square kilometers.

Saint-Barthélemy and the smaller adjacent islets and cliffs are now home to the French Overseas Community of the same name (Collectivité territoriale de Saint-Barthélemy).

READ
St. Lucia is island state on the island of St. Lucia 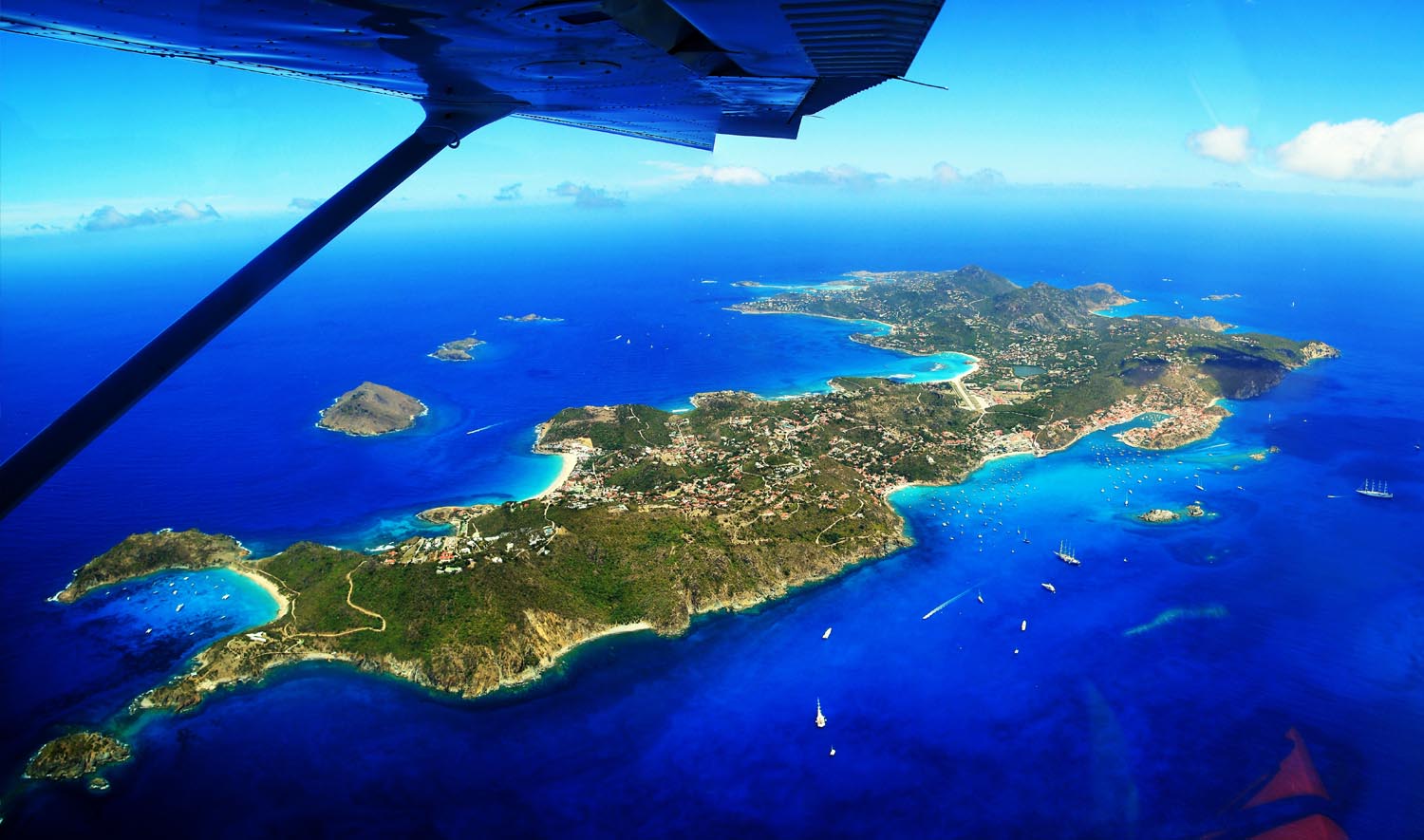 Saint-Barthélemy Island pictured from an airplane.

Saint-Barthélemy Island was discovered by the expedition of Christopher Columbus in 1493. The island was named after Columbus’ brother Bartolomeo.

At the time of discovery the island was practically deserted, just at this time the Arawaks had already left it, and the Caribs had not yet appeared here.

In 1648 the first French colonists arrived on the island.

In 1653, the island of St. Barthélemy was bought by the Order of Malta from the French authorities, but in 1665 again came under French rule.

In 1763 the island began the second wave of colonization of the French settlers from Brittany and Normandy. A little later there appeared French pirates, who began to actively use the island as their base.

In 1801 Saint Barthélemy was captured by the British, who almost immediately, in 1802, returned it to the Swedes.

In 1847, Sweden abolished slavery on St. Barthélemy, after which most of the former black slaves moved to Guadeloupe and St. Maarten.

Under the Treaty of Paris of August 10, 1877, St. Barthélemy was sold to the French, who incorporated it into their colony of Guadeloupe.

Both World Wars I and II passed over the island, and in 1946, France reorganized its former colonies and designated St. Barthélemy a district within the overseas department (département d’outre-mer) of Guadeloupe.

In 2003, the people of Saint-Barthelemy voted in a referendum to secede from Guadeloupe, and since 2007, the island, like the French part of Saint-Martin, has enjoyed the status of the French Overseas Community (collectivité d’outre-mer), which it still enjoys to this day.

The shores of the island of Saint Barthélemy.

Origin and geography of the island.

St. Barthélemy Island, by its origin, is volcanic. Its formation, according to scientists, may have occurred about 11-12 million years ago during a period of seismic and volcanic activity in the region.

St. Barthélemy Island is separated by a fairly wide strait of the same name from St. Maarten Island, which lies to the northwest. Other large surrounding islands within the Naval Islands (Saba, St. Eustatius, Antigua, Barbuda and others) lie at a sufficient distance from St. Barthélemy and are separated from it by considerable water areas of the Caribbean Sea. The island is also adjoined by several small islets and rocks, among which the islands of Chevrolet, Toque-Verse, Fourchaux, Tortue (Tortu), Frigate, Fourmi, Coco and others stand out. The shores of Saint Barthélemy are rocky, but there are also gentle areas with sandy beaches. The island’s topography is predominantly hilly, especially in the central part, where the highest point, Mount Guchaud, is located, 286 meters above sea level. St. Barthélemy is surrounded by a coral reef, which has several interruptions and is not massive. The island has several saltwater lakes isolated from the sea, which look more like inner lagoons of atolls than lakes. There are no natural sources of fresh water on the island at all. 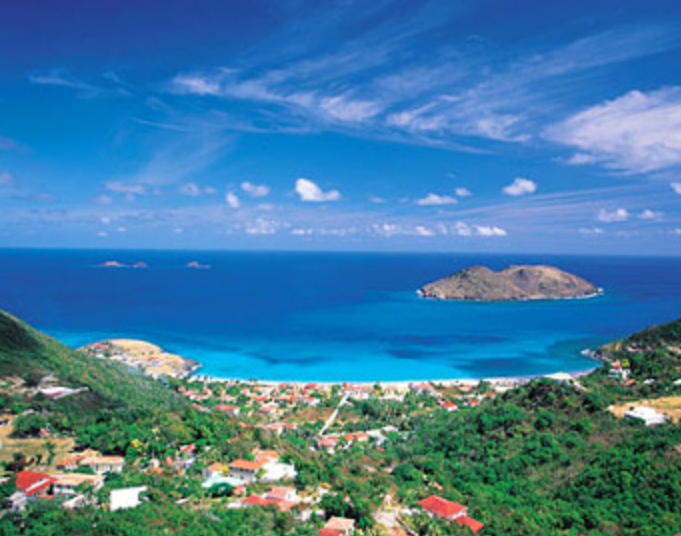 A view of Chevreau Island from the north coast of Saint Barthélemy Island.

The climate on the island of Saint Barthélemy is classified as a tropical, trade wind type. The air temperature does not vary much depending on the season, it generally stays between 25-28 ° C. In turn, the water temperature off the coast of the island is also constant throughout the year and is about 24-26 °C. The average annual rainfall, which falls on the island mainly in the form of tropical heavy rains, is about 1500-1800 millimeters. 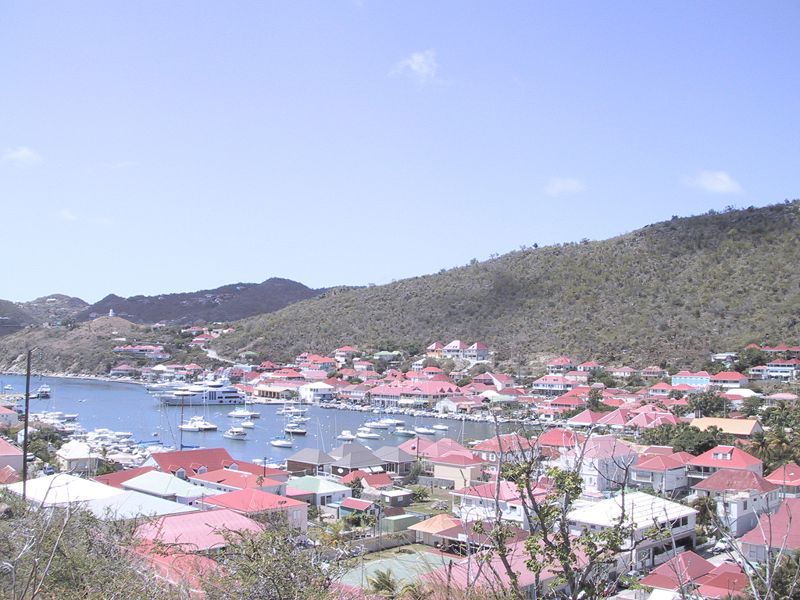 The bay and the city of Gustavia.

The population of Saint Barthélemy, according to 2009 estimates, exceeds 9,000. Ethno-racially, Europeans predominate, with a small number of mulattoes, negroes and Guadeloupean mestizos (of French-Indian descent) living on the island. French is the official language on the island, but both Creole (based on French) and English are bypassed. St. Barthélemy’s main occupation is tourism and offshore activities.

The administrative center and the largest settlement on the island of St. Barthélemy is the town of Gustavia, populated by about two and a half thousand people.

The unit of currency currently in circulation on the island of St. Barthélemy is the euro (EUR, code 978), consisting of 100 eurocents. 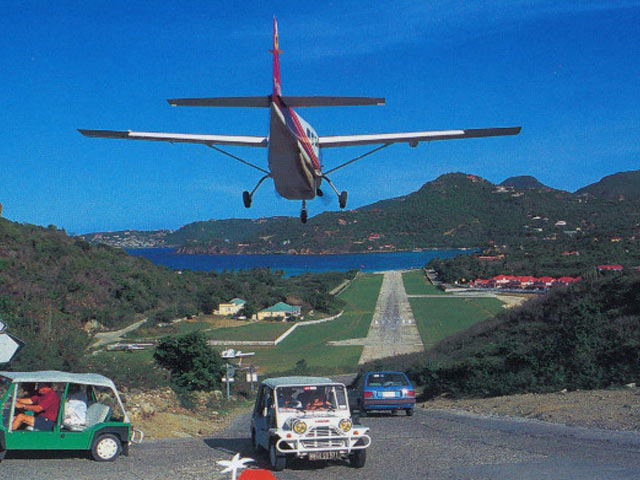 Both the flora and fauna of St. Barthélemy are quite poor, which is quite typical for the islands of the Lesser Antilles.

Vegetation due to the lack of natural sources of fresh water on the island is represented mainly by shrubs and herbaceous plants. Of woody plants – there are quite a lot of palms of different species.

The animal life is represented mainly by seabirds, which are always abundant on uninhabited islands near the coast of St. Barthélemy.

The coastal waters of St. Barthélemy are rich in fish, but there are few commercial species, in addition to fish, there are many sharks, molluscs, crustaceans and sea green turtles near the island. 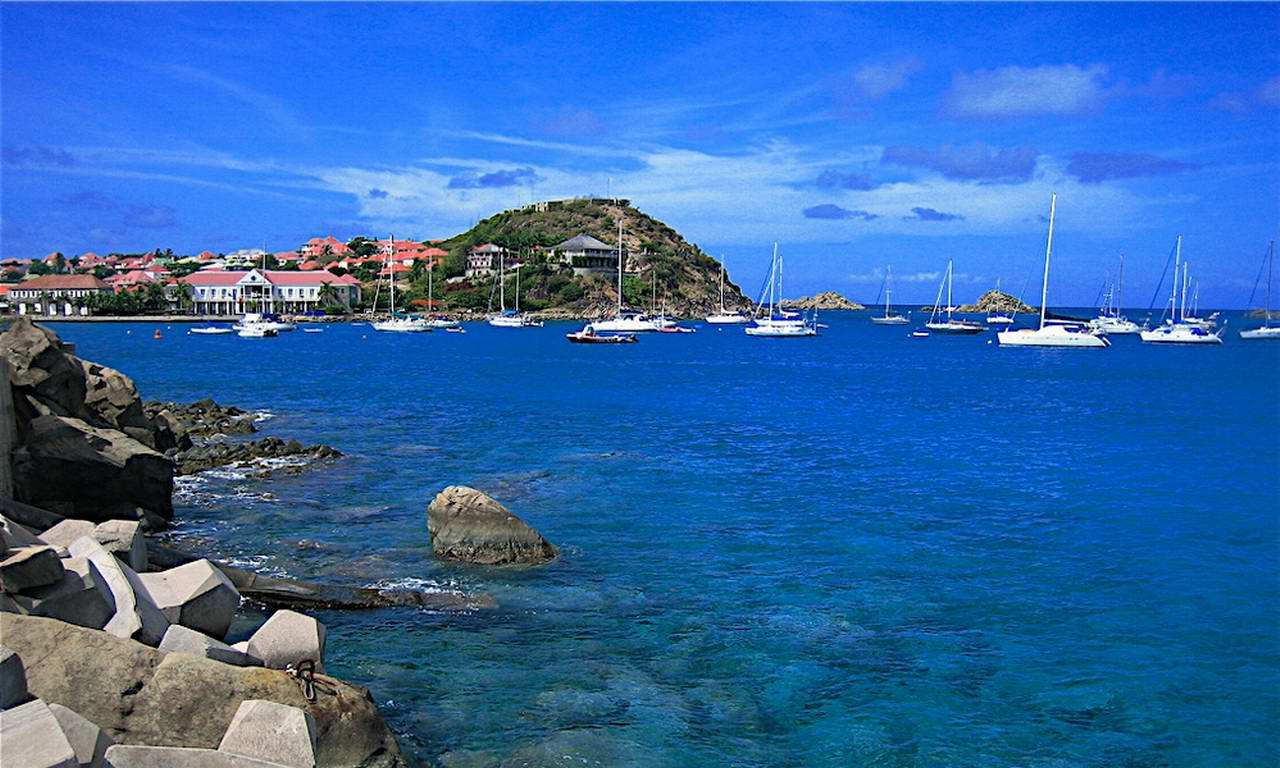 Tourism on the island of St. Barthélemy is a priority sector of the national economy . Natural conditions, favorable climate and infrastructure made the island an elite vacation spot for tourists from North America and Europe. Many millionaires and showbiz stars consider it prestigious to buy real estate on the island. The island has villas of Sylvester Stallone, Rudolf Nureyev, Cindy Crawford, the Rockefellers and other celebrities.

You can get to the island either by sea on a private yacht or a small passenger ship, or by small plane (there is a small airport near Gustavia).

Among the activities offered to tourists in St. Barthélemy, beach holidays, diving, snorkeling, windsurfing and underwater fishing. Tourists are accommodated in fashionable and comfortable hotels along the coast of the island.