The Abbey of Saint-Denis is truly one of the most famous symbols of Medieval France, a monastery, a cathedral and the tomb of French kings.

Saint-Denis Abbey is located in the commune of the same name north of Paris, Ile-de-France region, just 9 kilometers from the capital. In its heyday, the abbey was secluded and far from the hustle and bustle of the capital, but now the metropolis is getting closer to this holy place. The original idea was that the abbey would become a Benedictine monastery, which it was, but it was later used as the tomb of French kings. Today, the Basilica of Saint Denis is open to all who wish to view it from the inside, and millions of tourists visit this holy place every year.

History of the Cathedral of Saint Denis

French historians and contemporary theologians attribute importance to the very site where the abbey was erected. As early as the first century A.D. there was a small Roman settlement on the site of the basilica. According to a legend, it was here that the first Parisian bishop Dionysius came from Montmartre after his execution, carrying his severed head in his hands. Nevertheless, it was not until 475, with the blessing of Blessed Genevieve, that the first basilica was built on the site of the saint’s tomb and later, during the reign of King Dagobert I, a Benedictine monastery was added to the basilica.

After two centuries, St. Denis became one of the main monasteries of the French kingdom. During the reign of the abbot Sougueur in the XII century on the territory of the monastery a large-scale construction was unfolded: a rich monastic infrastructure was erected, the church was built, the first abbey building, made in the Gothic style. As early as the 13th century, King Louis IX of France ordered all the remains of his predecessor monarchs to be moved to the abbey and tombstones to be placed for them. Louis himself was also subsequently buried at Saint-Denis. Since then, all royalty have been buried in the abbey and the monastery itself has been nicknamed the “royal necropolis of France.

Unfortunately, during the Great French Revolution, due to the rejection of everything associated with the monarchy, the abbey was looted and the tombs of the royal families were ruined. The revolutionaries destroyed the tombstones, and the remains of the tombs were thrown into the square and the adjacent moat.

During the Napoleonic wars, by order of the Emperor, Saint-Denis housed a kind of French institute for noble maidens. It was not until 1869 that the abbey was restored by the famous architect Viollet-le-Duc and made into a national treasure.

The restored abbey of Saint-Denis looks almost as it was made by the abbot Sougery back in the 12th century. The main basilica was built in the style of early Gothic, which subsequently determined the development of this architectural style in medieval France and had a great influence on architecture in general. Moreover, the later components of the ensemble are in the style of Romanticism. The tombs themselves are made of solid stone and take up a great deal of space from the altar to the entrance.

The total number of pre-revolutionary burials in the abbey is 119, of which 25 belong to kings of France, 10 to queens, and 84 to princes and princesses.

The entire western façade, with its towers and porches, built again under Sugerius, is noteworthy. Especially interesting are the tombs by the famous Germain Pilon. In addition, the tombs of Louis X, Louis XII and his wife Anne of Brittany, Francis I and, perhaps the most beautiful monument, the mosaic tomb of Fredegunda seem to be luxurious and unusual. An interesting fact is that in addition to royalty, many other notables are buried in the abbey, including numerous counts, dukes and barons who radically influenced the destiny of France. The basilica is today a functioning Catholic church, owned and led by the Diocese of Saint-Denis.

Today, the Abbey of Saint-Denis is open to all who wish to visit this holy, history-rich place, and there are millions of those wishing to do so each year. The town of Saint-Denis itself has a well-developed urban infrastructure, which is why tourists do not feel uncomfortable during a visit to the abbey. It is worth noting that until now the walls of the basilica are replenished with new remains of monarchs.

In 2004, the solemn burial of the heart of the infant son of the last king and queen of France Louis, who never ascended the throne, was held in the abbey. That’s why everyone who wants to see Paris must spend a day of their trip to look at this ancient monument of proud and unbroken France! 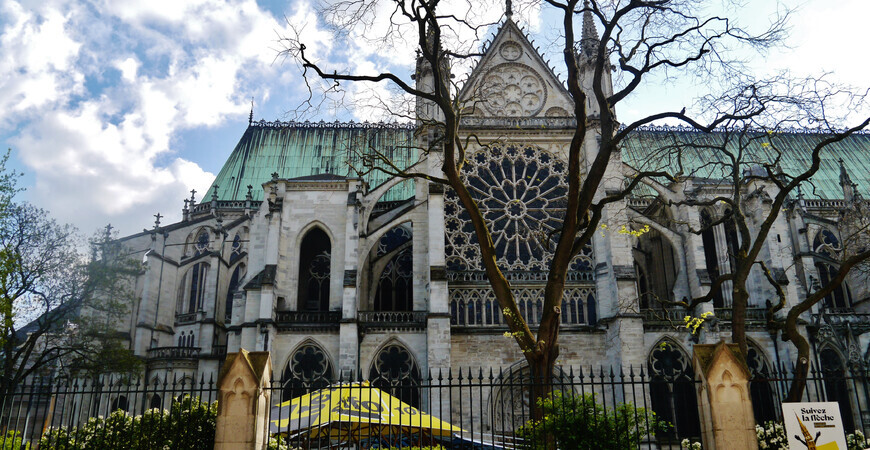 Saint-Denis Abbey is one of the main national historical and cultural monuments of France, which is located in the industrial area of the northern suburbs of Paris. Saint-Denis Basilica is the world’s first Catholic cathedral built in the Gothic style. It is a unique museum of tombstones from the Middle Ages and Renaissance.

For centuries, the Abbey of Saint-Denis has played an important role in the spiritual and public life of France. For centuries, important religious services have been held there to bless military campaigns. Children of royalty and nobility studied there, and monarchs were crowned and buried. Today, St Denis Basilica is visited by tourists from all over the world, wanting to touch the mysterious and majestic history of France.

What to see in the Abbey of Saint Denis

The Abbey of Saint-Denis in its modern form was designed by the talented architect Eugène Viollet, who from 1846 to 1869 restored the temple and tombs that were destroyed during the Revolution. The modern basilica attracts visitors with its splendid twelfth-century western façade, on which a commemorative plaque dedicated to Joan of Arc is affixed.

Saint Denis Basilica is famous for its stained glass windows, made in the Gothic style. They depict historical and biblical scenes. Of particular interest is the stained-glass rose, a circular window above the main entrance to the temple. All the stained-glass windows are united by a common subject. One of them depicts the history of the First Crusade, and the other depicts the visit of Charlemagne to the Holy Land.

The three central chapels, preserved to this day, are devoted to the theme of Christianity, the Old Testament and the New Testament. The stained glass windows of the basilica reveal the theme of the Tree of Jesse and the childhood of Jesus Christ. The side chapels presumably had earlier hagiographic and historical cycles. Even without going into the details of the abbey’s stained-glass windows, the basilica’s decorations are fascinating because of their grandeur, the bright light pouring in from the windows, and the intricacy of the themes.

Saint Denis Basilica was the final resting place for 43 kings, 32 queens and 10 servants of the French monarchy. It has the largest collection of funerary sculptures from the 12th to 16th centuries. The abbey houses more than 70 reclining statues and monumental Renaissance tombs. The most prominent of these is the tomb of Henry II and Catherine de Medici, decorated with 12 columns. In the corners of the tomb rise four statues made of bronze. They are symbols of the virtues of the Christian faith.

On the tombstone are statues of the deceased spouses, and next to it are sculptures depicting living monarchs kneeling in prayer. The tomb of the royal couple, Anne of Brittany and Louis XII, installed in the basilica in the 16th century, is made in the same style. Of particular interest is the last burial of a French monarch, which took place in 2004. It is the tombstone of Louis XVII, where a vessel with his heart is placed. In the center of the abbey rises a statue of St. Dionysius. You can also see there the sarcophagi with figures of saints.

Organ music concerts are held within the walls of the abbey. Stunning acoustics and beautiful compositions leave no one indifferent. For the guests of the abbey various thematic excursions are organized. They are conducted in more than ten languages, including Russian. Every first and third Friday of the month you can attend a tour led by a lecturer of the French National Monuments Center and get acquainted with the history of the basilica and sculptures.

Audioguides in various European languages are also available. For more information on available tours, visit the official website of the Abbey of Saint-Denis. There are restrooms within the basilica as well as a seating area. Visually impaired people are allowed to enter with guide dogs.

According to legend, in the area where the Basilica of Saint Denis is located, Saint Dionysius died in the distant 3rd century AD. He was beheaded on top of Montmartre. The French believe that he walked as much as 6 km, holding his own head in his hands, and then died near a nearby village. The village was later named Saint-Denis after the saint. On the site of his grave in the 5th century a chapel was built. In 625 on the royal order in this place began to build an abbey and a monastery. Over time, the chapel was replaced by a monastery church.

In the VIII century, the abbey was like a fortification. A water moat was dug around it. Access to the abbey through it was possible through a lifting bridge. Despite such fortifications, the basilica was seriously damaged during an attack by Siegebert’s troops. It was then reconstructed, and the abbey housed a church school, libraries, and almshouses. In the XII century Saint-Denis was rebuilt, giving the abbey a Gothic style. The works were carried out for 20 years. Then the remains of the French monarchs were transferred there. During the French Revolution, the abbey was looted. Subsequently, the historical and cultural monument of France was restored.

An individual ticket to visit the Abbey of Saint-Denis costs 9.5 euros. There are discounts for groups of 20 people or more. A group ticket costs 7,5 euros. Some group tours must be booked in advance. Admission is free for privileged categories. For ordering an audioguide you will need to pay extra 3 euros. There are also special offers for SNCF Intercité ticket holders and Paris Museum cards.

The Basilique de Saint-Denis Metro station is 197m north of Saint-Denis Abbey. Line 13 leads to it. The Saint-Denis Porte de Paris station, also on line #13, is southwest of the abbey, about 670 meters away.

There are several bus stops near Saint-Denis Abbey; you can get there from all over the city. The Legion d’Honneur stop is 143m to the southwest. Routes 153 and 253 go there. Just below it is the Médiathèque stop, where bus number 239 arrives. On the southwest side of the basilica, about 300 meters away, is the bus station “Gabriel Peri – Franklin”. To it go bus routes number 153, 239, 253.

It’s easy to get to Saint-Denis Abbey from any part of Paris by cab. Popular services in the city are Acsel ltd with Russian-speaking drivers, Taxis, Taxi G, Alpha Taxis and 01 Taxi.