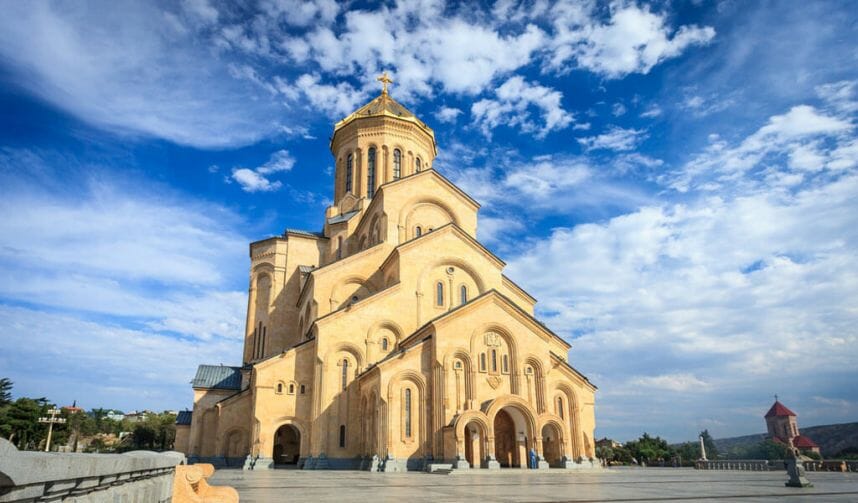 The Saint Trinity Cathedral (Tsminda Sameba) is the main temple of the Georgian Orthodox Church and the highest church in Georgia.

The idea of the cathedral was born in 1989 and was timed to celebrate the 1500th anniversary of independence of the Georgian Church and the 2000th anniversary of Christianity. The Tbilisi Patriarchate announced a competition for the best design of the Holy Trinity Cathedral, which was won by the architect Archil Mindiashvili. 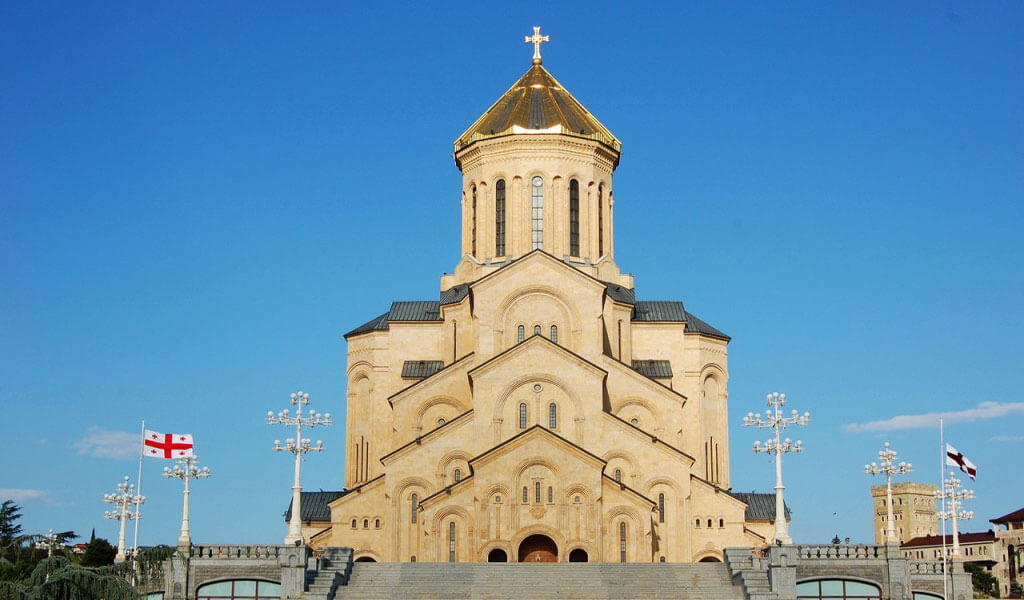 Because of the collapse of the Soviet Union and the civil war in Georgia, the construction of the temple had to be postponed for a long time. And in 1995, finally, began construction of the cathedral on the hill of St. Elijah. Honoring the traditions, sacred objects were put in the foundation: stones from Mount Zion and the Jordan River, earth from Jerusalem, and the priests put gold coins in the foundation of the temple.

The first service in the cathedral was held on December 25, 2002, when the temple was still under construction. The construction was completed in 2004.

What is interesting about the Temple of Tsminda Sameba 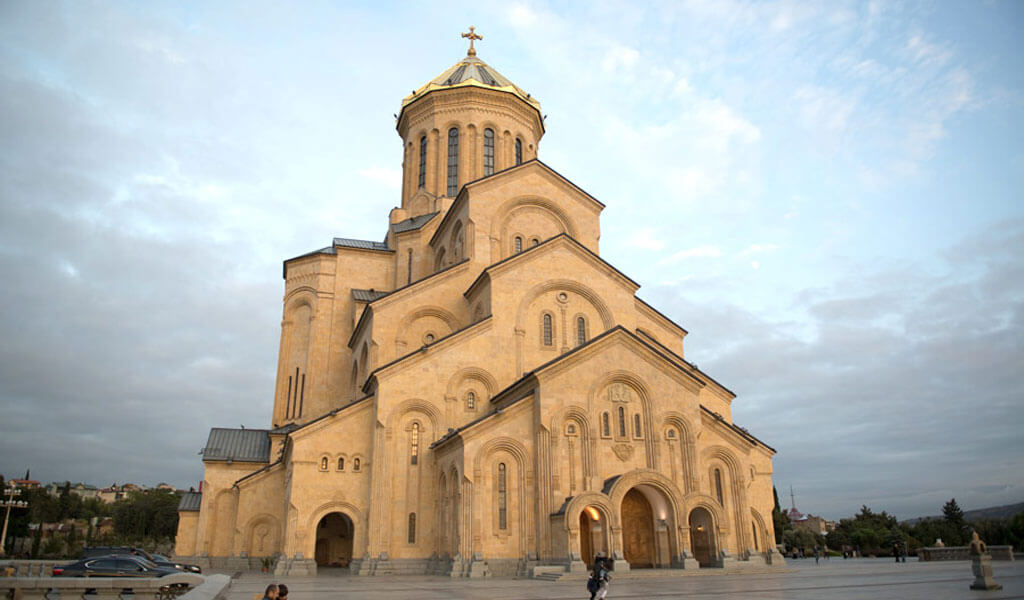 The scale of the Church of Tsminda Sameba is truly amazing. Its height is over 100 meters, and the height of just one cross is 7.5 meters. The area of the cathedral is over 5000 square meters. Plus the temple is located on a hill, so it is visible from anywhere in Tbilisi.

On the territory of the temple there is a whole complex of buildings – the bell tower, 9 chapels (5 of which are underground), the residence of the Patriarch, a religious academy, a hotel, park and cafe “Lagidze Waters”.

Inside the temple resembles a chic museum. The walls are decorated with frescoes and paintings by various artists, and the floors are marble and decorated with mosaics.

In the temple there are several very valuable icons, one of which is “Hope of Georgia”. The icon is made of gold and precious stones in the ancient technique of Minankari art. It took 30 kg of gold to produce the icon, and its cost price is $27 million. The icon depicts 432 saints of Georgia. 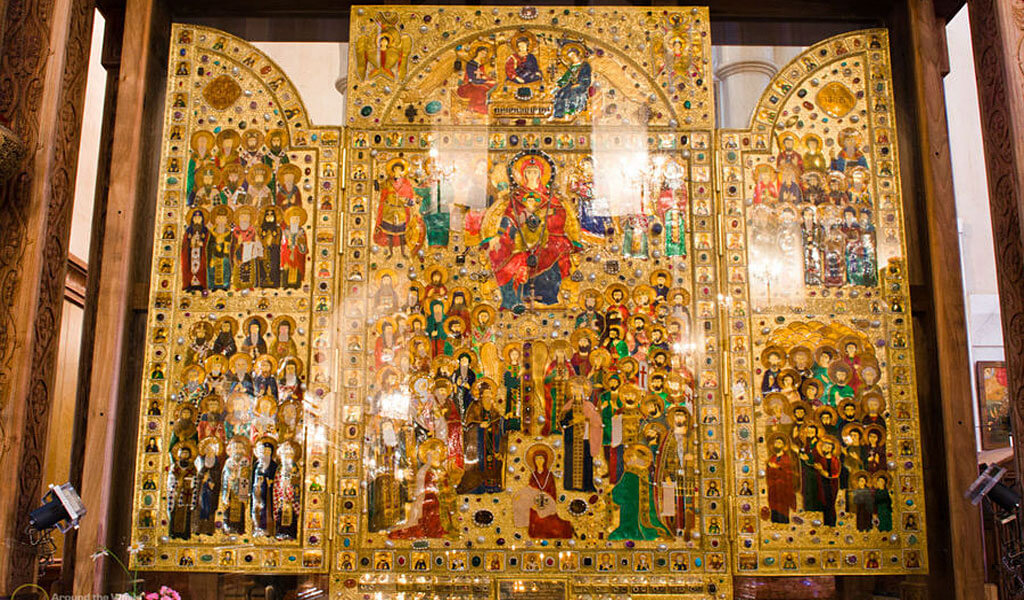 In front of the altar in a gilded sarcophagus is the cross, which St. Nino placed in honor of the baptism of Georgia on the mountain above Mtskheta. Now there is a temple Jvari.

How to reach the cathedral

It is not difficult to find the Tsminda Sameba Cathedral in Tbilisi – it is visible from anywhere in the city.

If you take the subway, you need to get off at Avlabari station and walk about 100 meters.

The church can be reached by bus 91 or 122; the bus stop is called Sameba.

Would you like to come here? Viva-Georgia team will organize a tour or a tour for you, make the best route and provide any other help for your trip. 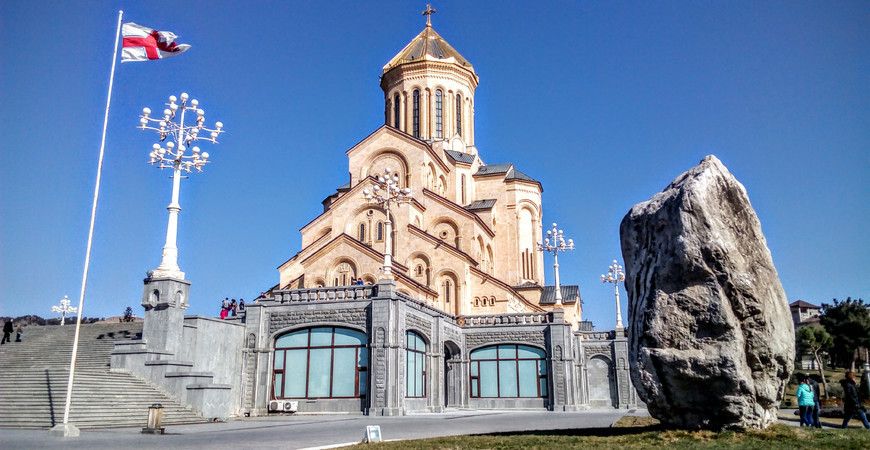 Tsminda Sameba – The Cathedral of the Holy Trinity is located in the ancient Avlabari district of Tbilisi. It is considered the main Orthodox church in Georgia and one of the most interesting sights on the left bank of the river Kura. It stands on a hill of St. Elijah and is visible from many points of the capital. At nightfall the church is illuminated by floodlights, which gives it a special solemnity.

The Cathedral of the Holy Trinity has a relatively short history. It was originally scheduled to open on major church holidays, but due to political events and secession from the Soviet Union, construction was postponed indefinitely. In the end, the project of the future cathedral was approved by the patriarch. The author was Archil Mindiashvili.

In fall 1995 the first stage of erection began. Most of the money came from the believers. The history of construction of Tsminda Sameba cathedral is connected to the scandal because of the destruction of the ancient Armenian cemetery Khojivank where the excavation was going on. In December 2002, the first service was held in the church without waiting for the construction to be finished. Two years later it was fully opened for visitors. The church of Tsminda Sameba was consecrated nine years after construction had started. Here from the temple Sioni moved the pulpit of the Georgian Church.

The architectural execution of the ensemble is in the classical style of the Georgian Orthodox Church. The Cathedral of Tsminda Sameba is the third highest in the world among the Orthodox churches. Its above-ground part is higher than a hundred meters, and the underground level reaches forty meters. The dome cross is 7.5 meters high.

During the first stages of construction, the earth brought from Jerusalem and stones from the Jordan River were put into the foundation of the temple. Inside the cathedral are the most important church relics. One of them is the cross that previously rose above the ancient Georgian capital Mtskheta on the site of the functioning Dzhvari monastery. Now it is kept in a golden sarcophagus.

The icons in the cathedral have cultural and historical value. One of the main is “Hope of Georgia,” which depicts the faces of 432 saints of this country. More than $20 million was spent on its production. It took thirty kilograms of gold alone. Also large precious stones were used to decorate the icon.

There are two entrances to the lower level of the cathedral. The first is directly in the upper part of the building, the second is from the street. Stone sarcophagi for the ashes of the kings Vakhtang VI and Teimuraz II, who are now buried in Russia, will be of interest to believers here.

On the territory of the temple there is a small bell tower and nine small chapels. They are separate structures and some of them are underground. There is also a beautiful park with alleys and lawns. There is a beautiful view of the old city of Tbilisi. Here is the official residence of Catholicos Patriarch Ilia II and the spiritual seminary. There is a hotel and a cafe selling authentic “Waters of Lagidze” for visitors.

Due to its elevated location, the Cathedral of the Holy Trinity can be seen from the two banks of the Kura River. The Avlabari district, which is very popular among tourists, can serve as a reference point. There are bus stops and a metro station near the complex. It is also possible to reach it by car.

The place is one of the main attractions of Tbilisi and attracts a large number of tourists. Therefore, it is better to plan your visit either from early morning or after 5:00 pm, when there are not so many tour groups.

The nearest subway station “Avlabari” is a 15 minute walk from Tsminda Sameba Cathedral. It belongs to the red metro line. After climbing to the surface, you need to move in a northern direction through Lado Meskhishvili Street. Entrance through the park.

Right in front of the temple complex is a bus stop of the routes 91 and 122. It has the same name – “Sameba Cathedral”. From public transport walk no more than five minutes.

You can rent a car at the international airport or in the center of Tbilisi. This does not require a special international license. The road from the airport “Shota Rustaveli” will take from 30 minutes and more depending on the traffic.

It is comfortable and relatively inexpensive to travel around Tbilisi by cab. You can easily use Yandex.Taxi Mobile App.