San Alfonso Del Mar is the longest pool on the planet. Chile

The small town of Algarrobo in western Chile and consequently on the eastern coast of the Pacific Ocean has become world famous for its amazing and huge structure. It is San Alfonso Del Mar, one of the largest basins on the planet. First in length and second in area in the world. 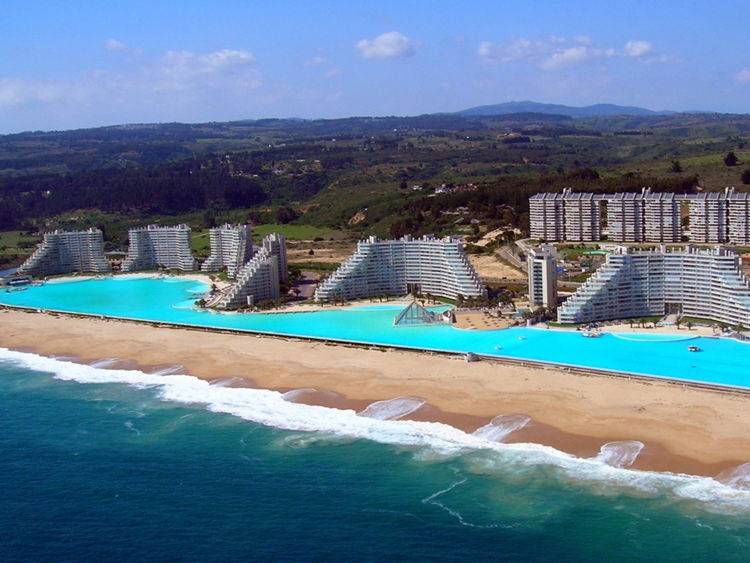 Actually it is impossible to call this gigantic structure a swimming pool. It is more like a lake or a small sea. It is perfectly visible from space. Its dimensions are quite large. The maximum length reaches 1013 meters. Width is more modest – up to 165 meters. The water surface area is as much as 8 hectares. The depth… Here it is a little more interesting. Many sources indicate the maximum depth of 34.5 and 35 and 37 meters. We somehow doubted these figures, and decided to ponder. So, the first – why do the creators of such depths? It is not clear. Second, given that the capacity of the pool of 250 million (.) liters and knowing its area, we come to the conclusion that the depth is still about 3 – 3.5 meters. 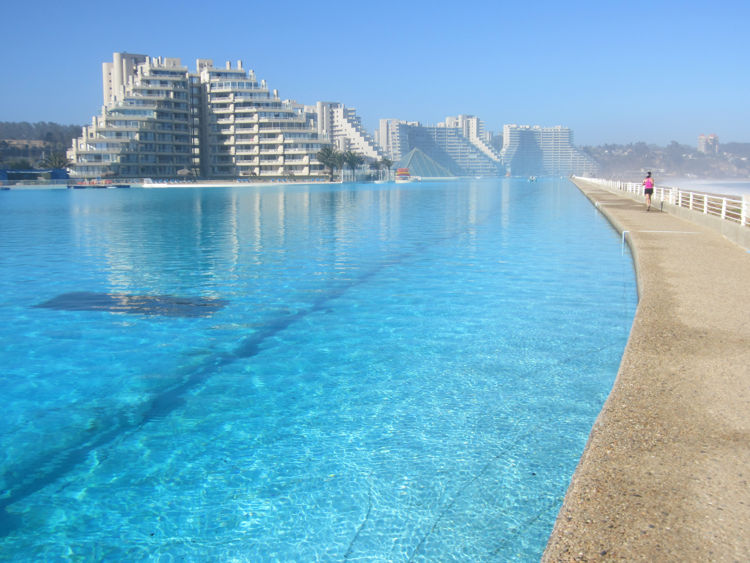 Well, San Alfonso Del Mar is of course huge and very attractive. But here another question arises. Why build such a colossal pool right on the shore of the Pacific coast, and in a subtropical climate zone?

The answer lies in the following: strangely enough, but in these places the temperature of the ocean water does not rise above +17 ° C (affected by the cold Peruvian current). Plus there are sharks on the coast. Not the best place for a resort. But there was one desperate man and decided to create one of the most amazing places in Chile. That’s Fernando Fishman – entrepreneur, founder and chairman of Crystal Lagoons. As you understood, he’s a businessman, but he’s also a biochemist. So in the San Alfonso Del Mar project he tried to implement both the business idea and the scientific projects. 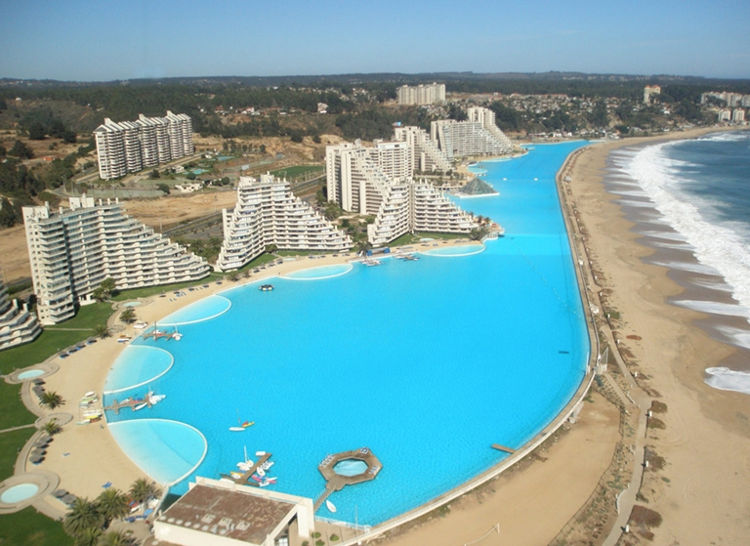 Now we know for sure that the project was a success. And what we (or rather, they, the designers and builders) got.

In terms of size, everything is already clear. But apart from the size, the pool amazes with amazingly pure sea water. Yes, exactly sea water. The water comes into the pool directly from the ocean, through a unique treatment system. This, by the way, was developed by Fernando Fishman himself. He even patented it. And this system cost a lot of money, about 3.5 million dollars. But it was well worth the investment. After all, the filtering system contains no harmful chemical components, and therefore does no harm to the environment. It is beautiful, environmentally friendly, grandiose and most importantly – the temperature of the water in the pool is maintained at +26 ° C.

The pool was put into operation in December 2006. And the following year the Guinness Book of World Records, without blinking an eye, included this attraction in its list with the notation “the largest pool in the world”. The record lasted for nine years. Until it was beaten by the Egyptian pool at the City Stars Sharm El Sheikh with an area of 12 hectares. Yes, the Egyptian surpassed the Chilean in area, but not in length. 1013 Chilean meters against 745 Egyptian. So we can safely call San Alfonso Del Mar the longest pool in the world.

About 2 billion dollars were spent on the construction of this Chilean wonder. In addition, more than 4 million dollars is spent annually on its maintenance. But this money is more than covered by revenues from the many tourists. Now a whole hotel complex of 9 hotels rises on the coast of the basin. And today it is one of the most attractive attractions of the country. 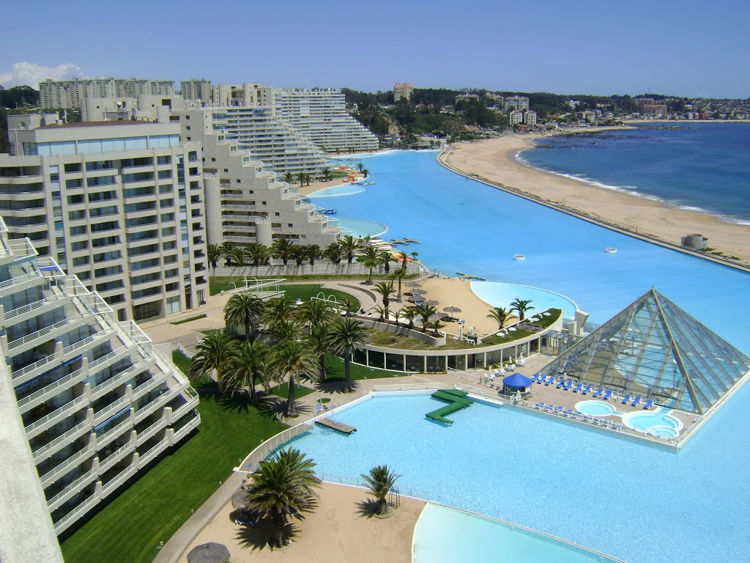 The unpretentiousness of the Pacific Ocean is compensated by the unique properties of the huge pool. Tourists are offered a whole list of activities here. Here you can book a sailing trip on the water surface of the pool. Few people can boast of such a pastime.

In addition, there are water slides, boats and the opportunity to do windsurfing. The pool has its own lifeguard service and several observation towers, as well as shallow water-frogs, where you can safely relax even with small children. And of course the full standard tourist set. The resort area has movie theaters, entertainment center, restaurants and bars, as well as fitness rooms.

100 km west of Santiago, the capital of Chile, is the largest swimming pool (lagoon) in the world, San Alfonso del Mar, in the resort of Algarrobo in Chile. Its size is impressive, its length is 1013 meters, and its area is 77 thousand square meters! Agree, this pool is hard to call a swimming pool, rather a very large lake. The capacity of the pool is 250 million liters and its maximum depth is 35 meters. Though the water is taken from the Pacific Ocean, it is so clear that the bottom can be seen very well, as if it were a couple of meters from the water surface. Do not be surprised if you see a catamaran, a boat or even a yacht floating by, the size of this pool allows you to use such a swimming vehicle, as well as engage in any kind of water sports.

How did the idea for such a project come about. The fact is that previously the city of “San Alfonso del Mar” was not a resort, because the water on the Pacific coast is full of dangers, near the coast swim predatory sharks and there are frequent storms. And also the water temperature is usually not more than – 17 degrees, which does not allow a comfortable stay in it. But a Chilean entrepreneur and biochemist Fernando Fishman (Fernando Fishman) still decided to change the situation and make “San Alfonso del Mar” resort town, creating an unusual pool, which by its capabilities would have replaced the cold and dangerous ocean, but it was very comfortable for people who come to this resort. And it succeeded perfectly, the pool is so huge that being there, it seems that it is just boundless, also due to the fact that it is very close to the ocean. And from the outside it looks like there’s no pool, but it’s the ocean. Fernando also designed and patented a system to purify the water from the ocean into the pool. It is fully computerized and the water is constantly updated, while it is saturated with oxygen and heated to 26 degrees. Therefore, the water in the pool is constantly clean and warm. This system of purification due to its manufacturability is also very economic, because it consumes little electricity, the purification process takes place without using chemicals, which harm the environment, and the water coming out of the pool back into the ocean does not harm living organisms living in it. The construction of the San Alfonso del Mar facility cost the entrepreneur $1.5 billion. And for the maintenance and upkeep of the pool is spent annually about 3-4 million dollars.

On the territory of the lagoon are nine hotels, the cost of rooms that vary depending on the season, for example in the period from November to late March, the cost of a double room starts at $ 300 a day. In the other months the accommodation is a little cheaper. If you rent lodging in other houses, which are not located on the territory of “San Alfonso del Mar”, then to enter the complex and use the pool and services will have to pay. In addition to hotels on the territory there are also restaurants, jacuzzi bars, fitness centers and cinemas.

Due to its impressive size the San Alfonso del Mar Lagoon entered the Guinness Book of World Records in December 2006. Before the construction of the lagoon, the Moroccan giant Orthlieb Pool in Casablanca, which is 6 times smaller than San Alfonso del Mar, was considered the largest.