Santa Cruz is the most populous island in the world

Santa Cruz Island is recognized as the most populous island on the planet. And it is a rather small and very unrepresentative piece of land surrounded by much larger and more attractive islands of the San Bernardo archipelago in the southern Caribbean Sea. 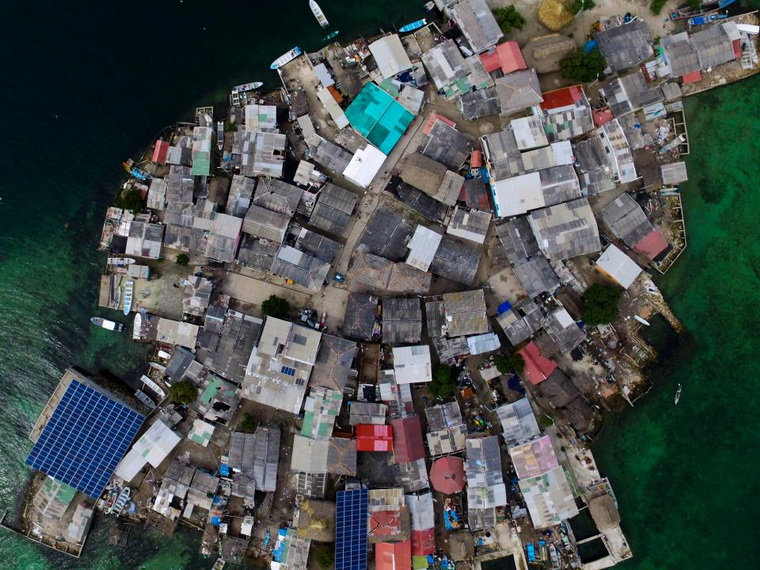 Santa Cruz Island is an amazing place. There is no water, no sewage, no cars, even the electricity is on a schedule. There is also no crime, no wars, no rich and no poor. It would be more accurate to say that the entire population of the island is equally poor, to one degree or another. A total of 1200 people live here. 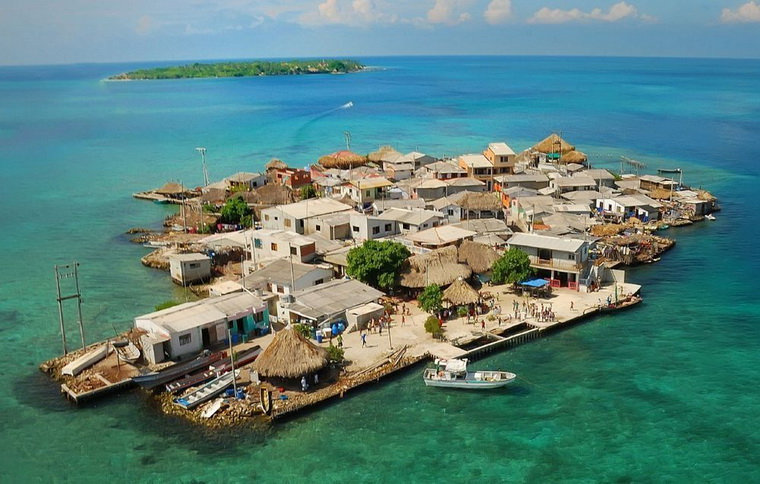 Where is Santa Cruz Island

Santa Cruz is located in the heart of the San Bernardo archipelago between the islands of Tintipan in the northeast and Mucura in the southwest. The distance to the coast of Tintipan Island is about 450 meters, and to the shores of Mucura Island about 1100 meters. The shores of Colombia are about 20 kilometers to the west.

Legends of the island

Legend has it that about 150 years ago, a group of fishermen from the coastal town of Baru (about 50 kilometers away) were looking for new places to fish and found this small coral island. Since it was too late, the fishermen decided to set up camp and spend the night on the island. A pleasant discovery for them was the absence of mosquitoes here, which is quite rare for these places. The story goes that the men slept so peacefully and peacefully that night that they decided to stay.

Thus a fisherman’s settlement appeared on the island. In those days the island had no name. 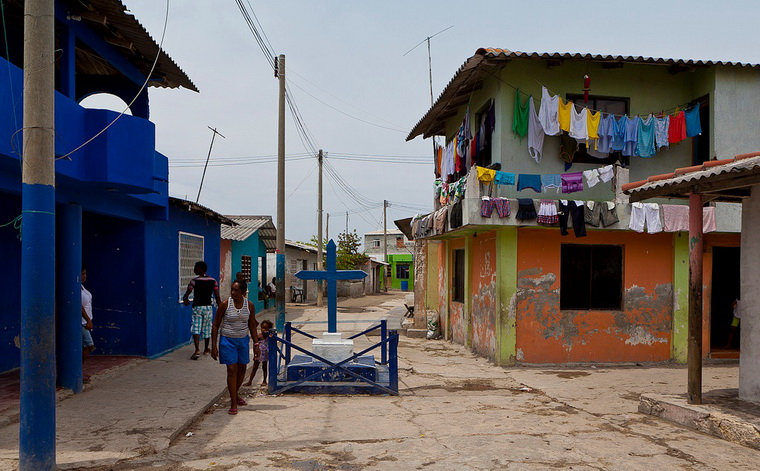 The cross in the center of the island

How do you live on Santa Cruz Island

The surrounding waters proved to be rich in fish, and so the settlement began to grow. Fishermen brought their families and friends. Now descendants of those fishermen live on the island. A total of 45 families live in 97 homes on the island. 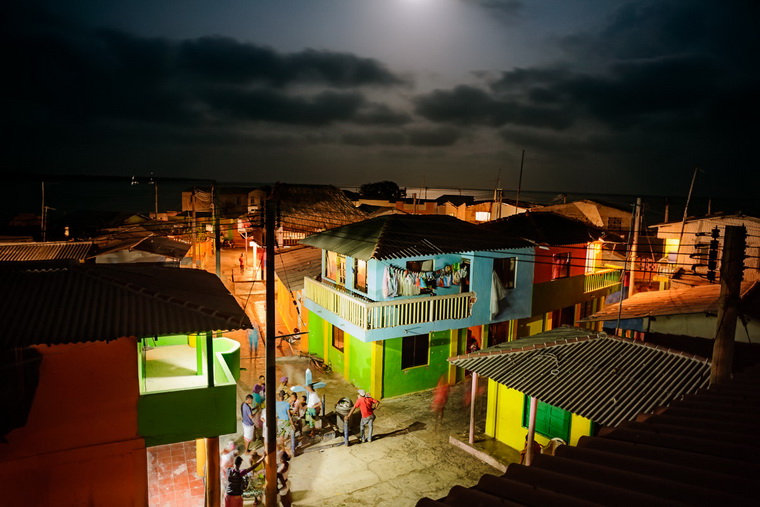 Originally, the island was smaller, but the growing population demanded more space. To expand the island, they used everything they could get their hands on, seashells, coconut shells, tree trunks from neighboring islands, sand and even garbage were used for further construction. Many structures now extend beyond the island into the sea and are held on stilts. 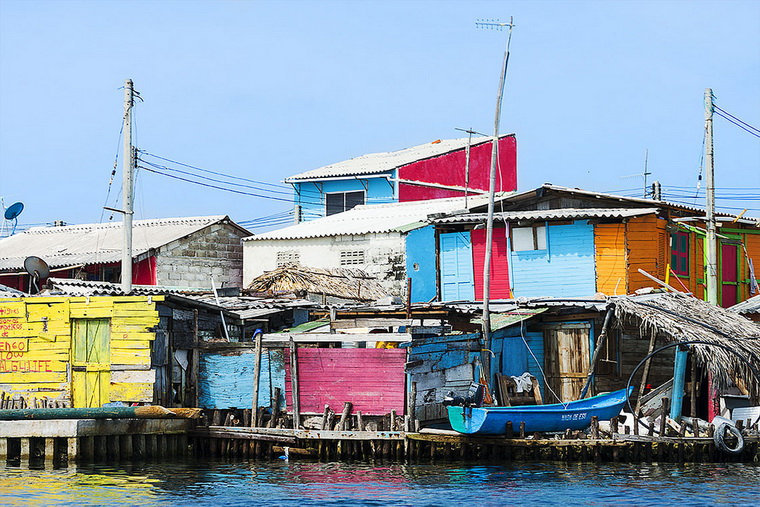 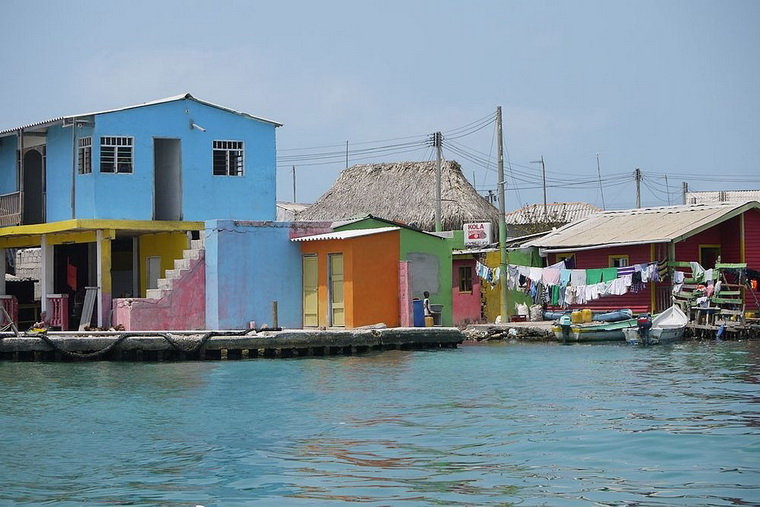 Living conditions here are far from ideal. Electricity is supplied from 7 to 11 pm from a generator. There is no source of drinking water on the island, fresh water is delivered from the continent by the Colombian fleet once a month. In addition, locals usually collect rainwater.

There is a restaurant, a discotheque, a couple of grocery stores and a school. There is a medical center where a doctor sees the locals several days a week.

Fishing used to be one of the main occupations of Santa Cruz Islanders. But now more and more locals are working on nearby islands, in luxury resorts or in restaurants.

There is absolutely no crime on the island, so often no one closes the doors. Most residents consider their lives to be quiet and measured. Even the children are described by the teacher as “obedient” and “disciplined”. 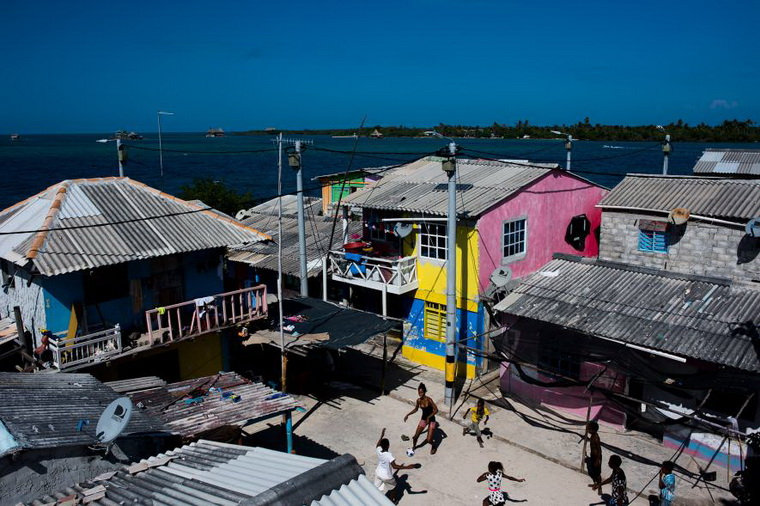 It is not unreasonable to learn about Sipadan Island and Saona Island. They differ from Santa Cruz Island in their complete lack of a permanent population

How people live on the most populous island on our planet.

The area of Santa Cruz del Islet is two soccer fields. Live on this piece of land in the middle of the Caribbean Sea something like 1200 people. Santa Cruz del Islote might have come from a book by Gabriel Garcia Marquez. But it exists in reality. Photographer Charlie Cordero traveled off the coast of Colombia and shows viewers how the poor but happy islanders live. 18 families. 97 houses. There’s a school, a restaurant – aka the port. And a small square with a cross in the middle. There is no crime, but there is an active street life: younger children play active games, teenagers in tattoos listen to Spanish rap, and adults hide in the shadows, talking about boxing and cooking. The younger kids enjoy playing in the sea and organizing swimming competitions. A game of dominoes and some beer is the type of party here. Sometimes, however, it drags on for two or three days – to rum, champeta and valenato (a dance and folk music genre, respectively). Young people make up about 65% of the population. People literally live by the sun – much depends on solar panels that provide electricity to islanders. The Internet has made young people more aware of the world, and, contrary to what adults think, many plan to leave the island to build a life on the mainland. READ
The Yungas Road of Death in Bolivia Santa Cruz del Islote might have come from a book by Gabriel Garcia Marquez. But it exists in reality. There is a medical post on the island, where a doctor visits the local population for several days a week. Regardless, the locals say they don’t feel poor because they don’t have a lot of spending money. The island’s economy is based on fishing and services, including cleaning, cooking, and tour guide assistance, which locals provide at luxury hotels on neighboring islands. There are some bad points: the island has no clean drinking water or sewage, nowhere to throw garbage, and the area is polluted. Waste management programs and environmental stewardship are being implemented. Children are playing soccer on a makeshift field despite the fact that the sun is blazing (+40 ° C). Meanwhile, the girls are playing cards in the shade. Life never stops here. Children learn to swim at a very young age and they often meet near the beach trying to catch fish. 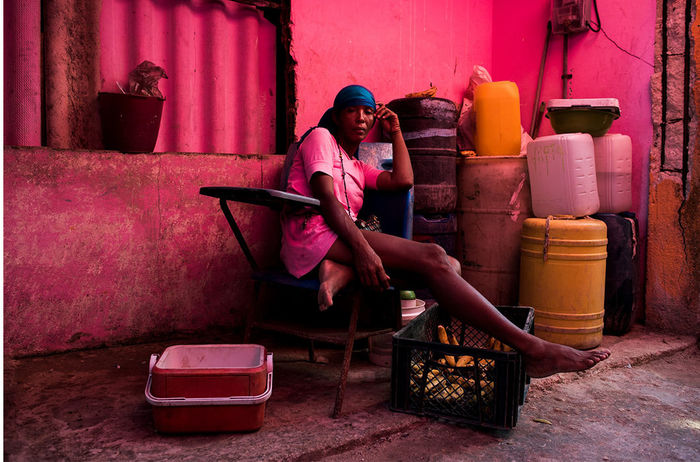 Lucero, 29, is one of the best stylists on the island. She spends a lot of time helping the girls with their hair. 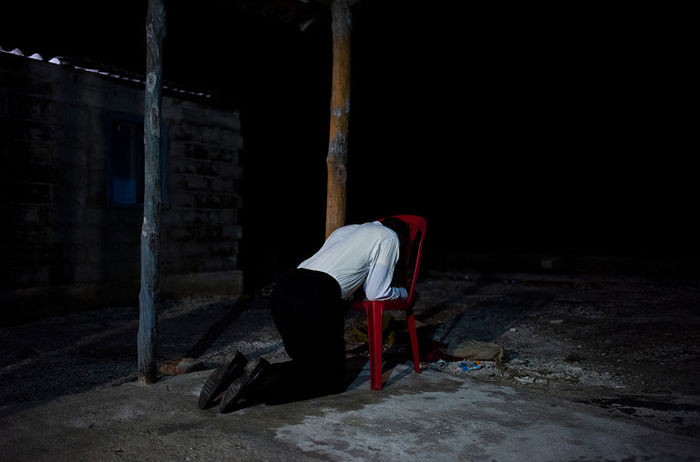 The patroness of the island is Virgen del Carmen. on her Memorial Day, processions go around the island and people ask her for a better future.

It smells American, I don’t give a fuck what size soccer fields are, give me the size in square meters.

No crime on a slum island? Reely?)

What about cats?! Any cats?

Hmm. Tight? I don’t think so. In a 10-storey building with 6 entrances an average of 600 people live.

It’s all so bright and colorful and warm. I looked outside, it’s 25, gray-black and white. I’m gonna go get drunk.

Oooh, I can ask for a bright future like that too. Ichthyander in the porcelain abyss.

How long does it take for degeneracy to become apparent? Aren’t they intermarrying-breeding?

On two soccer fields, 1,200 people can only sleep a meter apart. You need at least 20 times as much space.

How annoying is the American way of measuring the area – “soccer fields”.

Even the federal TV channels started using such measures of area.

Next we’ll hear about distances in feet and temperatures in fahringates.

A worker in the Colombian city of Medellin, the province of Antioquia, with the help of persuasion rescued the sloth, who had climbed up on the high-voltage wires and could not come down on his own. This is reported by Ruetir. 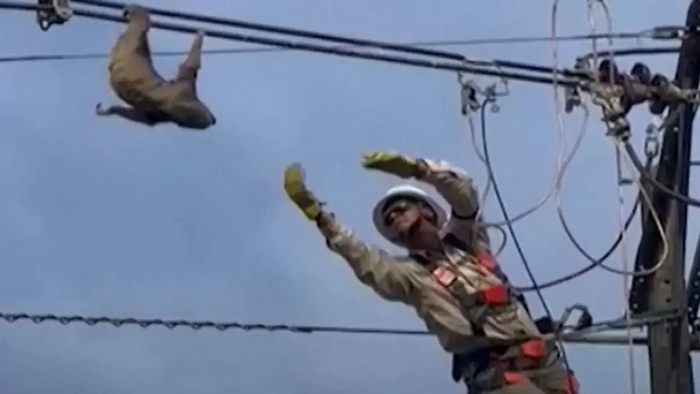 38-year-old worker Victor Hugo Lopez was called to perform an atypical task. It turned out that the sloth had climbed onto a power line pole, hung from the wires and was unable to get down.

It is unknown how the sloth ended up in the wires. As a rule, they are very slow and lazy animals.

When the man did not effortlessly climb up, the sloth looked frightened. The Colombian tried to reach for it, but the animal moved away.

The man continued talking calmly to the sloth. He said he was here to help the animal and save it, so the sloth would have to trust him and then he could bring it down. As if he understood the man’s words, the sloth began to approach him. Lopez held out a broom so that the animal could get a grip on it.

It took about twenty minutes for the animal to come down. The sloth was not injured as a result of the incident and was immediately released.