Sarmysh is a gorge in Uzbekistan 30 km from Navoi; petroglyphs (images) are located in the Karatau mountain range.

The Sarmysh Gorge is located in the Karatau mountain range, in Uzbekistan. It is a place that fascinates with its mysterious and majestic beauty. Natural stone terraces sloping down the steep slopes, numerous piles of arches and grottos of crystalline schist – all this creates a sense of another reality. It is not only the amazing beauty of nature that attracts tourists to these mountains. Sarmysh became famous as the largest stone “art gallery” on Earth.

The vast area of about 20 square kilometers has preserved a unique historical and cultural complex of the ancient epochs. The rock paintings themselves are not very rare. They can be found in different parts of the planet. The accumulation of such a number of paintings in the Sarmysh Gorge, made sequentially in different epochs, has no analogues in the world.

This amazing find was discovered by chance in the late 1980s. Those times are characterized by a general heightened interest in ufology. The residents of the districts adjacent to Sarmish were no exception and claimed to have repeatedly witnessed UFO flights and even crashes in the area. A group of researchers set off in search of traces of mysterious flying objects. Although no traces of UFOs were found in this region of Uzbekistan, the results of the expedition were impressive: many ancient petroglyphs (images on stones) were discovered in the Sarmysh Gorge.

Sarmysh petroglyphs amaze with the variety of subjects, techniques and styles. Some images are carved on the surface of black shale. Others were painted using a mixture of ochre and grease. The researchers claim that each petroglyph in the gorge is unique: none of the four thousand images is repeated twice. “Gallery” of Sarmysh is a kind of encyclopedia of lifestyles, beliefs, rituals and ceremonies of ancient people.

Scientists have identified differences in the time of creation of various drawings. The oldest ones, depicting mainly hunting scenes, date back to the XIX millennium BC. The most recent, dating back to the Middle Ages, recreate scenes of everyday and ritual life, depicting rulers and armed soldiers. Some later petroglyphs bear Arabic inscriptions describing the life of dervishes.

Some abstract pictures have not been interpreted yet. Perhaps these ancient signs have a religious or cultic meaning.

The most mysterious among the petrographs of Sarmysh are the ancient images of two-headed people in strange suits resembling aliens in spacesuits. Some ufologists claim that these images are a direct confirmation of the ancient legends about “people descending from the sky” and the modern stories of local residents about UFOs. It is likely that even in ancient times, aliens showed increased interest in these places, and ancient artists witnessed visits to Earth by alien visitors.

Opponents of this theory interpret the two-headed human figures as images of rulers, considering the second head a symbol of power, a kind of a royal crown.

It is difficult to say which of the researchers is right. The study of the mysteries of the Sarmysh canyon is still going on, and it is possible that new original theories and hypotheses will appear in the future.

Sarmysh canyon on the map

Sarmysh – are quarries, mines, ancient settlements, burial mounds, crypts and rock paintings of them all about 4000 fragments.

Galleries of four thousand rock drawings from the Stone and Bronze Ages adorn the cliffs of the Sarmysh Gorge, which cuts through the mysterious Karatau mountain range on the southeastern edge of the Kyzylkum Desert in Uzbekistan. The unusual sight of these mountains, wedging with their dark ridge into the ochre sands on the way to the Kara-Karga Pass between Navoi and Nurata, already from afar alarms the attention of the most experienced traveler, promising to meet with something unknown before.

READ
What to see in Montenegro on your own

Sparkling in the sun, geometrically regular peaks – cones of ancient volcanoes – are encircled by measured, as if man-made, stone terraces with overhanging eaves. Up close it is a black medley of rocks, arches, and grottos made of crumbled crystalline schist. Only along the stream, snaking at the bottom of the gorge, grows prickly shrubs and small trees. The air here is pristine clean and the cold river waters are fed by numerous springs, continuing since prehistoric times, when the beginnings of human culture emerged in the local oasis.

Scientists link the phenomenon of Sarmysh with the boundary of the Neolithic and Bronze ages. The abundance of water and successful hunting of mountain goats, deer, mouflon and wild bulls, which came to drink water from the desert, plenty of caves suitable for wintering obviously made the life of ancient people relatively impoverished and prepared conditions for transition to sedentary life, development of agriculture and metal processing. Primitive cults, apparently, at the same time began to transform into a religious worldview. 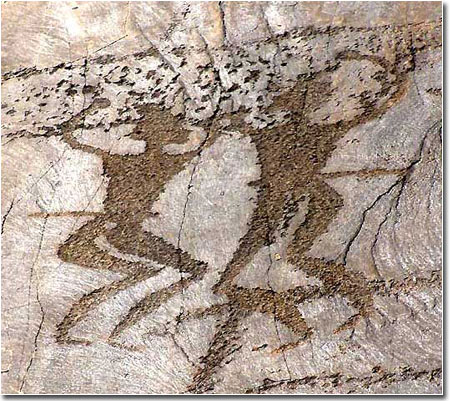 Petroglyphs (from Greek – petros – stone and glyphe – carving, engraving) are ancient pictures, carved on walls and ceilings of caves, on the open rock surfaces and separate stones.

Numerous petroglyphs vary in their subjects, style and technique. Some of them were drawn with ochre, while others were carved on the mirror-like surface of shale rocks, probably with the help of metal tools. The oldest drawings, dating from about the ninth millennium B.C., reflect the world of primitive hunters surrounded by potential prey or hostile predators.

Later, ritual scenes and scenes of everyday life appear, as well as domestic animals: dogs, sheep and camels, among which, incidentally, there are also three-humped ones. 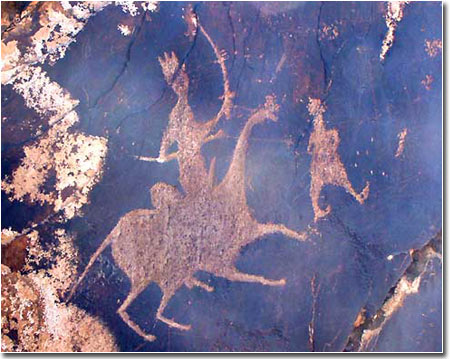 Abstract figures are also depicted, but their origin has not yet been interpreted. Probably they are cult or religious symbols. They are followed by drawings of the historical Sak-Scythian period, armed warriors and rulers. And finally, there are inscriptions in Arabic script of the XII-XVIII centuries, when the tract became a refuge for Sufi dervish communities and a pilgrimage place for their followers. Researchers claim that among thousands of petroglyphs of Sarmysh it is impossible to find two identical ones.

The greatest curiosity of tourists visiting Sarmysh on the routes of the tourist company “Uzbekistan for You”, according to specialists of this company, are drawings of “aliens”: human figures, as if dressed in spacesuits, some even with two heads. In the early 90-ies of the last century, at the time of mass passion of post-Soviet residents for UFOs and mysticism, in ufological publications were numerous publications of “witnesses” of flying saucers over the desert Kyzylkum, and especially in the mountain Bukantau. Ufologists, of course, did not fail to connect this excitement with petroglyphs, in their view, confirming that the area has been visited by aliens from outer space since ancient times, which was “recorded” by the authors of the rock paintings. 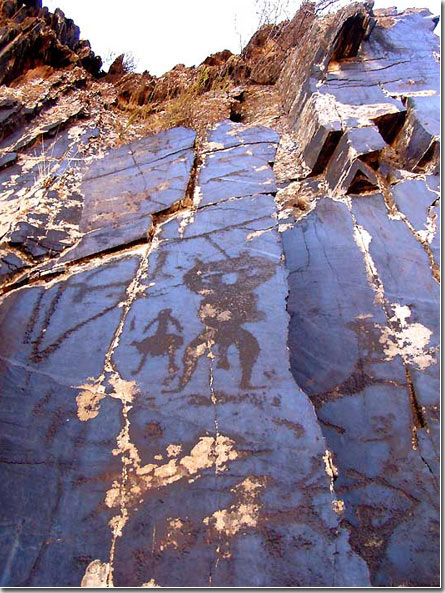 However, the unusual images on the rocks of Sarmysh may have a much more prosaic interpretation. For example, the “alien in a spacesuit” with two heads, in addition to other features, has clearly emphasized sexual characteristics. In primitive and ancient cultures, such an exaggeration of masculinity is traditionally associated with depictions of tribal leaders, heads of clans or priests. The hypertrophied phallus in this case is a symbol of power. The chief has many wives, many children, he is literally the father of the people. The “two-headed suit” crowning his figure may be a depiction of a crown or a royal crown, executed with the degree of authenticity for which the stone or bronze cutter of the ancient painter was capable. 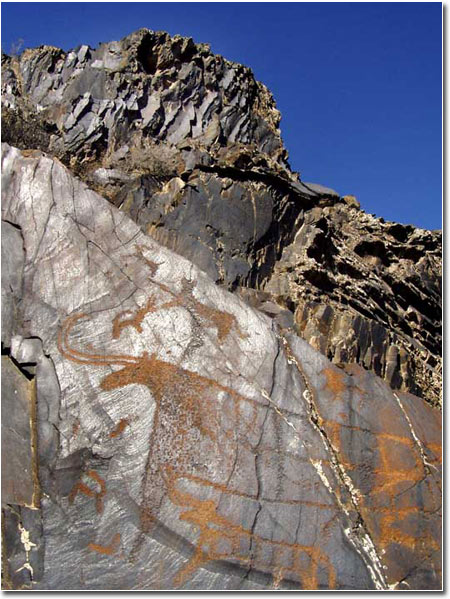 In the photo of the “two-headed alien” taken by the correspondents of the Fergana.ru news agency, a quite “humanoid” friend can be seen next to the “alien”. Most likely, the petroglyph depicts a tribal leader with his wife “queen.

However, ufologists and mystics have every right to read the story and believe in miracles. Especially since the anomalous and simply unusual phenomena are really not uncommon in Karatau, where there are rich deposits of rare ores, many underground sources, an extremely difficult terrain and a special microclimate.

This area is full of mysteries, sometimes frighteningly mysterious. But the most attractive thing in the Sarmysh Gorge is, nevertheless, that even today it looks almost the same as it was at the dawn of civilization.